Things Look Better In The Morning

I didn't mean to sound mysterious yesterday. I was feeling overwhelmed and needed time to sort out my thoughts before blogging. Today I'm trying to put everything into proper perspective, so here's what's happening. 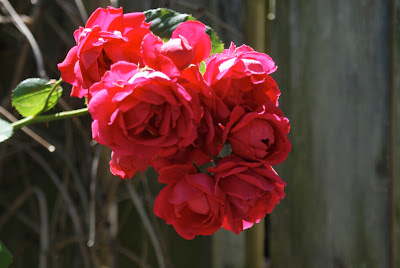 Let's start with Miss Lola. She discovered how to get around the soft headress to lick her sore toes. I had to switch her to the hard plastic type that creates problems for the rest of us when she rams it into us. 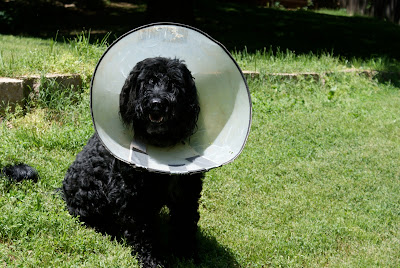 It has done it's job and is protecting the toe. The swelling seems to be down a bit today, though the toe is still two or three times it's normal size. 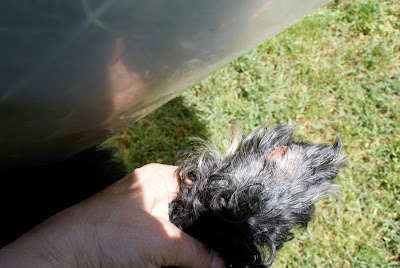 Lola isn't about to sit on the sidelines and watch the others play. She's a determined girl and joins right in the game. 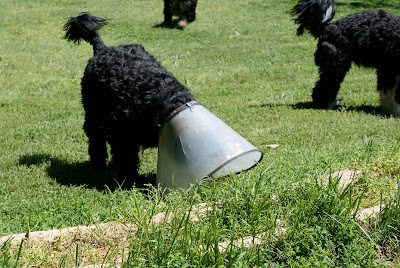 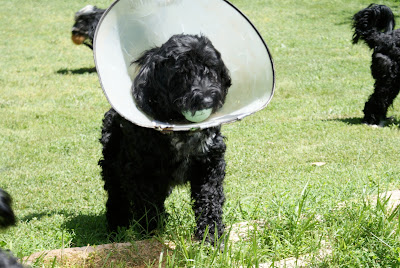 She's being very good about the new routine of soaking her foot and having medicine applied. All my dogs take pills nicely, so that isn't a problem either. We're hoping to see more improvement over the weekend. If not, we'll be visiting Dr B on Monday. 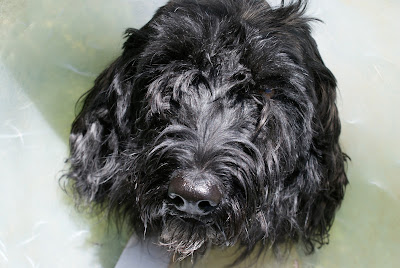 On Monday afternoon Samba and Morgan had their six month checkups. For the most part Samba's was good. Her weight is perfect, her foot has healed and she has good use of her jaw. We discussed cutting back on her prednisone slightly and will start that in a month or so. Dr B drew blood and sent it off to the lab and he did a urinalysis. Even though she drinks cranberry juice every morning, the ph level of her urine was still a little high so he sent a sample to the lab.

Yesterday morning I got the lab results back. Her bloodwork was good. She had some highs and lows, but they could all be explained by her prolonged steroid use. The lab said that the urine sample was contaminated so Dr B needed to draw urine directly from her bladder. The best way to get a first morning sample was for Samba to spend the night at the hospital so the sample could be drawn this morning before she hit the grass. 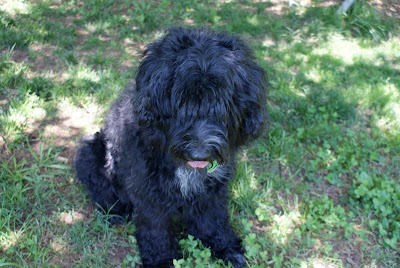 Samba and I have only ever spent two nights apart. The first was when she was a tiny pup and Rob was here with her. The second time was when we met Fudge's plane in Kansas City. Our neighbor took care of her then. As much as I complain about her waking me each night to go star gazing, I was as unhappy as she was about last night's sleeping arrangements. She greeted me with a big hug and sloppy kiss this morning after the procedure and is now sleeping on  my feet.

Then there is Morgan. 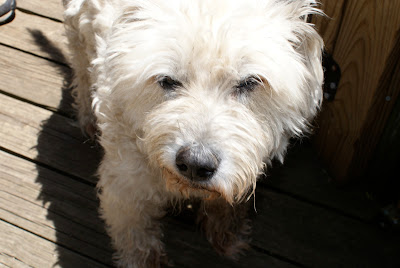 Morgan is 12 1/2 years old now and is slowing down. Her checkup was mostly good. She has several cysts on her back and her head and she has a fatty tumor on her side. None of these present any real problem. Her knee has healed well and she has only a slight limp. Her eyes are a problem. A few years ago the color faded in Morgan's iris in both eyes. They look strange now, sort of a clear gray. Her eyesight wasn't as good as when she was younger, but whose is? This time, however, the doctor saw almost no pupil response. We know she can still see, at least a little, but we don't know if that will last. I know that dogs adjust well to gradual blindness and Samba, Fudge, Rob and I will all stay close and help her get around, but it makes me very sad.

Then the other shoe dropped. Her blood work looked great with one huge exception. Two of her liver enzymes had syrocketed. The doubled from just six months ago. To understand this you need a little background. When Morgan was three years old, she had a reaction to an antibiotic and suffered liver failure. She was in the hospital for two weeks on IV fluids and we didn't know if she'd survive. Obviously she did, but not without damage. 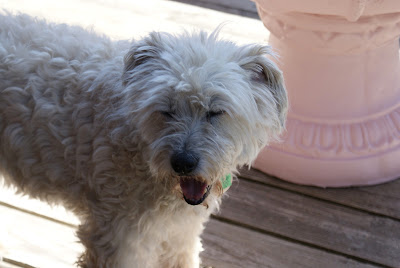 We've known since then that Morgan had liver disease, but over the past four years she's gone into a sort of remission. The enzyme levels came down to almost normal and she showed no signs of the disease. The doctor felt she could live another three years and we were thrilled. 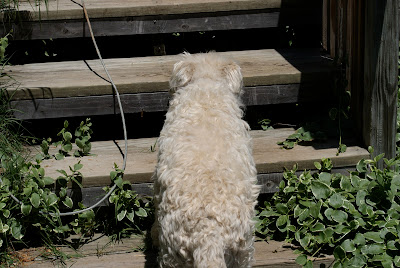 Yesterday it was obvious that the disease is active again and now the doctor is talking about keeping her happy and comfortable for another year. We're going to start her on a medicine to try to slow the advance of the disease, but I still felt as if I'd been kicked in the gut. To lose Morgan so soon after Tsar is just not something I can even think about right now.
Posted by Sue at 3:45 PM

Hugs, hugs, hugs... and more hugs on top of those.

We'll lean on each other, eh?

You have reason to be unhappy, and yet your attitude is positive. Sending good thoughts to you and your girls.

Glad to see you can still play fetch with the cone

Well, sugarfoot! We're so very sorry to hear about Morgan's liver issues. We hope optimal diet and medical treatment will keep her around for those extra 3 years. It could happen. Just look at Wilf the Wonder Pon in France; he was given a couple of weeks to live about a year ago, and he's still here. Dogs can adapt to sudden blindness as well as to gradual. Mama had a rescue dog many years ago who went suddenly blind - HW treatment. He adapted in less than a week and did well for years. We're confident with the help of her family, Morgan will manage that aspect of her changing health with grace. We'll be keeping our paws tightly crossed for her.

Glad to hear Lola is improving. Maybe one of those ground-nesting wasps got her. We have those here and they're vicious. Much as Jed hates it when he has to wear the hard plastic Cone, he does find that it effectively gives him Bloodhound 'ears' in that it's really good about trapping and magnifying scents when the Cone is firmly planted on the ground.

We're keeping you in our prayers.

So much on your plate! It just has been a tough round of illnesses for you. We hope Morgan can fight back and be with you for a long time. You are such a super mom we know you will do all you can for her and the others too. Hugs to you from all of us.

Poor Morgan...and poor you! That's a lot to have going on all at once!

Talk to your doctor about giving her Milk Thistle. Suppose to be a great supplement for liver support.

We echo the comment above ours! You are such a great mom to everybody and you have been through so much lately...we are sending along lots of hugs and prayers too!

Go Lola, go. Mugsy was the KING of punishing the humans for putting the "hat" on him... I threatened to go to the local sporting goods store and buy shin guards.

I'm glad you and Samba were happily and quickly reunited.

Paws crossed for all. Hopefully Morgan can keep on keeping on with tender lovin' care.

My heart and head are both aching with these problems! If anyone can take care of these things, I know that you can. I so much admire the way you take care of your pups and treat them, you will be able to get through these things, especially Morgan. Just keep telling us how they are, we don't get tired of hearing, and we care about your dogs.

And you, we care about you and Rob.

Jo, Stella, Zkhat and you know who!

You have our total sympathy and support. We're sure Morgan is still loving you and enjoying life so take her lead. Hugs to you all and remember we are here to share the load. No worries, and love, Carol (and Stella and Rory)

Oh Sue - I'm so very sorry. Wish I was close enough to drop in for a cup of tea, some knitting and hugs. I'm glad that Samba was a trouper and you two were quickly reunited.

it just sucks when your dogs get old.

we had quite a toe scare with Baxter last winter when one of his toes swelled up to double its size. the vet aspirated it and sent it to a lab who thought it was a spindle cell tumor (aggressive cancer) but needed a biopsy to confirm. a toe biopsy = surgery = a lot of money. but we did it. the vet said he would probably lose his toe. dogs can do fine without that particular toe. whatever. so the biopsy was done, send away for analysis and came back as an infection. an INFECTION that can be cured with antibiotics! not cancer. no toe amputation. a stupid infection, which was cured with antibiotics and it cost a huge amount of money, not to mention the torture of Baxter having to endure surgery and the worrying that the human did. we know you understand.

so the moral of the story is - i don't know what. but the toe that was a big deal,and turned out to be a very small deal.

I am so sad about Morgan. I know you will make sure she is happy and pain free. Her vision loss shouldn't be a problem with all the guide dogs for her to choose from.

Hope you figure out something that helps!

Oh, Sue... It's tough when our little ones are not doing well. Just a thought- have you thought about a holistic vet? We took Tara to one a few weeks ago, and while there was nothing she could to that would replace chemo for Tara's cancer, she made some changes to Tara's diet and gave us some supplements, all with the purpose of helping her body combat what was going on inside. I am not changing her to that vet for all veterinary care, I just look at it as though she in a nutritional consultant. I have no idea what they could give Morgan to support her liver, but it might be worth a visit. Sending lots of hugs your way, and belly scratches for your whole gang.