Calder and Norris were very close. We think they may have been brothers who lived together their whole lives. Since the death of Stanley, they became even closer. On Monday afternoon Calder died. He hadn't been sick so we were all surprised, especially Norris. Since then I've become increasingly worried about him. He hasn't eaten, just sits on the top perch calling for his friend and looking all around. This morning when we uncovered him, he started calling for Calder again and we made a decision.

We were one of the first customers at the pet store this morning and took some time to pick out Calder's new friend. I chose a mostly white bird who seemed pretty active. I had only planned to get one bird, but the white one had a little yellow friend that stayed close to him at all times. So, of course, we got them both. 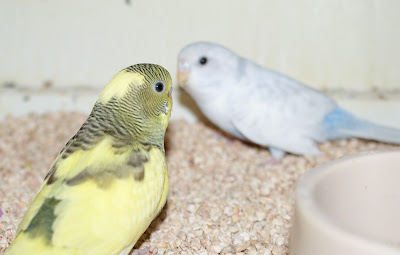 They squawked all the way home, but they're now sitting quiet as statues on the floor of the cage while Norris quietly observes them from above. If this goes as usual, they'll sit there for the rest of the day and possibly tomorrow before they all decide to check each other out and start getting used to their new home and family.

Oh, I hope they will be the best of friends! We had a similar experience with my daughter's mice. They were an adorable bonded pair. Pepper passed away last week and Esmerelda, the remaining mouse, was so depressed. We adopted a new mouse this weekend and they are getting along really well and very happy.

Now you are making Mom want to think again about getting a canary:) Welcome to your two new beautiful feathered friends.

We hope they all accept each other and become friends. And good for you for taking both birds.

I think you made a wise choice. All animals mourn. Your eased her suffering and hopefully yours

How exciting for the new birdies to have a forever home and hopefully, a new best friend!

Norri's new friends are very pretty! I hope they all become best buddies. It was so nice of you to adopt the little yellow guy along with the white one.

Oh, lookie at them! Ma has an Albino Budgie with pink eyes and everythings! And a bright green and yellow one! She too bought them togethers cause they seemed to be pals in the cage at the pet store. When she brought them home they sat in one place for a day too ~ then it was a-okay. I thinks all the burdies are gonna be besties in no time at all! They are so cute!
Kisses,
Ruby ♥