Syd went to the hospital this morning. First they did a recheck on her urine. There was no blood. The antibiotic worked. Yea!!

Then Dr B removed the growth on her lower eyelid. When we picked her up, he brought her outside to us. He was very pleased. There was more skin available in the eyelid than he expected and he was able to remove it without taking a wedge out of the lid. He says there won't be any deformity of the eye.
Yea!!! 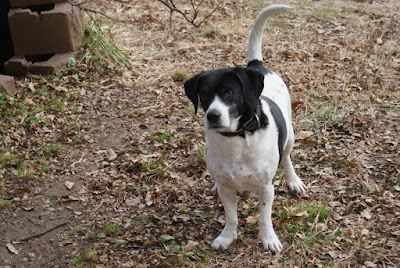 Syd has three sutures that will be removed in two weeks. Till then she's wearing a stylish plastic bonnet. She's either crashing into everything  or standing like a statue but she'll soon figure out how to move around with her hat.

She also wants to eat but doesn't think she can so for now she's being spoon fed.

This will be a long two weeks but we've done it before and we'll get thru it this time, too.
Posted by Sue at 6:26 PM

Way to go Syd. We love answered prayers. We are thrilled for all of you.

It must feel so good to get some good news. So happy for you.

so great that good news came to you!!

Yay, Syd! This is wonderful news to wake up to! I remember the first time I put the evil lampshade around Maggie's neck and she did the same thing - just stood there like a statue. She hated it!

Sorry about the Cone of Shame....but great news! You go, Girl.

OMD, that is FABulous news Syd!!!!! Sorry abouts the cone-o-shame, butts it'll be worth it in the end. Nows....I thinks this news deserves some....SPRINKLES!!!!!
Kisses,
Ruby ♥

I'm so glad Syd had a good outcome! She'll get used to her stylish hat. But she's probably enjoying the extra attention.