Last Friday Norma Jean started he meds for bronchitis. She responded almost immediately and she didn't cough all weekend. Then on Tuesday she woke up coughing. It continued thru the day and she had a very bad night, so I called Dr B first thing Wednesday morning. He said to bring her right in and leave her. He'd do a chest xray and set an appointment for the afternoon to pick her up and go over the results. 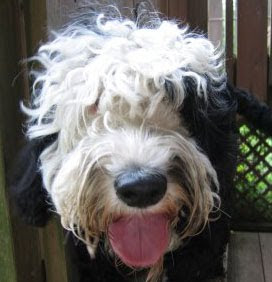 I paced all morning with thoughts of Monty running thru my head. Finally it was time to go get her. Dr B called me into the office to take a look at the xrays. He said there was good news and a little less good news.

The good news was that her lungs are clear. There are no tumors or masses and her heart looks great for her age. The bad new is something that looked like little threads running around outside her lungs. He says they are tiny little extensions of her airways that don't belong there. They can be caused by a couple of different conditions.

First is chronic bronchitis caused by seasonal allergies. The airways have become inflamed. The other is necrosis or scarring of the airways caused by age and inflammation.  Neither of us want to do invasive testing on Norma Jean due to her age so we're going to treat her with a tapering dose of prednisone for one month. At the end of that time we'll do another xray and compare the two.

So that's where we are. She's not coughing very much today but the prednisone is making her ravenous and she's begging both Rob and me for snacks. This may be a tough month living with a dog that's convinced she's starving.

Been there, done that, so says Mom. But if it helps, it's worth it as we are sure you agree. And of course, there is also the increased thirst and subsequent frequent urination. Good luck. We all hope for the best.

We have paws and fingers crossed that the Prednisone works and it is just allergies.

I think your poor pack has had every sort of illness known. We are praying she does better.

We send lots of AireZen and healing vibes to Norma Jean! We hope the prednisone works and the issue is just allergies.

Hooray for no masses! We'll cross our paws the rest clears up with some meds and rest!

Oh Norma Jean! How ya doin' my furiend! That is super duper good news abouts no masses!! WooooHoooo!!!!! I hopes the new meds help ya out, I will send you tons of POTP too, k?
Oh, and some AireZens to boot! BOL!!!
I thinks maybe some margaritas and some pupcakes with sprinkles just might to the trick, rights??? ☺
Feel betters my furiend!
Kisses,
Ruby ♥