Hi All, we're back. It's been a rough couple weeks and though I've read your blogs every day, I didn't leave many comments and couldn't find the energy to post on our happenings here at home. I'm trying to change that.

The last couple weeks have brought several new challenges. While trying to cope with the loss of Gracie to a brain tumor, we had some other health issues to deal with. Sebastian was having a vomiting problem and couldn't keep anything down for awhile. He's now eating only rice and sweet potato for breakfast and rice, sweet potato and half a pork chop for dinner. So far he's only had one day of vomiting. If we can make it thru three weeks of this, we can start adding in some other foods very carefully, one at a time. He seems quite happy with his special diet and doesn't appear to have lost much weight.

Noah has started having fainting spells, which scare the heck out of me. They only have happened, so far, first thing in the morning on our early outing. If he eats grass, he then vomits and faints. It only lasts  seconds, then he jumps up and runs to me. I've been giving him Reglan at bedtime and again in the morning, then I take him out on leash so he can't eat any grass. The vet and I have discussed it but unless it gets more frequent or lasts longer, we'll just stay with this routine.

Fudge hasn't been acting like his normal, silly self. I know his leg bothers him from his stroke last year. He's stiff when he first gets up and limps a bit in the evenings. He gets tired around nine each night and climbs up next to me to snooze till it's bedtime. I'm sure most of this is age related which makes me very sad, but we've all been thru it.

Still, summer with it's heat arrived a couple days ago and so we decided to make everyone happy with water. We set up a revolving sprinkler which at first was pretty popular, but then they didn't like it sneaking up behind them, so we solved that by setting the sprinkler in the pool. They agreed that was an excellent idea. 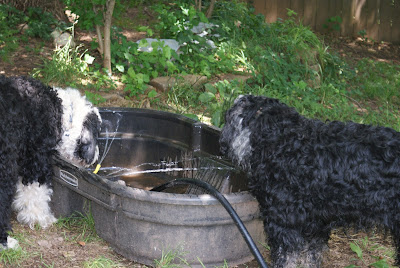 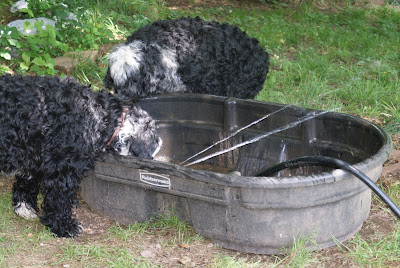 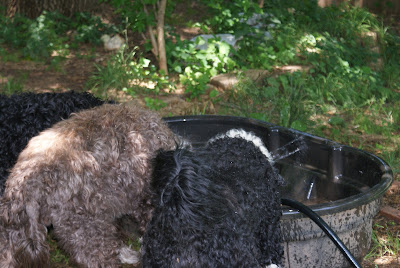 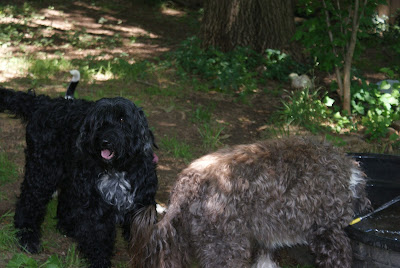 Norma Jean likes to stand over the sprinkler so the water cools her belly. 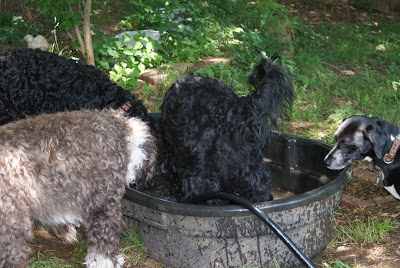 Fudge and Noah try to catch the streams of water as they revolve. 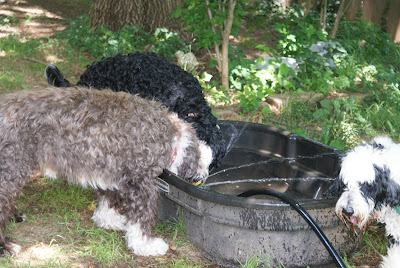 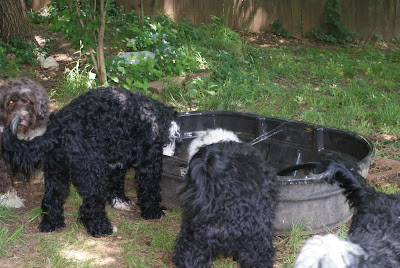 Tess and Lola jump right in, too. 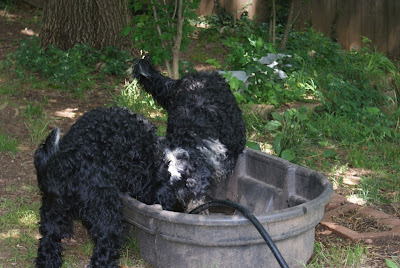 The big surprise was Mackey. I guess she considers herself a water dog. 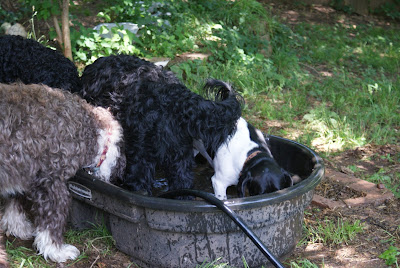 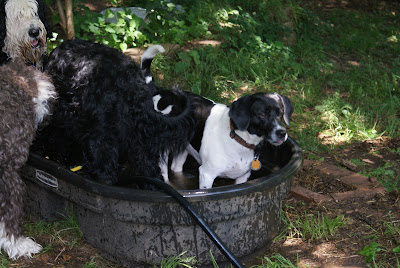 And what about the other three? Sydney prefers keeping the squirrels in the treetops. 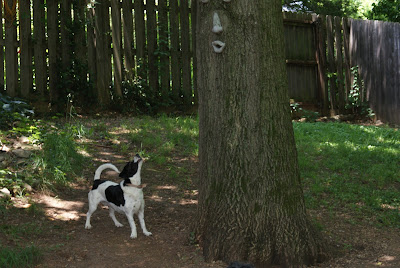 Bailey sits a safe distance away from the water and watches the others. 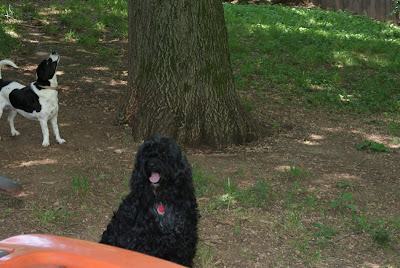 Sebastian either hides in his dog house or hugs the garage door. No water for that boy. 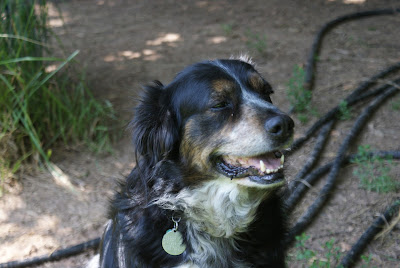 Then we all go back inside to relax in the air conditioning till next outing.
Posted by Sue at 2:24 PM

We sure hope life settles down for all and all are doing much better soon. As for water, we pass:) We like the a/c best.

Well, with all of the ailments, it's comforting to know that playing in the water is still a favored sport. I'm glad to see that Mackey is an honorary Water Dog, too.

I think it's those moments like playing in the sprinkler that give us back our sanity. Good vibes coming for your pack, that their health is returned!

Water...YAY! We don't like aggressive water, we prefer the water that stays in the river and we're in charge of how much gets on us. But looks like all the pups were having a great time. Hope Sebastian's new eating regime works, and everyone else feels good. Paws crossed.

I am sorry you have had such a rough week. Glad you are back and love the happy water pictures.

I love that Mackey thinks she's a Water Dog, but then why wouldn't she?? I have to say there's something sort of calm and sort of boring about having only one dog! But I do notice I have more money in my account at the end of each month. Am I a bad dog mom?? Otto went to the beach with his friend Wizard yesterday morning and then came home and walked with Macy Blue from CreekHiker.blogspot.com and his other THREE girlfriends. I think life is good for the Otto. Sending hugs and fun energy to all of the wportie, mixed breeds and humans at your establishment!

Gosh you have a lot going on. Sending healing vibes to all of you
Snorts,
Lily & Edward

I love the water playtime photos! Sounds like you've still got your hands full. Tut is now starting to go to bed by himself (in our bedroom) early evening, as Zeus had done as he aged. I'm getting a bit worried - he's slowed down a tun and has several new lumps.

We hope that all your guys feel better soon! Momma says it's hard watching your babies get old. She told me I'm not allowed -- I have to stay young and healthy forever. I'm working on it!