One morning, two years ago I was angry about something. I no longer remember what caused my anger, but at the time it was strong. I took the dogs into the back yard and they ran off in many directions to do whatever and I walked across the yard until I came to a rock. Because I was angry and needed to release it, I kicked the rock. 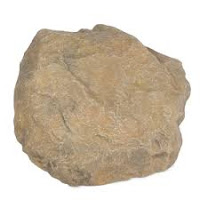 It wasn't a big rock, about the size of a softball, but it was a rock. My anger shifted immediately as the pain shot thru my foot. Suddenly I was angry at myself for kicking a rock.

I thought the pain would subside soon but I was wrong. The pain continued for days. I had mangled the nail on my big toe. It turned black and stopped growing. The toe was also at a new and different angle than it had been. 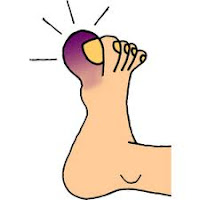 The pain continued for weeks, then months. Putting a shoe on was torture. I went barefoot in the house and if I had to go out I wore a loose shoe or slipper.

Finally, after a year, I went to a foot doctor. He treated the damaged nail and said it would take months but should heal. That was a year ago.

Today I went back. The pain is still so bad that it keeps me awake at night. He said the nail was infected and arthritis has set into the foot around and below the toe.

So today he removed the nail. When it heals in about a month, he'll give me a steroid injection in the foot and we'll discuss surgery to repair the bone. 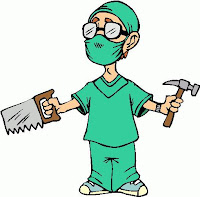 So take some hard earned advice, if you're angry, go into the yard and scream or swear or throw something, but don't kick a rock.

Ouchy!!! Our Dad had something similar happen. The podiatrist said he must have injured his big toe somehow a long time ago. The nail separated from the bed but didn't fall off. Another nail tried to grow under it, then a fungus set it, and the story goes on and on. Mom was at him for a long time to see the podiatrist which he finally did this summer. The doctor removed the top nail and he has medicine to help get rid of the fungus. We don't think he has the same level of pain as you do and we send you wishes for a good recovery. Mom says there is not much worse than a sore foot - it makes everything else seem miserable. Hugs.

Oh my. Dad has done things like that too Kicking things are always a bad idea unless they are soft. Humans need to manage their anger better. They should bark at the moon like us. We pray that the bad toes feels better soon.

Good advice! We will remember that. Hope your foot can be healed.

We are so sorry that this happened and we hope one day that your toe will be as good as new.

I try to never have a physical altercation with something inanimate, because I can only lose. I hope your toe heals properly soon.