This was one busy weekend and it hasn't stopped yet. 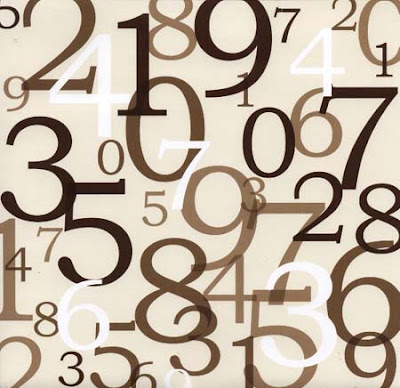 First, our pink post, the one before this one, was number 400. I never imagined I'd find enough to say to fill 4 posts, let alone 400. I had been thinking of having a contest to celebrate it, but 500 seems more appropriate to celebrate. That will give me time to think up a really nice prize or two or three. So later this year when we hit 500, be ready to join in.

On Thursday I fed the dogs early and got them settled in, then Rob and I went to see a local production of The King And I. It was my birthday present from Rob. 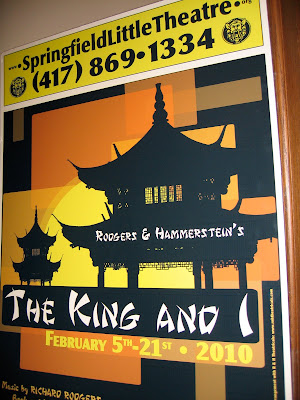 I love the play and especially the music from this show. I was a little apprehensive about seeing a local group tackle it because in my mind Yul Brynner will always be 'the King'. 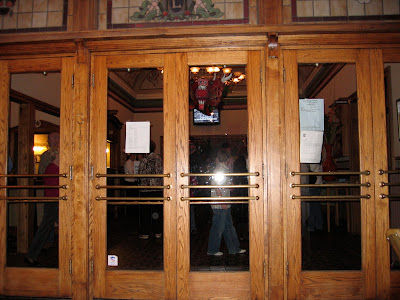 We've been season ticket holders for the Springfield Little Theater and attended many shows. I've been pleasantly surprised many times by what good performances we've seen, but this one was special. 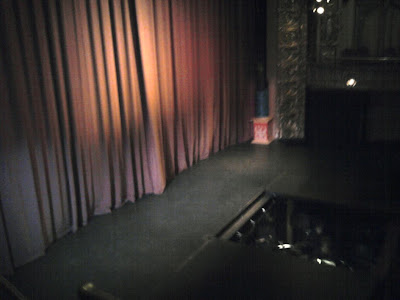 All the leads had strong voices and the king played by Derrick King was so good that he was a worthy successor to Yul Brynner. We sat in a box so we had plenty of room and we both had a wonderful time. We've been humming the songs all weekend. What a romantic play that is.

Friday was a big day. It was the day the four girls, Tess, Lola, Bailey and Norma Jean go visit Dr B for their checkups. 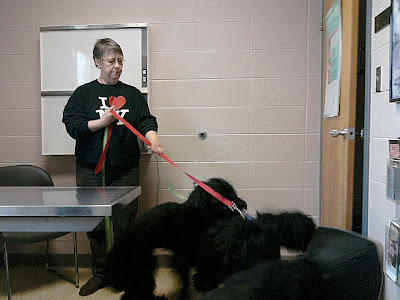 The girls get all revved up for this and are spinning and jumping and get their temps and blood pressure up as high as they can. They also get all the humans excited and our blood pressure goes up. 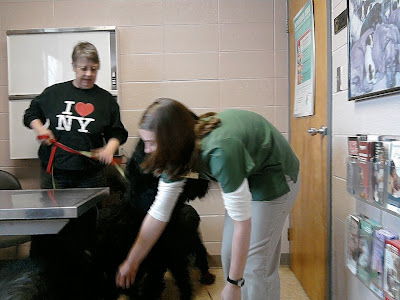 Weights were all perfect. Eyes, ears, etc were all perfect. They tried to take each of the girls to the lab separately to take their blood. That didn't work out so well. Tess, Lola and Norma Jean went along and soon came racing back to us, but Bailey went reluctantly and was gone for a very long time. Rob finally walked back to the lab and found Bailey muzzled and struggling to keep the three techs from coming at her with the needle. The doctor walked in and tried, but Bailey was frantic, so Rob brought her back and we let her hang with her sisters. 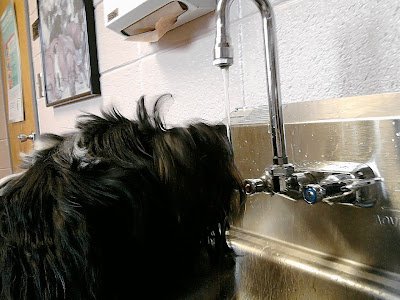 While each girl was on the table being examined, the others were playing in the sink. Rob turned the water on and they liked drinking from the faucet. 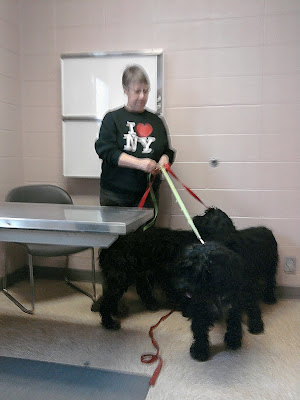 When we finished the exams, Dr B suggested we sedate Bailey and try again, but Rob suggested that he try taking blood from a back leg so that she wouldn't see what he was doing, while I hold her and talk to her. I stood in front of her holding her head with one hand and feeding her treats with the other. The doctor was able to get all the blood he needed. 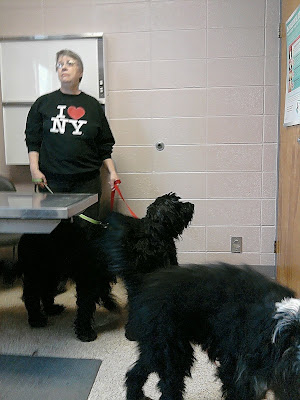 I learned from this not to split them up when they're so excited and to stay with them as they depend on me to protect them. Bailey was just trying to defend herself from people with sharp objects and once I was there to protect her, she stood still.

When they got home, they ate dinner, then they slept all evening. They were exhausted from their big adventure. The blood reports were back on Saturday and they were all perfect.

The activities continued on Saturday as Rob and Morgan and Fudge and I attended a mini-seminar on Doggy Dentistry at the clinic. I'll post more about that in my next post.
Posted by Sue at 11:34 AM

Was just thinking about you. I'm glad the girls' appointment went well.

I'm been thinking of you and missing you this weekend - maybe it was the embroidery (even if it was by machine!) that had you in my mind.

Hope all is well in your world. I'm glad you enjoyed your birthday production and that the King was worthy!! g

What a wonderful weekend you had - I love it when I take my dogs for a checkup and find that all is perfect!

And The King and I - Gary and I went to a local dinner theater and saw it last summer and were pleasantly surprised. It was a great rendition and we have a good meal.

Have you taken breath yet, what a busy weekend you had. If you fancy joining in my giveaway your very welcome. best wishes Julie.C

400 just isn't enough, i love your doggy posts, and your life with the gang, and bailey showed me that we trust those we love and will let anything happen to us as long as they are near. what a li'l darling.

Yup...I get worn out just from handling two litte dogs at the vet! Isn't it funny how you just knew, inuitively, how best to handle your "kids"? I remember that from back when the 2-legged kids were little...

Congratulations on 400 posts. At first we didn't even think about a certain # and we are now over
100. Long way behind you. Brave taking the big 4 to the vets at same time. Sounds like things went well. We were enjoying our swimming but that is unusual this time of year.
Tailwags
Ernie, Sasha, Chica

Phantom and Dakota were always so very close and Phantom was very dependent on his big sister for strength. When we would go to the vet with the two of them, he would whine and pace and whine and pace from the moment they took her to the back room until she came back. And very soon, they learned he would only go with them if she could come too:) He did get braver with time but it was quite the ordeal for him for many years.

Glad all the checkups went so well.

Oh dear and I think I have a hard job taking one little kitty to the vet. So glad that their appt went well. It is always a tense time until you know that they are fine. The King and I is one of my favorites too. Yul Brynner was the best, wasn't he?
So glad you had a good time.
x

The vet visit doesn't sound like much fun, but going with your sisters must be better than having to go on your own like I do.

I'll have to try that faucet thing next time I'm there.

I HATE to have my blood taken too and I make mom hug and kiss me the whole time! Good for you for holding out for support, Bailey! It's less scary, right?

I would have loved to see 'The King and I' What a wonderful birthday gift. Your dogs are all so sweet ♥ I'm glad all of their check ups went well. I hope you are having a good week.

I'm so glad you enjoyed the local production. I need to go to a show! I think I'll see what's showing at our local theater...

Sissy had such a rough time at the vet's two weeks ago that I've put off her check-up and we're almost at three weeks. I'm going to call today and see if Gretchen can come too, just to make the world a better place.

Glad the girls had good reports!

Sounds like a lot of good came out of this weekend, even if it was a very busy one!

Congratulations on reaching 400 posts!
That is a whole lot of blogging - we just passed 200 but didn't actually notice until too late!
What a nice birthday present - there is really nothing to beat a good Rogers and Hammerstein!
I am now singing Shall we Dance and I wasn't even there. Hopefully I have the right musical!
Glad the vet trip went well and everyone behaved.
If only our two did the same......
xxxx

Wow Sue! You're definitely very capable managing so many dogs at the Vet! I'm very impressed!

When it comes to getting to Vet the Dog Woods Pack aren't exactly the most cooperative. Suddenly their legs don't work ... and they become like a tonne of unmoveable blocks! :p

Which explains why the Vet comes to Dog Woods instead of we go to them.

T and the Dog Woods pack