Sad Day In The Neighborhood

Around 2:30 yesterday afternoon the power went out. We had planned an anniversary dinner at home so this was poor timing. Just then our neighbor drove in his driveway and told us there was a problem on the next street  and there were a lot of emergency vehicles. We thought that might be the cause of the power outage, so we went to have a look. 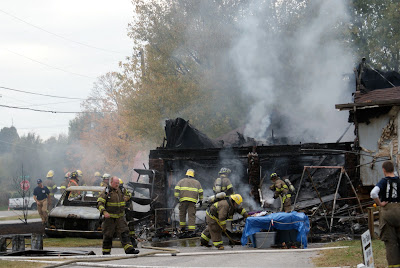 What's happening at the end of the street? 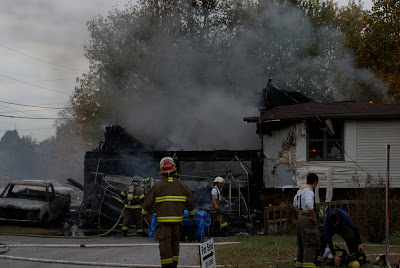 The house on the corner is burning. 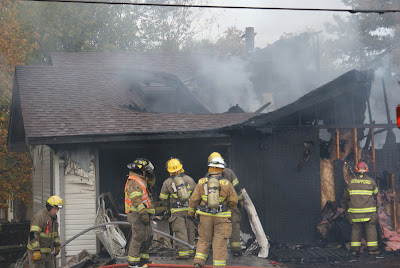 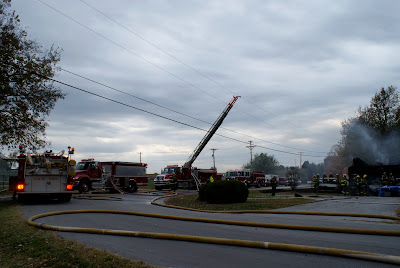 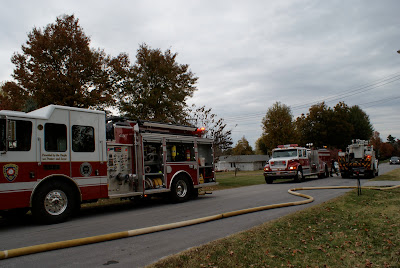 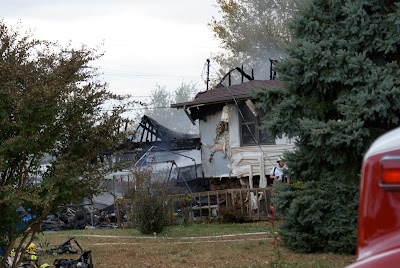 It looks like this house is a total loss. The firemen told us that this is the second time this house has burned. The first was caused by unattended burning candles. They weren't sure what happened this time. 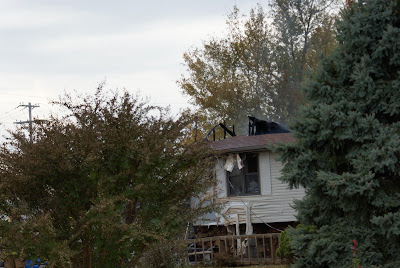 Although there were ambulances standing by, no one was injured. The firemen said that this time of year there are a lot of house fires because people are starting up their furnaces and fireplaces. It's a good time to remember to be careful with candles, too, especially when pets are around.
Posted by Sue at 10:50 AM

Oh those poor people!...I am really sad for them. Fires are terrible things...stay safe.
Sending lotsaluv
MAXMOM IN SA

How horrible for this poor family. We feel so badly for them.

Fires are such horrible things. I am glad the people are OK. Hopefully any pets they had are OK too. The rest is just stuff. Very scary.

That's really sad :o( But I'm glad no one was hurt and everyone made it out safely.
-Corbin

Fires are so scary. We hope no humans or pets were hurt at all. Hugs to all, no matter the cause.

We are so sorry. Fires are so scary. We hope nobody was hurt and no pets were in that house. Lots of love, Holly and mom

The Knight had to toss one taco on the counter as he left dinner last night, but that was just for a comparatively simple wreck. Candles and scarves over lamps start a LOT of fires.

I know this blog !
Just to make sure I am going to add me again xxxxxxxxxxxxxxxx
Sad post, very sad post..... you know by now that I don't comment on really sad one'....
You can never ever fight the elements, no mater what they are....
No holding back.... no matter what you do or try....... yet human nature is that you never ever give in..........