You may have noticed I haven't been around much lately. I have been reading your blog posts, but often not commenting. There's a reason but I was embarrassed to tell you about it. This morning I decided that I'm among friends and you won't judge or if you do you'll at least not reprimand me to my face.

On Labor Day I had an accident and injured my ankle. I've been getting around on crutches or hobbling in slow motion and since my computer is in the basement I didn't want to do the stairs. I can read blogs on my Kindle but commenting isn't easy.

So why am I embarrassed about hurting my ankle? Because it's a dog bite. No one wants to think that their sweet little fur pup that cuddles on their lap might actually bite them, but if you've lived with dogs for over sixty years, it becomes an occupational hazard. I've had bites before but they amounted to scratches or bruises, not deep punctures.

Let me tell you what happened. All morning Sydney and Noah had been snappy with each other. I don't know exactly what set them off, but they both have shorter fuses than the rest of the pack. After their dinner Rob and I had them all outside to play. When we got inside the garage the whole pack was close together and I was in the middle of the group. Noah was just behind me and Syd was at my side. I turned to see what Mac was doing and just then I felt a sharp pain in my ankle. I don't think I was the target and I don't know which one actually bit, though I suspect Syd. I don't think Noah would have used so much force.

Rob got the bleeding stopped and wrapped it up. The next morning I saw the doctor for a tetanus shot and some antibiotics. There was a lot of swelling, a lot of bruising and a lot of pain. All week I've been keeping it elevated.

This morning I saw the doctor again. He says it's looking better, but has a little infection. I'll be taking antibiotics for another ten days and keeping it bandaged. I can use hot compresses on it now to help it drain and heal. Most of the pain, strangely, isn't from the punctures themselves but from the bruising to the Achilles tendon. It will probably be a slow healing process, but it is healing.

So there you are, my dogs aren't perfect. That's a hard statement to put in print, but as much as we love them and consider them family members, they're still dogs who sometimes respond with their teeth. Sydney is on a tether again at all times. House training is progressing well and manners are also being addressed. She has to learn to respect the other dogs and that I am not her sole possession. Noah is also a jealous boy, so this is a learning opportunity for both of them.

I have some better news to report today, too. Sebastian is out of his cone and is doing really well. Here is the before  picture taken the day of his surgery. 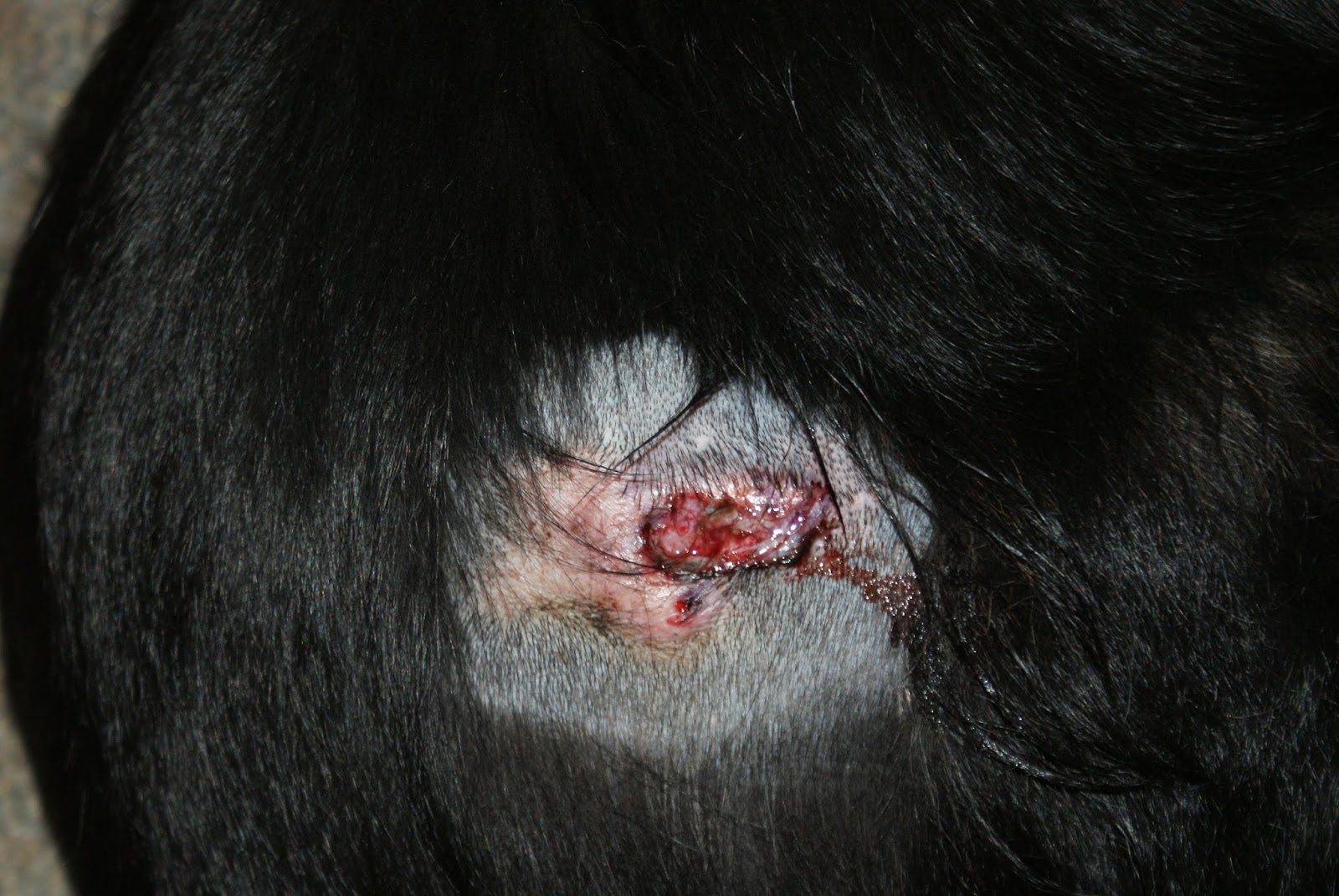 And here is the after picture. Isn't that new pink skin pretty? It's smooth, too. 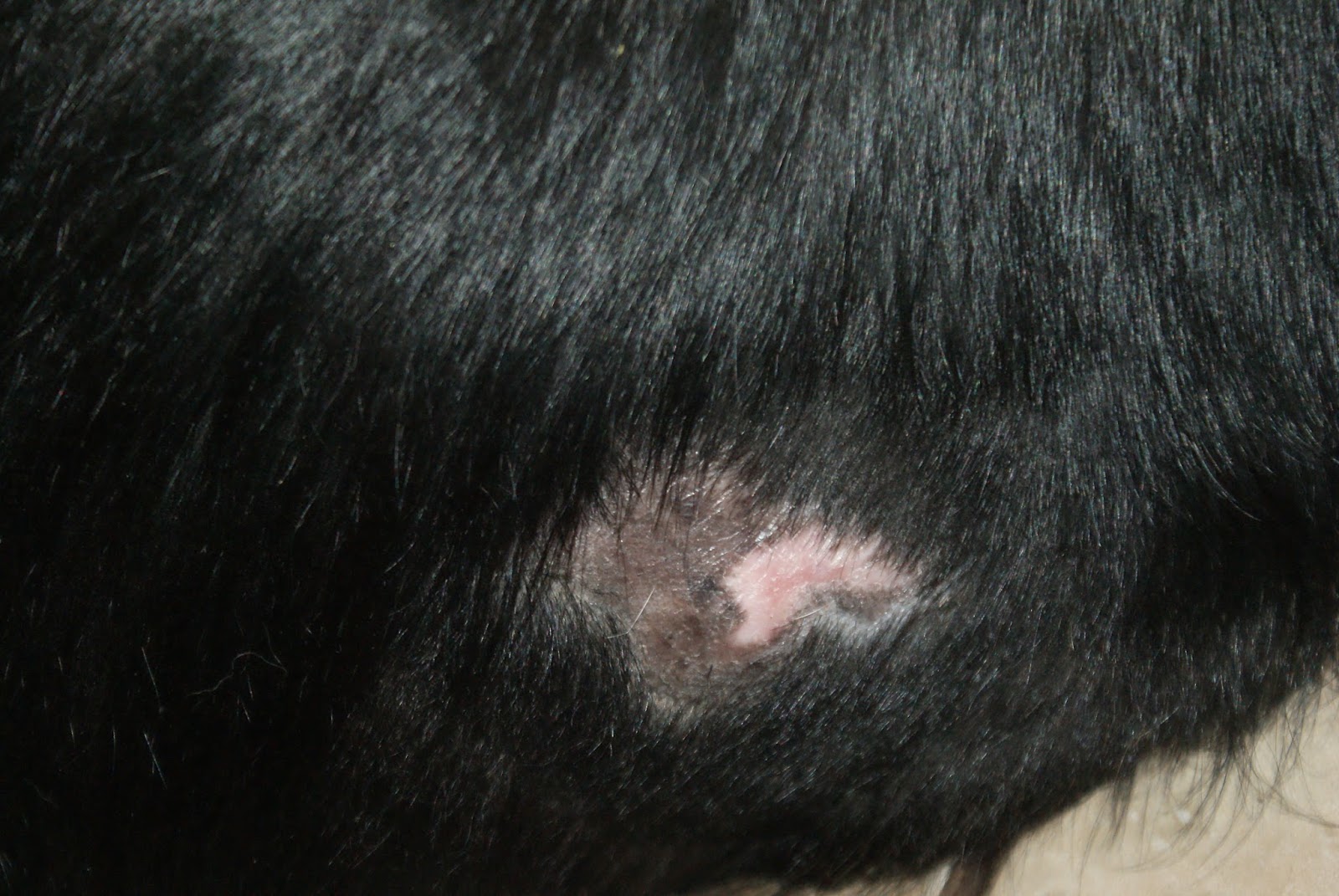 We're hoping the foreign matter came out and it's smooth sailing from here on. 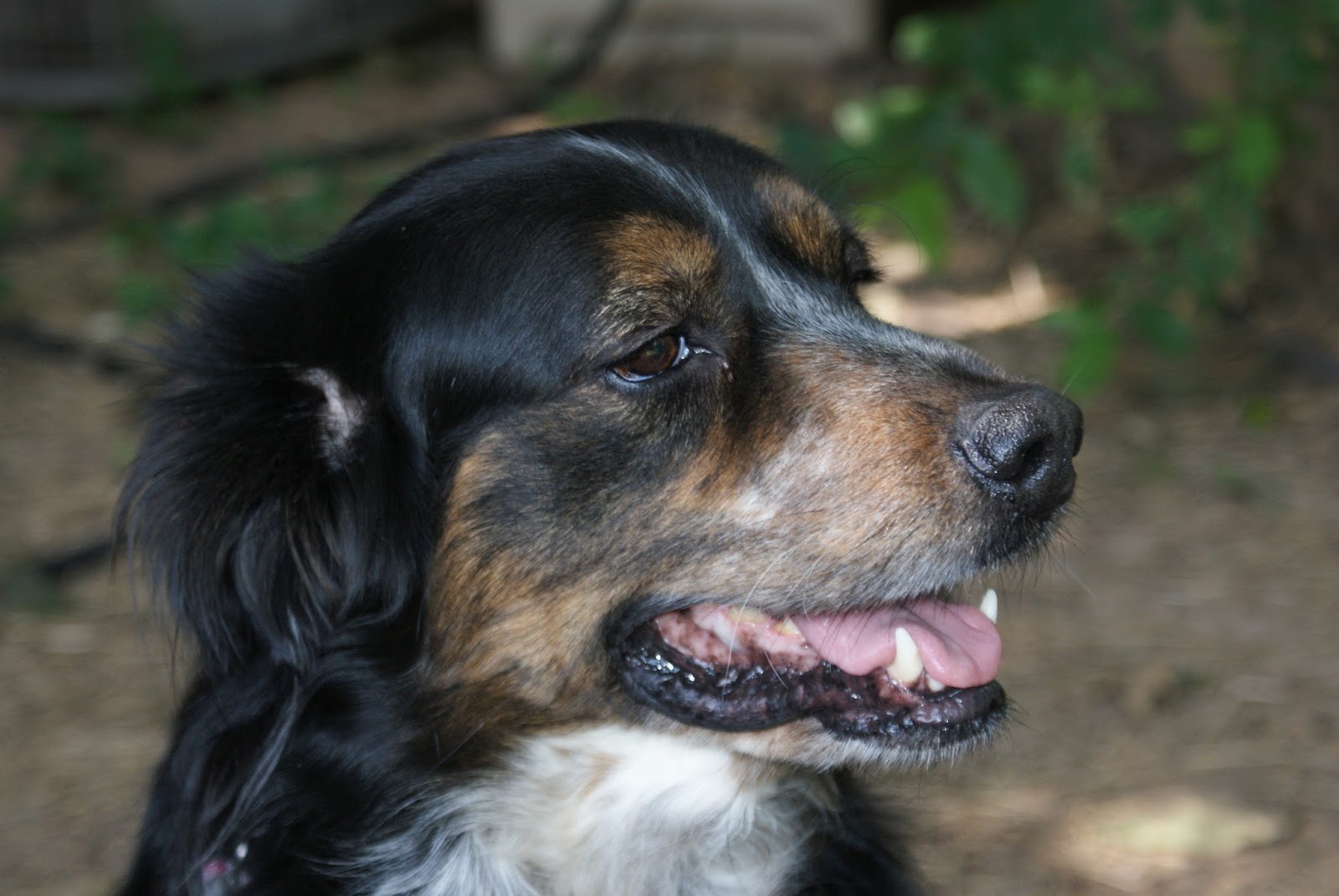 The little rotter should be ashamed of himself for biting his Mum! I was bit once by Otis the Scottie. He was next to me on the sofa, I was watching TV and running my fingers through his hair. I must have fallen asleep, he tried to get down but my fingers were stuck in a snarl and what could he do? Biting is all he knew. I've still got a nice little scar from it.

Hope you can get well soonest. Can't you move your computer upstairs for the time being?

Jo, Stella and Zkhat, (not even one of us bites so far!)

So sorry to hear about your ankle, Sue! These things happen--sounds like you were caught in the "crossfire." I hope it feels better soon and that the antibiotics knock out that infection.

Fabulous news about Sebastian! Looks like that spot has healed up beautifully!

Oh boy... and ouchie! Sorry about your occupational hazard, but we all know how it is. We're sending happy healing thoughts your way... and good girl thoughts to freshy Syd.

Sorry to hear about this but it does drive home the point that any dog can bite at any time, a lesson we should always keep in mind.

My sweet Chihuahua of many years ago bit a vet tech to the bone, her first and only bite.

Accidents happen. It doesn't make it any less sore. Somedoggy got you a good one! Bella and Roxy sometimes have blues but so far SHE hasn't become a victim.

We are so sorry that this happened, Miss Sue, and we hope your ankle feels better soon.
We are so happy for Sebastian and he does look a whole lot happier!

Howdy Mates, yep sometimes things happen butt it just means we're in a pack and we're dogs. Sorry about your injury and we have paws crossed it will heal quickly. This is a great post to remind the peeps not to leave any children unattended with dogs. Take care. No worries, and love, Stella and Rory (and Carol)
P.S. Glad you told us cause you're right, we are all friends here in Blogville and love to support each other!!

I have been bitten so many times that I couldn't possibly count, but never on the ankle! Ouch. One of the dogs that we regularly take care when his people go away bites me just about every day he is here. He is a little guy, so it isn't that bad. If it was a pitty biting me, it would be a different story and outcome.

Oh, Ma's 'other Airedale' as I like to call my predecessor ~ was playin' and bit Grandma! It looked all nasty, and Gma didn't 'talk' to her for an entire day!!
Ma has been nipped more than she can say (terriers LOVE to nip!! hehehe)
Seriously, it does come with the territory. I agree with Wrigs, I thinks you got caught in the crossfire. Nothin' wrong with you or your doggies, butts yeah, i would keep Syd on a tether too
Kisses,
Ruby ♥

We are so very sorry to hear that there was an altercation / accident and you were injured. I guess in some ways, it really does come with the territory. Years ago, I was bitten as well...by a very small poodle. Here's hoping you are feeling much better and everybody is behaving themselves!
xo Chloe, LadyBug and Jeanne

Oh Sue, so sorry to hear this. We are sure you were not the intended target, but we sure hope you can get that infection under control and heal well. And please don't ever worry about comments for us.

Wonderful news on Sebastian - hope that is the end of that wound.

With dogs.. you'll never know. Even the sweetest dogs. Living with dogs have some hazards but the love they give back is 10 folds over.

Good to hear that you are healing properly. Among friends... no one will mind if you can't comment. I know i won't mind. I sometimes read everyone's blog but i don't comment too :)

Good to see that Seb is healing nicely. Take care ya!

So much going on. It's strange what sets them off, isn't it? Beau & Abby were quite snarky with one another this morning.

I'm so sorry you got caught in the cross fire. I do hope you are taking care of yourself and taking the time necessary to heal.

Finally - glad to hear that Sebastian is finally healing up so nicely. g

Oh, Sue, when you said you had hurt your ankle I just assumed a sprain. That is terrible, but I know it's a risk we all take by living in a 'pack'. Dogs just don't think the same as we do and it's hard to be ahead of the game all the time waiting for 'reactors'. I hope it heals soon, that has to be a 'real pain' trying to function. Sounds like you are making a good come out of it by reinforcing the need to 'share' with Noah and Syd. Little buggers.

I try to be mindful here too, but sometimes things happen. Minty is very bossy but she gets rolled pretty fast when she tries that with me in the area. The collie pups use their teeth allot--mostly snap air and mouth, but sometimes I get bruised when I 'hit a tooth' but so far no bites accidental or otherwise.

Hang in there! And you have no reason to be embarrassed.

Oh Sue... I wasn't blogging when Mugsy bit me - I was breaking up a dog fight and he was still trying to bite Fred - but I know the pain and shame you're feeling. I wish I could come with lunch or something!

Sebastian's wound looks fabulous. I hope that the soft, pink skin means there's real healing within, and that foreign object is gone for good.

Ouchie! I'm so sorry you hurt your ankle, and I know Syd is very sorry too. Things happen sometimes, even with experienced dog owners. Don't beat yourself up too much.

Sebastian looks so much better!

Catching up on your blog and am sorry to read about your injury. It does happen, unfortunately, but it's great that you've taken it in stride and know that it's all part of dog-ownership. Some people don't as we both know. I hope you're continuing to heal uneventfully and your boy Sebastian is too!! Take care!!