Today Sebastian went in for surgery. He had a sebaceous cyst on his hip that was infected. He's been taking antibiotics for a week and today was the day to get rid of the nasty old cyst. 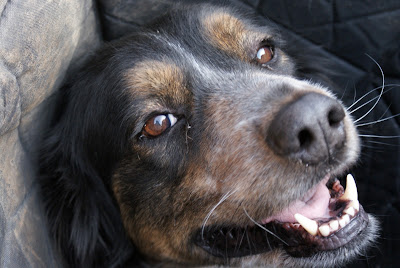 When we discussed surgery, Dr B told me the incision should be about two inches long and we were expecting a fairly simple procedure, BUT nothing lately has gone quite as planned, and this was no exception.

When we spoke on the phone with his nurse this afternoon she said the cyst was deeper than they expected. But when we picked him up, Dr B came out and said that he was surprised at what he found. Not only was the cyst much deeper than expected, but the whole area was full of scar tissue. Apparently, Sebastian at some time had a pretty bad injury. 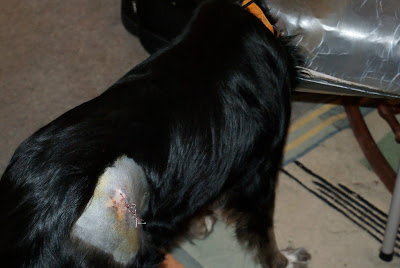 When Sebastian found us we estimated his age at 18 months. Dr B says it looks like he was attacked by another dog when he was younger. Scar tissue is extensive in the hip area and down into his leg. The surgery removed the cyst and his hair should grow back in part of the shaved area. The white area is scar and probably won't grow hair, though his guard hair covers the spot. 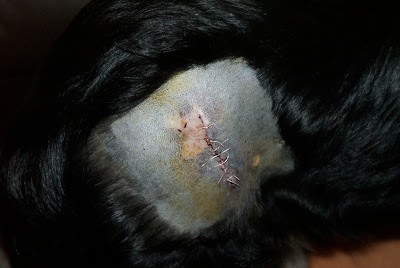 Only Sebastian knows what happened and why he was homeless. We don't know quite what the future holds for him. I'm hoping that he won't have problems with the hip and leg in the future, but we'll deal with that if and when the time comes. For now, he's home and sleeping comfortably with his head resting on his big duck. 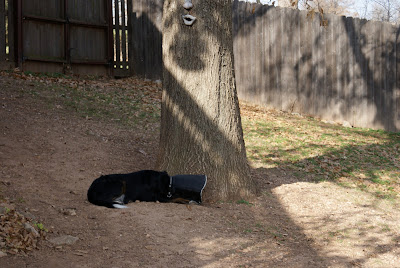 Oh the poor guy. Give him hugs from us!

We're sending you tons of healing vibes, Sebastian! You have the best family in the whole wide world taking care of you and loving you!

My goodness, Sue! Just what you need is another mystery! Sending best wishes for Sebastian to heal quickly!

Sending lots of labralove for a quick recovery. Poor guy. Sounds like some rough times for him before landing at your estate.

You've had more than your share of bad things the last few months. We're sending prayers for a complete recovery for Sebastian.

You give Sebastian lots of huggies and kisses from us. But now thinks are looking up for him, he has found his furever home! RIGHT!

Oh my goodness, Sue! You sure have had your fill of mysteries lately. I am so sorry to hear about Sebastian, but hope that he is well on his way to a quick recovery. No one knows what you went through, but you sure are in the best place you can be now!! xoxo Chloe and LadyBug

Poor Sebastian! What a mystery. He had a very rough beginning to life. At least he's safe now.

Then this is all the more reason that Sebastian found his way to your door - he knew he would get the love and care he needed. Phantom has a scar in the same area, somehow poked himself on a nail. The area healed but the fur never really grew back there.

Here are some best wishes for healing from the gang of three at this house. He has been good about not fighting at your house, hasn't he? Some dog probably took him on and tore him up quite a bit.

I wish I knew the background stories of the various rescues we have had over the years.

Aaaah, poor baby. All our paws are crossed for Sebastian's recovery
Benny & Lily

Goodness Sebastion. Glad you found a pawsome home - sounds like it was a ruff start before. Sendin lots of healin vibes your way pal :)

Aww, poor Sebastian! He sure was lucky to find you.

Poor Sebastian!!! :(
I'm afraid Lola may have a Lumpectomy in her not-so-distant future. The mysterious "not like the others" lump is growing... we going to see the doc next week.

Oh dear. If only Sebastian could talk, I'm sure he would have one hell of a story to tell. I'll be keeping my paws crossed for a fast speedy recovery! And also some AireZens....
I wish for you and your pack a very healthy and mellow Christmas season. You deserve it so.

Oh goodness... Poor Sebastian! He's lucky he found you, and that you have Dr. B. He's in good hands, no matter what.

Oh the poor baby. I'm surprised if he truly was attacked by another dog that he's fit into your pack so well. Speaking of which - how goes the Alpha war? g

Oh my gosh. Poor sweet boy. May he recover completely. How lucky he is to have found you.

I'm just glad that Sebastian has his duck to keep him company. I'm sure Dr. B has done an excellent job with him. Mostly, I'm glad Sebastian wandered into your life, and has you to love him.

I'm so sorry to hear about Sebastian's condition. I am sure, given time, he'll be back on all fours again. But I know that you must have been really worried. Poor pup!
Thinking of you and sending lots of love.
Your friends in SA

About seven years ago I found a near starved to death, mangy, wounded French Mastiff. After much love and care and food (and money money money :-) my dear Boone was the sweetest most devoted dog I've ever met. He had one place on his shoulder that was scarred and would not completely heal after months of care and rounds of antibiotics. Finally the vet did exploratory surgery--I expected him to find bullet fragments or something like that, but all he did was scrape out scar tissue and clean it all up well and stitch him back up. He healed quickly and completely after that, so hopefully Sebastian will too. Boone was only with me for six short years, but I will always treasure our time together.
Tammy

Oh my goodness. I wonder if myofacial release or osteopathy can help get rid of the scar tissue. it does in humans for sure. but the downside is that it's pretty painful to do. Ostepathy is not painful but myfacial release is. I've had my fair share of scar tissue, deep stuff like this and it worked wonders. but it's important to be consistant in going to someone who does it. you can also learn to do it on your own i think, as juno's osteopath showed me how to release tension in her areas--tho she doesn't have scar tissue. still i think it could be worth thinking outside the box in terms of treating it. i hate to see pups have to live like that. He's a cutie. What amazing family you have to care for pups who find you and need you. :) best wishes and lots of warm love to him.

Don't forgot to stop by our blog and enter the Angry Birds dog toys giveaway!

You really can't catch a break. I hope that Sebastion recovers without a hitch. Lots of Labralove from us too.