Sydney and Mackenzie are 1/2 Brittany and 1/4 Springer Spaniel so they should be good bird dogs. Syd likes to sit in the yard and watch birds in the bushes, but Mac seems to be more Beagle and usually has her nose to the ground. 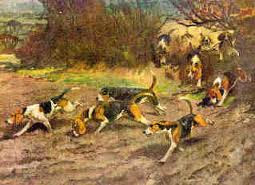 Yesterday Sydney got her first bird. OK, it was already dead from flying into a window and breaking it's neck, but Syd found it on the ground, grabbed it and wasn't about to give it up. Rob had to lure her to him with treats and toys. She was going to keep her prize and take it apart to see how it was made. She also had no intention of sharing her prize with her sister. 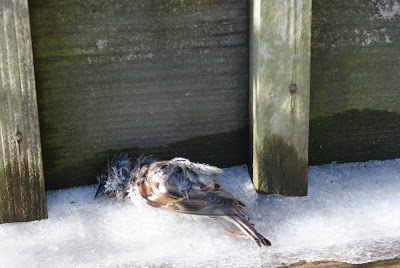 When Rob had relieved her of the bird and brought her inside, she was all excited and jumped all around the place. We began to think she might actually be a bird dog afterall. Since we don't hunt and we discourage killing of the birds we lure to our feeders, she will not be getting much opportunity to practice her skills. Still it's nice to know that her genes are working.

This morning when we took them outside, most of the ice had been replaced with mud. They didn't seem to mind as they chased each other  around the yard. But when it was time to come back inside, we noticed that Mac was pretty muddy. 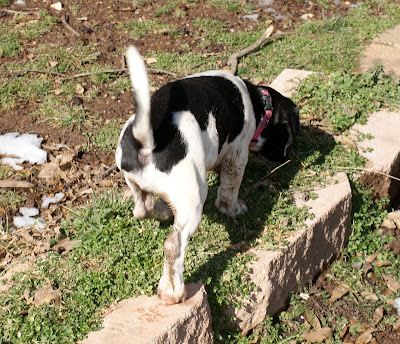 The problem with being a mostly white dog is that the mud shows much more than it does on the black long haired dogs. Syd  is showing off her new brown spots. 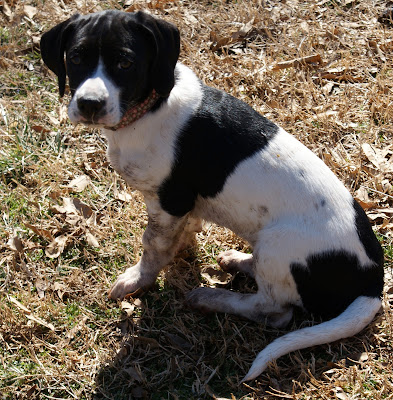 They both visited the garage doggy bathtub before rejoining us upstairs. 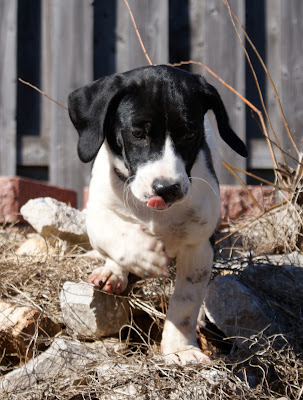 Fudge will get another chance for snow tomorrow night. He's still hoping.
Posted by Sue at 5:52 PM

Sometimes Roxy is a brown dog with white spots instead of a white dog with black spots. Then she has to be hosed off.

Bet they will be good bird catchers. You guys are so adorable
Benny & Lily

Good snag, Syd, and you're still so young!
We hope you get your snow, Fudge!

Cutiepies... But yes, white dogs show mud. Both of mine are getting bathes later today, maybe. Depends on how quickly the temperatures drop.

Dogs will be dogs! I've never known a dog who could resist the temptation of a dead thing. ;-) It's been muddy here too. Luckily, a quick hosing off of Wrigs's paws and lower legs usually suffices since he rarely does a puppy-style mad dash.

Oh, nice find Syd!! Ma always makes me 'drop' my treasures...that's why I have learned to run into my tunnel where she can't see....
Looks like your Moms is gonna soon put the 'drop' into your training sessions....pfft!
Kisses,
Ruby

Mud Puppies! Sadly, that's a common springtime phenomonon. Well done, Syd, catching that bird. The fact that you had assistance has nothing to do with it, right? Fudge, I hope you get your wish, and are able to take your puppies out to play!

uh-oh... sounds like you have a little problem brewing for spring! :)

You can imagine what we go through with all white!! The puppies are adorable!! Sure hope you get some snow Fudge!!
xoxo Chloe and LadyBug

Gosh how I love these two little ones. They are sooooo mooshy and kissable!