Samba's puppies were not the first litter of puppies that I've been responsible for. When I was a teenager I was given a young German Shepherd mix that I named Hermione. She was from a shelter and I don't know anything about her background. 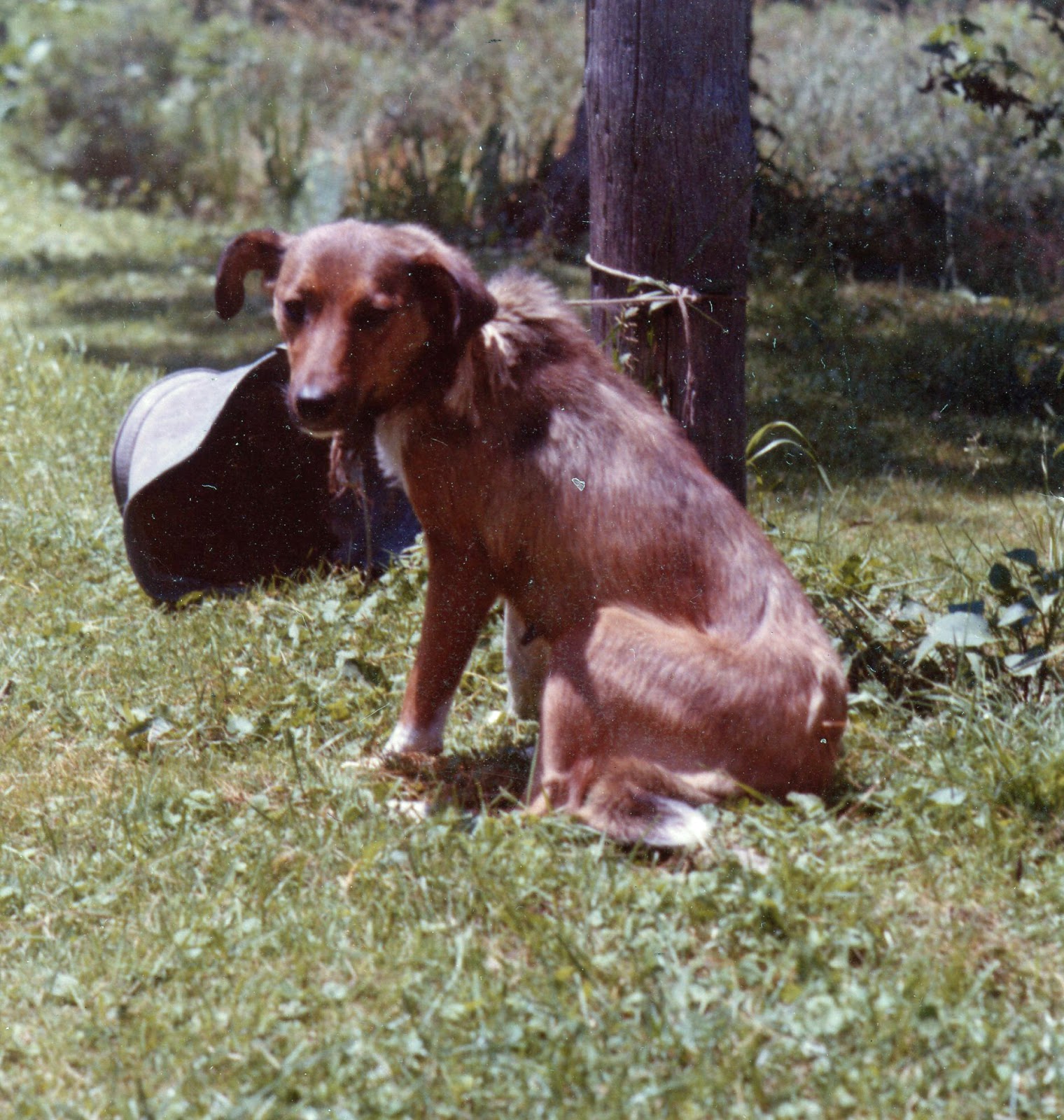 When she was a bit over a year old I was saving my babysitting money to have her spayed, but she came into heat before I had enough.  One Saturday morning I had to go on a school trip. I was worried about leaving Hermione because I was afraid my four year old brother might let her outside alone, so I locked her in the garage.  When I got home several hours later I went to get her and discovered that the window to the garage was broken.  I asked my little brother if he'd seen any dogs around the garage and he said yes, the blue dog was there. I didn't know what he meant till the next day when he pointed to a black Cocker Spaniel in the yard and said, "there's the blue dog". Two months later we had a litter of four blue and white puppies. 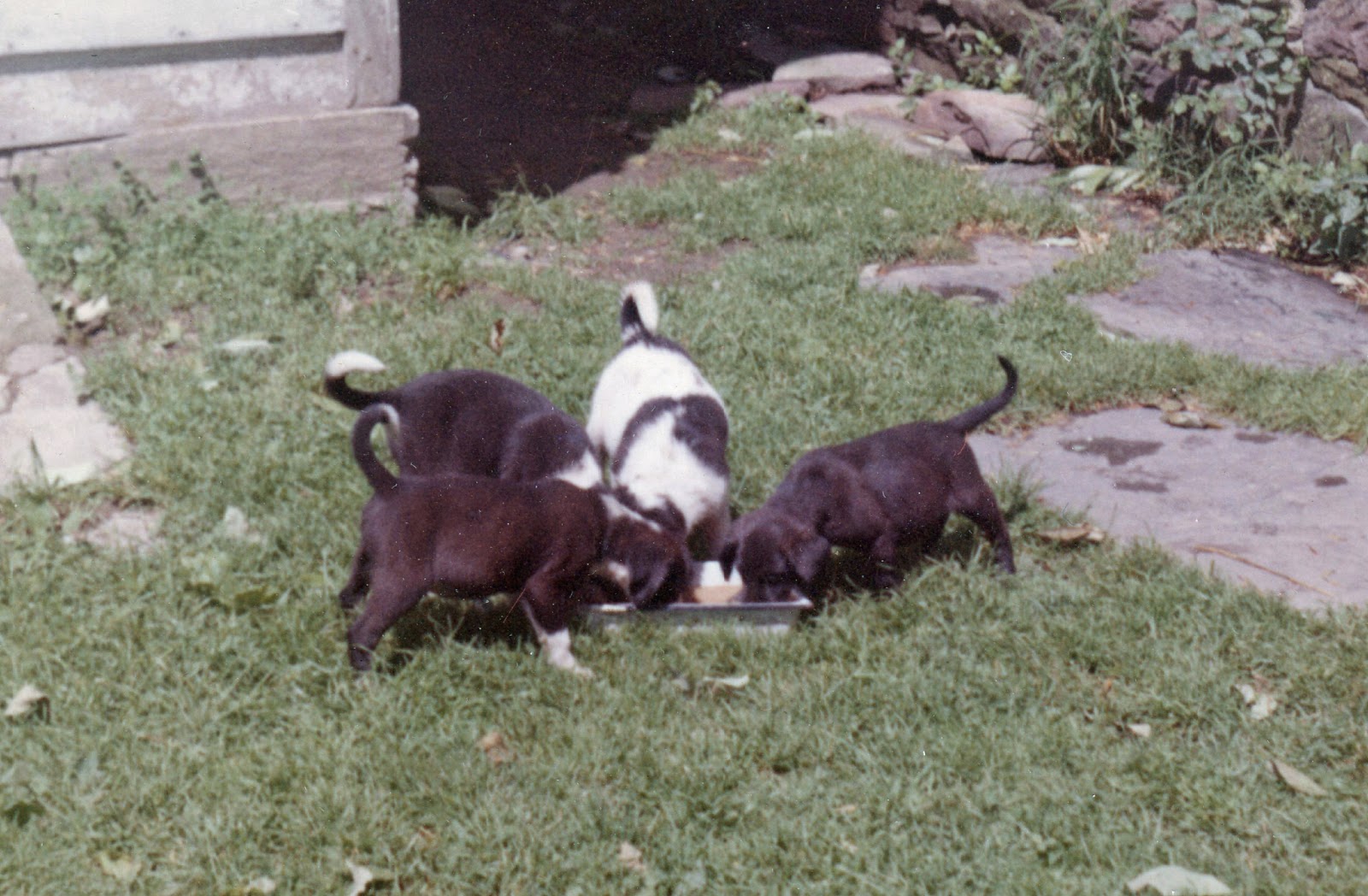 There were two boys and two girls. This boy was named Louie and went to live with a family across town. 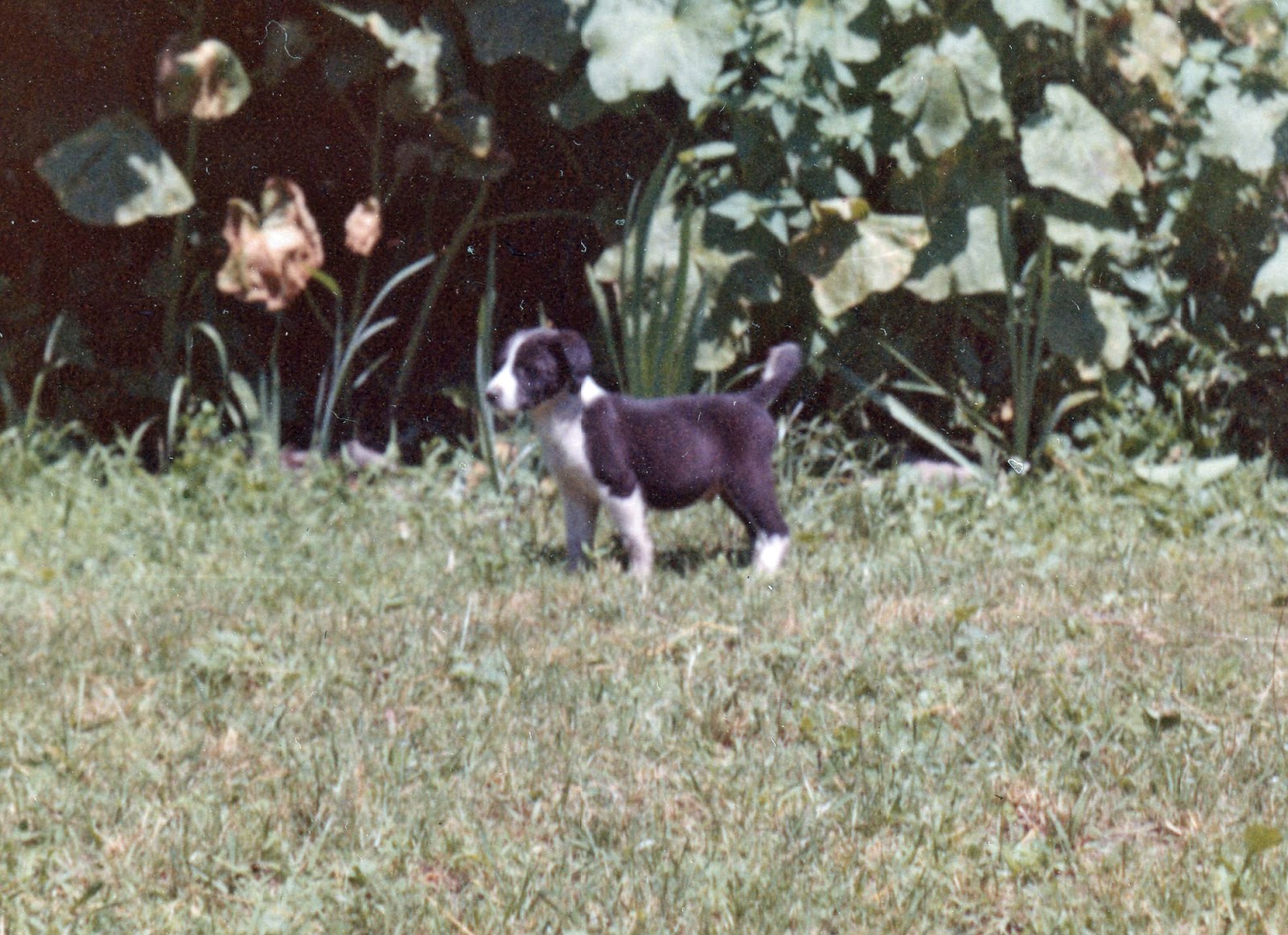 This boy, Claude, was the only child for a wonderful young couple who loved and pampered him. They kept in touch for the fifteen years of his life. 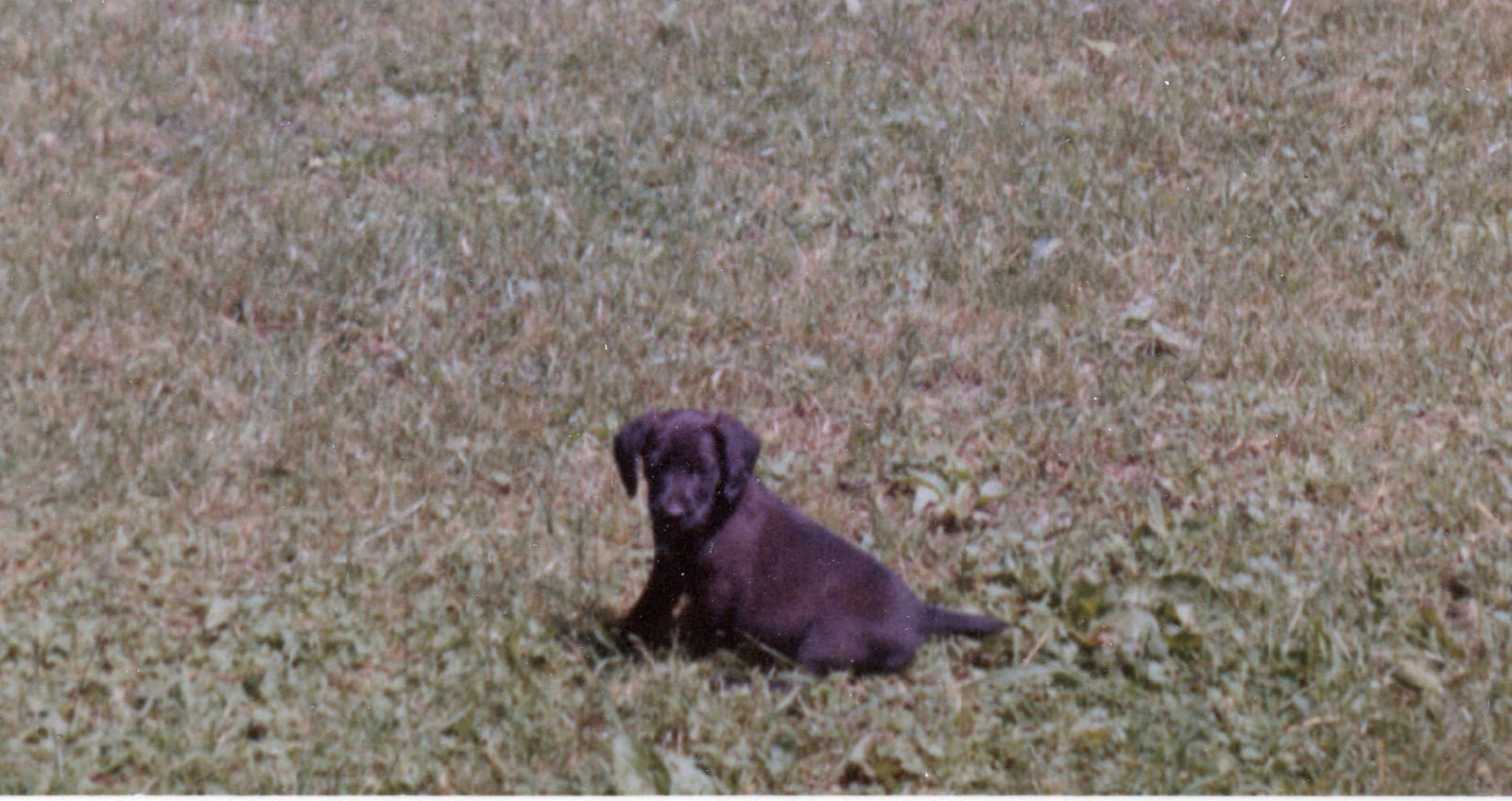 This was Penny. Doesn't she look like my Sydney? I kept her, but she only lived for four months. She had a brain tumor that was causing lots of problems and I had her put down before she got worse. 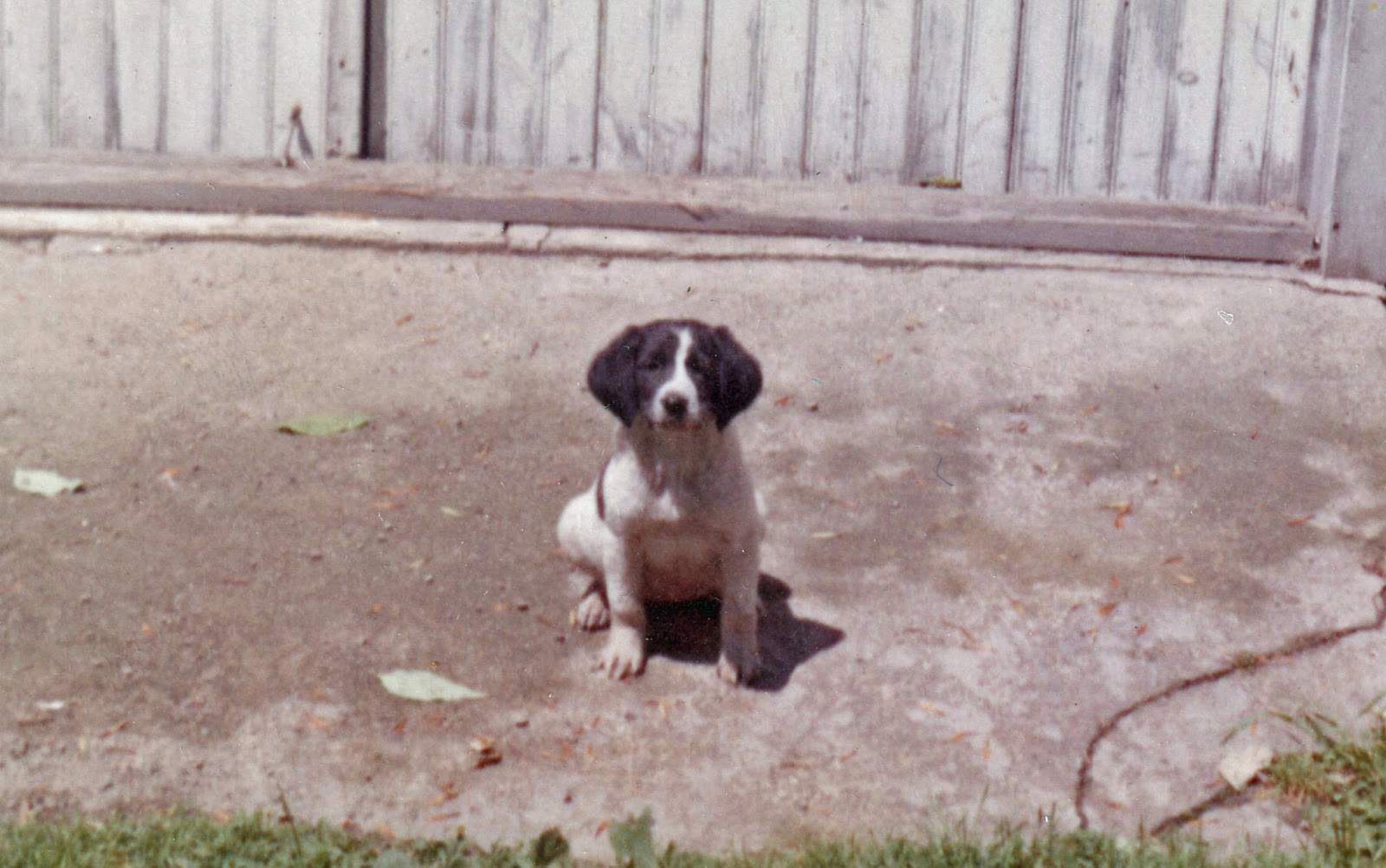 This is Zelda. She was adopted, but returned after just two weeks. I kept her and she was my constant companion for seventeen years till she died quietly in her sleep. She was a very smart, easy dog and we had many adventures together. 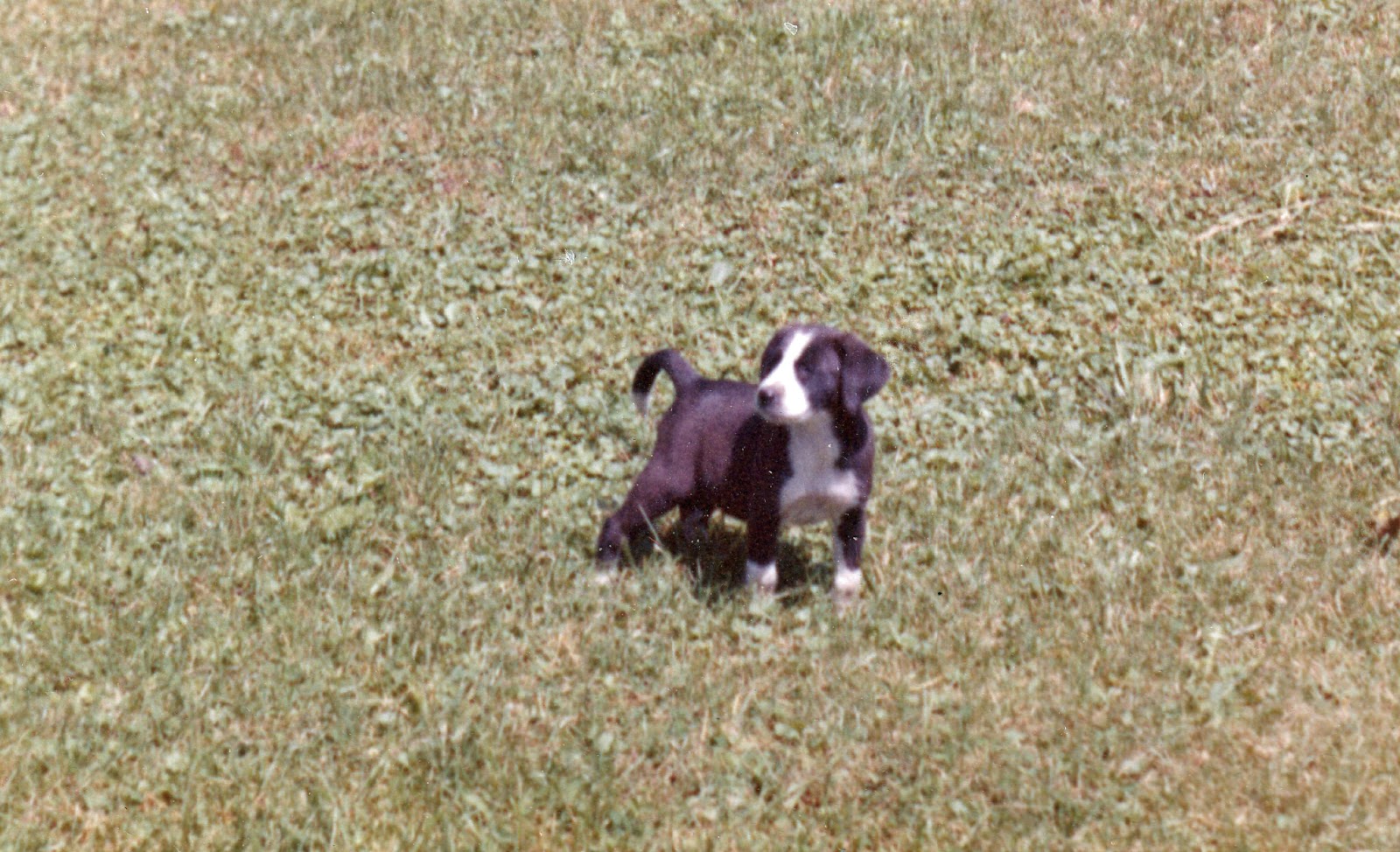 These photos were taken when the pups were eight weeks old. A week later Hermione was stolen. A group of dog thieves came thru our small town and took dogs from porches, pens and back yards. Hermione was snatched, but her puppies were in the house and were safe.
Posted by Sue at 11:41 AM

What a great story, Sue! It sounds like Hermione and her pups set the stage for your life to come. Sorry about Hermione being taken and Penny's early demise. It must have been difficult! How fortunate for you that Zelda was returned. Oh, the twists and turns of life...

And even then you were being a responsible pet owner, despite being young and despite spaying and neutering not being as common then. (or at least it wasn't in my neck of the woods). Also impressed that you kept in touch with puppy owners and took back Zelda. Lovely story except for Hermione being stolen...

The new puppies so resemble those babies! 17 years. Wow...

Rather a bittersweet story, with the loss of Hermione and Penny. But it proves to me that character is inborn, and these were the first of many dogs to benefit from your loving character.

Oh Sue, you do know that you are living a Shakespearean life right?!
Such happiness and sorrow all wrapped up in one amazing story.
You should start a blog....hehehehe
Kisses,
Ruby

Wow .....that is an awful lot of good and bad in the post....You poor young thing. saving your money to have your dog SPayed! Lucky world we live in

Wow. So bittersweet. I've heard of dog thieves, even now. I don't want to think about it...what happens to those dogs.

Had a similar experience with an English Setter and a collie/shepherd mix. Only there were 9 puppies.

Why do people steal dogs?!!!

Happy and sad . . .you must have been a serious kid to think so carefully and deeply about your responsibilities.

Oh Sue - I don't know what to say. I can't believe someone snatched Hermione! How horrible. And poor Penny. I'm glad you kept one of the puppies and kept in touch with the owners of the others.

What a hugely responsible child you were. g

Marjie took the words right out of my mouth. How appalling that some scum who is undoubtedly now rotting in the 7th circle of Hell would steal Hermione. How sad that Penny died so young, but it's clear she was loved and cared for her entire, short life. And how wonderful you had so many years with Zelda and found good homes for the boys.

I've always locked my gates, but also felt that having 3 - 6 adult Danes at a time was a wonderful theft deterrent. Now there's just Jed & Abby, but they're never outside in the yard unless I'm home.

We just loved this post until we got the part where Hermione was stolen. How heartbreaking!

Oh Sue!! I'm so sorry. My father had a cocker spaniel girl stolen and it broke his heart. You are definitely the ultimate dog-ma! Thank you for loving dogs as deeply as you do and sharing your experiences with us.

Poor Hermione. But what a lovely story overall.