A Dog's Work Is Never Done

Rob is digging our fish pond by hand. The ground is very rocky here and it's slow, difficult digging. He sometimes gets up early and goes out to dig before it gets too hot and lately he's been digging just before dark when it's a little cooler. All the dogs go with him and help, but Morgan is the most faithful. The others go off to play ball or chase each other, but Morgan keeps on task. 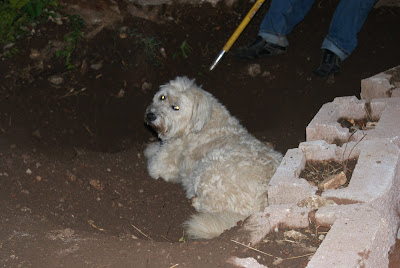 Tonight I put the others in and went to check on the digging. Here's what I found. Rob sat down to take a break and Morgan moved over next to him. 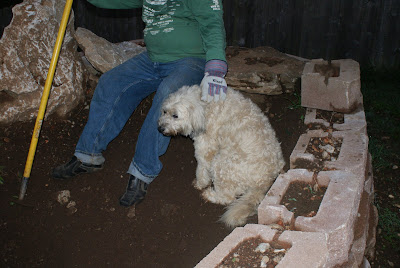 She stays by him until he's finished for the night, then follows him inside. 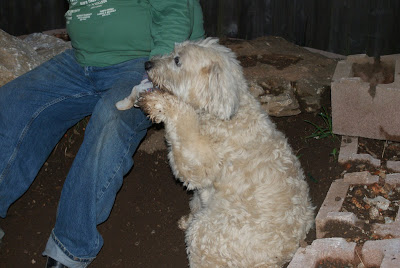 He says that she occasionally digs along with him, but most of the time she either lies in the dirt or sits on a rock to watch. 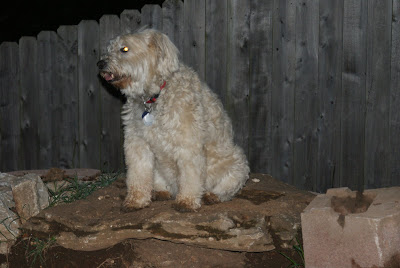 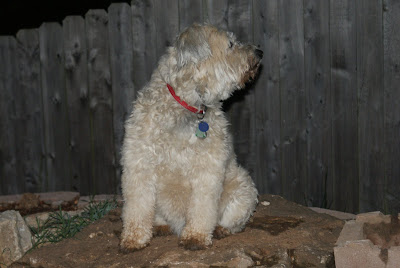 She's always on the alert for anyone approaching. 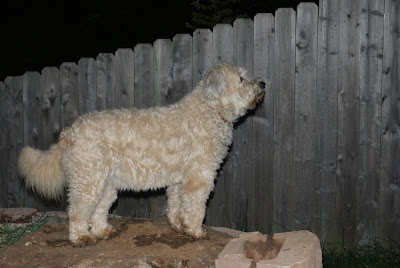 The neighbors had just driven into their driveway and she had to greet them. 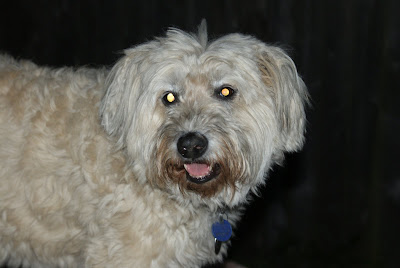 She loves being with Rob and helping him with whatever job he's doing. 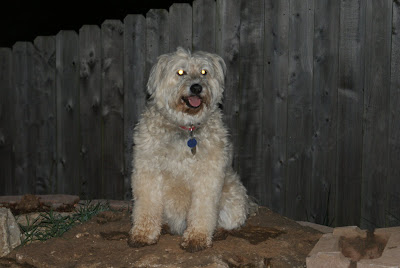 When they finished in the pond, we did some work on the library. There will be sliding doors under the window seat so tonight we installed the hardware. And Morgan was there watching.
In the morning she'll be rewarded with a trip to the lake.
Posted by Sue at 10:52 PM

What a sweet girl! Those are moments I'm sure your husband will always remember.

Awwww, you can help but admire Morgan loyalty!

The Dogs like to sit close when I do work in the yard too ... but somehow they almost always get in the way or sit on the very flower bed am trying to plant! :P

I love how her red collar looks against her white fur. She's such a good dog. I wonder if she'll swim again today. g

How precious is Morgan, what a faithful companion she is. It must be fun to have her around.
x

There's nothing like canine devotion. My girls are still more nosy than devoted, but I think they'll grow into it.

Well, I guess we know which human belongs to Morgan, don't we?

Thor loves us all, but the top human in his world is the Great Red Protector, also known as my dearly beloved. Dogs are so interesting!

what a lovely 'shadow' to have. snuffs is the same, she follows me everywhere..my shadow.

So I'm guessing that Morgan is a daddy's girl? She really is a sweetheart and deserves a good time at the lake. I like to help my grandpa and my dad when they work in our garden. They use funny tools, but I find my paws and claws to be much more efficient at digging.

Me and my dog comes to mind. Morgan could do with some wellies to. best wishes Julie.C

that's cool that she gets to go to the lake. she will probably appreciate that a lot. what a nice girl.

Wow, what a good little helper!