Light At The End Of The Tunnel

Look what we have to play with today. I bought several pieces of agility equipment for the dogs even though I don't really have any intention of doing agility at a competition level. I just wanted them to have them to play with. Rob got out the tunnel for them and they showed a lot of interest in this strange contraption. 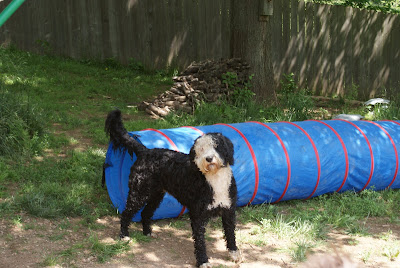 Norma Jean seemed to be showing it to me. 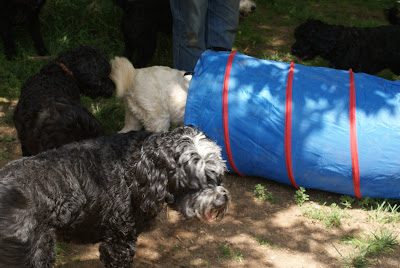 We just stood there giving them encouragement. We wanted to see what their reaction would be.
Morgan decided to go thru it. 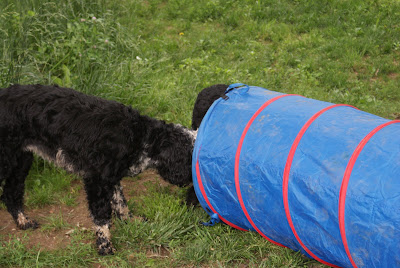 Tess watches one of her sisters go thru. Tess didn't want to go inside it even though she was very curious about it. Maybe next time she'll try it. 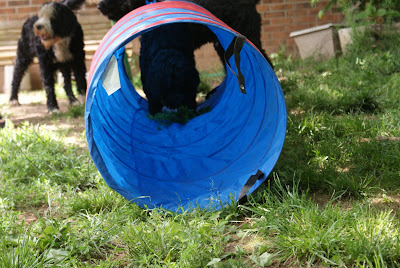 I think this is Samba. 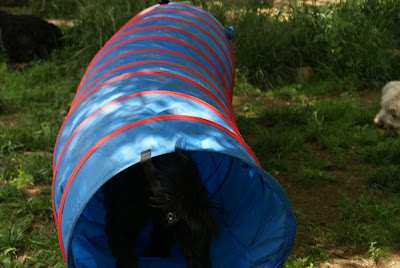 Samba coming out the other end. 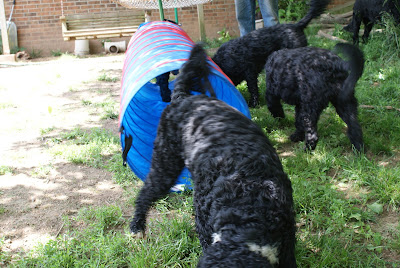 Norma Jean ran thru several times, then started backing up thru the tunnel. She did the same thing about a year ago when we showed it to her. I guess she wants to see where she's been. She goes all the way thru backwards. 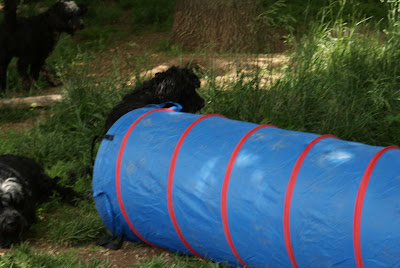 Bailey ran thu. Her sister Lola, however, thought it was great fun to run at the side of the tunnel and head butt it causing it to roll down the hill. One time it rolled down with Bailey inside. They both seemed to think that was great fun. We need to stake it down next time. 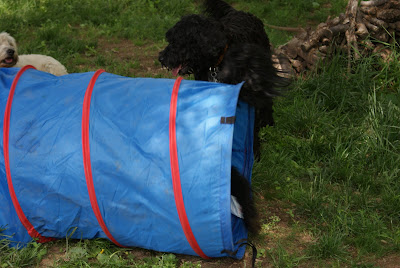 I think this is Noah going in. 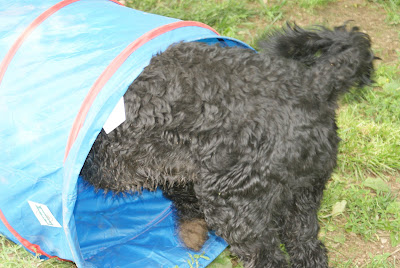 Of course Fudge had to get on the action. 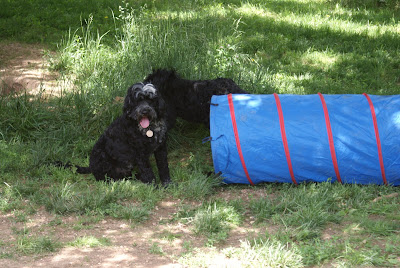 Sky says, Watch me, Ill show you how it's done. 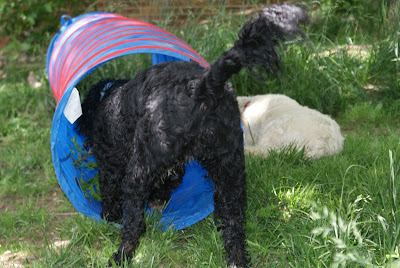 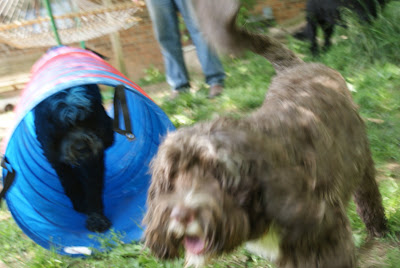 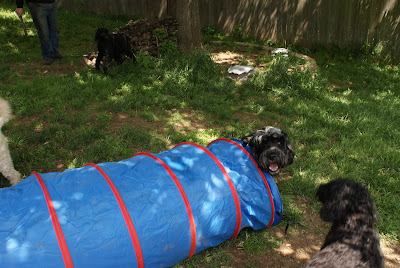 this is so similar to my days teaching in my nursery class....we put out something new in the play area and everyone has to have a go- some tentatively, others with glee and gusto. loving your summery days with da gang...

Looks like everyone is going to have a lot of fun with the new equipment. What fun! I agree that summer is just the best. We finally have it here. Milo lays on our deck every day for a few minutes until he gets too hot. Back and forth all day. Hope you are all having a terrific holiday weekend.

AH AH! Can we play with you? It seems like lots of fun!!!
Kisses
Rufus and Indie

That tunnel looks like lots of fun! Can we come over and play too?!

LOL! Looks like they're having a blast. Bet they're going to have a lot of fun this summer with it. Can't wait to see them with the rest of the equipment.

LOL! Your kids are so very adorable! I love all of the action shots. It's funny how we get a feel for their different personalities. Hugs to all!

We're HOPEFULLY making (and buying) a set this year to practice with. We won't be able to afford competing for at least another few years (Damn student budget), but I figure having a set at home'll save me TONS, since the nearest classes to us, is 1/2 hour away!

I figure if I have my own stuff, it'll give Galaxy her agility fun, and end up being better on the pocket book... plus we can invite dog friends over to play too!

Ohhh! I want one of those! Sky sure is a good teacher.

I need to find a taller tunnel. Tunnel was absolutely Beau's favorite but all I could find was a kids tunnel and he's way too tall for it.

Poor Morgan? being rolled down the hill inside. Sounds like they had fun. g

I love playing with agility equipment...it is a lot of fun. We don't ever plan to do it for real either. :)

Hehehehe! THey all look like they're having loads of fun with the 'Tunnel'. Very amused by Norma Jean going butt-wards down Tunnel. Love the pictures of all the dogs checking out tunnel. :)

TUffy and the Dog WOods Pack

Whew. Glad I'm reading this at work, or Sissy would have me tunnel-shopping already. I'll have to measure her and get the shortest one I can, so it isn't SO huge for Gretchen...

Do they get to play with neighborhood children? The tunnel seems like just the thing a little kid would love to chase an energetic doggy through!

That is a great idea. Even if you aren't going to enter them in competition, just changing up their toys has to be exciting for them! I might steal your idea.

What fun, I like the part where it rolled downhill with Bailey inside, what a ride!
x

That tunnel look so fun!
I did a bit of agility when I was a little pup, but I did not get the tunnel. I don´t wanted to go inside tunnel. I stopped the agility because the school was far from home.