It's been a long time since Mom has let me post, but I have a lot to say. Besides, she's feeling sorry for me. You see a couple months ago I began limping a little. It wasn't even very noticeable but Mom has an eagle's eye when it come to us dogs. She gave me a little tasty Rimadyl tablet for a few days and everything was fine again. I was back to running and jumping and moving rocks to look for lizards. 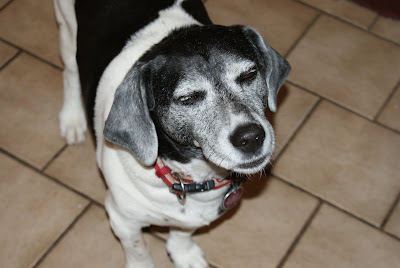 Then a couple weeks ago the limp came back. We did the same treatment but it didn't go away. Then last week it got a little worse and over the weekend it got really bad. So Mom said those terrible little words that no dog wants to hear, " You're going to the vet".

Monday morning Mom got up and reached for her coffee. Nobody talks to Mom before her first cup of coffee because she's really grouchy. After the first cup she turns back into Mom again and things start getting done. She called the vet's office and they said to bring me in that afternoon. Oh no!!!!

When we got in the car I thought we were going to the library. When we go there to pick up a book for Mom the nice lady at the window gives me a cookie. One of the ladies even gives me special meaty basted cookies that are delicious. But this time we didn't turn into the library and I realized where we were headed. Oh no!!!!

When we got to the vet's office I didn't want to go in but Mom dragged me inside.  Next they weighed me and said I'd gained two pounds when I was supposed to lose five. Then they took my temperature. How humiliating! 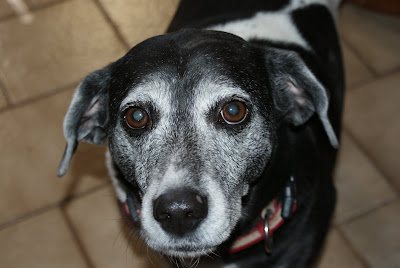 Then in walked Dr B. Oh no!!!! He and Mom talked a little, then he put me on the table and called in some helpers. Mom said her Porties never had to be held when they were on the table but it took six people to hold me still. Dr B did all the usual stuff, looking in my eyes and ears and feeling me up, then he grabbed my sore leg. He isn't as gentle as Mom. He pushed it and pulled it and twisted it and moved it every way he could. Oh no!!!!

Finally he let go of my leg but he and the helpers still kept me on the table.  He said to Mom, "Do you want the good news or the bad news?" She asked for the bad news, silly woman. He told her it would take a long time to heal. The good news was that it probably would heal. He says it seems to be tendonitis in my shoulder. It could be from an injury or an infection, but my jumping has aggravated it. I have to take an antibiotic and a steroid and try not to jump. Who's he kidding? Me not jump?

Then he showed Mom how to give me a shot in my hip. I have to have the shots every week for a month. Mom is going to have to tie me up like a calf in a rodeo to give me those shots but she doesn't seemed concerned about it. I wonder what she has in mind. 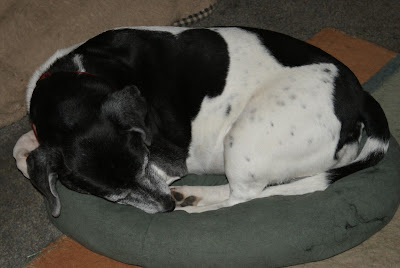 So now Mom's knee is getting better and she isn't limping anymore, but I am. She said she had to have a shot and take medicine too, but I don't believe it. She's just trying to fool me. Dad put pillows down all around the bed so if I do jump off I land on a soft place, not the hard floor. He also said I can't chase squirrels anymore till I'm all better. Oh no!!!

At least Mom says I can post on the blog, but I'd rather be chasing a squirrel or moving rocks to find a lizard. It's not easy being a dog.