The Beauty Of Nature?

We have lots of wild visitors at our house. You've met Roxy (formerly known as Rocket J) and her three babies. You've met the possum family. You've seen some of the deer that wander thru. Did you know we also have a pair of armadillos that cross the yard to get to the farm field. I call them the living roombas because they seem to hover as they glide across the yard. 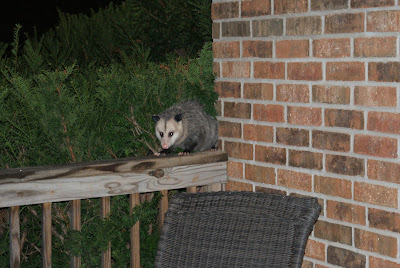 You know that we have tons of squirrels and lots of bunnies and a big flock of wild turkeys. 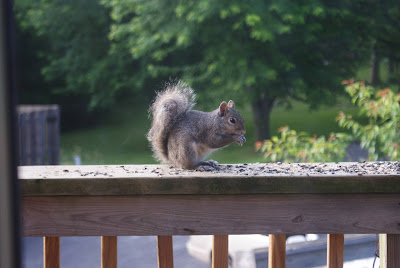 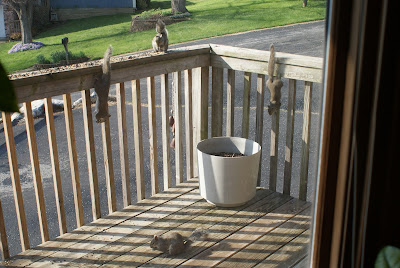 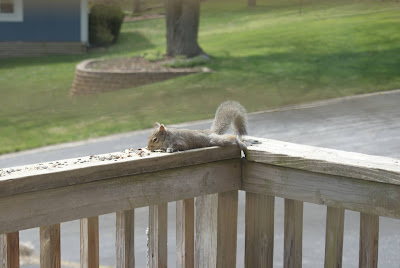 We also have lots and lots of birds, from the tiny hummingbirds that chase each other around the porch to a huge Barred Owl that likes to scare us when we're out after dark. He sits in the tree above my head and lets out a loud screech. We all run for the door. Last year the pair of owls nested in a tree across the street and the little ones made such a racket that we couldn't wait for them to grow up and leave.

We have lots of robins, finches, chickadees, sparrows, blue jays, woodpeckers and others. But mostly we have Cardinals. When we first moved here we were both amazed at how many Cardinals hung around the yard. In Maryland we had a pair but here we counted at least eight pair at one time. 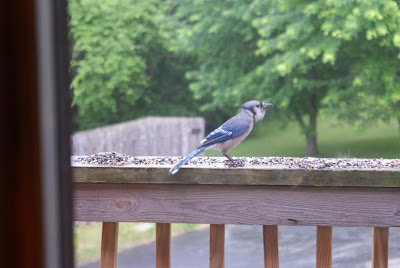 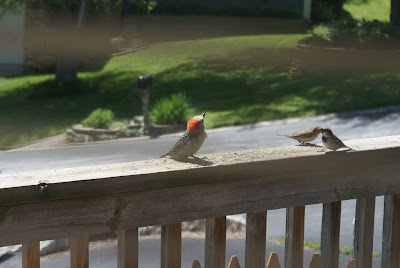 But now we have something we'd never seen before. We have a pair of bald Cardinals. They look like half cardinal and half vulture. They are quite ugly and we even started calling the male"Uggo". 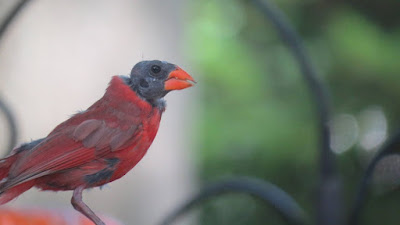 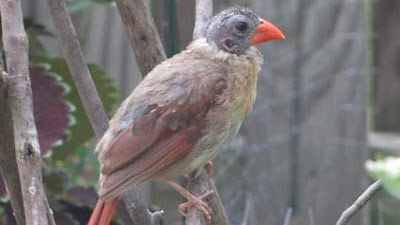 I looked them up on the google and the condition can be caused by either mites or an unnatural molt. In either case the feathers are supposed to grow back in a couple weeks Wrong! Uggo and his ugly female friend have been like this for at least a month and show no signs of growing feathers on their bald heads. They don't appear to be sick. They hang around the feeder most of the day and seem to act as normal as the other birds.

Let's just hope these two don't decide to have a family of bald birds. I don't think the world is ready for flocks of blue  naked headed cardinals.

It began in June of last year. A big hungry mama raccoon raided our bird feeders one night. The next night she returned with her six babies and they finished off the seeds the birds had left behind. Not much of a meal but easy for the family to access. We began bringing the hanging feeders in at night because the hungry creatures were stealing them and leaving the empties under the porch. Still, there were a few seeds remaining in the flat feeder attached to the deck and they disappeared overnight. 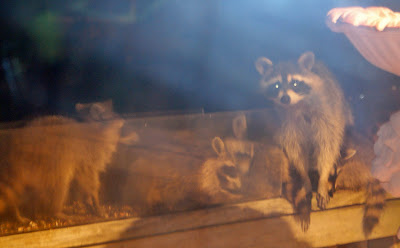 Then the family moved on but they left behind the runt of the litter. He was tiny and they probably felt he couldn't keep up, so they dumped him. He curled up and slept in the feeder for several nights. When I took the dogs out he'd lift his head and look at us, then go back to sleep. He ate the few seeds leftover from the day. After the first few nights he started sleeping in the hedge during the day, then would turn up when it got dark. I felt bad for him and put out some grapes and hard boiled egg. Then Rob admitted that he'd been cutting up hot dogs and leaving them in the feeder for the little guy. 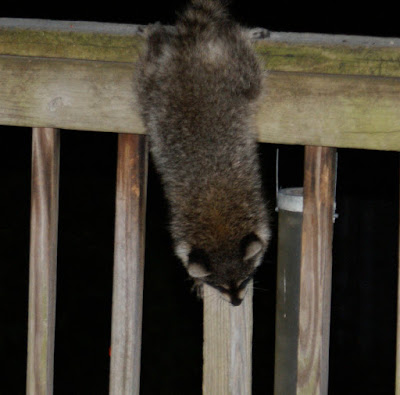 I started calling him Rocket J and we started putting out dog kibble every evening along with any leftovers we had available. He turned up every night around 10 PM and watched us watching him eat. If a car came down the street or something moved he scrambled into the hedge to wait till it was safe again. If we went outside he climbed onto the roof and watched us. Rocket came every single night for his dinner. It could be 90 degrees or zero. It could be raining or sleeting. He showed up.

This spring he started getting more comfortable. He started showing up about 7PM while it was still light outside. He began sitting down to eat and sometimes would even lie down with his legs hanging over the rail to take a quick catnap. After finishing his dinner, he'd climb into the fountain for a drink, then would play in the water for awhile. We would stand at the window and watch his antics. Then when he was finished Rob would take out a second helping of kibble. Rob would no sooner be back in the house before Rocket would reappear and finish off his second course. 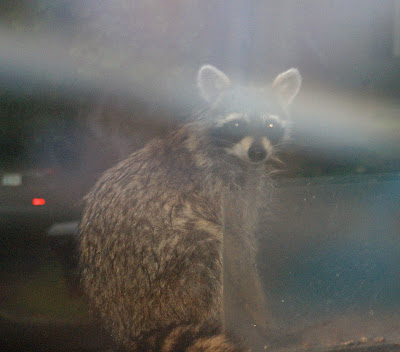 We got creative at times. A couple times I made peanut butter sandwiches and cut them into little pieces. He loved them. He liked all fruit but wasn't fond of green veggies. They were the only thing he ever left behind. His absolute favorite was when we'd coat his kibble in bacon grease. Those nights he'd eat everything, then lick the feeder clean. He didn't want to waste a bit of that bacon flavor.

Then two weeks ago Rocket showed up early, around 6:30,and he had a surprise for us. It seems that Rocket J was not a boy. Rocket is a girl and she brought her three babies with her that night. They were adorable! They looked like fluffy gray kittens with white ears, black masks and striped tails. One baby was a bit bigger than the others and started eating kibble along with Mom. The other two smaller ones stood in the box watching us. At some point the three climbed onto the roof to wait for Rocket to finish eating. Then they all disappeared into the hedge. 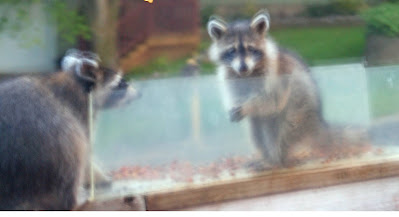 We didn't see the babies again for about a week. They had really grown in that time. They come along with Rocket almost every night now and they're about as big as she is. Rocket is still a pretty small raccoon. We expect that they'll soon be going off on their own but I think Rocket will probably be sticking around. She's addicted to bacon grease.