Send In The Clowns

Each evening as the sun starts to go down we take the hanging bird feeders down and put out dinner for our night crew. We have a fixed open feeder on the deck railing, a terra cotta platter and a blue Chewy bowl. We put kibble in each along with any leftovers or undesired foods from the day. The undesirables may include fatty trimmings from meat, parts of veggies such as stalks and bacon grease or grease left from cooking meats. Sometimes soft fruit or a hard boiled egg or even a stale donut get divided up in the bowls. Then I turn on the porch light also know as the 'open for business sign'. 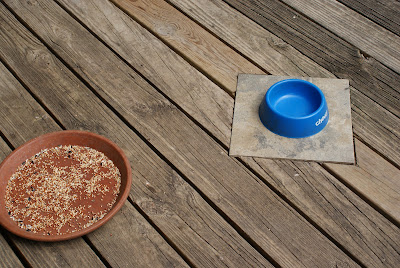 Usually within minutes I see pink noses poking thru the hedge and our first visitors of the evening appear to have their dinner. The  early birds are the opossums. Dark is a medium size opossum with dark, almost black coat and a white face. This is a stock photo that resembles her.

Her companion  is Pretty, a much larger opossum with a soft gray coat and a large soft gray face. Again a stock photo as neither will allow me close enough to take their pictures.

These two get along well together and will share a bowl of food. They only eat what they need, then leave often with food remaining in the bowls. But the food doesn't go to waste. The main entertainment is about to begin. Enter the raccoons. Rocket is still visiting us almost daily and is perfectly relaxed, lounging on the porch as she eats. Her three, now adult, babies also show up every evening. There is Shorty, who is small and nervous. He looks all around for danger as he eats.

Next is Big Red. Red is huge! He arrives, eats as fast as he can cram the food into his mouth, then leaves.

Finally Gabby comes by and is more relaxed like her mom. She is compulsively neat. After she eats whatever is in the feeders, she cleans up any little bit spilled on the deck. She sticks her long fingers into the cracks in the floor boards and eats the pieces that have gotten lodged there. One night last week she pried up one of the tiles inset into the floor of the porch. It was too heavy for her to carry off but she moved it about a foot from it's place.

It's not unusual to see a raccoon and an opossum sitting side by side eating out of the same bowl. In the morning we find all three eating areas licked clean and not a piece of kibble left behind.

One night last month there was a problem, however. When Rob took the second course out before we went to bed, he discovered a large amount of fresh blood on the porch. No animals were in sight and we hadn't heard any noises earlier. We took water out and washed down the area with the blood and wondered what the following evening would bring.

The next night Dark and the raccoons all came by but Pretty didn't show up for a couple days. When she did visit, we noticed that her tail was about two or three inches shorter than before and the end looked sore. In a few days she had healed up but she now has a stubby tail. We don't know who attacked her or why but she is back to coming by regularly and shows no ill effects. Poor Pretty!

This is a combination entertainment and recycling program. The animals appreciate the food and we enjoy watching their antics. Win-win.

Where Does the Time Go?

It's been months since I posted but here I am again. Without a house full of dogs things move at a much slower pace around here, but life still goes on. Mackey went to the doctor last month because she was limping badly again. Several months ago she was diagnosed with tendonitis in her shoulder. It seemed to get better but then the limping and constant licking started. She had an exam and blood tests done and I was surprise by the outcome. Her shoulder seems to be better but she has an instability in her elbow. Dr B placed my fingers on the joint so I could feel the popping when he moved the leg. He put her on meds and says she'll have to stay on them as this condition will always be with her. 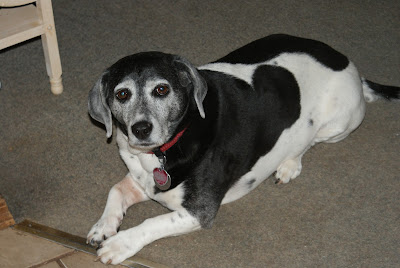 She takes her meds nicely each morning and is getting along pretty well. She limps around the house but outside she seems to forget the pain and runs and jumps and digs like crazy. You can see the spot in the picture. She has licked it so much that the fur is permanently tinted pink.

Speaking of Mackey, For the last four years she's been experiencing seizures on an irregular schedule. In 2020 I started giving Norma Jean CBD oil for her neurological issues. I decided to try it on Mackey too, so she got a few drops each evening on her dinner. She had no seizures in 2021. Then in December we ran out of CBD. In January Mackey had a seizure. Needless to say I immediately ordered more oil and there have been no seizures since. Coincidence? Who knows? But just in case Mackey will continue on the CBD oil.

Spring is trying desperately to get under way here but winter keeps pushing back. We're getting dizzy from the roller coaster temps, 75 one day and 40 the next. Yesterday was 76 and today is chilly and rainy. Tomorrow is supposed to be 46. Still the plants and trees are doing their best to bloom. Yesterday we had a few Forsythia in bloom. 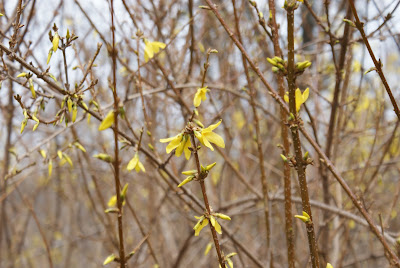 And the plum tree is ready to pop as soon as the weather stabilizes. 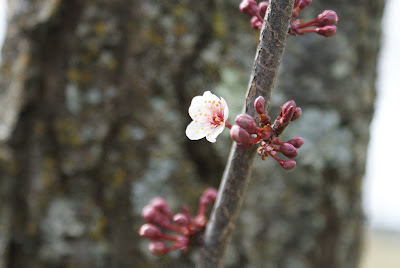 I've been stitching away during the cold evenings. For some strange reason I've become obsessed with sea creatures and lighthouses. I made this lobster. 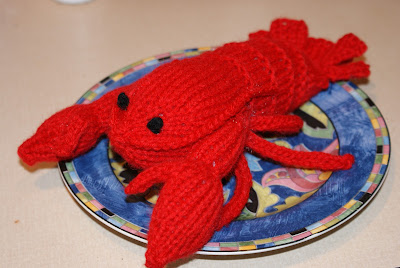 Then he needed a friend, so here's a crab. 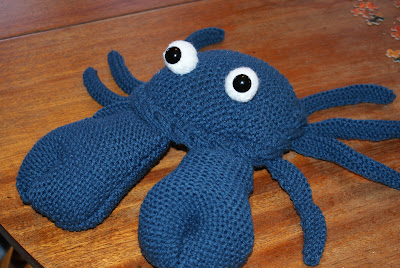 Next I turned to lighthouses. 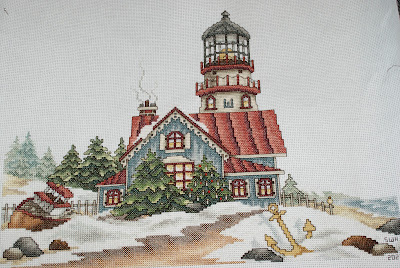 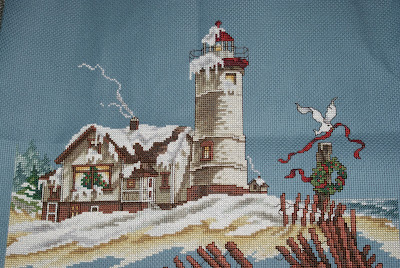 We still have our nighttime visitors and tomorrow I'll tell you about their adventures. They keep us laughing. 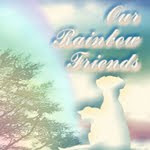