Today we had an emergency visit to Dr B. Over the last few days it's seemed to me as if Samba was having a problem with her vision. 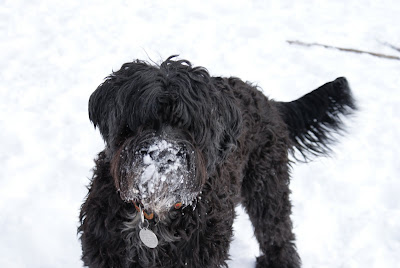 The picture above is Samba in better times. For anyone who hasn't been a reader, Samba was diagnosed with Masticatory Muscle Myositis last November. MMM is an auto-immune disorder where the body tries to destroy the jaw muscles. Eventually the dog with MMM untreated would be unable to open it's mouth. We caught Samba's early and have been treating it with high doses of steroids.
In March we had a double whammy. Samba developed facial paralysis on the left side of her face. It happened spontaneously and no one knows why. The same month we learned that she had a low thyroid reading and started her on medication.
Samba's left eye has been affected by the paralysis and she lost her ability to blink. I've been putting ointment in her eye twice a day to keep it moist.
Last week I noticed little signs that her vision was off. When she runs, she drifts to one side. She's been walking into things, furniture and doors and Monday she fell down several steps that she just didn't see. I had a consultation with her vet Dr B on Wednesday and we were concerned about something going on in her brain such as a tumor or infection.
This morning we went for an examination and the news while not what I was hoping for, wasn't as bad as it could have been.
Samba is getting a blink response back in her left eye. The eye is responsive to light and she can track a little which was not possible a couple weeks ago. The sagging on the left seems to be a little less. It's possible that the left facial paralysis is reversing and may eventually go back to normal.
The bad news- Samba now has right side facial paralysis. There is no blink reflex in the right eye and she's not tracking with it. The lip on the right side is starting to sag and she's currently in a position where one side is getting better, but isn't normal yet and the other side is getting worse. She is drooling more and having vision problems. She's also making a disgusting snorting noise as her nose isn't working normally on either side. 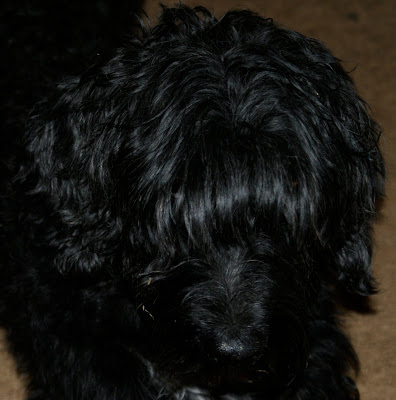 Samba is a trooper and somehow we'll get thru this. She's now getting ointment in both eyes daily to help with moisture. I'm watching her eat very closely, as it's hard for her to keep food in her mouth when she can't feel her lips. We increased her thyroid meds today and in two weeks she'll spend the day with Dr B having blood tests and getting her eyes dilated for examination. Then we'll speak with the experts at the vet school to see if they have any suggestions on how to proceed.
It's been a very difficult year for my girl and she's certainly not out of the woods, but we'll do whatever we can to keep her happy and active.
Posted by Sue at 1:54 PM

Oh dear. But not a tumor and there is a stop-gap plan AND a course that might lead to successful treatment...

Licks and love from Sissy & Gretchen. Gretchen loves to lick doggy faces, but I've assured her Morgan will take care of that for her.

A big hug to you, because I know this is hard for you too.

I don't have words. Thankful that her one side is getting better. I wonder if it's an infection - but what do I know?

Love you honey - take care of you. Will keep everything crossable crossed for you and your pack in the coming weeks. g

Oh poor Samba. As you say the news could have been worse but still not a great time for Samba.
We wish her well and hope her facial paralysis recovers.
We know the problem with no blinking as Bailey is blind in her left eye and it doesn't blink - Martha does her bit by licking her left eye for her!
Give Samba some big drooly basset kisses.
love
Martha and Bailey xx

Oh my. Samba is really going through so much and we know you are too. We will keep our paws crossed for positive vibes! Lots of love, Debbie and Holly

Poor Samba. What a worrisome time for you Sue. Sending big hugs to everyone. Hang in there and lets hope that she surprises every one.
x

Samba (and you) are going through a rough patch. We'll keep our paws/fingers crossed that she improves.

I'm very sorry to hear about these troubles and will keep good thoughts for Samba.

Our paws are crossed for you and we are sending you lots of AireZen, Samba!

I hope she gets threw this...but I'm glad it's not a tumor.

Keeping you and Samba in my thoughts.

Oh dear! I just read this, Sue, and I am so sorry to hear about it. My best prayers and good wishes for this much loved dog! I will be anxious to hear more about it.

My background is in dentistry and I have watched many a woman try to put on lipstick after getting an alveolar block and it was darn near impossible - I imagine this is how your Samba feels now - I hope the condition improves.

We have our paws crossed for Samba. It hope the Dr. V-E-T can come up with way to make Samba better. We also send you good vibes for we know that it is a struggle for you to go through this too.
Hugs and lick for you and Samba,

oh poor Samba. it's just not fair when bad stuff happens to perfect animals, like us dogs. it makes our human feel so sad. we're glad to hear at least there is a little bit of good news, but we're gonna send lots of our powerful poodle healing vibes to her. be strong, little pup, and we'll keep you in our thoughts.

poor samb and so sorry for you and rob too, but the love and care you have will help her through, and she will have many a good time with you all. give her a big hug from me and snuffs please and one for you too.

Oh my. Sending good thoughts and wishes to you and Samba.

This is a worry for you but it seems a positive outcome for now as you say. Its good she is managing too eat, even though you are having too help a little. Bonnie sends a hug your way. Julie.C

You so did not need this now with your own surgery coming up. We all have our paws crossed that Samba will show improvement. Hugs, good thoughts, and prayers from Mom.

Samba! I am pulling for you. How frustrating to have your pretty body betray you. I know you are getting the best of care and lots of love. I will keep my paws crossed that things improve.

Oh we're so sorry!!! It's troubling... Please give Samba lots of hugs and kisses from us!!

We are just stopping by to say hi! We love your blog - we hope Samba gets better... It almost sounds like Bells Palsy. We are sending all of you lots of hugs!

Samba, sending hugs.
This sounds like a rare condition.
I hope the planned treatments show improvement.

Oh, Samba! Hopefully the right side will heal just as quickly (or quicker) than the left side has. Such a sweetie. I'm glad she is in your extra-special loving care! Give her a big hug and some belly scratches from me.

Oh my dear. We are new to your blog - we came over from Maxmom's blog to see about your bandana party and read this post. I am so sorry to hear about this problem she is facing (and you as well). I hope they will find a treatment for her that will help. So glad to meet you and we look forward to getting to know you better. We'll find something red and send a photo off.
Hugs xoxoxo
Sammie

I'm so sorry to read about this illness. Could she be having bouts with Bell's Palsy?

Poor Samba! I know how worried you must be. I will say a prayer that things are better soon.