Yesterday was our Dad's birthday. We gave him a card with a picture of a dog that looked just like Morgan on the front. Inside it said "Got Cake?" 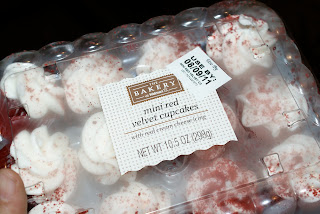 Dad thought it was funny and today he went out and bought mini cupcakes to share with us. Mom said she didn't bake a cake because it was too hot to turn the oven on. Some excuse! 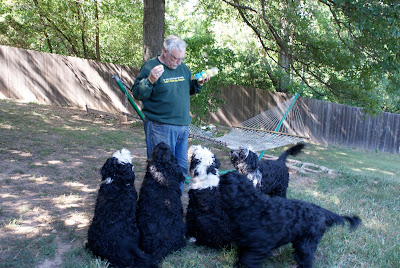 So tonight after our dinner Dad gave us each a little cupcake. The girls and Noah eat first because they all eat fast. They all had to sit. 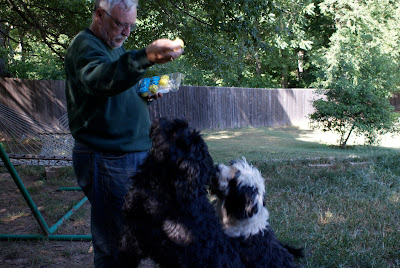 He handed each of them a cupcake. 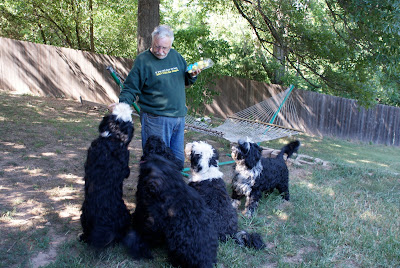 Look at Tessie's tongue. I think she can already taste it and he hasn't given it to her yet. 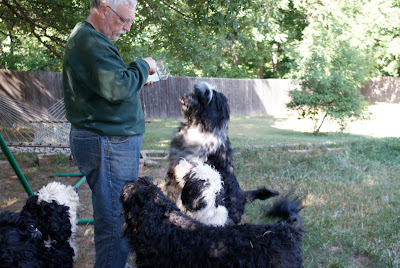 After the girls were finished, the slow eaters came into the garage. First we all ate, then it was party time. 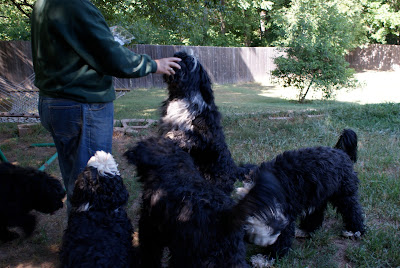 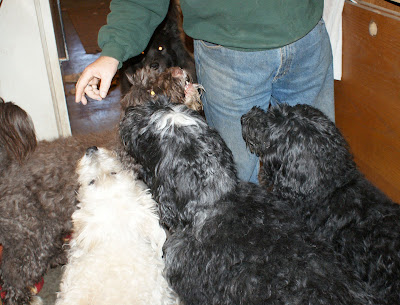 Sky has the same tongue action as Tess. 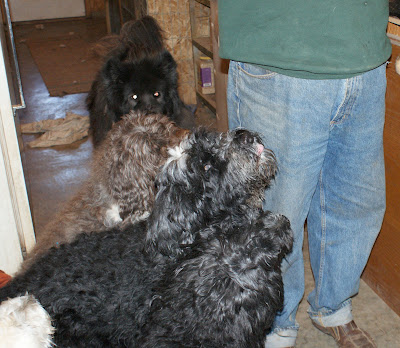 Sky knows how to sit up and beg. Mom thinks that's real cute. I think he's sucking up. 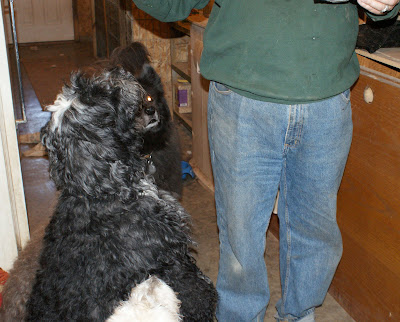 I got a piece and it was so delicious. 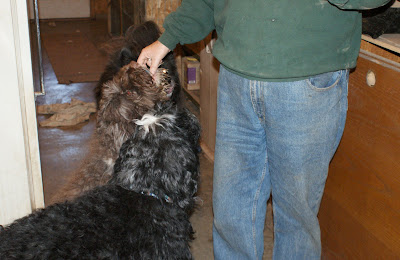 Finally Tsar got his cake. He was the last one. The rest of us practically swallowed ours whole, but he set his on the floor and licked all the icing off before he ate the cake. What a doofus! 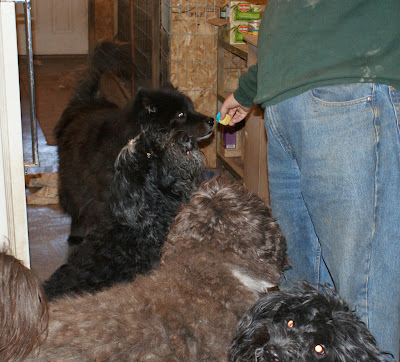 Thanks, Dad for sharing your birthday with us. Next time let's get those big cupcakes.
Posted by Sue at 6:09 PM

We think Tsar is a doofus, too! Mom thinks he's a gentleman-dog. UGH!

Those cupcakes look very good to me and are my favorite next to doughnut holes with frosteen.

So you can come to my party anytime!

Piper is a doofus like Tsar too - at least that's what we gobblers think!!

Wow.. daddy's really cool to get you all cupcakes!! Looks delish!

Happy Birthday, Dad - aren't you just such a nice guy to get all the pups cupcakes or is that pupcakes? Tsar, Phantom says you are just like him, take it slow and easy and make sure there isn't anything you don't like in there.

Great party. You guys are so well behaved. We inhale anything given to us. Can't believe Tsar took his time.

He even shared!! What a cool Paw
Benny & Lily

That's looked so yummers - isn't it nice when the peeps share their noms with us!!

Happy birthday to your dad! That was sure nice of him to treat you all to cupcakes! yummmmmmm

MJ uses the same mini-cupcakes for her fur-boy's celebrations. Sadly, we found corn starch or corn oil or something on the no-no-Sissy list in the ingredients.

PS - Happy birthday to the pack-Dad!

Happy Birthday to your Dad. Our Dad doesn't share because human food seems to make Bailey sick so he stopped risking it. Great-Grandma used to experiment but it always ended badly.

You guys did a great job helping him celebrate.

Happy Birthday to your DAD!!

Our grocery store sells those mini red velvet cupcakes and OMG they are so delish!!!

The humans here have had those very same mini red velvet cupcakes and think they are yummy.... Happy Birthday to the Portie Daddy!

Happy Birthday, Rob! How nice of you to share with everyone!

Happy Birthday PWD Daddy! It looks like everyone enjoyed your special day!