Fudge Has A Boo Boo

Last week I took Fudge to visit Dr B. He had his annual exam and bloodwork and got a few vaccinations. His exam was good and his blood was great, but there were a couple issues I needed to discuss with the doctor. 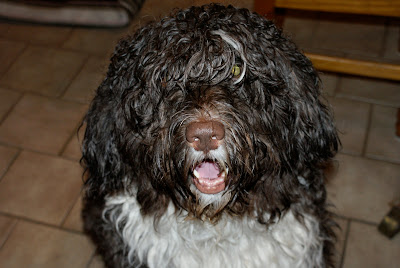 Fudge has been very hard on his teeth. He's broken most of the bottom teeth by hitting his mouth on tables and drawers. He has a couple teeth in the back that collect tartar more than the others. I'd also been watching what we thought was a sebaceous cyst on his head and a small ugly growth on his side.

This morning Fudge happily jumped into the car, not realizing what was coming. He was going to have a dental cleaning and growth removal surgery.

We picked him up about an hour ago and he staggered to the car, not looking anything like the happy little guy we dropped off this morning. He was still heavily under the influence of pain killers and only wanted to curl up and sleep. 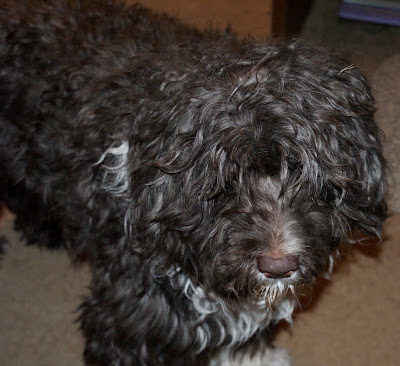 His teeth are sparkly clean and he had some areas on his gums reshaped to prevent bacteria growth. He'll probably be eating soft foods for a few days.

The growth on his side was a small papilloma, but was shallow and easily removed with a local. He has one stitch in it. The growth on his head, however, was a surprise. Dr B thought it was a cyst, but when he made the incision, it turned out to be hard inside, not a cyst at all. He had to increase the size of the incision to remove the  whole growth and Fudge is sporting several stitches in his head. The news is still pretty good, he's pretty sure the growth was nothing to worry about, but we'll watch it to make sure it doesn't grow back. Meanwhile Fudge has a big bald spot on the top of his head. 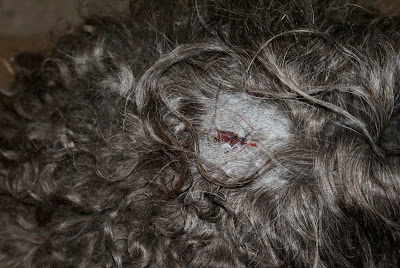 Not to worry, it's only hair and these dogs really know how to grow hair.
Posted by Sue at 6:04 PM

Oh Fudge! I hope you get lots of yummy treats while you are healing! feel better soon - big guy. g

You are such a tough lil guy Fudge. Am glad all is well in Fudgeland and you got so many things done in one day. You sure am tough... and best thing is you have sparkling teethies. My vet is most afraid to put me out to do my teethies cos he is afraid that i might not wake ups.

Get well soon big guy.. and hope you get lotta love and nommies from your momma.

Oh Fudge, poor baby...after all that poking you are going to be snoring tonight
Benny & Lily

You had better start growing hair back, Fudge, now that you have a modeling career!

Reminds me of how stressful Gretchen's spay was for me. She was so small... not even 10 lbs. at the time... I hated the idea of her being put under, having her sweet belly cut...

She locked me out of the car when I picked her up. How? Because she felt so danged good she was bouncing around and punched the door locks... Yes, now the keys ALWAYS go in my pocket or purse until they are in the ignition, with me behind the wheel!

Anyway, Fudge I'm positive you'll work this to your advantage and get lots of special, soft foods, hugs, pets, rubs, etc. I'm glad you have a great vet and an even better mom!

Hi Fudge, you were very brave to have those lumpy things removed. We are sure they wont grow back. I had a lump too and had to have the same thing done but mine was on my neck. Silly old lumps. We hope you gets heaps of nice soft treats and are spoilt rotten. Take care matey. No worries, and love, Stella and Rory

Oh no! Get better soon!

He has so much hair that no one will notice the combover anyway. Hope you're up and about soon, Fudge!

We hope he gets better, furry soon :)

Fudge, we're sorry you had to go through all that but very glad it all went well. Hope the biopsy on the big, hard lump is benign. Jed is especially filled with sympathy; he had to have a root canal last year because he cracked a tooth eating nuts out in the yard. His teeth collect tartar much worse than Abby's do, even though they eat the same stuff - well, except for the nuts. We're keeping our paws crossed for you, little buddy.

Hi Fudge! We are so sorry to hear that you had a boo boo and that you had to go through all of that vet stuff. We hope you feel much better tomorrow!
xoxo Chloe and LadyBug

Poor Fudge... having just been thru a teeth cleaning & removal with Tut, I can relate to the groggy dog you just picked up! :)

Hey Fudge, we hope you feel better soon! Sparkling teeth - great!!
Glad your lumpys are taken care of and paws crossed they heal quickly.
Don't worry about the "baldy" spots. They'll be covered with your beautiful hair before you know it.
wags
ernie,sasha,chica,lucas