Morgan suffers from an anxiety disorder that causes her to act out. She jumps up on counters and into sinks. She turns the water on full blast and she knocks things off tables and desks. She races uncontrollably from room to room  trying to find a safe place to escape from the demons in her head. 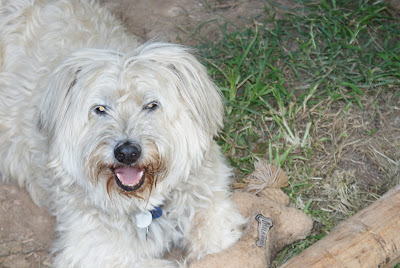 For about five years now, we've been treating her with anti-anxiety drugs. It took us a while to find the right combination that worked for her, but now she takes a mixture of Clomicalm and Valium daily and is doing well.

Still there are certain times when outside forces cause problems for her, such as thunderstorms. Sometimes she squeezes behind furniture and has gotten stuck so that we have to move the furniture to get her out. Sometimes she tries to climb to the highest spot in the room, knocking things over and creating chaos. 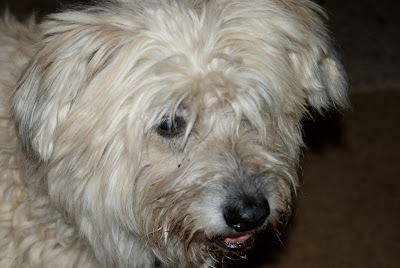 The vet recommended finding her a safe spot to wait out the storm. We tried a crate, but that panicked her even more. We tried a box for her to curl up in with lots of blankets, but she tried climbing on top of it and fell off. We couldn't think of the right place to make her feel secure, but this weekend she found one. We had very noisy, strong winds last night and they were loud enough to wake me several times, but Morgan was fine in her new safe spot. 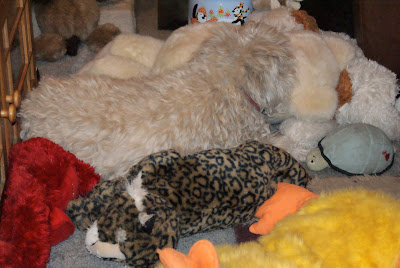 There's a corner in the living room where we pile the dog toys. They have access to them when they want to play, but they aren't strewn all over the house. I lost track of Morgan and went looking for her and this is where I found her. She was snoozing safe and comfortably with her fuzzy friends. She feels safe there and I know she isn't getting into a dangerous situation. 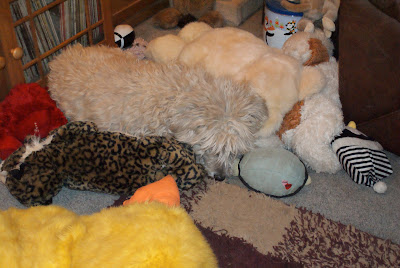 Morgan's is an extreme case, but but lots of dogs have noise phobias and we'd love to hear how you handle them with your dogs.
Posted by Sue at 3:06 PM

Gretchen seems to be developing separation anxiety. It started Thursday when I left for work. It's gotten progressively worse every time we've left her since. She doesn't want to be gated in the master bedroom with Sis, but I also know that left free, she'd want to be with Sissy.

I think it is time to see a trainer. I'll keep you posted.

Poor Morgan. I just bark when there's a loud noise. And Bella tries to get close to HER, we haven't faced such extreme behaviour...maybe we're just lucky.

Glad the old girl has found a safe and comfortable place to hide out.

Poor Morgan! I'm so glad she found a spot where she feels safe. It's hard enough to deal with an anxious person, who can articulate their fears, and this poor girl can't even talk! Hope she continues to enjoy hiding in her toy pile.

Morgan found her safe spot, good fur her! I don't like to be left alone. Max is fine with it, him goes in his crate and takes a nap. I sit by the door and waits fur mom to get home.

How stressful for you, Morgan! We're glad you found your safe spot. It looks like a pretty comfy spot!

I love that you feel comfortable with all your toys!! That's as it should be. We don't like the wind, but mom has noticed that we key off of her since she doesn't like it either! Have you tried the thundershirt? We actually saw them today in Petco.

Poor Morgan - good thing you weren't close to OP last night. We had the loudest and windiest and flashiest thunderstorm that seemed to come right out of the blue. It rained very hard and the wind was ferocious - Mom thought we might get a tornado it was so bad. We are going to go pile our stuffies together and make a safe pile too - that is, if Lightning hasn't destuffed all of them.

thats what I do, BOL..Poor baby.
Mom talked to a service dog trainer lady and also saw this on Cesar Milan/Dog Whiperer. Listen/watch loud movies with lots of noise. The volume starts normal and increases. The lady told mom sometimes in plays for 5 hours. It desensitizes the pup from loud noises
Benny & Lily

I had a bit of a hard time finding Morgan when I looked at the first
picture. I hope this continues to work for her. It seems to me when they solve a problem like this, they are on their way to overcoming it!

Poor Morgan! We didn't know about her issues, but we're very glad she figured out a solution all by herself. When Jed gets stressed, he licks holes in himself, which is damaging, annoying and expensive. Abby is more of an extrovert; she tears up stuff, not herself. Her favorites are books, magazines, anything with paper or cardboard. Or plastic. Wood. Cloth.

I'm so glad she found a safe spot. We're just beginning the puppy journey. Our (quickly growing) little one likes her crate. I'm thankful for this. Over the weekend, when my MIL, FIL, SIL, 2 nephews and a niece came to see the puppy, she decided they were too much for her and ran into her crate.

Awww, that's a lovely safe spot and she looks so relaxed.
Zeus' safe spot is usually at his human's feet, asCLOSEasHEcanGET during thunderstorms...

Oh poor little Morgan. We don't have any experience with these phobias but hope the little pile of soft toys gives her comfort. Sending her gentle hugs. No worries, and love, Stella and Rory

We are happy for Morgan that she has found her safe place. The stuffies keep her company.

Good thing you are her to constantly watch over her.

I am finally getting caught up after being away for too long...again! Glad to hear your gang is doing fine. It sounds like Fudgie was a trooper with his lump removals!

Cooper sympathizes with Morgan, but instead of climbing to a high spot, he digs and digs and digs. He has torn up a mattress and an upholstered chair, not to mention countless blankets and pillows. I think he is trying to dig a hole to hide in when it thunders. I have tried the "Thundershirt" and meds from my vet, but good old Benedryl seems to work the best. He is still agitated, but it's not as severe.

Kisses to your whole gang!