You all know Bailey's Monkey. He's been an important part of our family for quite a while. 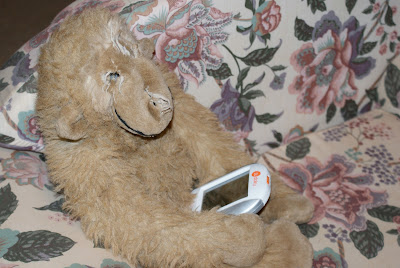 A few years ago I brought home another monkey thinking Bailey might like him, but she paid no attention to him. Fudge carries him around a lot and likes to sleep with his head resting on the big white monkey. 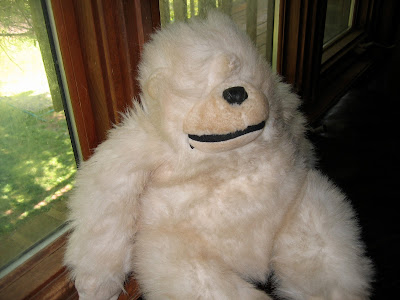 Last Christmas, knowing that Bailey's monkey was wearing out, we brought in a couple of new monkeys for her to choose from. Again she was disinterested and instead adopted her pink bear. 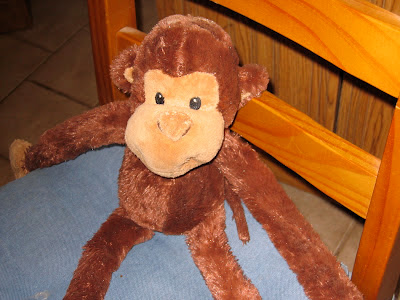 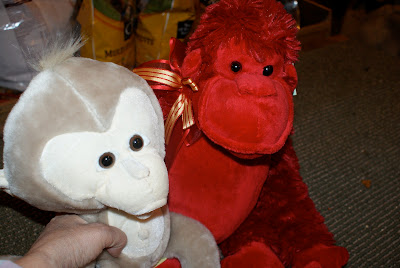 Yesterday Rob and I rescued the little monkey from the street and now he's happily drying in the kitchen. 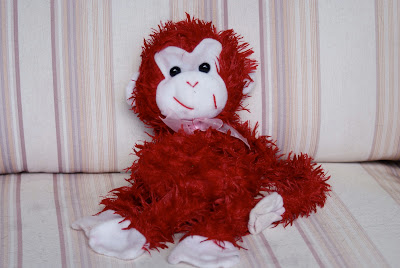 Last night I finished a knitting project. It was a monkey! I had to give up knitting in December because of pain from tendonitis in my right hand. It was difficult, but I didn't knit a stitch for three full months. Last week I picked up my needles to see if I could knit without pain and started a monkey. I was careful to not overdo it and only work on it a little each evening. Last night I put the finishing touches on her and here she is. She's a pattern by Abigail Originals, but I would only recommend her for experienced knitters. The instructions are incomplete and there are no finishing instructions. You're on your own. I like her anyway. 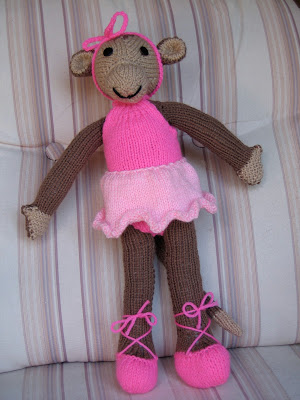 We just returned from an emergency vet appointment with Samba. She has a staph infection in her foot and three of her toes are swollen, red and sore. It came up almost overnight and now she's taking antibiotics and wearing the cone of shame. 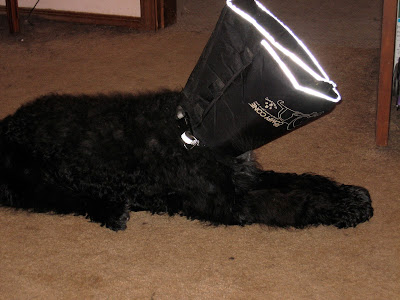 I guess she thought I needed something else to worry about.
Posted by Sue at 4:38 PM

The ballerina monkey is just adorable!
I'm sending you lots of healing vibes, Samba. I hope the cone is gone by tomorrow.

Samba, Samba....where are you? That cone of shame is HUGE!

Love all the monkeys. Bailey will probably fall in love with the knitted one...BOL!

LOVE the monkey. I'm glad Gg was outside though and didn't see the PANK.

Samba; poor baby! love your monkeys...my favorite is the ballerina! Never saw a dancing monkey before...

I thought Bailey would love the little red roadkill monkey (and she might if she finds it by herself!)

Dear Samba! Try to get over your foot owie and that bad staph stuff. Then just stay well for a long time!

So, all the dogs in your house are up to monkey business? I couldn't resist. Sorry.

Your ballerina monkey is really cute. Glad your tendonitis has healed to some great degree. And I hope Samba's infected foot heals quickly; she'll be sad to be unable to play with her friends.

Hi Everybuddy, your knitted monkey is fabulous and we would love to play with it. Paws crossed for dear Samba and that her little toes get better soon. Take care all. No worries, and love, Stella and Rory

At least that's a nice soft-looking cone of shame.

Oh Samba! At least it is the soft cone of shame. Feel better soon.