Life With A Portuguese Water Dog

Porties have become popular recently and a month doesn't go by without my being contacted by someone who is thinking about adding one to their family. They usually have lots of questions and I try to answer them all. I also try to be honest. As much as I love this breed, they aren't easy to live with and I believe in warning people what they might face. 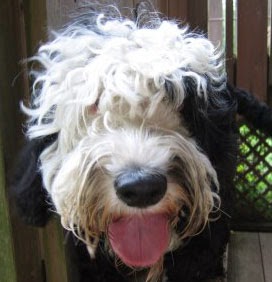 I've lived with over thirty dogs in my life and I've had lots of breeds, Spaniels, a Boxer, Beagles, Dachshunds, a Husky, a St Bernard and dogs of mixed heritage. I've loved them all, but I knew after getting my first Portie that I would never live without one or six in my life. They are different than the other dogs I've known and I'll try to explain how.

Porties were bred for generations to work closely with people. They were crew members on the Portuguese fishing boats and actually earned a salary. Porties were even on the Spanish Armada. These dogs want to  be close to their people and doing whatever the people are doing. This may be great on a fishing crew, but can cause some interesting situations around the house. 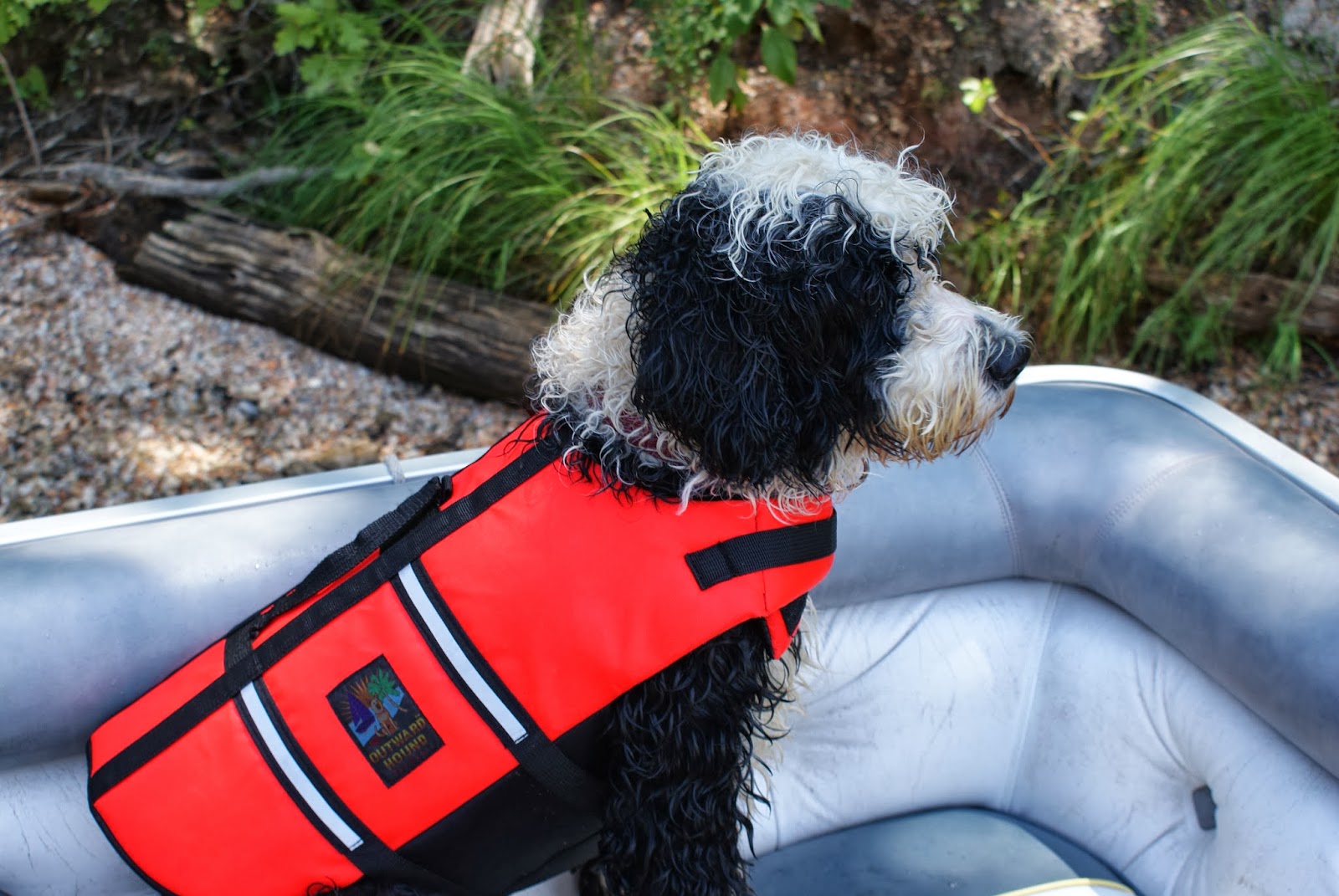 Other dogs I've lived with are happy to doze in the same room in which I'm sitting. If I stand up they may open their eyes to check on me, but they go back to whatever they were doing. Sebastian, Sydney and Mac do it now, but not the Porties. If I  stand up, they all jump to their feet in anticipation of whatever fun activity I may do next. 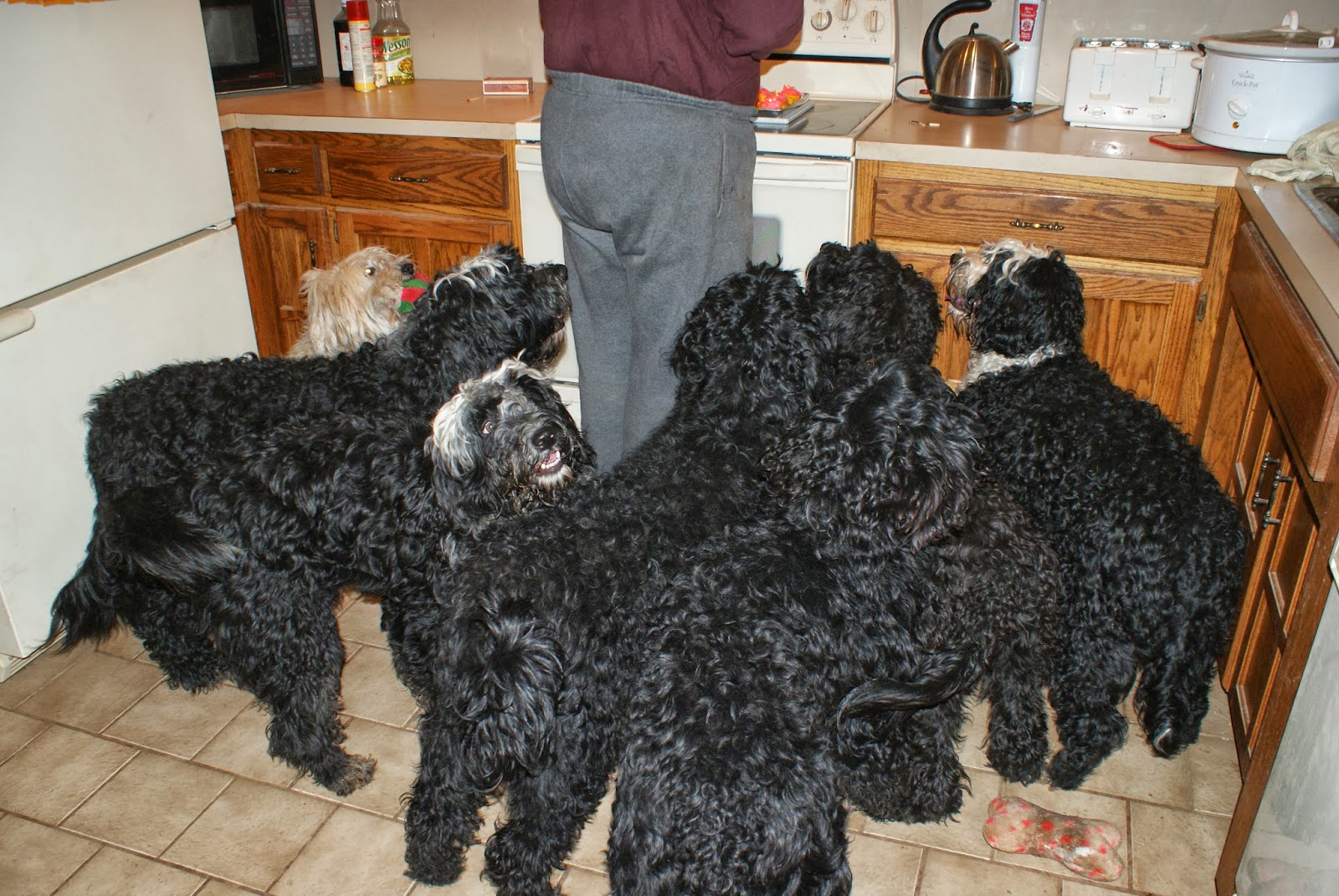 If you're thinking of getting a Portie, your sleeping habits may change. Fudge likes to sleep in and he passed the late sleeper gene on to Sky. But Samba had the early riser gene. As soon as there was a sliver of light and sometimes even before there was any light, Samba would be ready to start the day. We joked that she was up before dawn because that's when the fishing boats went out to sea. Yes, it sounds funny, but imagine twelve to fourteen years of getting up at dawn every single day, or getting up around 3AM to sit on the porch and gaze at the stars. Samba and I did that almost every night. She passed the early riser gene on to all her other pups including Gracie who lives with J. We hear that Gracie not only awakens early but loves to launch herself at a sleepy J each morning for a cuddle. 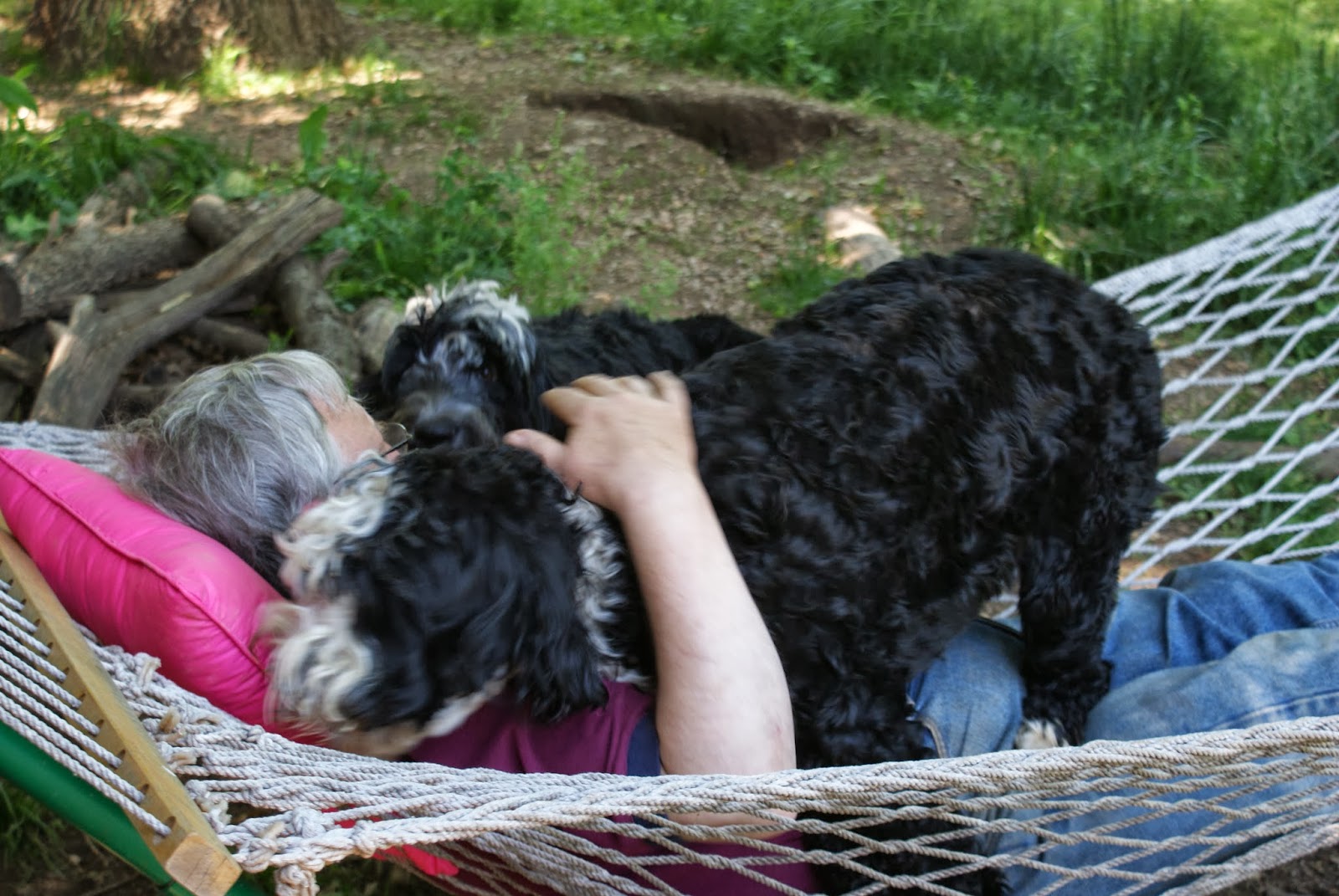 We've all heard that you should never stare at a dog, that they take it as a challenge. Porties stare. They stare at everyone and expect you to meet their eyes. They have gotten in trouble at dog parks for staring at other dogs who don't accept the behavior and respond with an attack. It was unnerving when my first Portie, Bentley, would sit in front of me and stare directly into my eyes, but I now understand that it's an important part of their communication and I love it. There's nothing sweeter than to have your pup crawl into your lap, get his face about six inches from yours and stare directly into your eyes with his soft brown eyes. It feels like he's trying to read your thoughts. 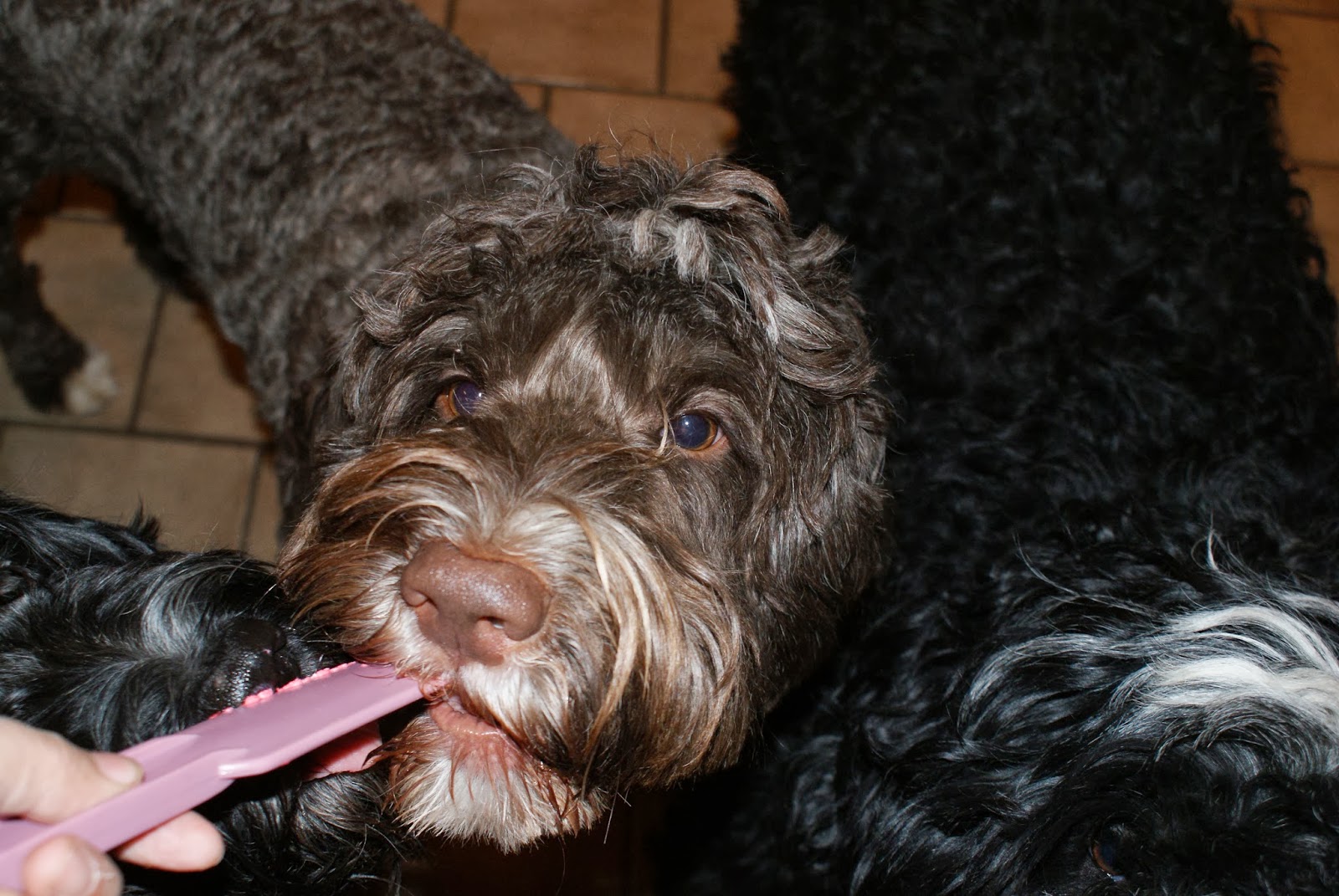 Porties have a well earned reputation as expert counter surfers. We watched in awe as three month old Samba tried to reach a slice of pizza left on the counter. When she realized she wasn't tall enough to reach it, she pushed a kitchen chair over to the counter, jumped on it and grabbed her prize. Even though she was a well behaved dog, she couldn't resist checking the counters for anything left there. She scored a whole turkey one Thanksgiving. It was cooling before being carved. As she ran past me dragging the bird, I grabbed it away from her, rinsed it off and served it. Guess you probably don't want to eat at my house, right?

Porties love to help with the housework. While all my boys are afraid of the vacuum, the girls love to chase it and nip at it and sometimes try to ride on it. They like to check out the laundry basket looking for their favorite items. Sky liked socks but Fudge prefers dish towels. Washing windows may be the favorite chore. They follow me around as I wash windows. As soon as I finish one, they start nosing and licking the glass to give it that attractive frosted look. There is a reason you can't see out many of our windows.

Rob and I are both readers. In fact Rob built a library for our collection of books. There is a gate across the hall leading to the library because the Porties are interested in whatever we're interested in. Samba, on several occasions, removed books from the shelves and digested their contents. Here is one of her favorites. It's titled The Gentle Art of Verbal Self Defense. Perhaps she was trying to improve her verbal skills. 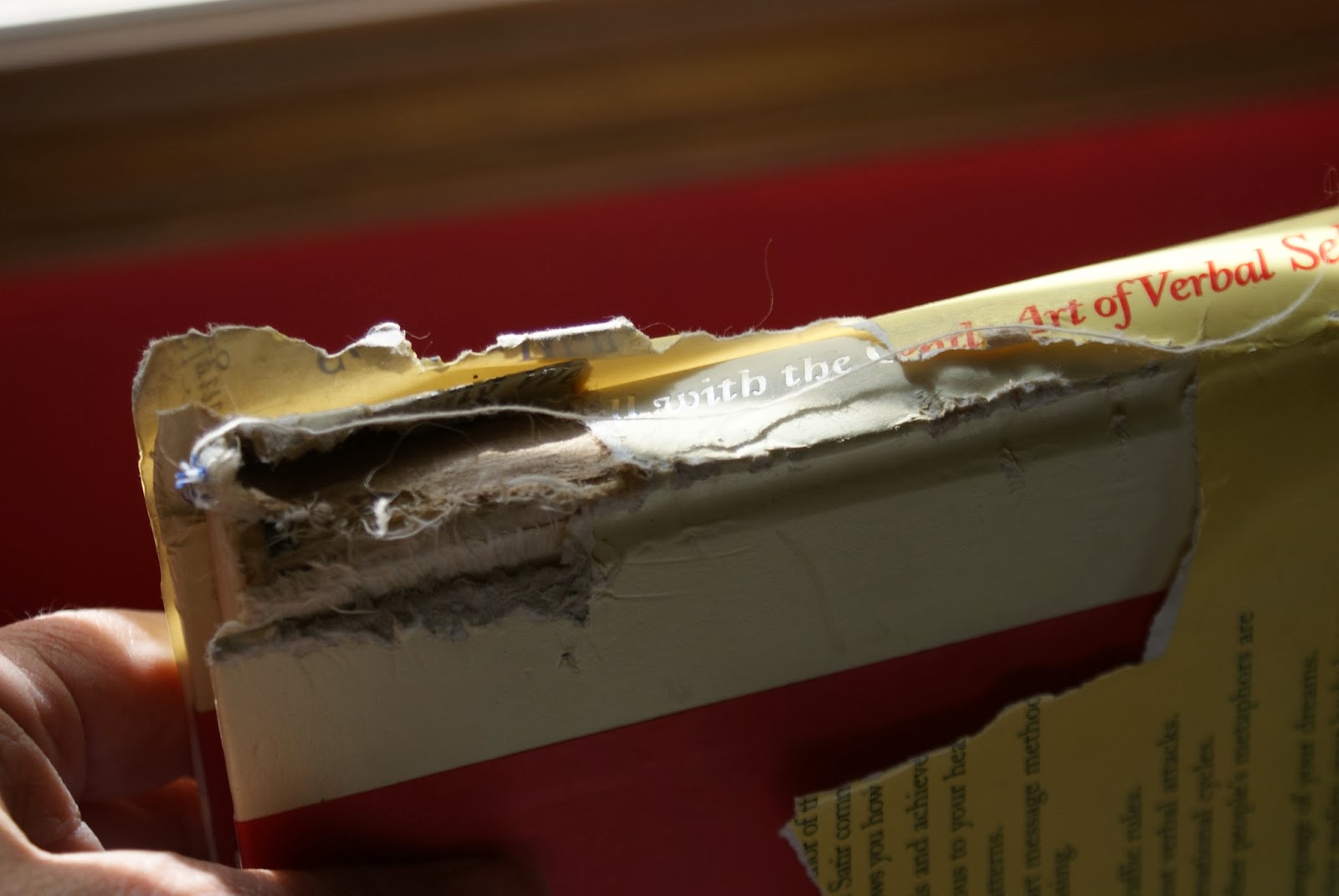 Not surprisingly, Porties love water. They can't resist water. I fill the water bowl almost hourly, not because they drink a lot, but because they have to put their feet in the water and splash it around. Be sure you keep your water bowls on a surface that can survive being constantly wet. 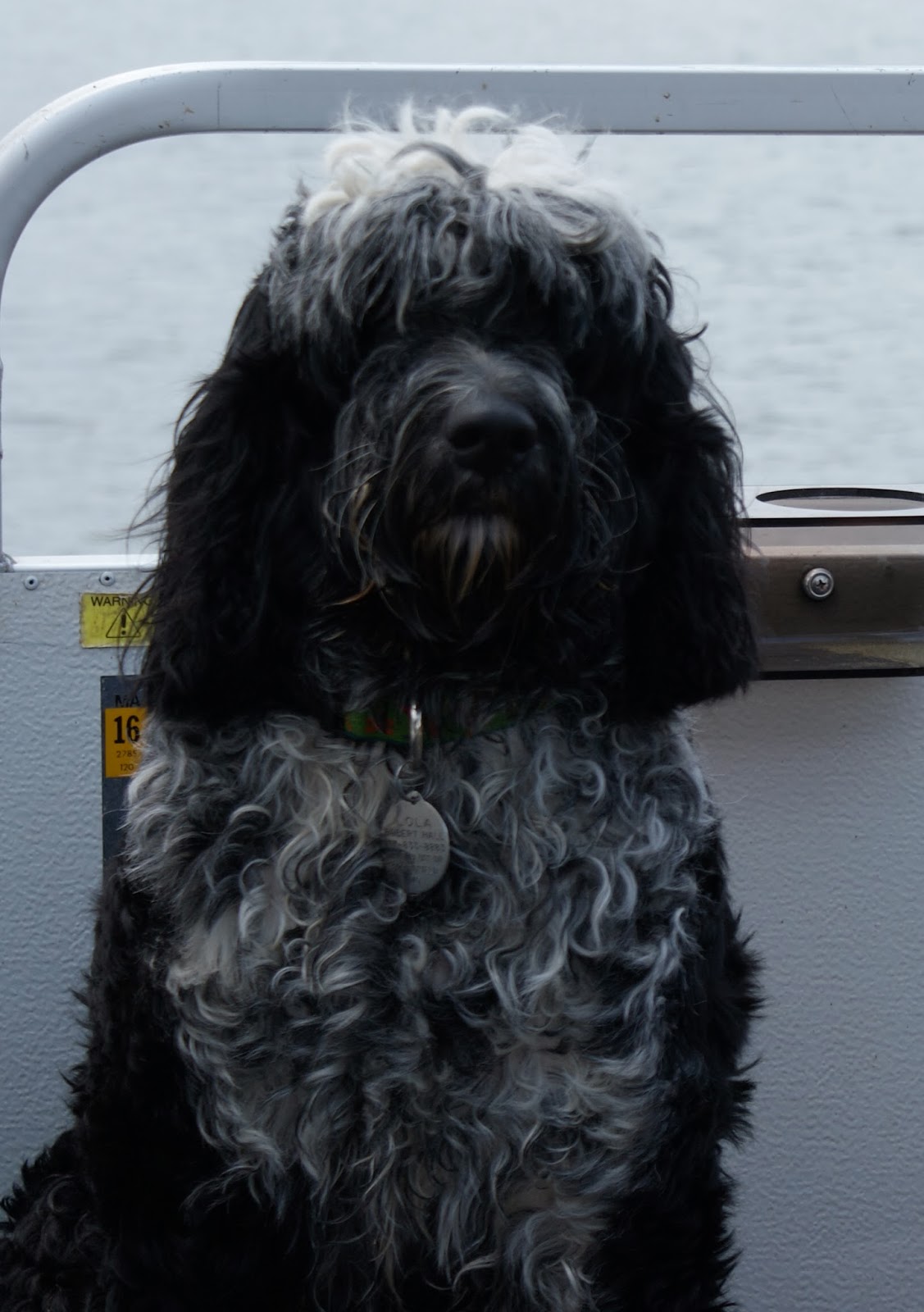 In the house the water bowl isn't the only attractive spot for a Portie. There is the shower. If you add a Portie to the family, be sure you tell any guests to lock the bathroom door if they plan to take a shower. Porties are very talented at opening doors, all sorts of doors. Once they get the bathroom door open, the sound of running water in the shower is irresistible. If you have a shower curtain, no problem, they can dive right in with you. If you have a shower enclosure with a sliding door, don't think you're safe. They can easily nudge the door open enough to get a paw inside. Then you'll have a guest in the  shower with you. Some like to just play with the water on the floor of the shower, some like to grab at the drain as the water disappears and some, like Fudge, like to jump up into the stream as it comes out of the shower head. It may be funny, but it's not easy taking a shower with a Portie. 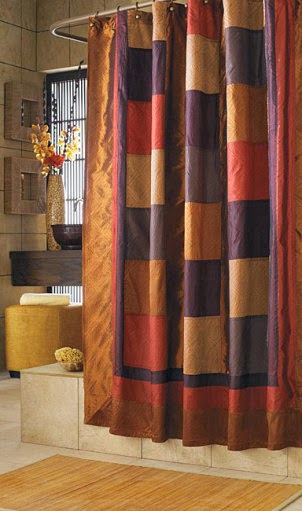 Of course, there is another water feature in our bathrooms and it's a favorite of the Porties. Lots of dogs, who are tall enough, like to drink from the toilet, but how many do you know that stand up and play in the water with their front feet. When we were first married I had trouble training Rob to put the seat down but having Porties has taught him to make sure the lid is down. 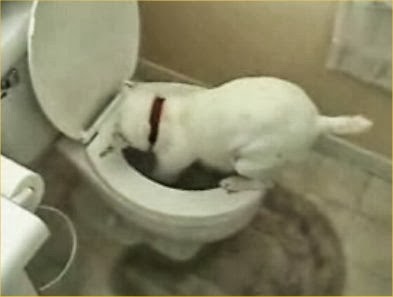 Which brings me to Fudge. Fudge loves water. Fudge also feels that because he is the oldest male in the pack and the only intact male in the pack that he has certain responsibilities. Fudge does 'pee overs'. To him it's very important that he pee on top of the spot where any other dog has peed. Fudge is almost always the last dog to come in from the yard because he has to make sure he's peed over every other dog's pee. Fudge like to accompany us to the bathroom and I'm not sure if he thinks he's doing a pee over or if he thinks because of his status he should be allowed to use the toilet, but I've caught Fudge several times lifting his leg and peeing on the toilet. We now keep the bathroom doors shut at all times. 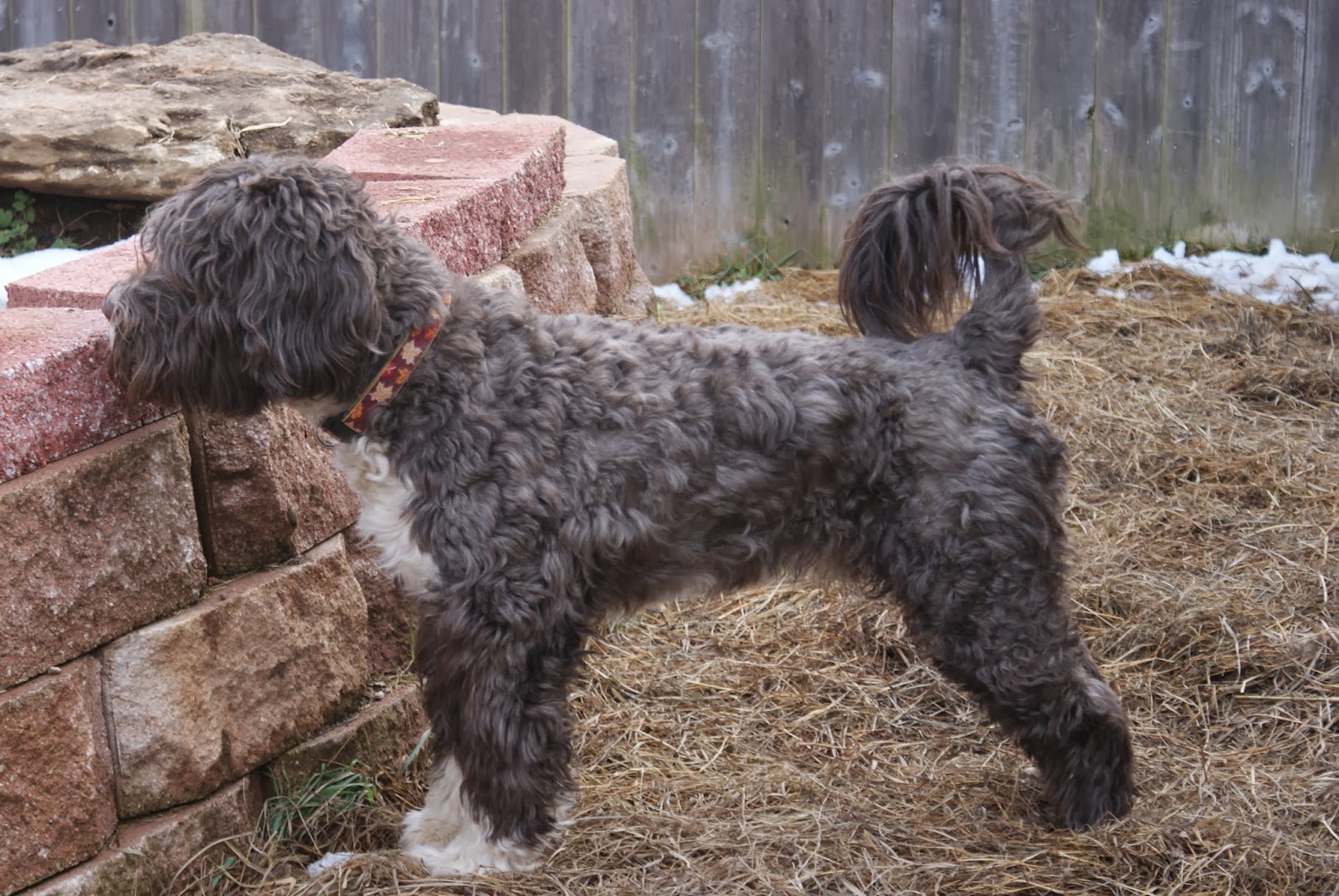 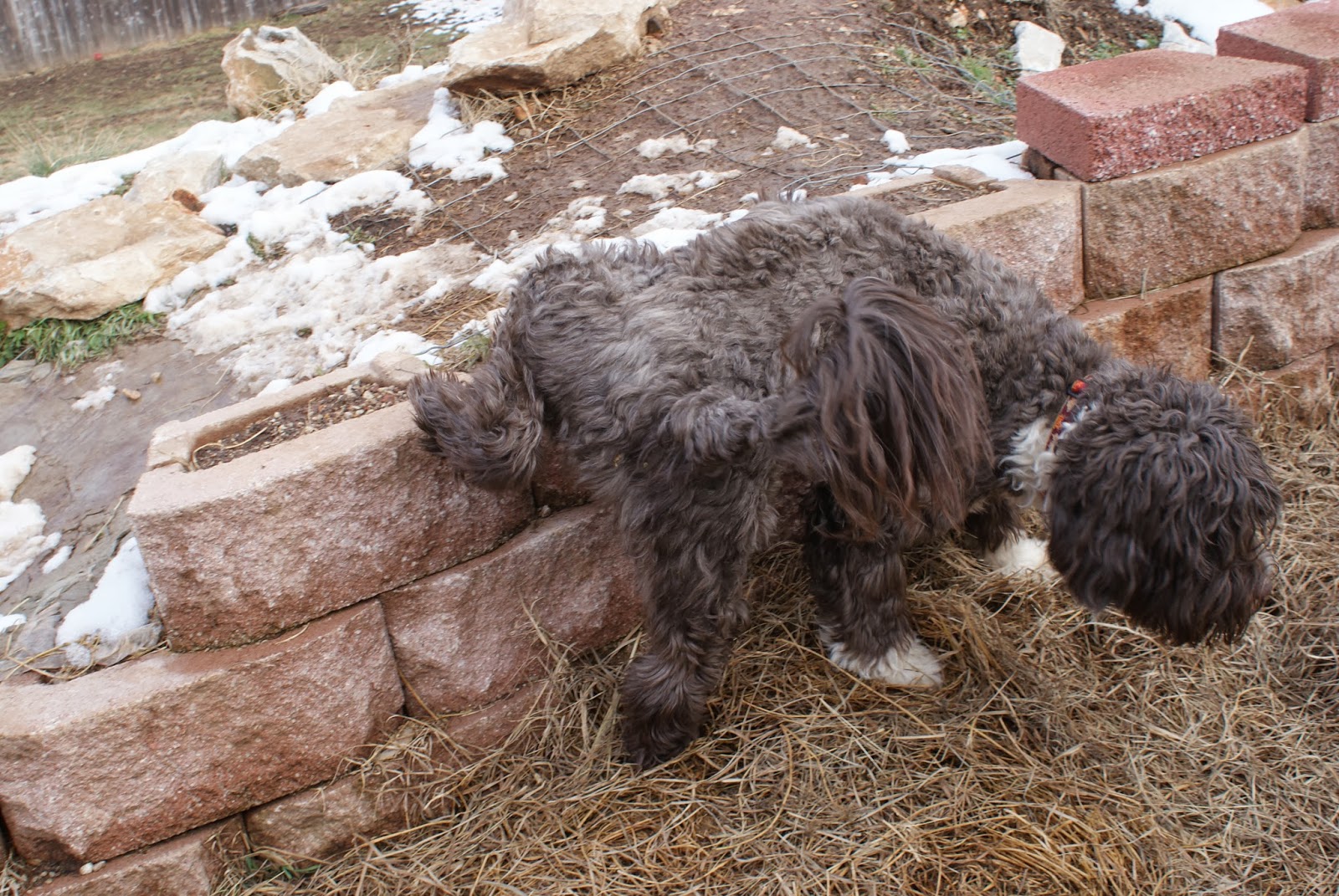 You may be wondering why anyone wants to live with these dogs. They are a handful. They can be stubborn and frustrating. They have endless energy. They are born thieves. But they are sweet and loving and loyal and funny. They are totally attuned to my moods and feelings. They comfort me when I'm feeling sad, they make me laugh when I'm feeling blue. They are ready and eager to do anything I want to do. I am the most important thing in their lives and they want only to be with me and help me with whatever I choose to do. 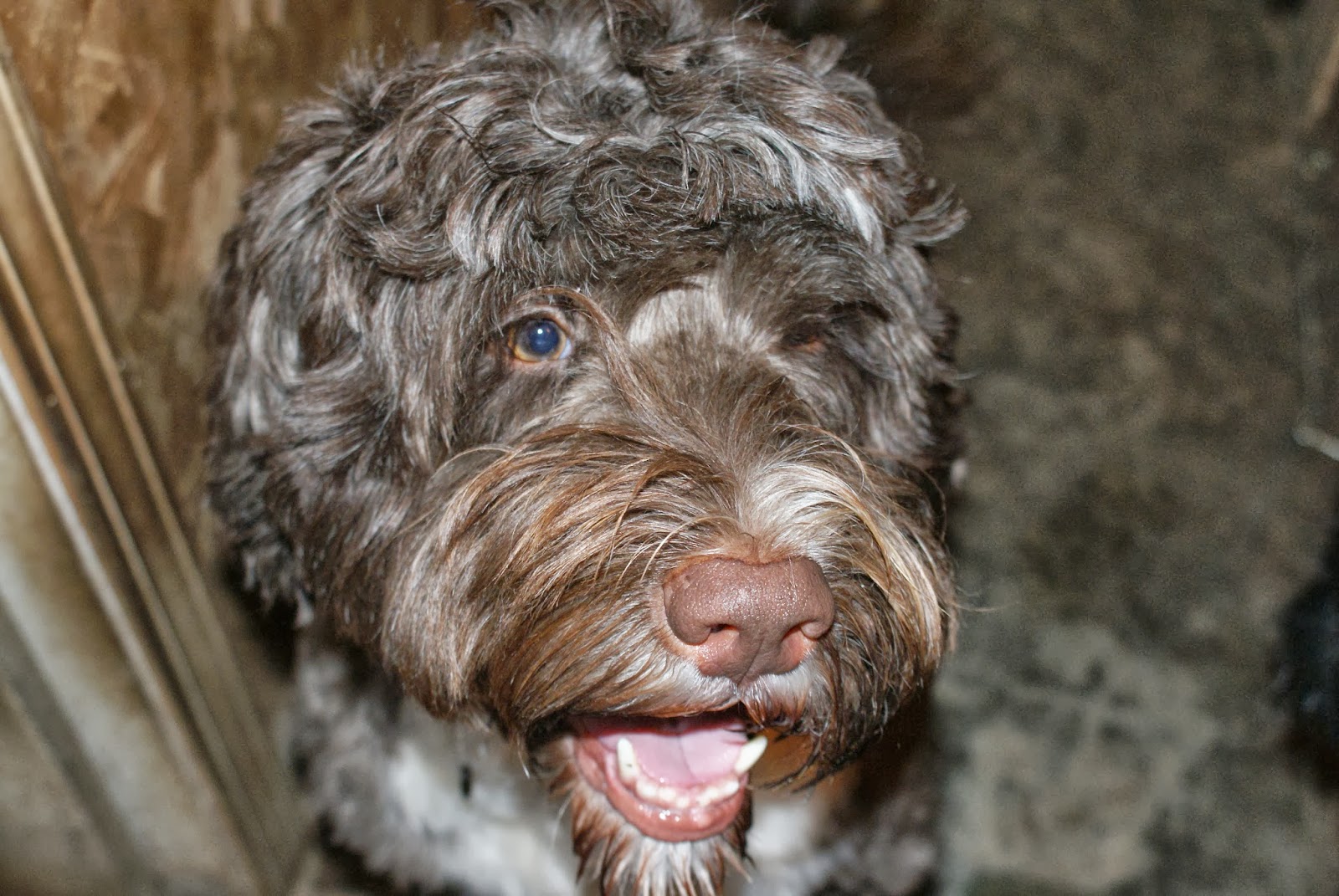 That was wonderful. You've found your breed. I just wish people would research breeds before they buy a cute puppy to see if they can live and enjoy it.

Howdy Mates, what a wonderful post full of love for your Porties. We agree with Scotsmad, everybuddy should research their breeds. We see great danes on rescue sites and for sale and we think it's because people don't realise just how big they get! Take care and have a wonderful weekend. No worries, and love, Stella and Rory

I like hearing that people are reaching out to learn more before getting a dog!

We just adore that last smiling picture! You Porties sound very much like us Airedales- a very fun-loving and energetic group!

They are one cool dog
Benny & Lily

What a wonderful PSA for the breed! :)

What a great introspective on your breed of choice! All dogs should be so well-understood. Neither of my current girls are poster children for their breeds, not in the way the boy dogs were, and actually... I'm grateful.

Loved hearing about the unique, charming, and challenging traits of Porties! It sounds like life will never be dull as long as you have them. I especially enjoyed the Samba stories.

I'm so glad Bentley, Fudge and Samba found you, and that the pups were lucky enough to be born into a forever home! I know that your guys are a wild and energetic bunch, and I can laugh at their antics from afar, although the counter surfing would land me in the loony bin in about 3 seconds. I'm so glad that you tell everyone the unvarnished truth, though, because all breeds have their upsides and downsides, and people need to consider all of these factors before they adopt a dog.

I didn't know you had a Saint. My first giant dog love was a Saint who lived 2 apartment buildings down named Mohammed. He was an epic drooler, but a great walker on the leash for a small, spindly 9 year old like me.

They sound lovely. Really. Yours is a breed I knew nothing about and what a great post about them. Thank you.

I was just gonna say what Mitch and Molly said...they sound ALOT like Airedales!! Really. I remember when the Obama's got Bo, that all the reporters were talking about the Porties and their attributes, and I just kept thinkin', that sounds like an Airedale! Ma always gets, "I used to have an Airedale!" Note: it is ALWAYS 'used to'. And Ma laughs, cause she says Airedales are 'alot' of dog!
As you can probally tell, most peeps have TWO Airdales...Ma wished she knew this secret ~ they wear eachother out!! Since I'm an only child, I just wear Ma out....BOL
Lovely postie abouts the Porties!!
Kisses,
Ruby ♥