You all know that I love puppies, but I also love old dogs. There's such a dignity about those faces with grey hair showing up around the muzzle and the cloudiness in the eyes.

We all hope that our dogs will live long, healthy active lives. But at the same time we hate seeing those little signs of age creeping in. Sometimes they sneak up on us and other times they seem to appear overnight, reminding us that the years are passing.

Zelda was my oldest dog. She was a pup from my first litter and led an active life. She loved to go hunting in the woods with my cousin's dog. We weren't always thrilled with the prizes they brought home, a couple of skunks complete with odor and a face full of porcupine quills. 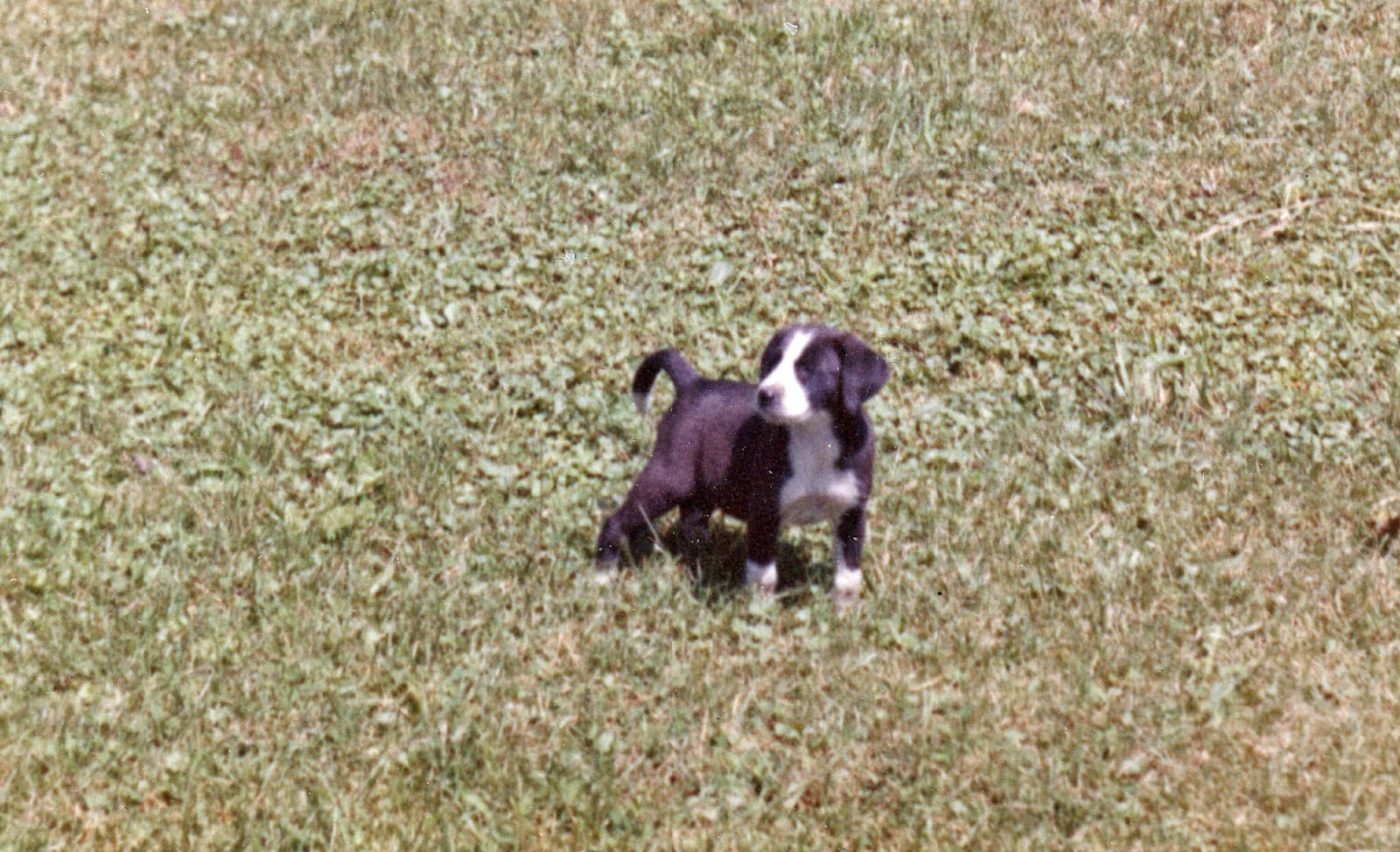 Zelda swam in a neighbor's pond most summer mornings and accompanied me everywhere. She started slowing down around 14 and had some arthritis in her later years, but was remarkably healthy. She died in her sleep at age 17. 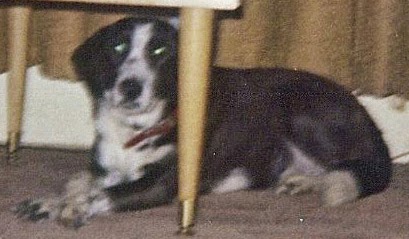 Libby lived to 15. She was my beach dog. She was born in Myrtle Beach and came to live with me when she was 5 weeks old. She loved the ocean and riding in boats. When I moved back to Syracuse she adjusted easily to life in a high rise apartment building. I was happy that she got to live in a house with a yard for her last few years. 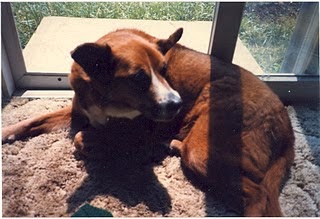 Bentley didn't age well. He lived with a pinched nerve in his back from the age of six and by the time he reached 14 he was pretty crippled by arthritis, but it never stopped him from doing whatever he wanted to do. 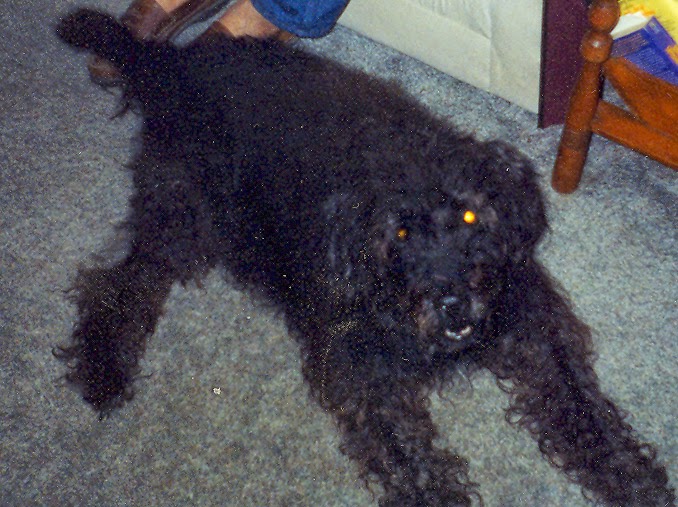 Lucy, being a white dog, didn't show grey hair but she also was slowed by arthritis in her later years. 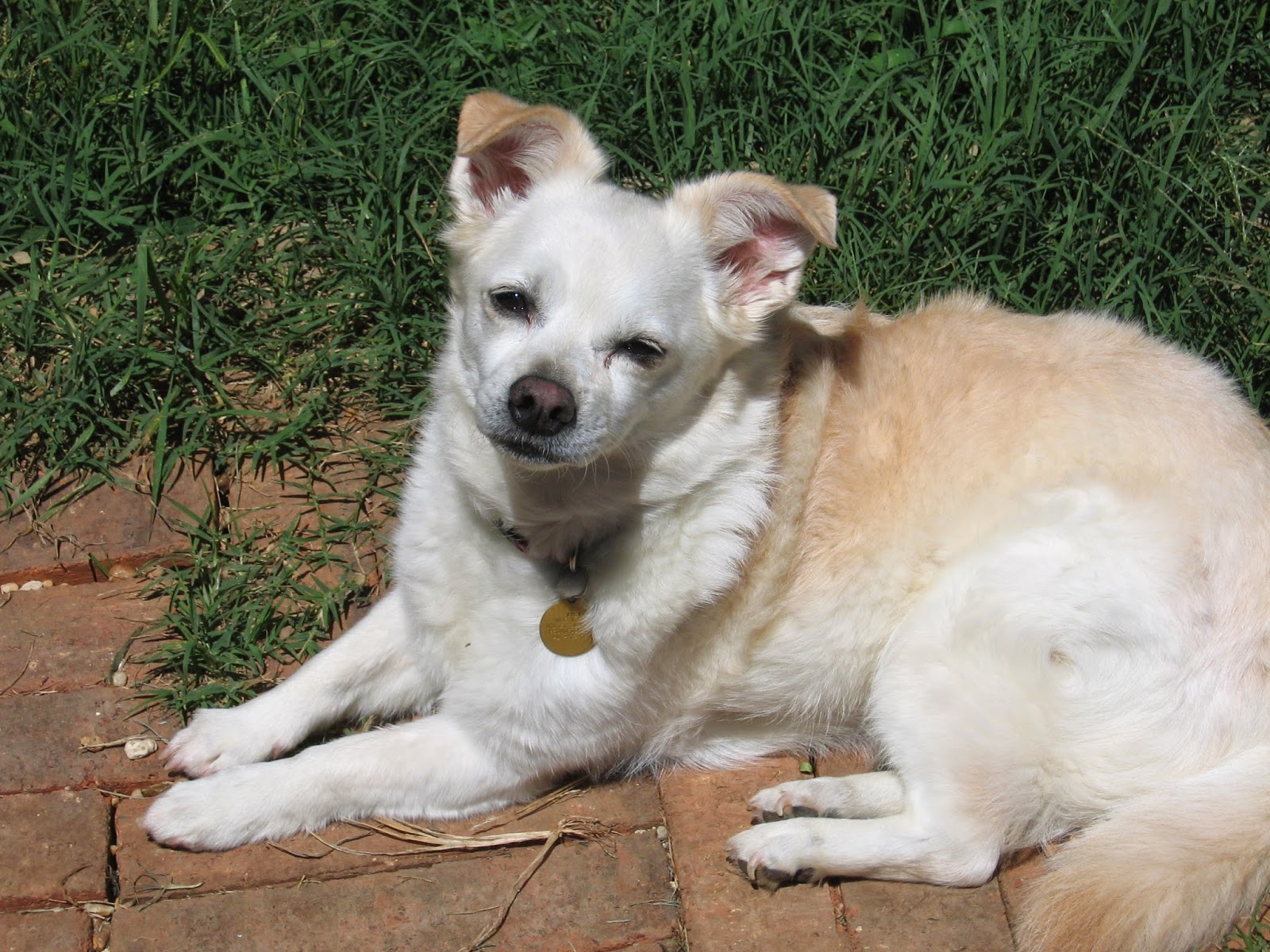 Pylon did grey, even though she was light colored. Her coat just seemed to fade. 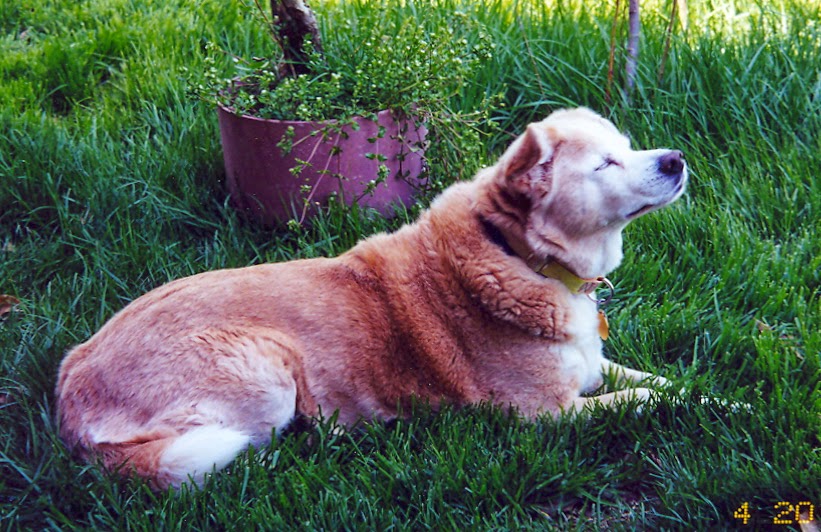 Monty didn't get to be an old dog, he died at the age of nine, but he did mellow and get some grey hair as he aged. 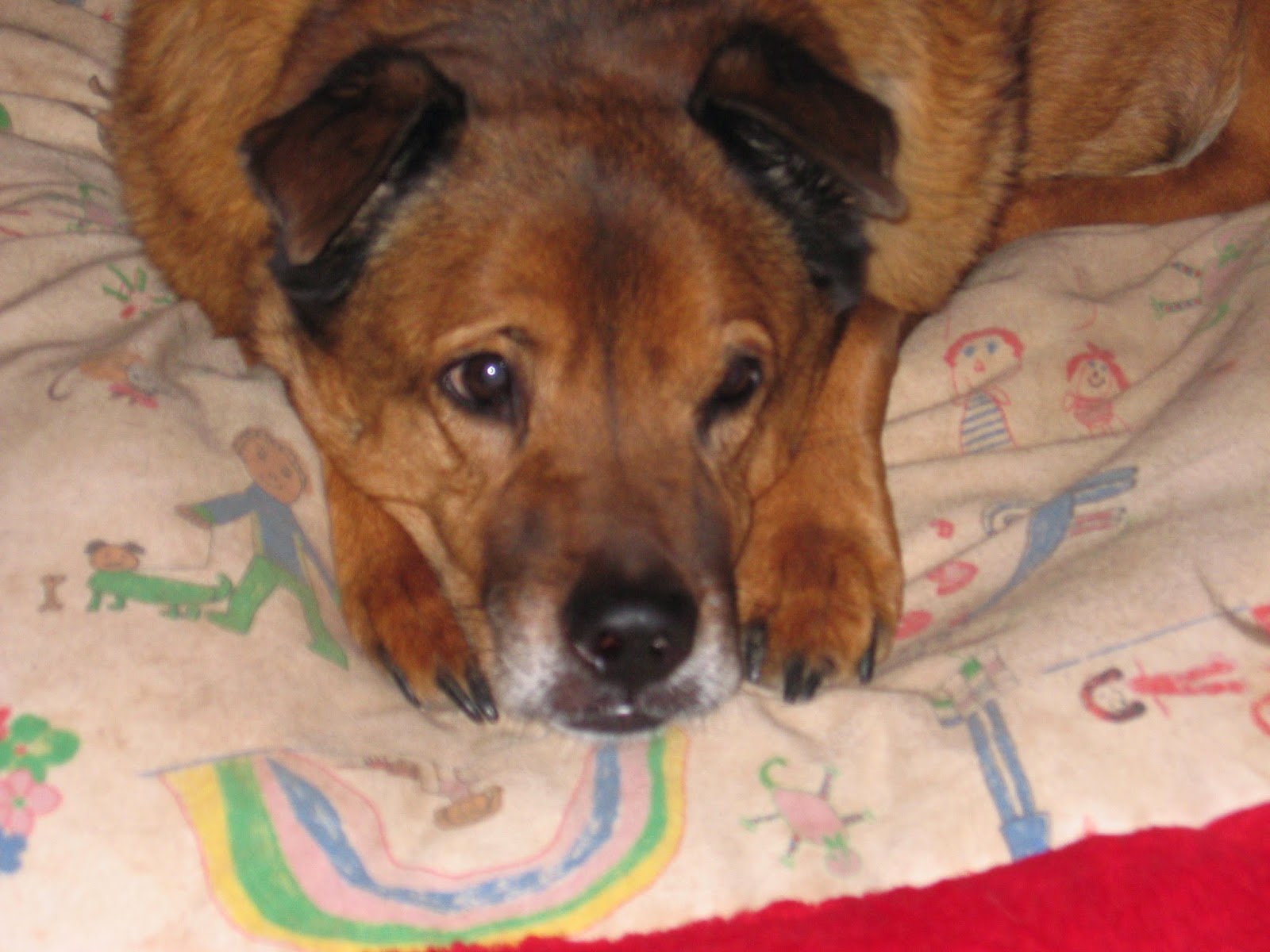 Tsar also died young but had developed a white mustache. 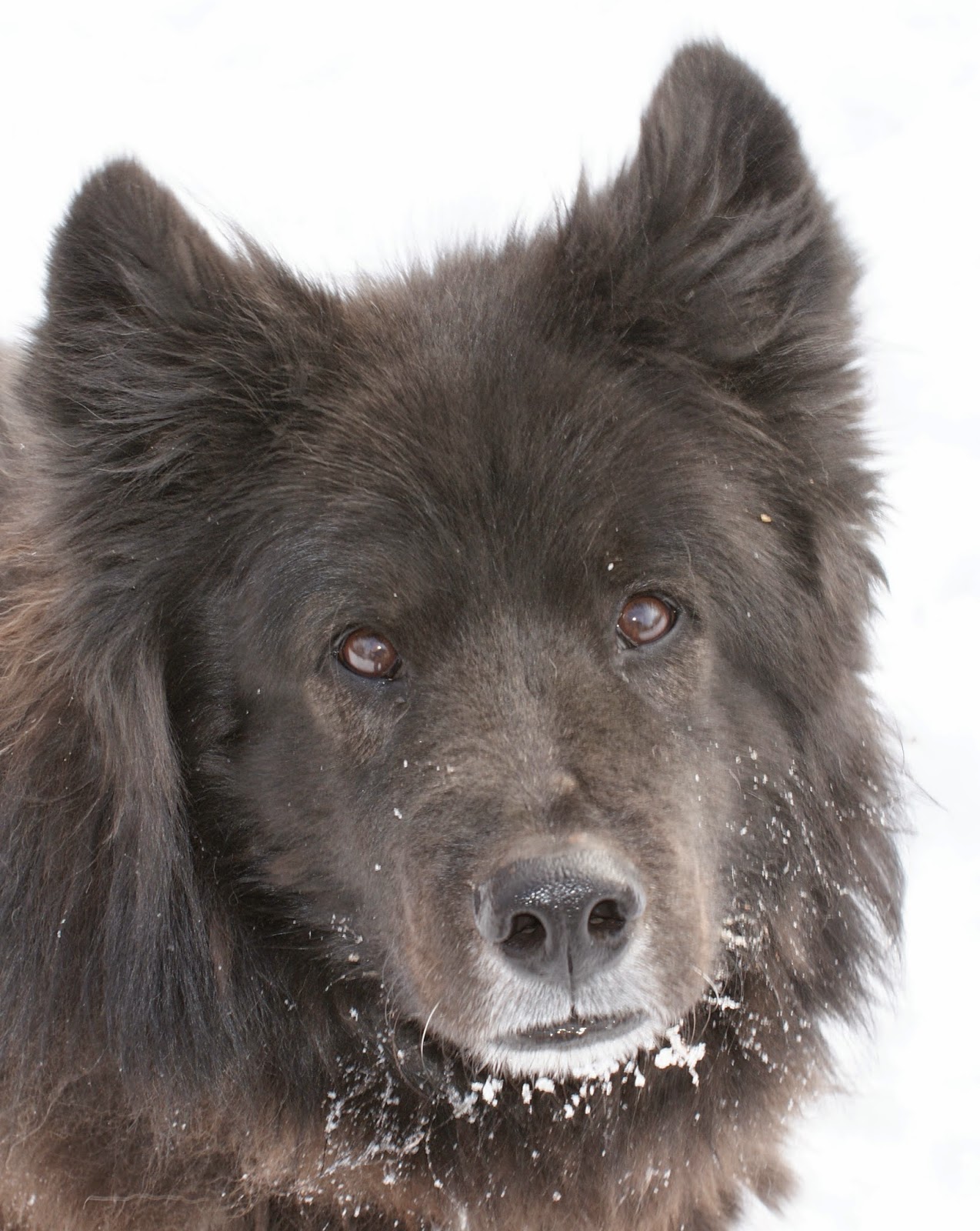 The Porties probably won't show the greying effects much because their coats are salted with white hair already. Porties also tend to push the limits and not slow down much till the very end.

This brings me to Morgan. She's past the recent scare we had with her high fever. The antibiotics apparently took care of the infection and she's feeling well. Morgan shows signs of her age but they aren't all what I expected. Yes, her coat is messy, she doesn't want to be groomed especially her legs and feet, and her eyes are transparent. The color faded from her eyes several years ago making them strange looking, but they still work. 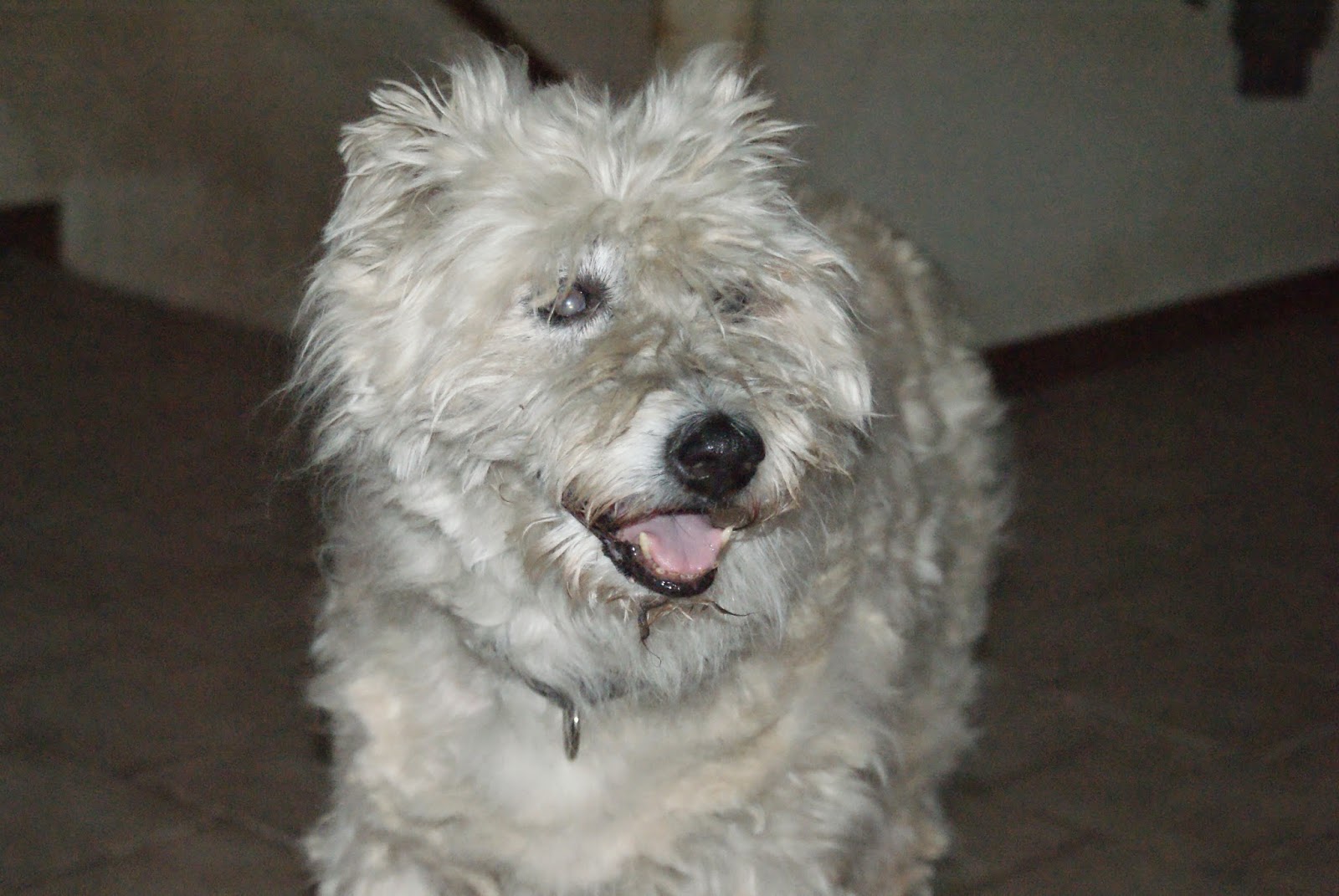 Morgan's day is interesting and somewhat annoying. When we wake her in the morning she's groggy and confused. We have to direct her to the front door because she tends to just follow the other dogs downstairs. When she comes back in, Rob feeds her and Mac. Usually she eats about half her food, then does her aerobic exercises. She finds a blanket, rolls onto her back and kicks her legs in the air.

When I come back upstairs from feeding the others, I give everyone their meds. They line up and because I always go in the same order, they each step forward when it's their turn. Morgan is last because she takes the most. Some days she gets in line with the others and opens her mouth for her pills. Other days she waits lying on the blanket and I have to find her and open her mouth and hold it to keep her from spitting them out.

Then it's time for our breakfast. Rob makes a slice of toast for the dogs and cuts it into little pieces. Sometimes he spreads it with peanut butter. They wait patiently till we're finished, then gather around for their toast. Sometimes Morgan joins them, sometimes not.

Then it's her nap time till around 11 when she tells me she needs to go out. When she comes back in she likes to finish her breakfast. She's wide awake by now and wanders around the house. Sometimes she'll settle down with a toy, sometimes she interacts with the other dogs and sometimes she just paces. It's all OK. 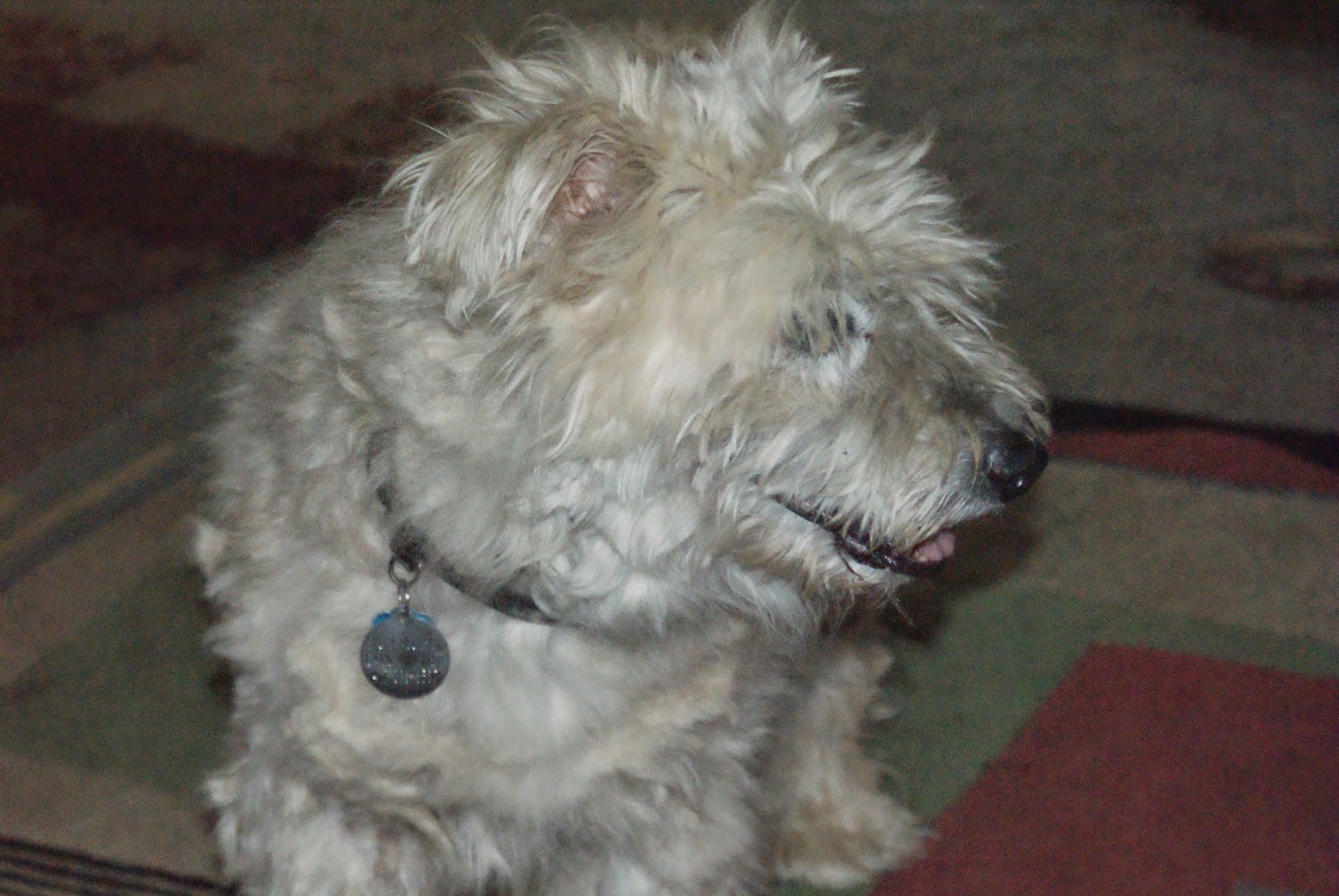 When the other dogs go out to play around 1:30, Morgan goes too. She does a complete circuit of the back yard and if she's feeling good, she'll do two. Then it's time for a quick nap.

At 2:30, an hour before dinner, the torture begins. That's the time each day that she decided to bark at me. It starts with her standing in front of me talking and groaning and making cute funny noises. But it soon turns into barking. I try to figure out what she wants. I check the water bowl and fill it with cold fresh water. I take her out to pee. I offer her a biscuit. I smooth out her blanket, but none of these things stop the barking. She just stands there for an hour barking at me. Rob and I have decided that she just simply wants to bark. It's not easy listening to an old dog bark for a solid hour, but it seems I need to get used to it. 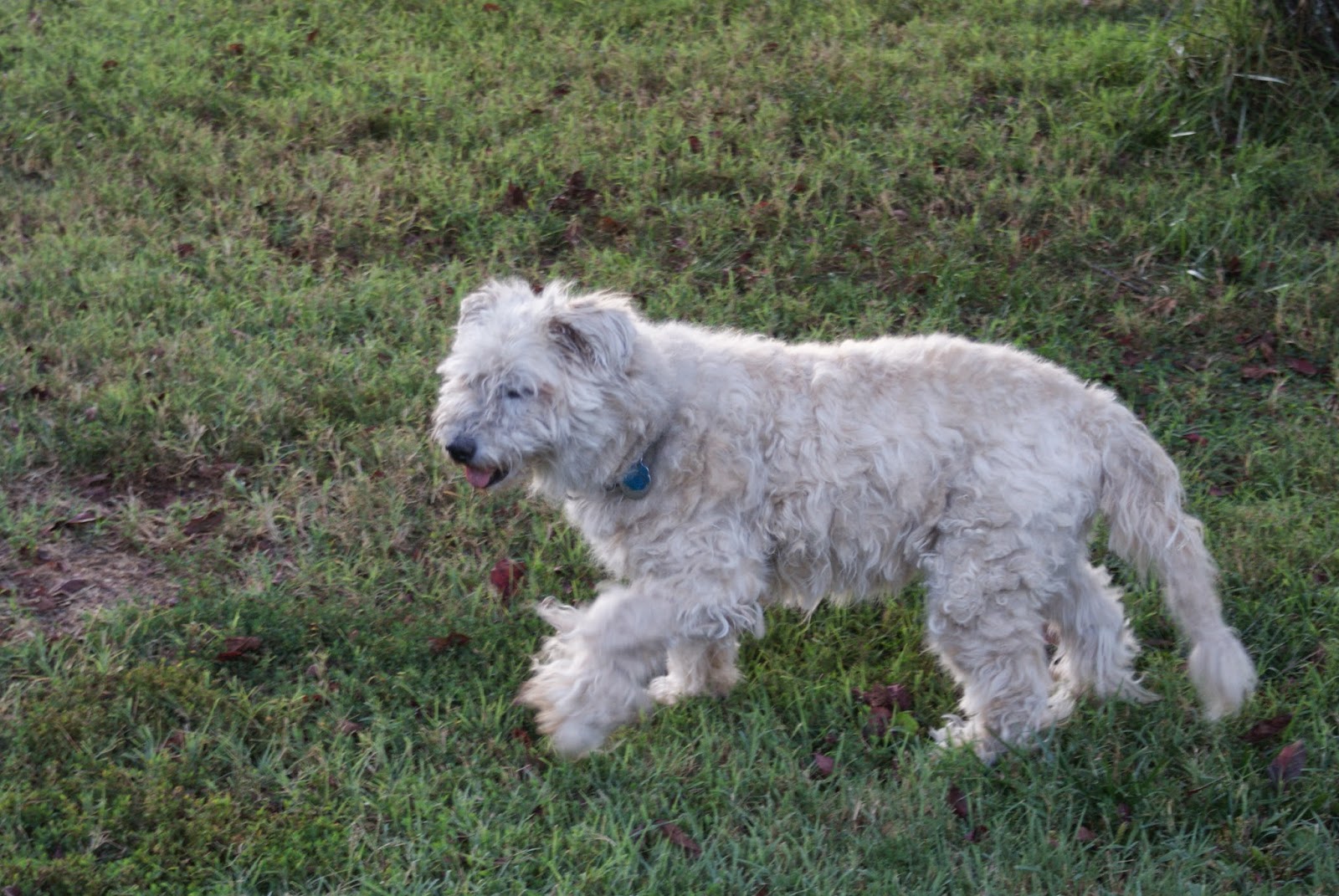 We have dinner at 3:30. We moved it up from 4 so that our nasty neighbor won't have to experience being barked at when she arrives home. After she eats, Morgan wanders in the yard a little, then settles in for the evening. She sleeps quite soundly, as most old dogs do, and when we wake her at bedtime, she's confused. We have to point her in the direction of the yard, then up the stairs to the bedroom. She knows where her bed is and she's once again arranging her bedding and toys for 10 or 15 minutes before lying down. Last night I was busy getting Mac and Syd settled for the night and when I went to help Morgan, she was lying in the shower. I had to get her out of there and back to her own bed. We have to keep the bathroom door firmly closed because for some reason she insists she wants to sleep in the shower.

Living with an old dog is challenging, but it is so worth it. Even being barked at for an hour each day is better than the alternative.
Posted by Sue at 3:57 PM

There's nothing like a golden oldie! Cinderella will be 13 this month, and she's just getting better with age. Sure, her furs have gotten all gray, she sleeps a lot, she takes 87 million meds, and we go real slow on walks with her now. But there's nothing like the LOVE in a senior dog's eyes!

We do believe she just letting you know how much she loves you for what you do for her, thats the way we work, yes we dogs have funny ways!

Well, I'm glad Morgan has improved over the last week. Thor lived to a ripe old Mastiff age, but we lost Baby Brutus at only 5 months. That was really bitter. At least when they get to be old, we feel we've gotten a goodly - never enough, but goodly - amount of time with them.

Nasty neighbor eh? My dad says that we can bark at all the ugly people. And wow, there sure are a lot of them here. Maybe your kids are barking at the neighbor because she's not very nice looking. My dad likes to take my red wagon out with me in it just to annoy some of the neighbors because they'd never spend THAT much on a dog.

What a beautiful bunch. It's funny how every buddys personalities are so different
Lily & Edward

Ma laughs cause she says Morgan and I are twinsies! And she wonders if when I gets to her age if I will bark for a whole hour too! Probably. I likes to bark..and whine..and groan..and well you name it! I usually bark at my foodables though...Ma finds this weird. She also find it weird that I have to play with my food too. whatever.
Butts Morgan, I totally gets the 'no groomin' of the leggies and feets'!!!! OMD, I HATES it! Why?! Oh Why do they need to do this???? Just leave them be, I say.
Morgan, I aspire to be you when I grow up! Ma says I will..AM.
Kisses,
Ruby ♥

There are annoying things, but when you see that the pup is still enjoying life, it makes it worth it!

Morgan just has a lot to say! We love our seniors ♥

I love this post... and your last sentence is really heartwarming and so true. <3


Liked this post about your special senior dogs. The love and care they had thru their lives is what all should have.
Barb and the furkids. :-)

Thank you for sharing your senior dogs with us. Fred went on a barking bend almost daily - very close to the same time, actually - as he aged too, although he wasn't so old at 12.


Enjoyed reading this post Sue--it was interesting to see the daily routine of Morgan as she ages. Your routines sound similar to mine (i.e. shaped around the lives of the little furries). My old kitty Meshach, who is 17 this year has developed a few 'unique' habits. Reminded me of what Morgan does. I've increased his feedings to four per day to keep weight on him, and over the last six months or so, he has began meowing every time he thinks it's mealtime...which is pretty much any old time in his mind. He has a very loud meow... Your post is a good reminder to be patient and kind...always.