We Have A Guest

Today is opening day to vote for Fudge. Rob and I were both a bit  displeased with the way the contest is being run. We would have preferred all the photos be displayed at once instead of having to scroll thru. In case you're thinking of voting, he's number 89 Fudge. We also don't like the idea of giving them so much info, but then we can always fib on that. Who would know? 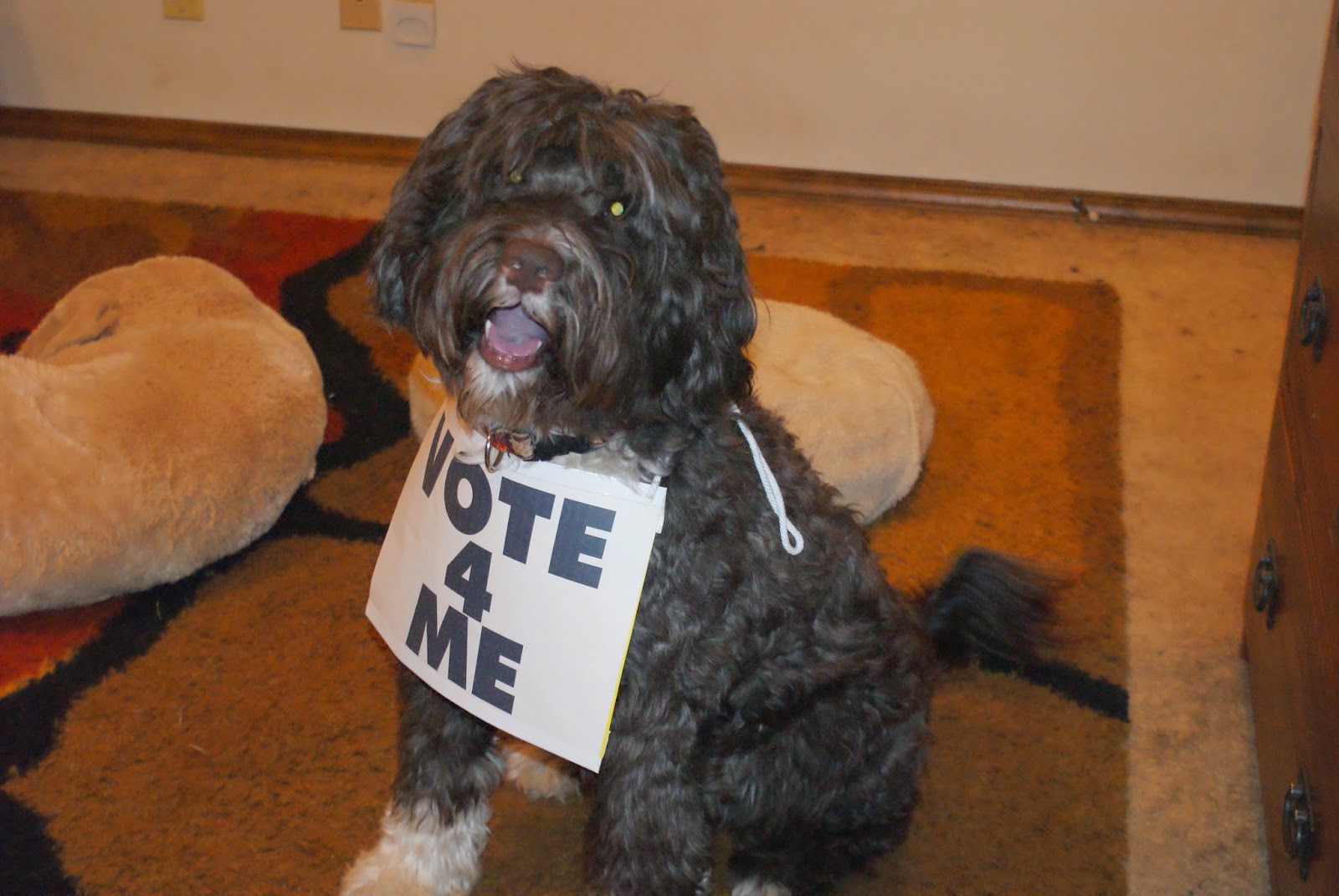 If you're still interested in voting go here. That's a radio station www.alice955.com .  Click on the ad for the Subaru spokesdog contest. Scroll down and fill in the form. You can fib if you want. Once you fill it in, it'll ask what dog you want to vote for.  Fudge is #89. You can vote once per email address (I have three) and vote every day thru January 4. If you don't want to go thru all that nonsense, that's OK, too. Fudge is famous in Blogville and that's good enough for him.

Now, back to our guest. We live at the end of dead end street. Unfortunately there are some not very nice people who think it's a good place to leave animals that they don't care about. Last night at last call time Rob took Syd and Mac out front on leash and I took Morgan. Across the street sat a kitten. Syd saw it immediately and started screeching. The cat ran toward us.

While Rob dragged Syd and Mac, barking and screeching back into the house, I picked up the kitten. He was purring loudly. It was very cold here last night, in the 20s and this kitten looked about three months old, not old enough to be out on his own on a cold winter night. 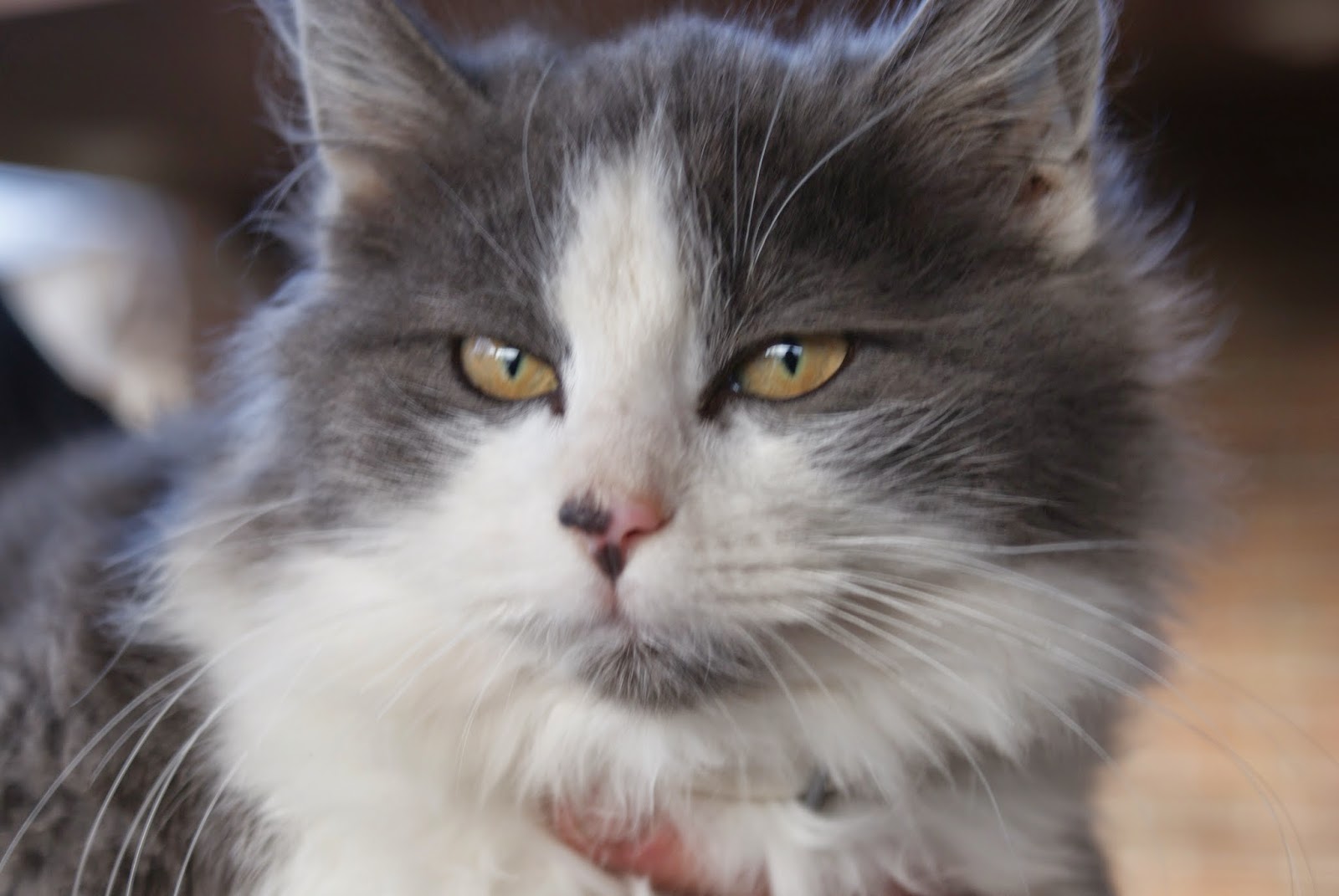 We brought him into the garage, fed him and put him in the puppy carrier overnight. The dogs were out of their minds with excitement. They didn't see him but they sure knew he was there.

This morning we took him by our vet clinic. We hoped someone might want a Christmas kitten, but nobody did. They all held him and weighed him, he weighs 4 pounds and they dosed him with Revolution to get rid of his fleas. 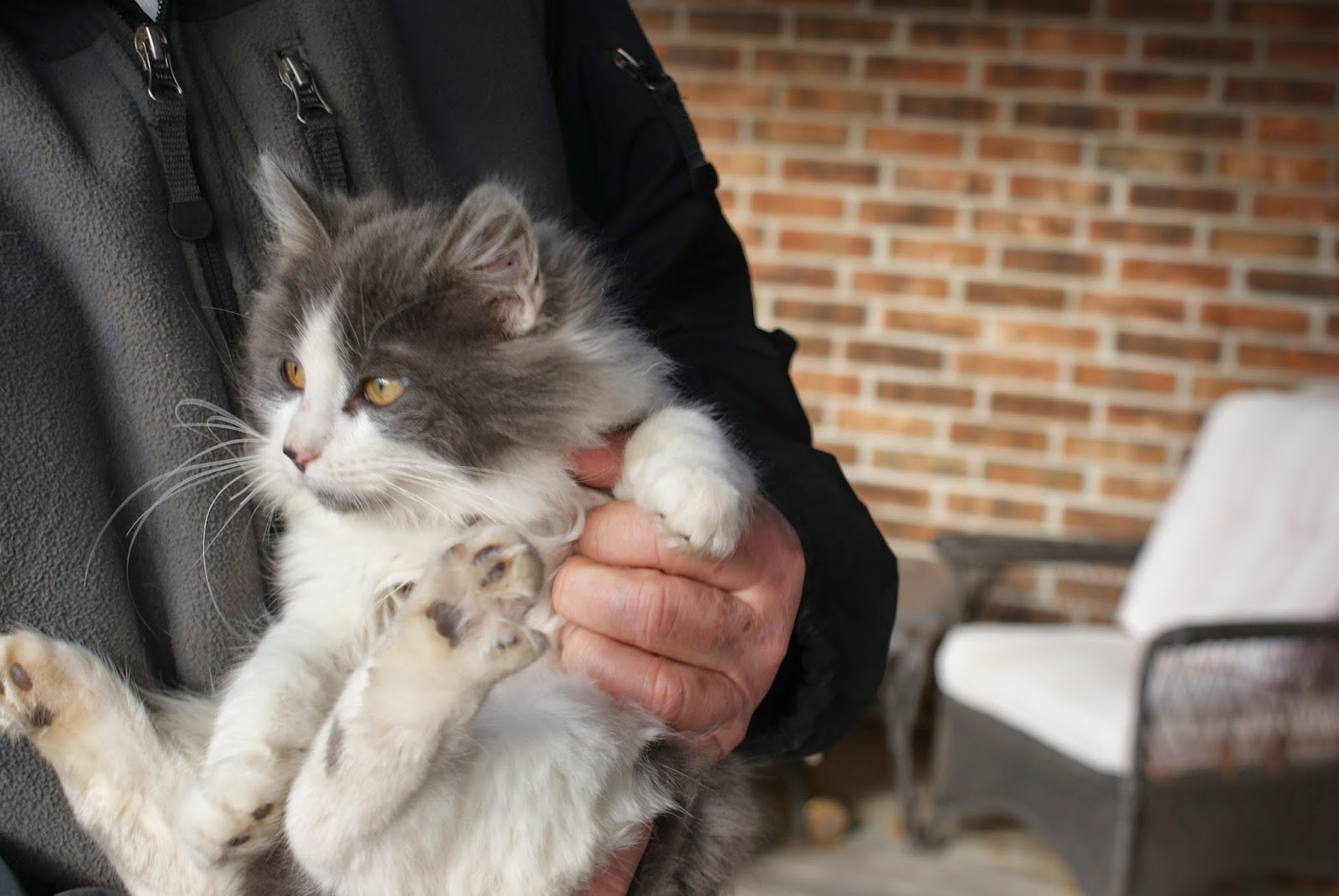 Then we took him to the Humane Society. The lady was very nice but told us they are filled up and have more cats than they do cages to hold them. We explained that we have ten dogs and we can't keep him, so she said to bring him back on Friday morning and she'll make room. She gave us some kitten food and said he's so pretty that he should be adopted quickly. 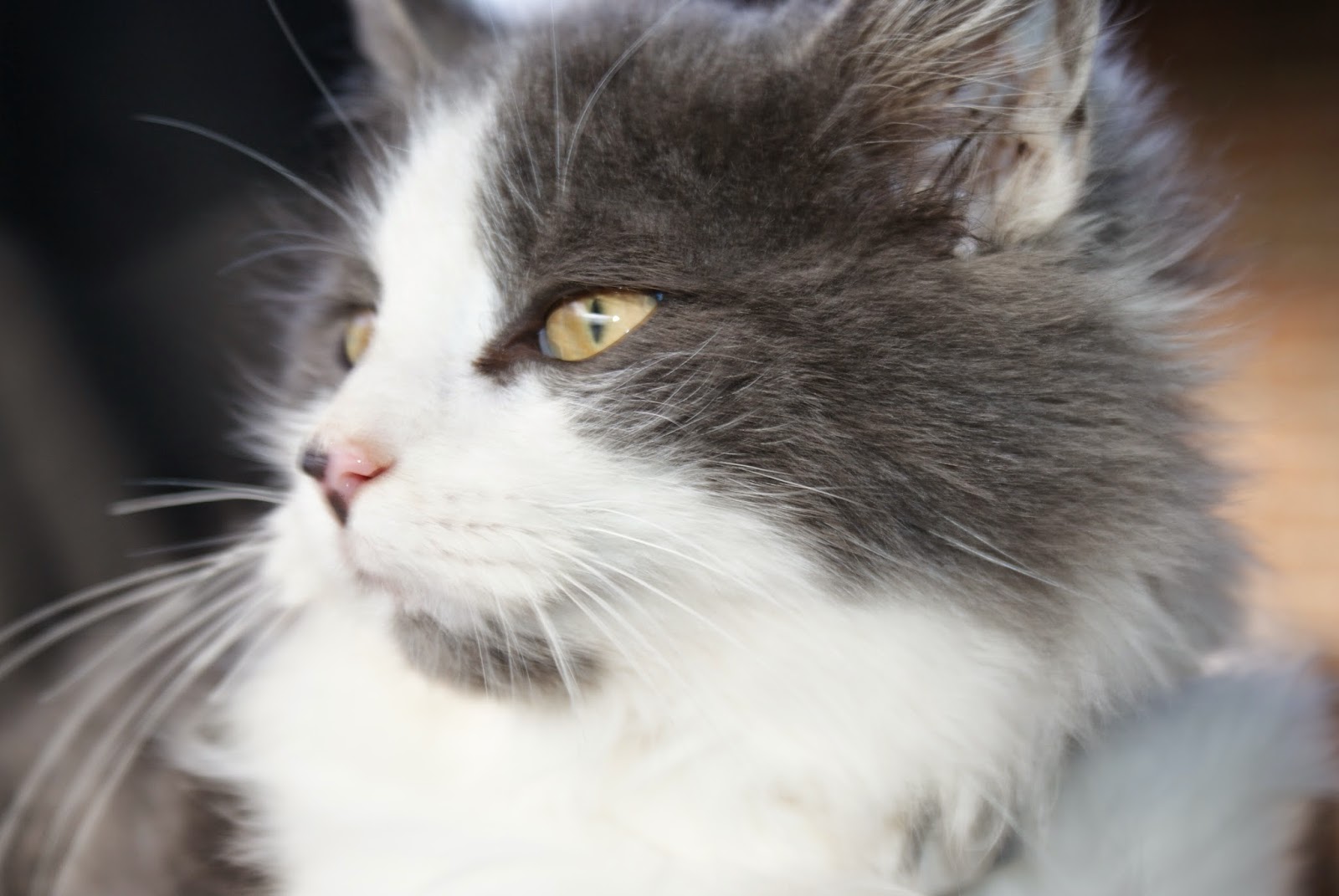 When we got home, we went to work. Rob set up the crate that Mackey no longer uses. We put it in the garage behind the dog barrier so they can't see him. 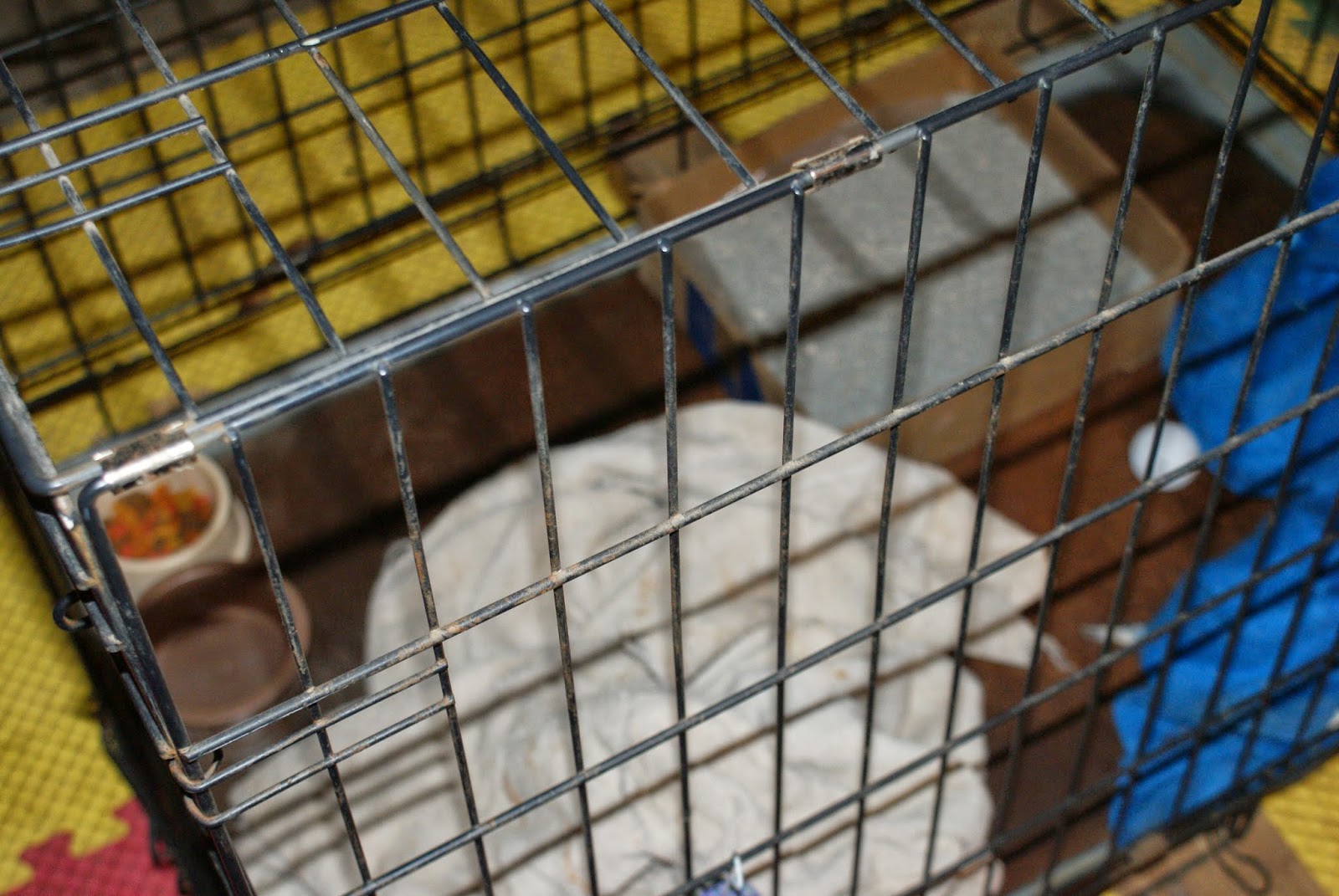 We gave him a litter box and some food and water. I even found a couple of plastic balls with bells inside for him to play with. He has a blanket to curl up in and seems fairly content. He'd much rather be sitting on my lap, but for the next couple days, he has a safe home out of the cold. 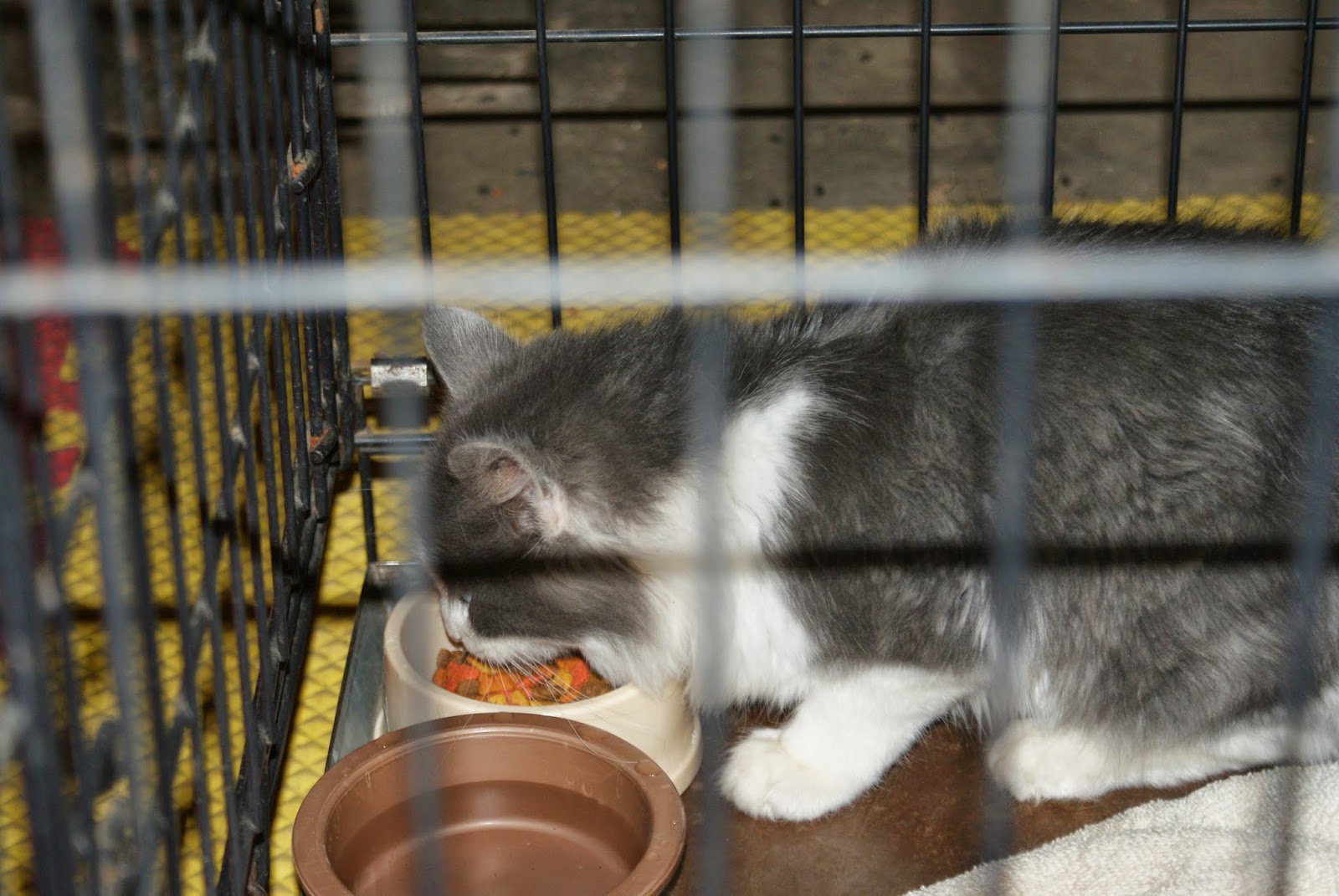 What is wrong with people to throw away a baby like this on a freezing night. If you don't want a cat, don't get one. If you don't want kittens, get your cat spayed. If you have a cat you don't want for some reason, find it a home where it'll be loved or get a shelter to help you. The same goes for dogs and whatever else. I just don't get people who don't value these little lives.

By the way, I call him Stormy because his coat is the color of a storm cloud and no he's not staying.
Posted by Sue at 2:48 PM

We tried to vote, but it wouldn't let us. We'll try later.

Just a couple of ideas--did the vet scan for a chip? While it isn't as common to microchip a cat it DOES happen. Also there is a public page called Leighs Lost and Found on facebook where you can post his picture/info. They have fabulous results on there with reuniting or re homing. If you aren't on facebook you can contact Leigh Moody (from KSPR) If you want her email let me know and I'll send it privately (I think you have my email...). I've listed a couple of found dogs on there.

Anyway, just an idea, he is gorgeous and looks very well cared for to be a dumpee. Is there a way to get the word out around the neighborhood? Kittens are terribly curious and can end up easily lost.

Thank you for taking the little guy in. Hope things go smooth for you!

Bless you for helping out Stormy, Miss Sue. Some hoomans can be so cruel and it makes us sad.

Stormy IS extremely handsome. Thanks for giving him a warm, safe spot for a couple of days!

Oh he IS beautiful, but what is wrong with people!? Poor baby. Thank you for fostering him for a couple of days, especially as I know it is a tremendous inconvenience.

Gosh, it's been ages since mama has broken out the yaptop so we can check up on some of our dear blog friends. First, we're happy to see Miss Morgan is so much better. Second, we're so very sorry to see that Elwood has flown over the Bridge. We've never had a pet bird, but Elwood was most handsome in the photo and we're sure he's greatly missed. Hope all the pups are healthy now. And finally, another star in your mom's crown for taking in Stormy. We sure hope he finds a loving forever home with good kitteh people. We couldn't have a kitteh, either, due to Abby's prey drive.

We lost a kitteh cousin in mid-November. She lived with mama for a while before we came, when mama had Danes. Then she went to live with Cousin Pretty Girl, who does not have a prey drive at all that we can see.

We're doing ok. Jed had a malignant growth removed from his bum a couple of months ago. He was looking good at his last checkup on Tuesday, so paws crossed it stays away. Mama continues to deteriorate, with both hands now on the DL [disabled list], so she knows how frustrating it is for your mom to have a sub-optimal paw. But we're all still here, and that's something.

In case we don't get back, you guys have a wonderful, healthy Christmas!

Love to go and vote and won't have to fib either.
Thanks guys, thanks for caring, thanks for sharing. Thanks for bringing in puss from the cold. I WOULD HAVE LOVED TO HAVE THAT KITTEN (even though mum said no more cats after Frankie de tabby).

Good luck Fudge! You're a winner in my book.
Thank you for helping that sweet kitty; it makes me furious that people are so irresponsible and cruel. The fact that he is flea-ridden does point to a neglect/abandonment problem. Grrr.I was just speaking with a vet tech for the local shelter & she said this year, due to the lengthy mildness of spring-summer-fall, there was time for cats to have 3 litters instead of the usual 2, so shelters are over-run everywhere. :(

I wish I could have Stormy. He is so pretty. But shipping animals is very cruel, too, in my opinion.

Good luck to Fudge! Subaru would be lucky to have such an articulate and accomplished spokesdog!

Poor baby! So glad you were able to save Stormy!

Are you sure he was thrown away, and isn't lost with a family searching for him?
Poor thing... but so glad he wound up at your house!