Hi Everybody,
The other day we read some funny questions and answers on Mitch and Molly's blog . They made us smile and I thought I'd like to give our answers. I hope we don't shock you. Here goes. 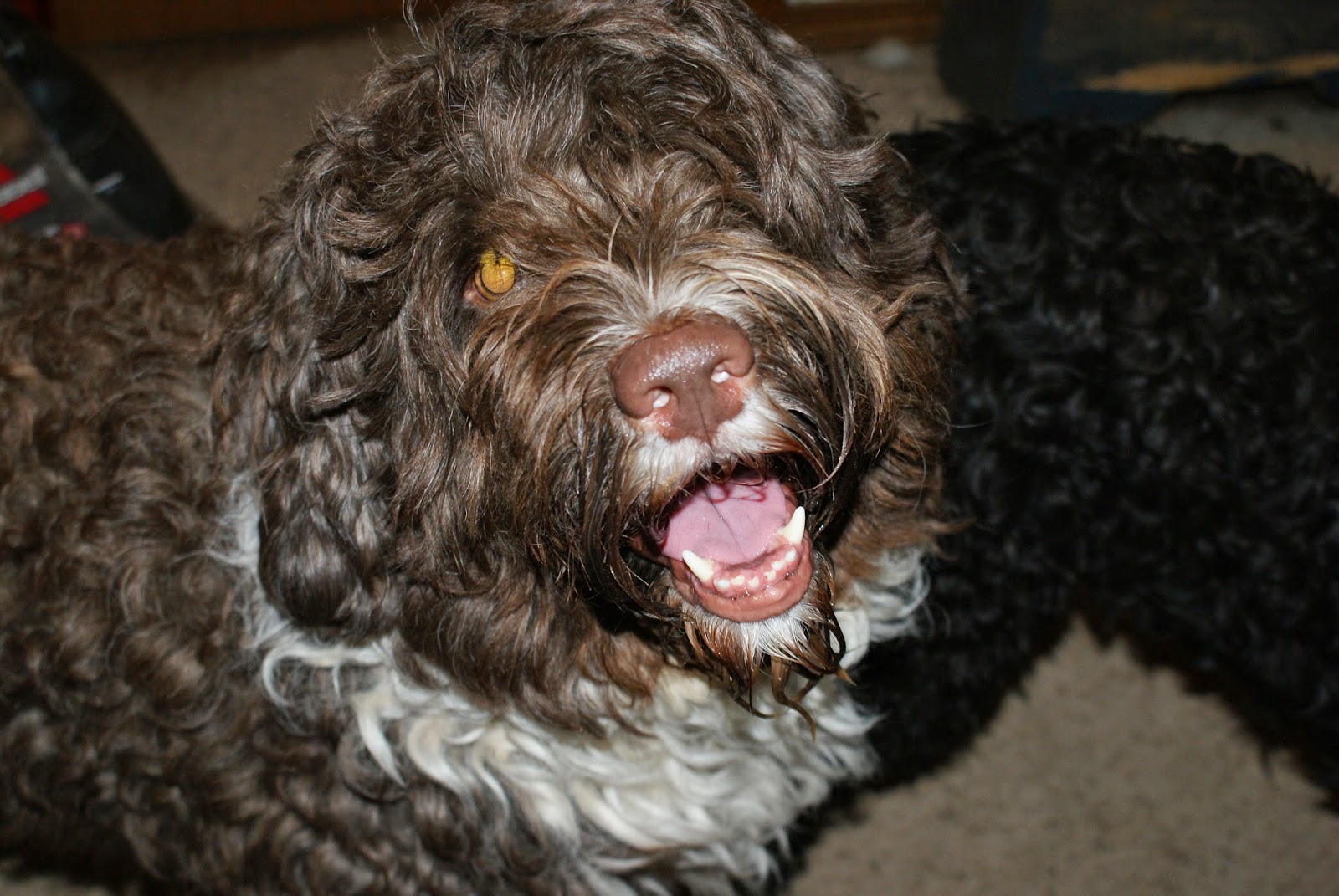 1. Do you do anything that really annoys your peeps and what is it that you do?
Oh, where do I begin? I jump really high to greet Mom and I spin really fast when we get to the door. She can't even get past me and has to hold out her hand to stop me. The thing she hates most is that I step on her all the time. If she's sitting on the couch or lying down in bed I want to be close to her. She doesn't mind that but I always step on her while I'm getting in position. She says I go out of my way to step on her and maybe I do because I love her. 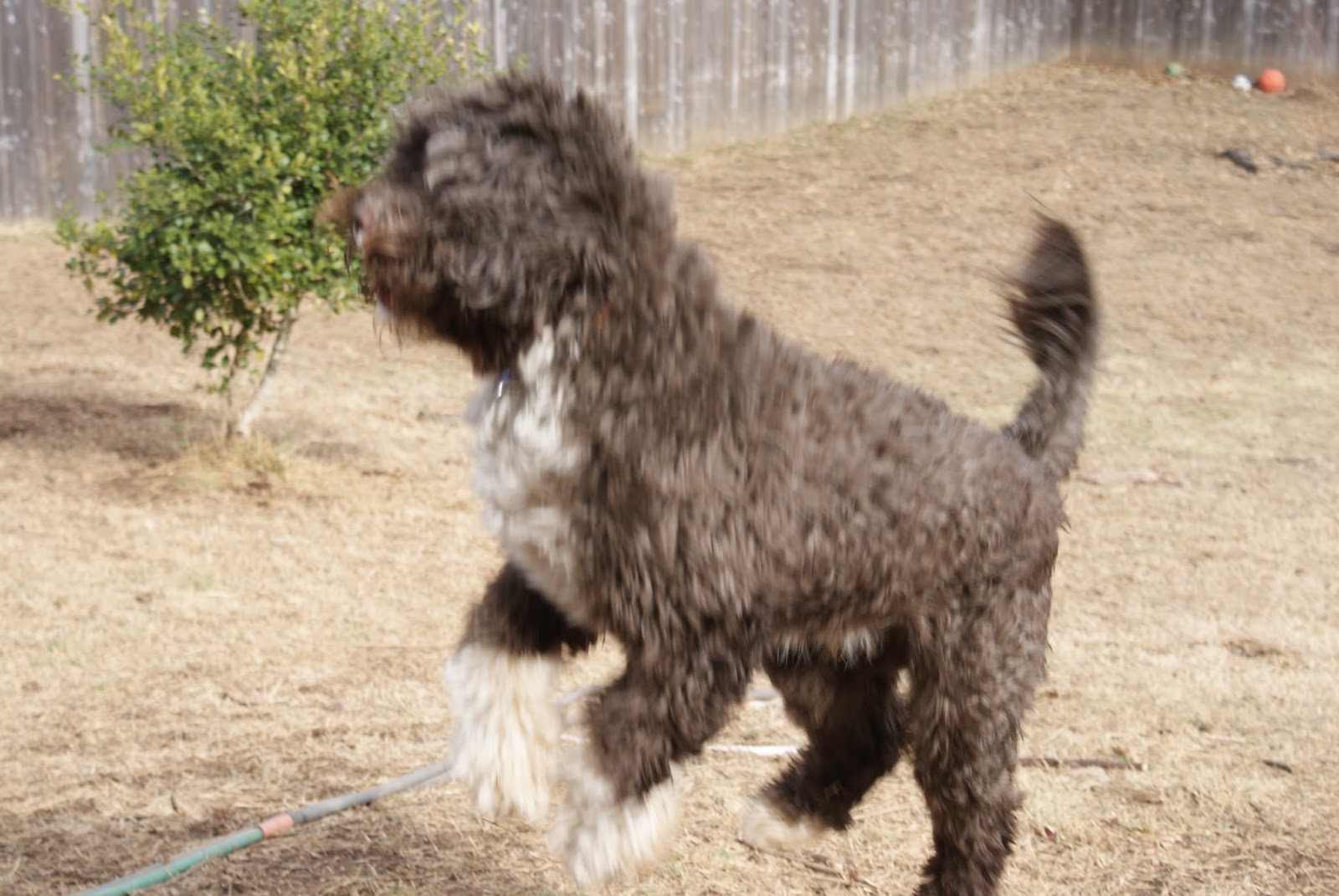 Noah annoys her because he barks at imaginary noises. He thinks he hears things outside and runs to the door barking. Then we all have to follow him and bark too because maybe he did hear something. Mom hates all the noise and tells us to stop, then it starts over again. 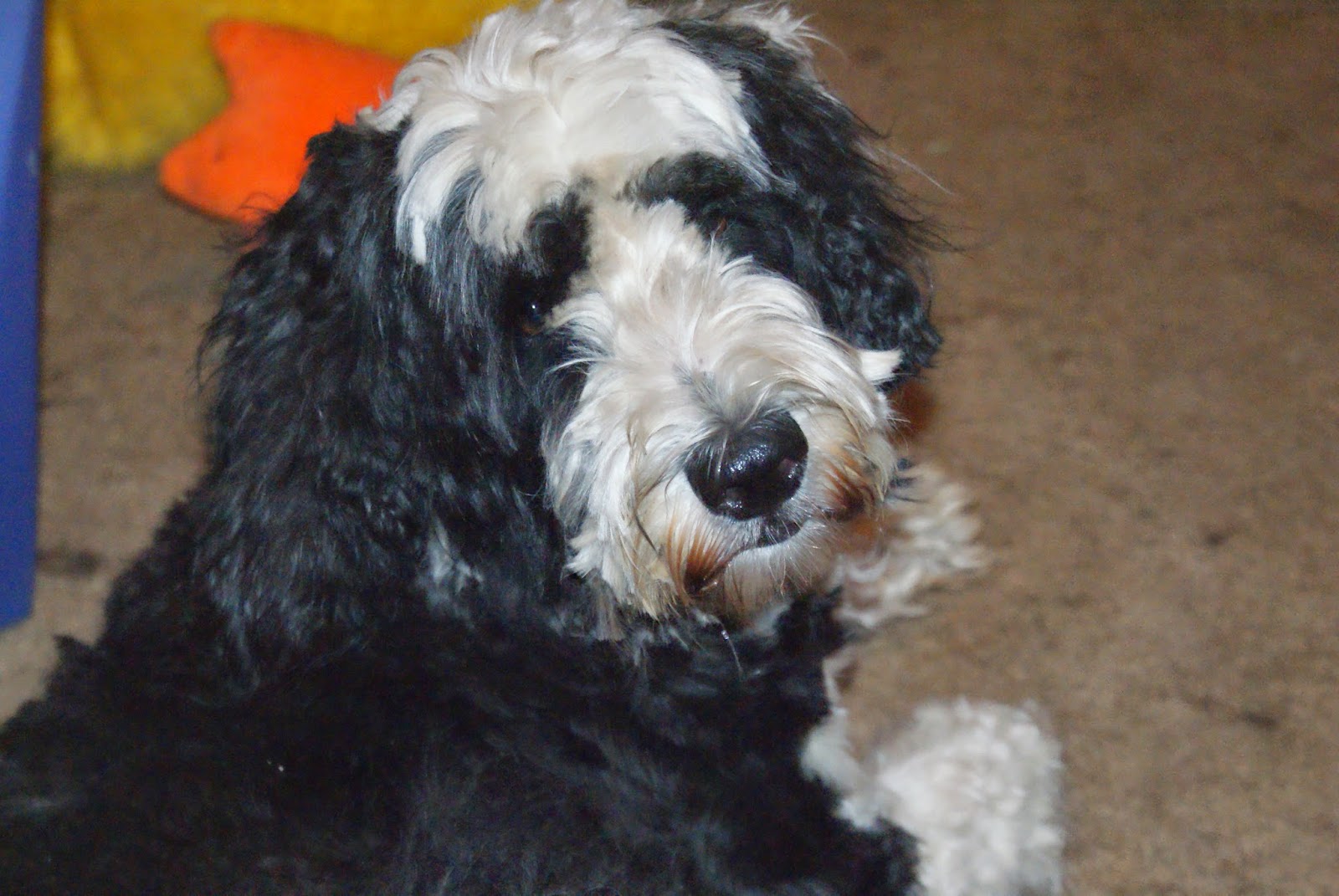 Noah and the girls are all counter surfers, too. Usually they just look because Mom puts stuff where they can't reach it, but once in a while they get something good.

2. Have you ever escaped from your yard and if so where did you go?
I've never escaped because I like to stay near my Mom. One day Norma Jean and Lola got out and started walking up the street. Mom saw them from the kitchen window and ran out and called them. They came right to her. Noah and Sebastian got out once. Noah came when Mom called but Sebastian took off running. Dad got in the car and drove up the street. He opened the door and Sebastian jumped right in. He loves to ride. 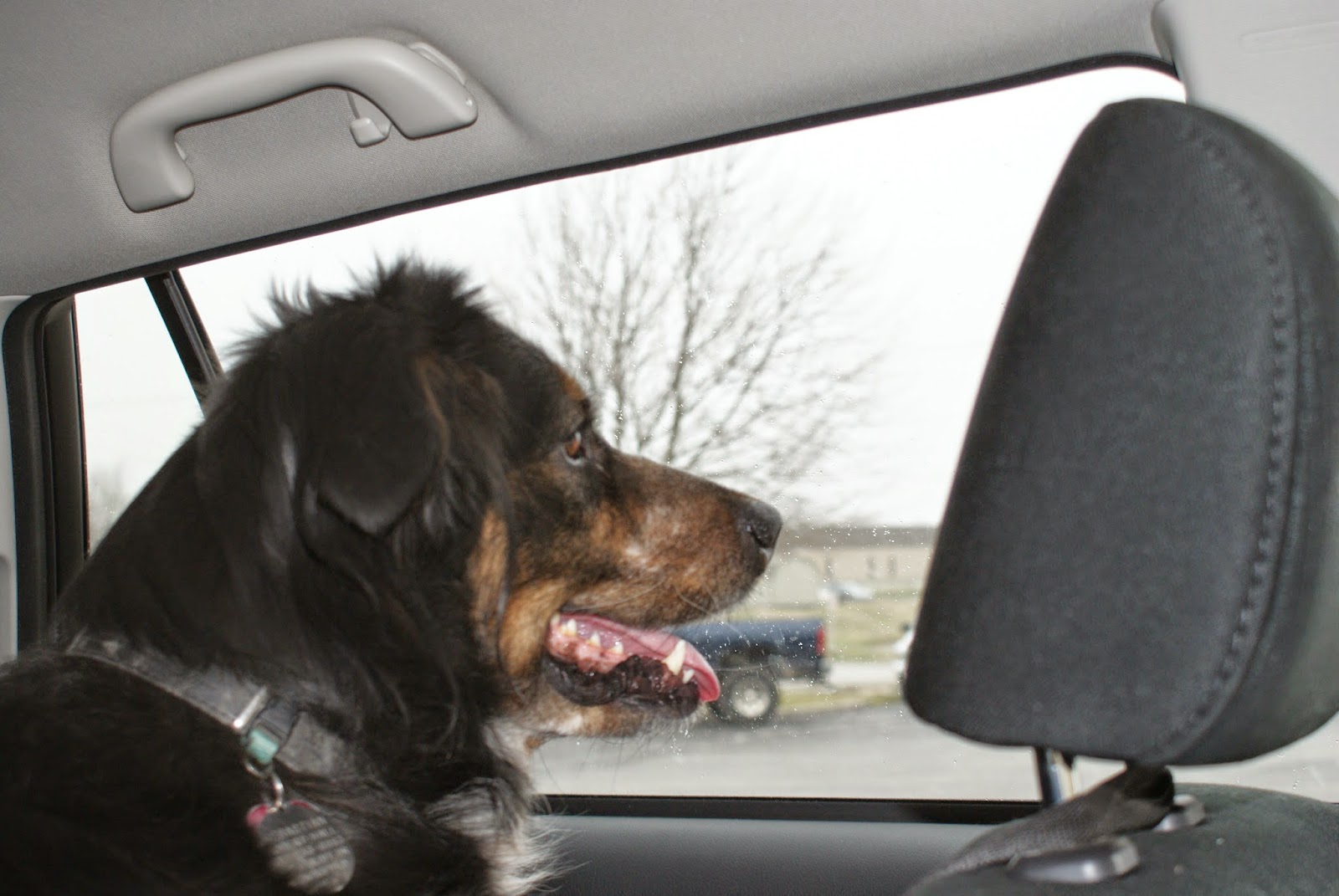 3. Have you ever caught a critter and what did you do with it if you did? Did you eat it?
The girls are the critter catchers. Bailey caught a squirrel one day and brought it to Mom. It wasn't hurt and Mom just let it go over the fence. Tess caught a squirrel and Mom told her to leave it. She did and Dad tossed that one over the fence too. Not long ago they caught a mole and the girls all passed it around. They didn't eat it, just chewed it up a little. Mom was disgusted and made Dad go take it from them. They dropped it for some cookies.

4. What's your very favorite food in the whole world and are you allowed to eat it?
I love cookies or cupcakes with sprinkles. Really I just love sprinkles. Morgan loves bacon more than anything. The Portie girls all really like sardine fish. Mom hates them because they stink and look like little dead fishies but she gives them to us anyway. We also like Natto which is stinky and slimy. 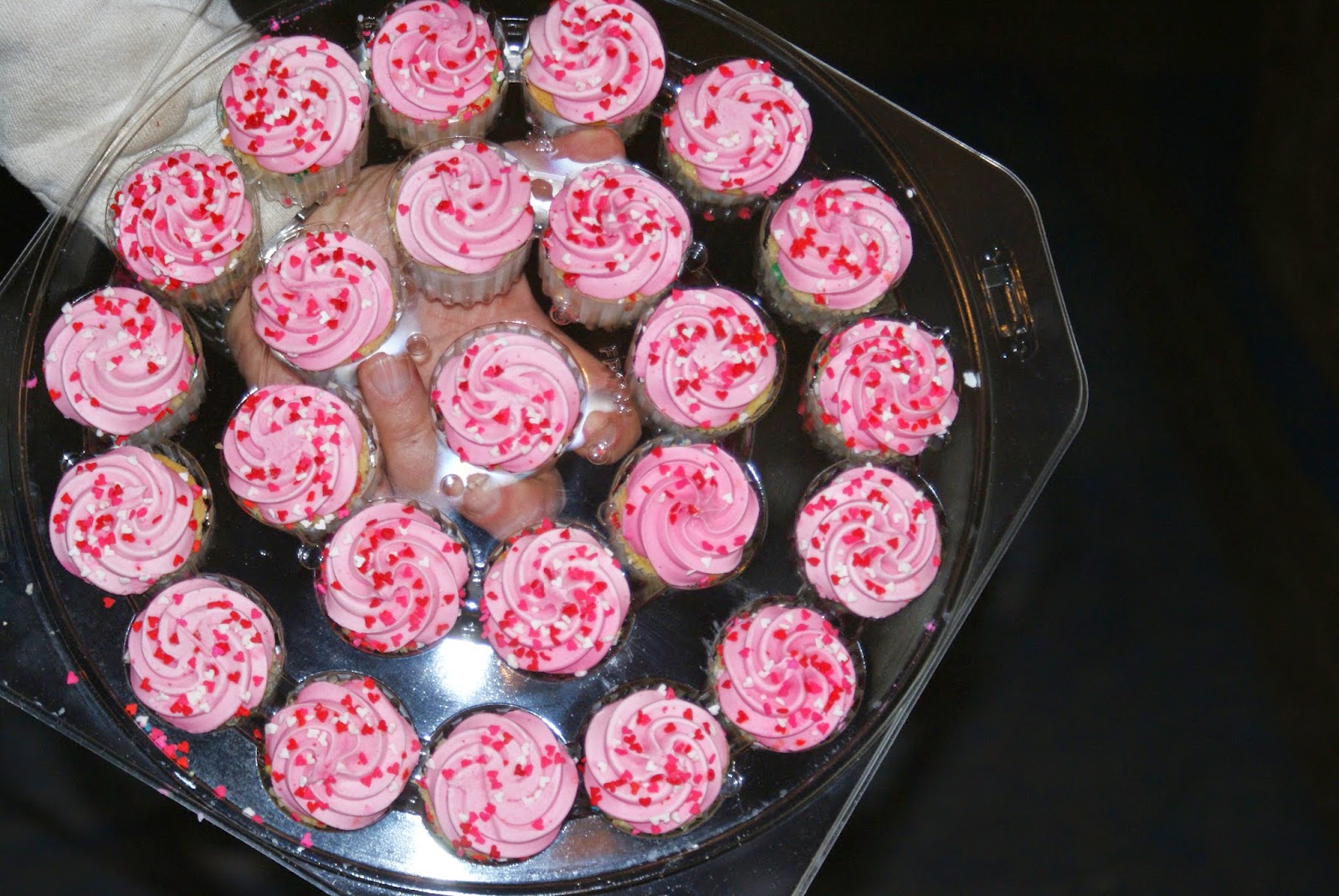 5. If you're a boy, do you cock your leg when you pee or do you squat like a girl? Same for you girls... do you cock your leg?
I started lifting my leg when I was just a little pup and so did Noah. Sebastian usually lifts but sometimes he gets lazy and just stretches out. They girls all squat except Baily. She balances on her front legs and lifts her back legs off the ground. It's a pretty neat move that she learned from Samba. It isn't easy to do, you have to have really good balance. 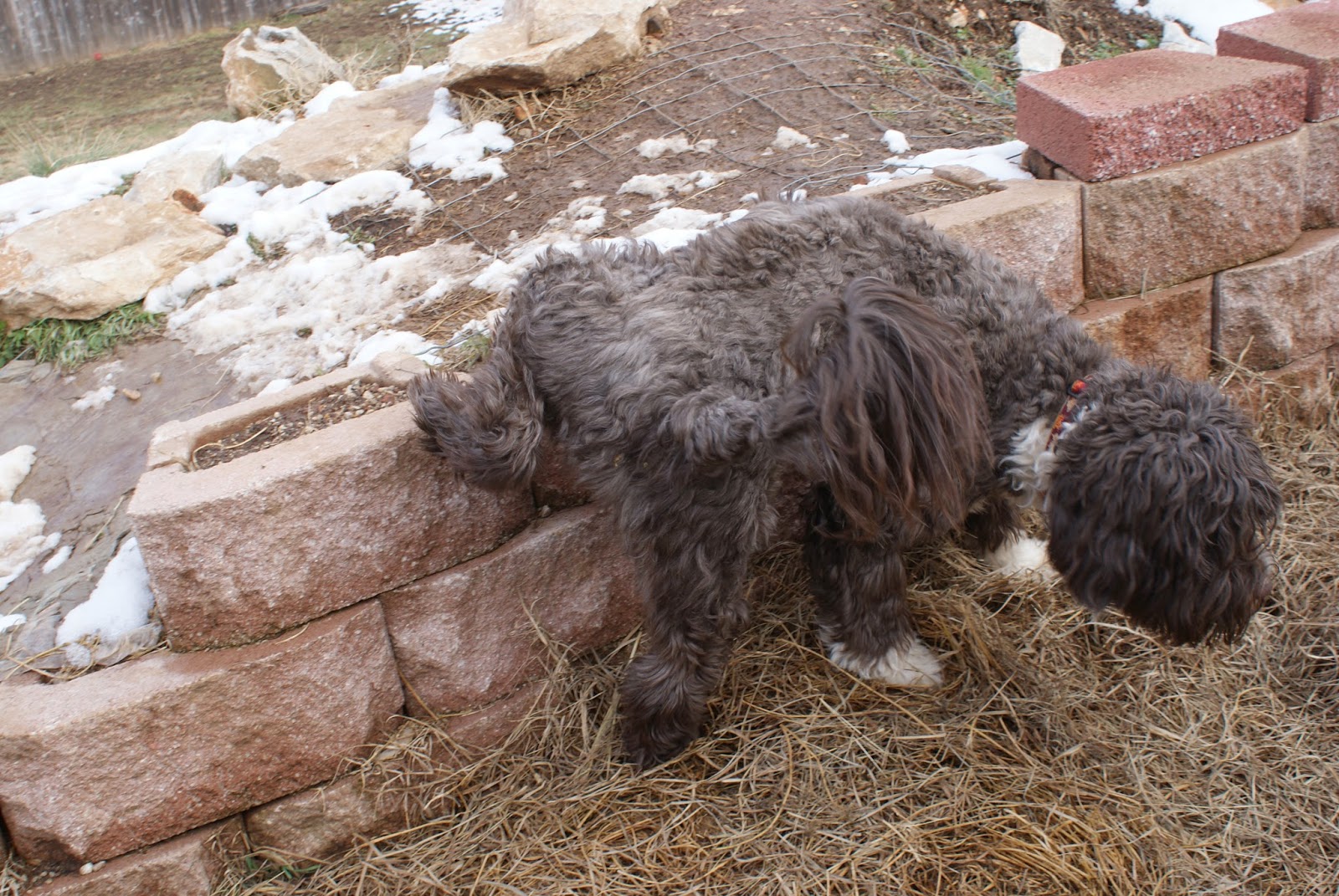 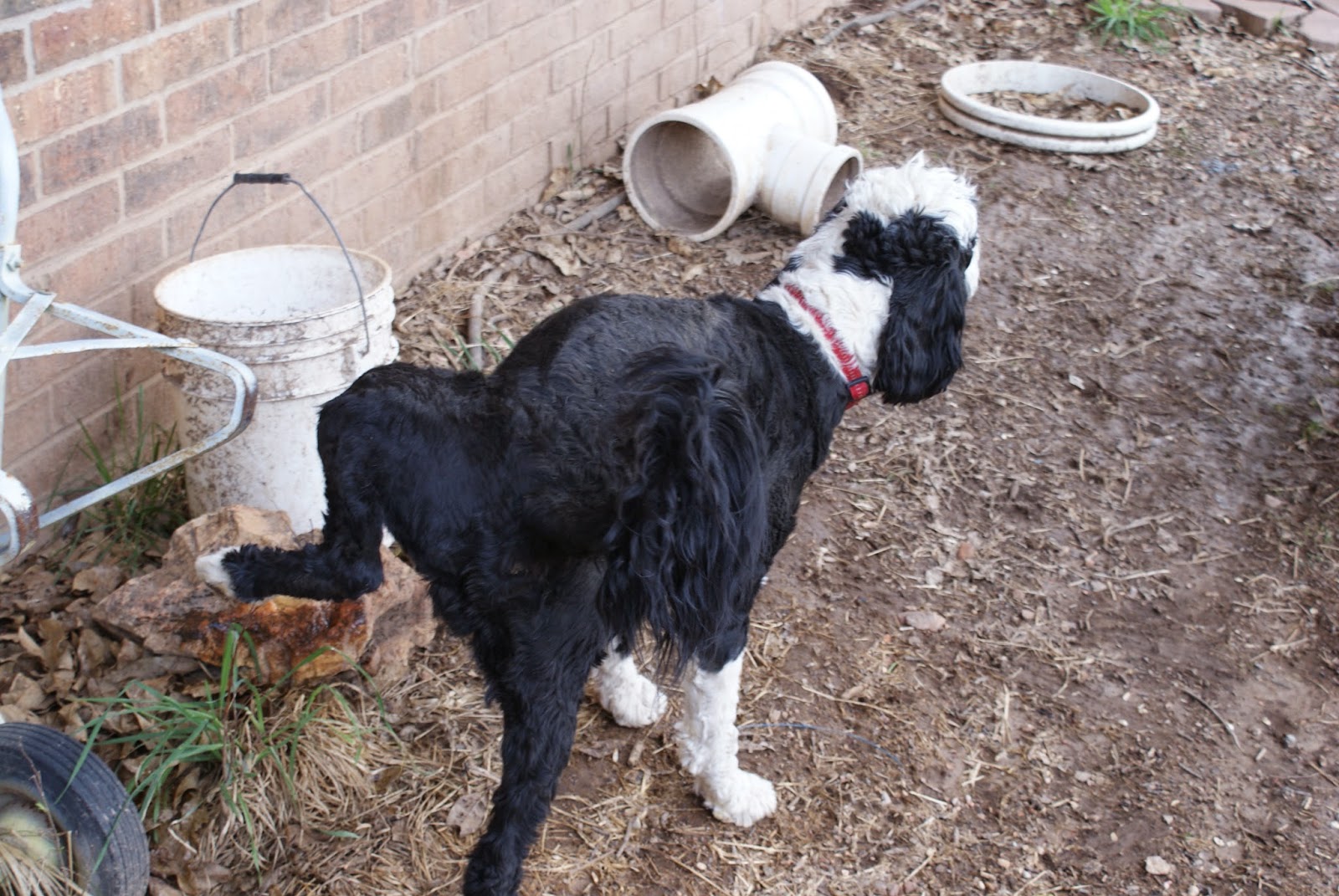 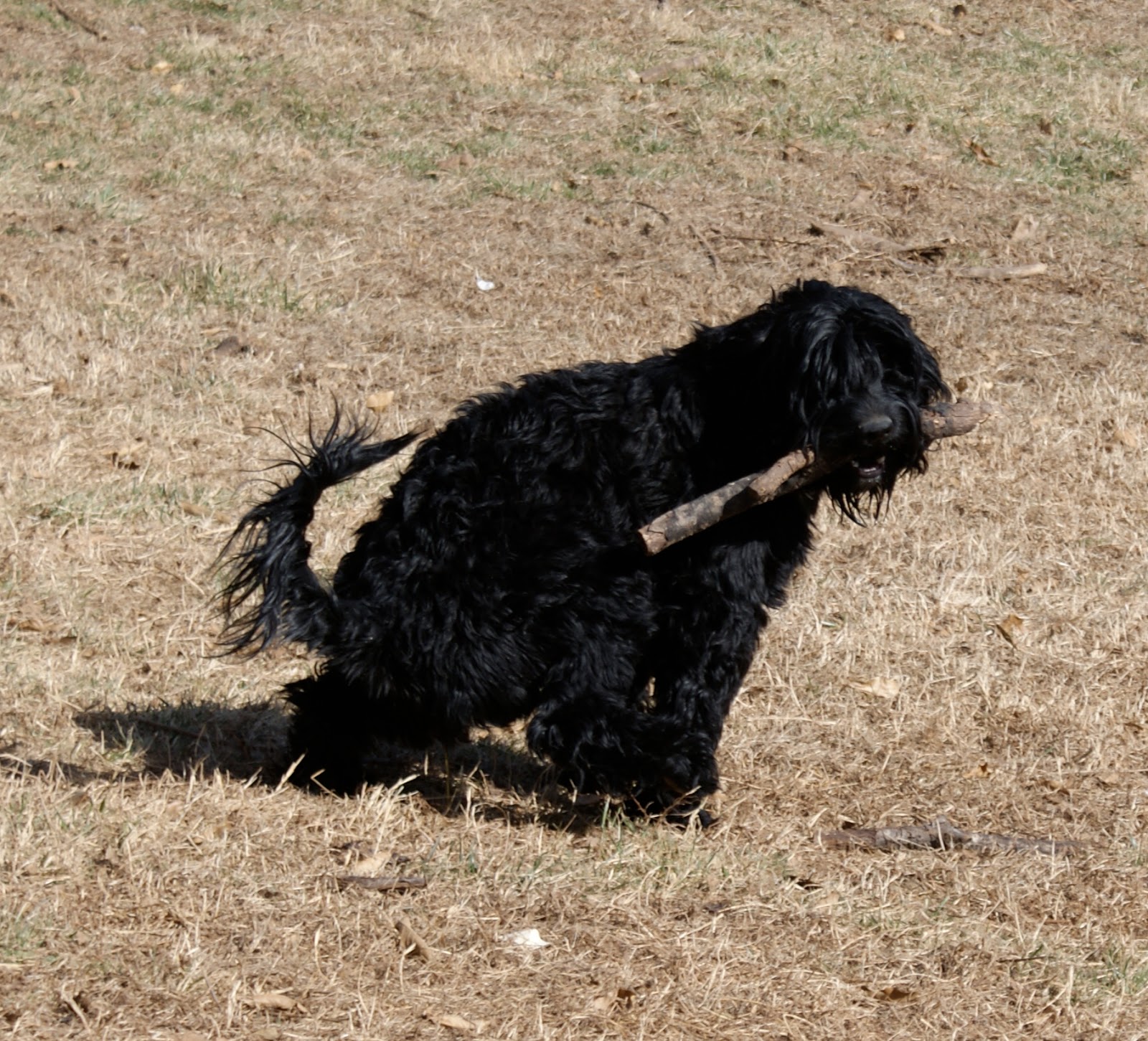 6 . Do you drink out of the big white bowl in the bathroom?
Morgan used to but now the lids are kept down because we Porties like to play in the water. We stand on our back legs and splash the water with our front feet. Mom say we make a mess. I also like to try to pee into the water but it's tough to reach that high.  Mom keeps the doors closed too because Morgan likes to play with the paper on the roll.

7. Have you ever had a go at flyball, agility, lure coursing etc etc and how good at it  were you?
We do Rally Obedience. It's lots of fun and I even competed and got ribbons and a title. Mom does it with some of the others for fun but they haven't competed yet. 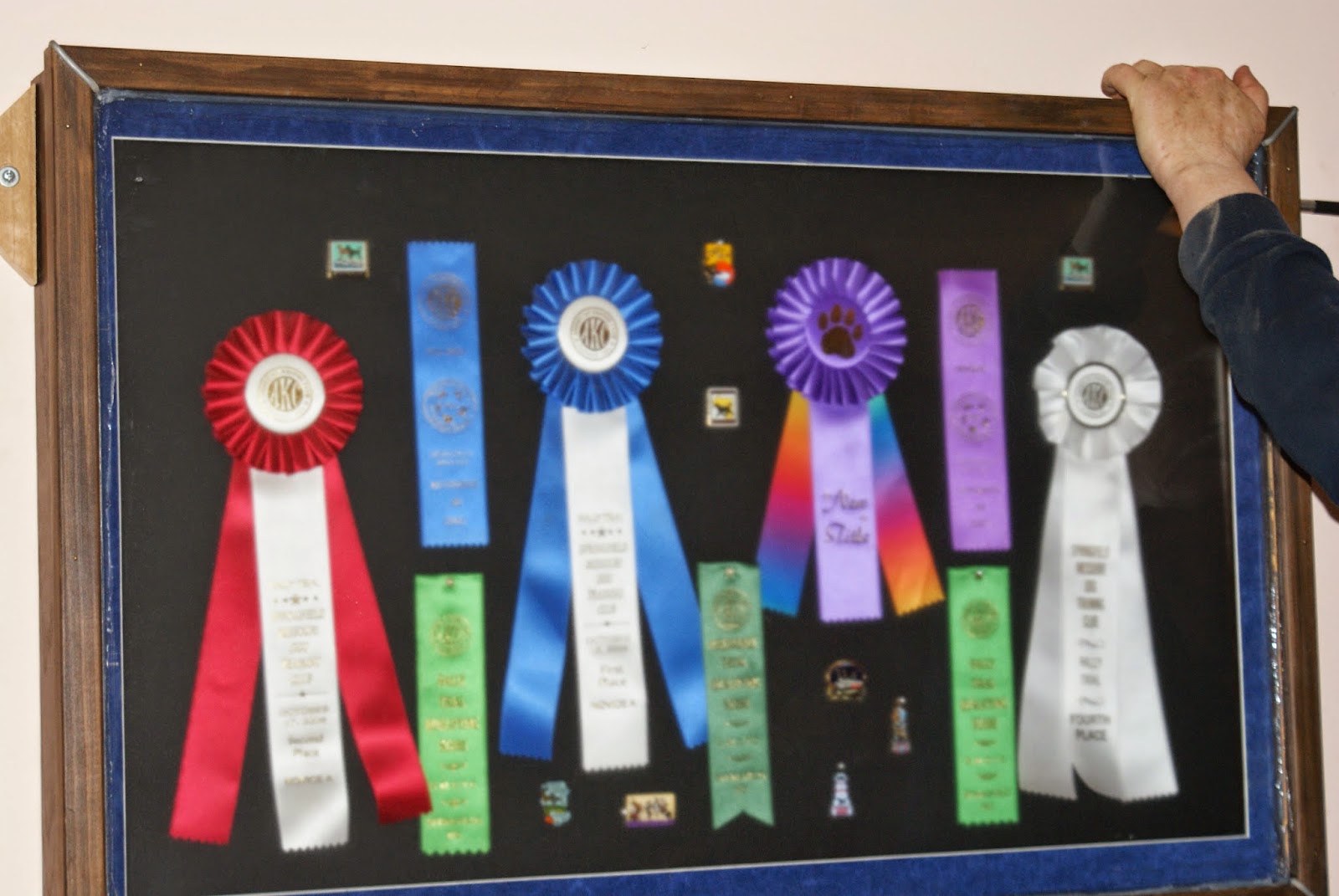 8. Have you ever competed at Westminster, Crufts or the equivalent, or even dreamt about being at Westminster, etc?
Mom had dreams about going to Westminster but it didn't work out. She says I could have gone but I don't behave very well in the show ring. I like to jump and spin and  try to make everyone laugh. Mom says the judges don't like that but I am who I am. We don't do the shows anymore. 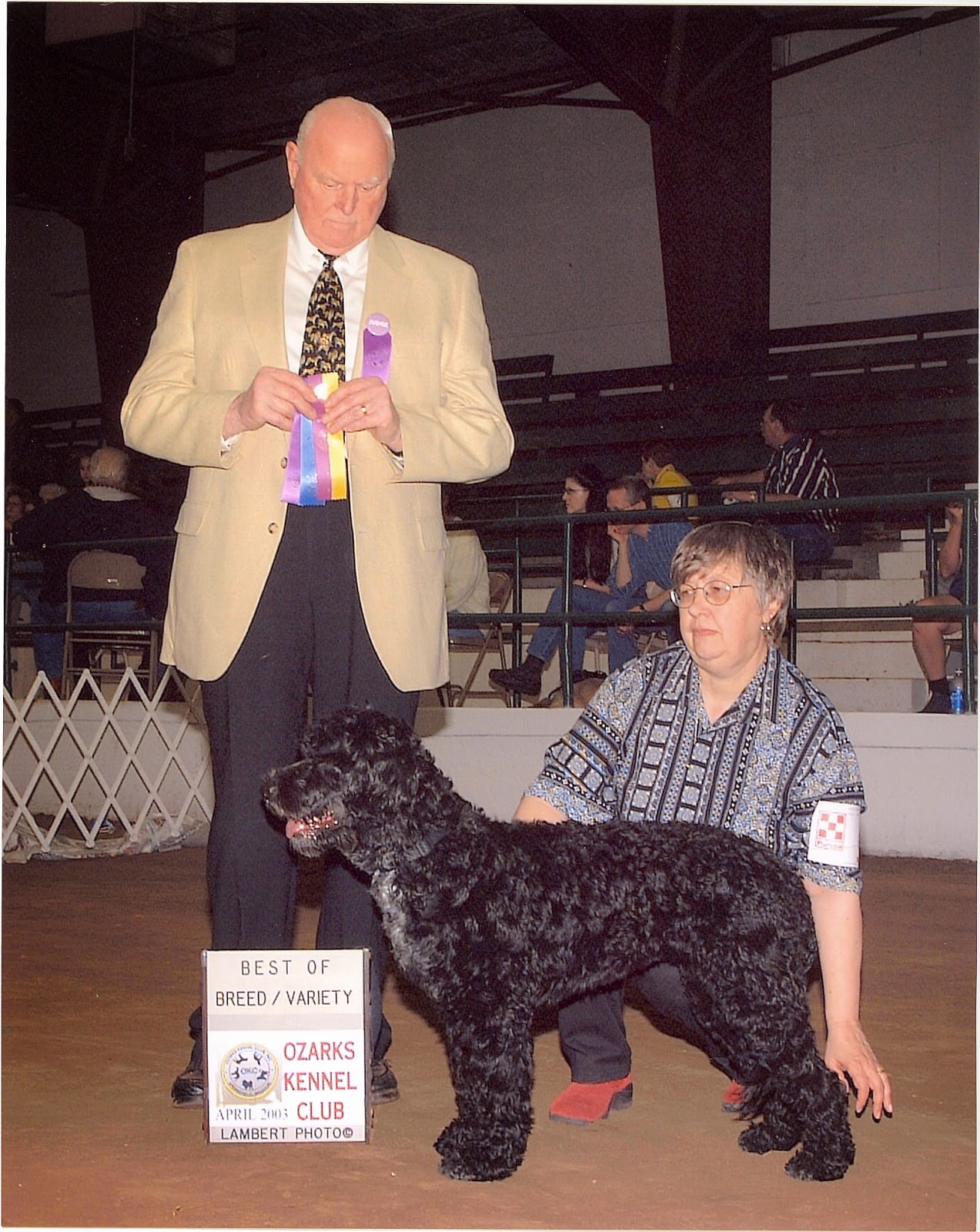 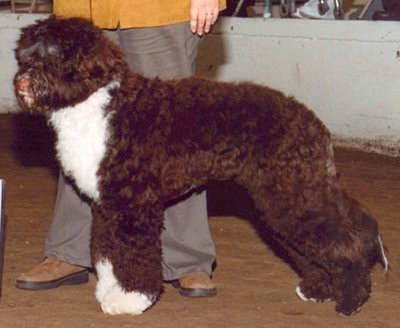 9. Have your Mom and dad ever left you behind while they went away for a holiday? Where did they leave you and how did you greet them when they returned?
No, they don't leave us. A few time some friends have come by to take us out when Mom and Dad had to be somewhere but there are ten of us, so it's hard to leave us.  Beside I don't want my Mom to leave me with anyone else.

10. Is there any peep or other of your own kind that you really hate and why?
No, I like everybody. I'm not crazy about Noah, but he is my son, so I'm stuck with him. We Porties all get along well with most everybody. Mackey is shy and doesn't like to be close to strangers. Sebastian is a really friendly guy except for one dog that he saw at the vet's office one day. He didn't like that dog as soon as he saw him. We think it maybe looked like the dog that hurt him when he was little. Sydney only likes Mom and Dad. She doesn't get along with anybody else, peep or pup. Dr B says she's emotionally challenged, Mom says she's crazy.

11. Do you get raw meaty bones to eat and if so what kind of bones are your very favorite?
None of us ever get bones. Tsar and Sky both broke a tooth and had to have very expensive root canals so Mom says no bones, antlers or hooves. We don't get to chew hard stuff. 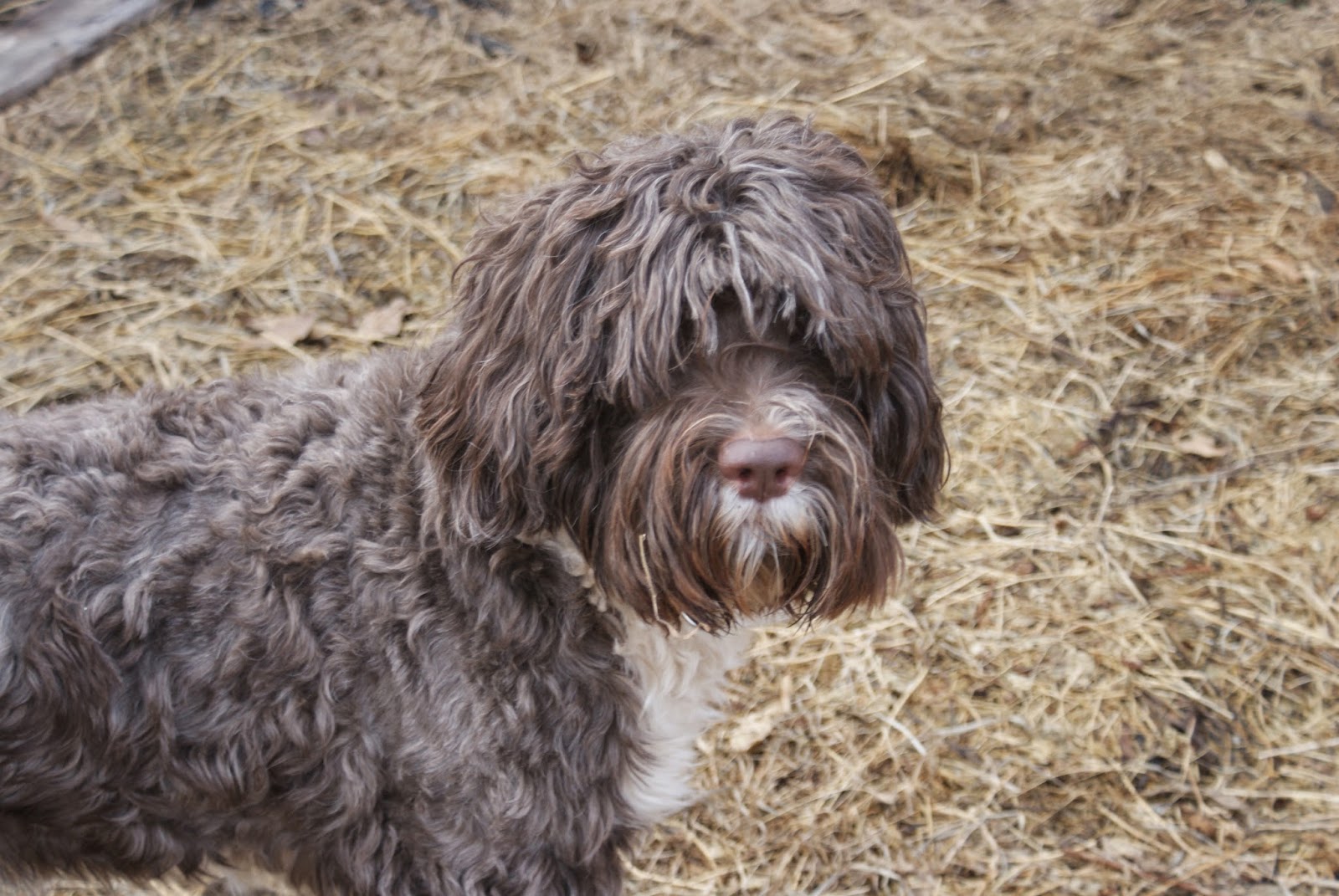 So now you know lots of stuff about us. We'd love to see how you answer those questions.
Your pal, Fudge
Posted by Sue at 2:40 PM

We love getting to know more about our friends. Great job, guys. Now what is Natto? We need to try some of this once we find out what it is!

Fudge! That was awesome! We'd love to see a video of you jumping and spinning. Oh, and you were a very handsome show doggie :-)

That was wonderful. We love hearing all about you guys. Posts often gloss over all our traits...the good and bad.

Well, that was a lot of information! You looked very dapper in the ring, Fudge, but I can see those stuffy old judges not appreciating the spinning routine.

We went to a wedding once, and everyone left Thor alone for 12 hours. He was so sad that he went to sit beside the guinea pig cage for companionship. We were frightened when we came home because he was not near the back porch and mud room, where we left him; the kitchen door had been pushed open and we couldn't find Thor - until he came galloping in from the playroom!

Thanks Fudge....that was very interesting to learn about you guys!

It is wonderful to learn more about you. Sadly our answer to most of these questions would be no. My gosh we live boring lives

Thank you. It's really very nice to learn some things about your pack.

HA HA - thanks for the laugh Fudge! :) We esp laughed at #6 and think your Mom needs to take video of the splashing... we think that one might even win Mom some cold hard cash on America's Funniest Videos. :)