Ok, you knew it was coming, right? Yesterday morning I checked Lola's toe and it was still swollen and red and it was oozing. Swollen and red I can handle but oozing means infection, so off we went to the clinic.

It was Dr B's day off so we saw Dr M. She's a very nice lady who the dogs all seem to like. First she shaved the toe and cleaned it. Then she took a good long look at it. Her first question scared me. She asked if we had any snakes in the yard. We do have a black snake living in the rocks but they aren't venomous and I haven't seen it this year.

The toe didn't really give us many answers. It could be a bite, either a snake or a spider, or it could be  foreign matter that worked it's way into the toe. We do have foxtails but they usually come out later in the summer. We'll treat all those options pretty much the same way. 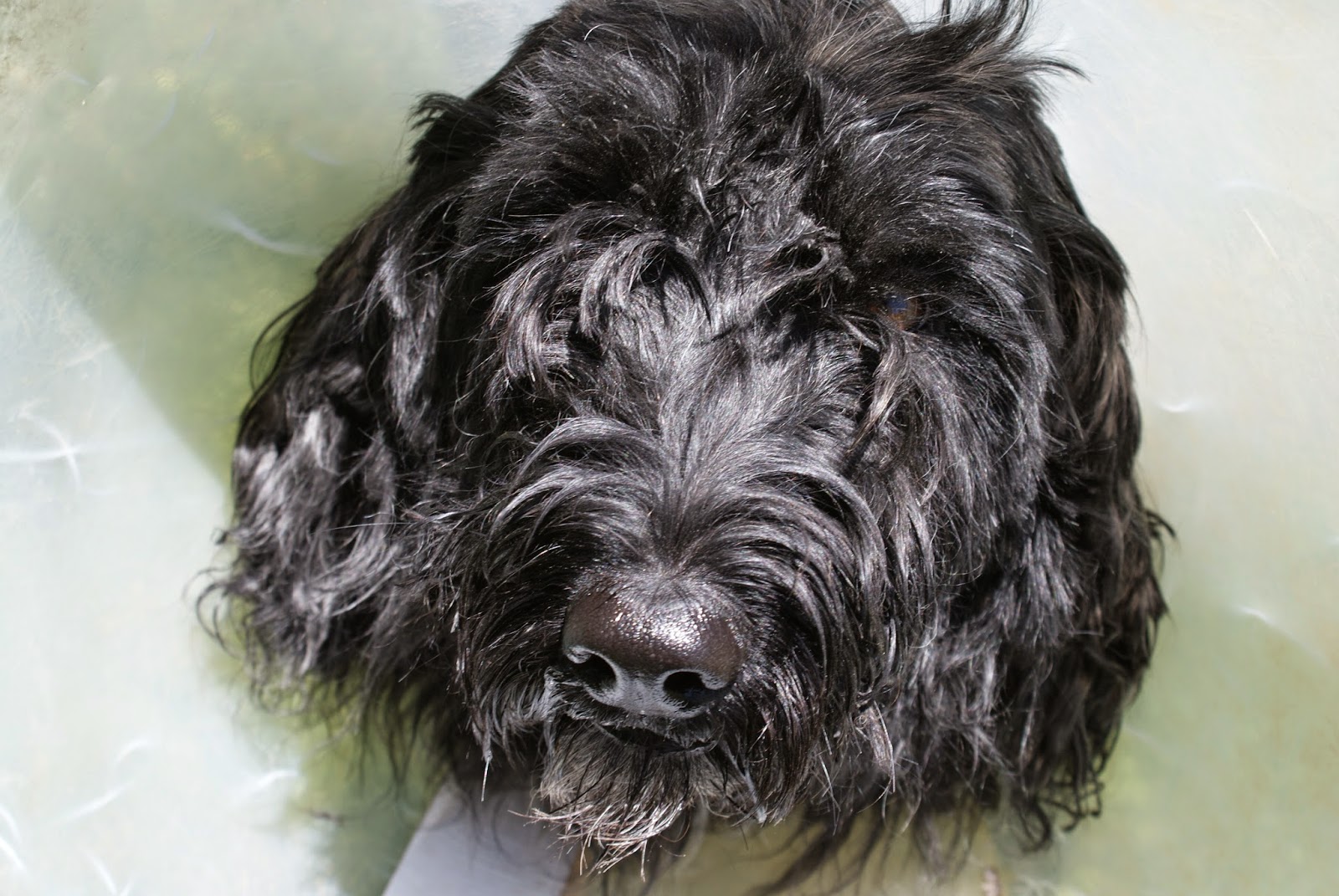 Lola is getting an antibiotic and an anti-inflammatory. Once a day we soak her foot in Povidone solution and warm water. Twice a day I clean the toe with some medicated gauze that the doctor made up for us. Lola is wearing a cone so she doesn't try to fix it herself.

This morning after her breakfast I gave her the meds. Then after an outing I soaked the foot and cleaned it. The swelling is down quite a bit and though last night the ooze was thick and yellowish, this morning I don't see any ooze at all. There is a little bleeding though. I think I see two cuts or scrapes on the toe, one large near the top and a smaller one near the nail. She may have done those herself by chewing when it first happened. She's putting full weight on the foot and I think after a couple more days on the antibiotic, she'll be good as new.

Dr B popped in just as we were finishing yesterday and got the story from Dr M. He laughed and said that Lola does about fifty miles around the yard before noon, so toe problems are to be expected. I'll be checking back with him on Monday to give him an update on her condition.

We hope your toe is all better soon, Lola!

We reckoned there was a Vet visit looming. Hope it continues healing. Now, Nola, that's it for this year. No more ouchies....ya hear?

Whew....another problem...but sounds like you got this one handled!

Poor Lola, POTP on its way, we hope all the treatments and meds clear things up.

I remember when our girl Annie had the same problem, and did the same things you're doing. It does go away pretty quickly, and like you, we never figured out what caused it.

There's always something. You have a great group of vets to help when the pack comes up with something new for you! Cute picture; who'd think that face would chew her own toe?