We've had a lot of emotion over the last couple weeks. Miss Morgan wasn't doing too well a couple weeks ago and I told Rob I thought it was time. He called the vet and made an appointment for the next morning. I cried for the rest of the day and when we went to bed that night I told Rob that I couldn't do it. I felt she was still in there and wasn't ready to go.

I called to cancel the appointment the next morning and Dr B called me back a short time later. We discussed her condition and he reminded me to not decide on a bad day but to watch the trend. She followed me around the house like a puppy all day and I was so glad that I had changed my mind.

Then last Sunday when Morgan got up in the morning we saw blood all over her bed. Rob threw it n the wash while I took her outside and examined her. There was blood on her belly and I knew she'd been licking herself the night before. Morgan has always been OCD so I assumed she had licked too much and damaged the skin. Then I noticed that her left rear leg was swollen almost twice the size of the other leg. She didn't want to eat and I knew there was some infection somewhere. 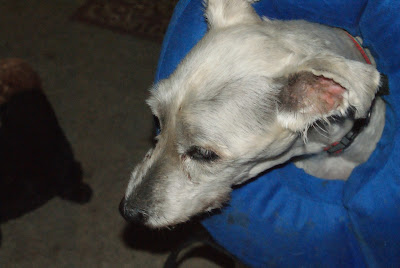 Monday we took her to visit Dr B. She was running a fever and he agreed there was an infection but he said it wasn't from licking herself. She had two little but deep holes in her groin. He said they were drain holes and the infection was inside, perhaps from some foreign matter, or a tumor that ruptured. He put her on a strong antibiotic and instructed me to put warm compresses on the drains to keep them open.

After a couple days Morgan perked up. The swelling in her leg is down, we're getting much less drainage from the holes and they're starting to heal. Best of all, her appetite has come back and she's eating enthusiastically. I spoke with Dr B this morning to report our results and he's optimistic. He said in a dog her age, even a tiny nick or scratch could cause an infection, so not to worry about it yet. He says if we're still getting drainage by mid week, we can keep her on antibiotics for another five days. 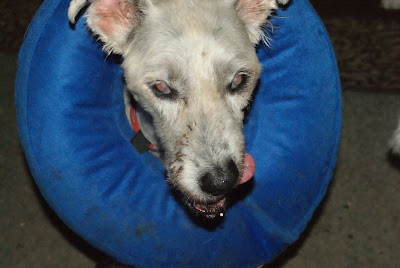 We talked again about quality of life and he gave me some guidelines:
Is she eating and drinking?   Yes
Does she remember her house training?      Yes
Is she interested in the other dogs?       Yes
Is she seeking affection from Rob and me?     yes
He says as long as she's still doing these things, she still has a good quality of life.

So no  Energizer bunny or cat with nine lives has more going on than my Miss Morgan.

OH, how familiar all of this sounds! We are happy that your little Energizer Bunny has more "go" in her. She is so much like Phantom - she is going to let you know when SHE is ready. We hope that is a long ways away.

We are also sorry to hear about your thumb. Not good timing for all those projects we know you must have planned.

Oh Miss Morgan! My sista!! So sorry abouts your infection, butts I am sooooo happy you are kickin' it's ass!!! I SO want to be you when I grow up! Sendin' lots of healin' vibes and AireZens and Ensure shakes your way!!
Oh, and lots of POTP for your Moms thumb...yeah,not gonna make those jokes again...hehehhee
Kisses,
Ruby ♥

We're sending you lots and lots of healing vibes. You are amazing, Morgan!

Oh Morgan! You go, girl!! Ruby has all "yes's" on the checklist as well. One day/week at a time with our little old ladies :-)

Such good news. We're happy for all the 'yeses'. She's still enjoying life.

Gee Sue, enough is enough. You'll have to tell your kids that you and Rob have had enough drama this year to last a lifetime. We're hopeful that the rest of the year will be uneventful and that next year will be better. Thinking about you guys and wishing you the very best.

You go Morgan! Such a strong, good girl!

I am always happy to see Miss Morgan still toodling along. I'm sorry about your hand.

Our Vet said - does she have more happy times than not? If the answer is yes, then it's not time. :\ But man - is it rough. I'm tearing up reading this - glad that Miss Morgan is still with you enjoying life and missing our little Doodle Bug!! g

Your Vet is very wise!!