Three Strikes and You're Out

Did you ever run away from home when you were a kid? I did. I was about four and got mad about something. I packed a suitcase with a book, my doll and a peanut butter sandwich and left. We lived in the country and I wasn't allowed to cross the street, so I put my suitcase down at the end of the driveway and sat on it for what must have been hours. OK, it was actually about five minutes, but it sure seemed like hours. I guess in that time my anger dissipated and I went back inside and unpacked. Well, today I again had the urge to run away. It's been a rough week in Portieville.

Strike 1....
Thursday morning I let the dogs into the back yard as I prepared their breakfast. Then they all came in to eat but I got that sense that something was wrong. I took a good look at Sebastian and saw that the white part of his left eye was swollen on the inside corner. It was also turning a lovely shade of pink. I took him upstairs to show Rob and by then it was even more swollen and looked truly awful. He was also trying to rub his eye with his paw which couldn't be good. I'm squeamish about eyes, so Rob took him to the clinic. Dr B  wasn't in that day but Dr M stained his eye to check for scratches. There were none but it appeared that the tear duck was blocked. 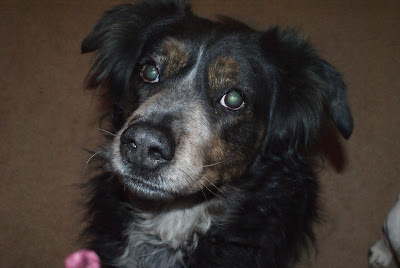 Strike 2.....
Friday was a big day for Fudge. Early in the morning we dropped him off for surgery. He was being neutered and this stud tail was being addressed. I also pointed out three growths to Nurse Sara and said to show them to Dr B. I left it up to him whether to remove them or not. I came home and paced. When I pace, my pack paces with me so it was an unsettling morning. I got a call in the late morning that Fudge had come thru surgery very well, his blood pressure and oxygen levels had remained good and he was starting to wake up.

At 4 when we picked him up the doctor gave me the good and bad news. First, he had removed the three growths, one on his back, one on his chest and one on the side of his face. They were all OK. He had performed the neuter and it went well, but there was a tumor in one testicle. It may be what was causing his recent personality changes. It was completely removed and should cause no further problems. 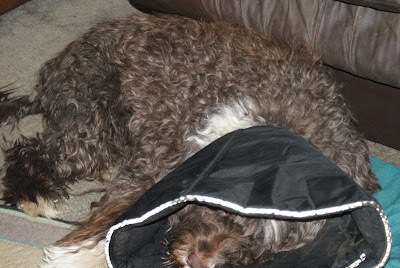 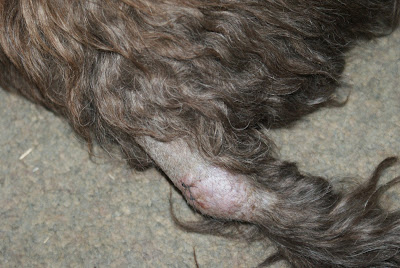 The tail is a different matter. The correct term for this condition is supracaudal gland hyperplasia. It's an infection in the scent glands at the base of the tail. In un-neutered dogs (and cats) the gland can be overstimulated by hormones and as in Fudge's case adenomas can form. If left unattended these can become malignant. Fudge had an adenoma and Dr B wanted to remove it. The problem is that the tail is a tight area, not a lot of extra skin to work with. He removed the adenoma and as much of the bad skin as possible leaving enough to close the incision, but he's not sure he got it all. He and Dr M both looked at it and just can't be sure. We're hoping it's gone and his tail will heal and because the hormones supporting the tumor aren't an issue any longer, that his tail will be fine from now on. BUT, there's always a but, if the adenoma starts returning, probably withing the next three months, Fudge will become a bob-tailed Portie. The only way to protect him will be to dock his tail. This doesn't please anyone, but you do what you have to do.

Strike 3....
Sydney, my crazy dog, is totally obsessed with squirrels. When she sees a squirrel, she doesn't see or hear anything but that squirrel. This morning after the other dogs were fed, I went outside to call Syd in for breakfast. She was staring at the tree and yes, there was a squirrel on the branch. I called her but she didn't even glance at me. The squirrel began to run thru the trees and onto the back fence with Syd in hot pursuit. I heard the thud when she hit the fence and I heard the scream of pain. 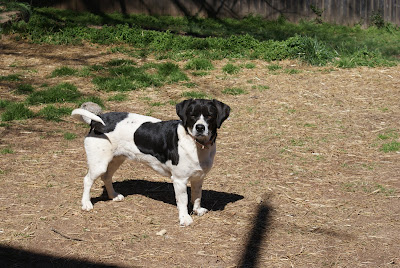 Rob rushed Syd to the clinic while I stayed home with the other invalids. When they returned after almost three hours, I heard the news. She has a partial dislocation of the right shoulder and she hit so hard that she ruptured a blood vessel. She's now on pain meds and is getting complete crate rest. She only goes out on leash to potty, then back to bed.

Does anyone want to adopt me?
Posted by Sue at 2:01 PM

Your 3 are done, you don't have to worry any more! That is a lot of vet visits. Sending POTP that everyone heals soon! (Hailey is the same as Syd, when wildlife is around, she is completely in a different world).

No, don't run away, your pack needs you - you always manage to pull them through. So sorry for all the issues. About that tail - sure looks very familiar, so similar to Phantom's. His were all malignant tumors. One ruptured and the vet was able to cauterize it and stitch it. The others ruptures but were too big for stitching. He was not a good candidate for any big surgery, never mind a tail docking. One thing that worked well for a long time was freezing the lumps, just like they do for precancer lesions. It worked very well on the small ones and was slowly shrinking the very big one. Just something to think about.

All paws crossed for a better week to be brewing.

Sending all of you powerful healing energy so you can all get back to normal really quickly. ♥♥♥

OMD, poor Syd! We're sending lots of AireZen and healing vibes for Syd and for Fudge. We hope Sebastian eye is pretty much all better! Our mom is squeamish about eyes too.

When it rains, it pours. You have your work cut out for you for the next few days. Best of luck to all of your patients.

Yes. Come on down... There really IS something to be said for having only one dog... Oh, and Otto wants Fudge to know that tails are over-rated and that you don't need one to wiggle your whold butt!!

Whatta week!! I'm sending all my best vibes to your household, both positive and healing ones!! Hope the rest of your weekend is boring and uneventful!

Ugh oh! Darn April fools . Three strikes is right!
Fezzik had stud tail before we neutered him and for 3 months after till his hormones subsided. We had to put baby powder on his greasy tail and then brush it in. Then we got to bathe the cat with dawn dish soap and dandruff shampoo. (just the tail and he was great, but cried) It is finally GONE. That powder, and bathing thing went on for about a month. No one told me it could lead to adenomas.....
We kept it very clean.
Good luck. dont be too disapointed if the stud tail keeps up for just a bit yet.
Hugs to the fur babies and to you

And we thought we were obsessed with cats! Paws crossed for Fudge's tail. We think if you tried to run away now, you'd have to take the dogs. So stay comfortable and ride out the wave...

Oh dear, that definitely sounds like a hard week! I'm sure that Fudge's tail problems will be all better now, BUT if he DOES have to get it removed, it's not so bad! I had my tail amputated when I was about a year and a half old because I kept hurting it. I have the cutest nubbin now!! We'll cross our paws that Sebastian and Mackey keep improving.

Here's to speedy and easy recoveries all around!

Hi Sue, we're sorry we've been gone so long. I read the post that you wrote after this one so that I could catch up a bit. Okay, your kids are just putting you and Rob through too much. Okay you guys, knock it off. Stay well. We took a vote and we'll adopt you. We'll make you an honorary Canadian but you'll have to walk a dog or two if you stay with us. But we'll feed you. Sound good?