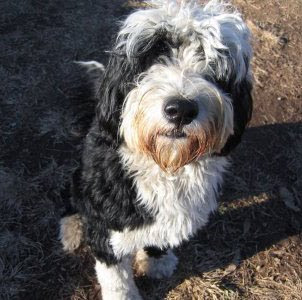 But the boy does have eyes and normally they are nice soft brown eyes that sparkle. 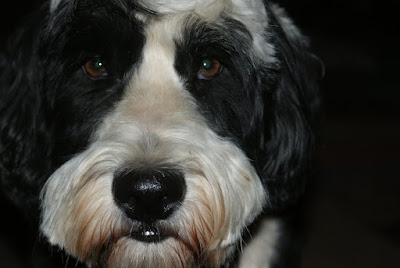 Noah has had problems with his eyes ever since our disastrous experience with crypto. The infection left him with colitis and at one time he was prescribed an antibiotic that caused a reaction. His reaction was to develop chronic dry eyes. We use Optimmune, the doggie version of Restasis, daily to relieve the dryness.

A while ago I noticed a small cyst on his left upper eyelid. At first it didn't seem to be a problem, but suddenly it started growing and Noah apparently felt like he had something in his eye, so he started rubbing it. The cyst became ulcerated and really started rubbing his eye and besides being ugly, it caused lots of mucus to start forming in the eye. It all became really ugly, red and goopy. I didn't even know if he still had vision in the eye. 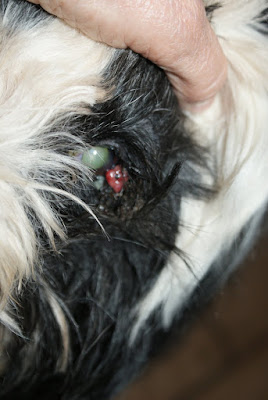 So Friday morning we visited Dr B to get his opinion. I was a nervous wreck, sure that he would tell me that Noah was going blind, but all he said was " That needs to come off." Fortunately, the cyst has a small stem so he'll only need to remove a small wedge from the eyelid. We scheduled the surgery for Tuesday morning and it should only take about twenty to thirty minutes.

We went over post op care and he assured me that Noah's vision should be fine once the growth is removed. Noah will be wearing a hat for at least a week and he'll get an antibiotic ointment as well as his Optimmune and pain pills. He'll also need drops several times a day. Don't worry, Noah loves attention and is super good about sitting for his eye medicine. Soon my boy should have pretty eyes again. 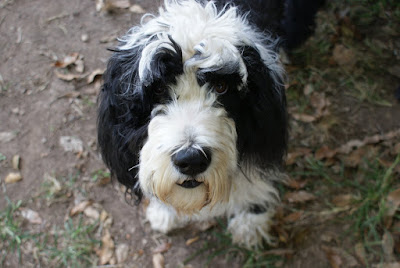 Noah could sure use some POTP on Tuesday. At 12 years of age, any surgery can be risky, but we think he'll do great.
Posted by Sue at 10:51 AM

You've got our POTP. We hope Noah's soon back to sparkly eyes (Even if you can't see them).

Bella goes in for all-day blood tests to see if she has Cushings. Poor thing she hates the Vets and shakes incredibly. I hate leaving her for a whole day.

All paws crossed here for NOah's surgery to go well. That looks nasty.

We will of course be keeping your most handsome Noah in our thoughts and prayers, and sending the best of vibes too -- POTP!! Let us know how it goes!

OH NOES!!!! Noah, I hopes your eye gets better after the surgicals! I gots my paws crossed over heres and sendin' you lots and lots of POTP and healin' vibes and lots of margaritas!!! (okays, so those might be for your MOms.....☺)
Lots of AireZens comin' your way!!
Kisses,
Ruby ♥

I am sending you lots of AireZen and POTP, Noah. You are sure one handsome boy!

Sending lots of POTP. We can't wait to see those eyes again