Since I lost my boys I've been feeling an overwhelming sadness. Several times I've sat down to post but can't think of anything interesting to write.

My three Portie girls are old dogs who mostly eat, sleep and poop. We don't play games anymore or do much that would interest a reader.

All three went thru a few weeks of stress after the boys disappeared from their lives. I spent a lot of time pampering and reassuring them. Now they have developed new routines.

Norma Jean has a nerve condition that restricts her physical activity and she's also dealing with some doggie dementia that makes life a little confusing for all of us. She's still a happy girl so we adjust. 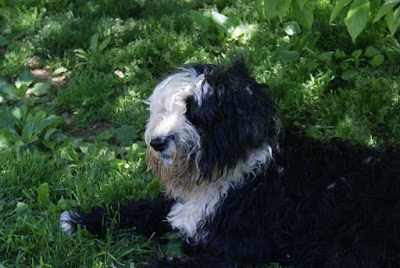 Tess and Lola both have some age related disabilities but they don't seem to know it.

Mackey tries to help with the older dogs. She wakes them in the morning and herds them around.

Sydney's dog aggression has gotten worse and she isn't allowed any contact with the other dogs. She does her own thing and with the help of a daily dose of Prozac, she's happy. 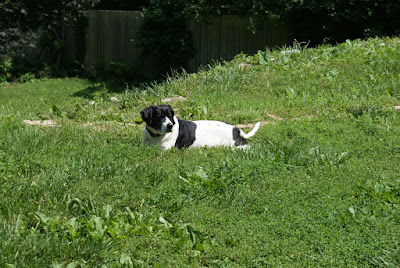 I've dealt with my depression by knitting obsessively. I made four dolls, a fox, two pigs, a mouse, two squirrels, an armadillo, an ostrich, an opossum, a witch, three Christmas animals a couple dogs, a cat and several others. I also knit a cowl and a blanket. As long as I'm busy knitting, the sad thoughts stay at bay.

When I spoke with Dr B about Norma Jean's problems, he was reassuring. He doesn't know what is causing her nerve damage but he says he still has more magic to use on her. He's been very supportive, knowing how painful it is to lose four dogs in a year.

I plan to keep the blog going, I'm just not sure what direction it'll take. Thank you to those of you who contacted me in concern about our silence. We're still here and we're pushing ahead.
Posted by Sue at 2:25 PM

We have been thinking of you. Glad to know you're working through the sadness. Having pups the same age does have its problems. Sounds like you're enjoying each other. Hope the rest of year is uneventful. We will continue thinking of you.

We think of you all the time, Miss Sue. Hugs to you♥

Glad you are back. I understand your sadness it is the price we pay for the years of love. I have two old guys and will be facing the major loss in a couple of years.

So glad to hear from you! I cannot imagine how hard this has been and am so sorry. Keeping my hands busy always helps me too. I think you have enough for and ark!! We moved last September and it was very hard but for the best. It has been really hard on our 2 furry boys. Horrors - going from the country to a neighborhood with people and dogs!! Oh my! We are all adjusting and finally settling in. Still thinking about you and the furry ones. Take care.

I've been wondering about you, and it's good to see a post from you. I know how you are feeling. Losing our 3 girls in June was really hard for me as well, and it took me a while to get my mojo back. And, I'm not sure that I really do. You take your time, be good to yourself, and remember that it's all a process, do what you need to do, and when you're ready, we'll be here, or on Facebook. Take care, my friend.

Thank you; I've been worried about you. I've taken up reading and sewing almost obsessively since losing my dearly beloved, so I really and truly understand your depression. I'm really sorry that Syd has never been able to truly become a member of the pack, but it's very nice that little Mackey is trying to help everyone out. You're in my thoughts, even when I'm silent.

It's good to hear from you, though we're sorry you and your girls are still having such a hard time. We will cross our paws that things improve for you.