As if the virus and the constant news coverage of the rising numbers wasn't enough to make me crazy, my dogs are competing to drive me off the cliff.

Less than a week ago we said goodbye to Lola. Afterwards I felt numb.  Then on Friday things got even crazier.

It started early last week when I was trimming Norma Jean's face. I found a fairly large warty looking growth on the side of her muzzle. It didn't seem to bother her so I made a mental note to show the vet on our next visit. 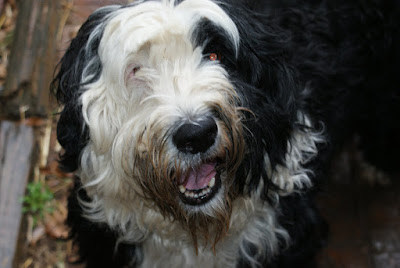 Friday afternoon we headed to the garage for doggie dinner. I was filling the bowls when Rob said someone was bleeding. I looked over and there were drops of blood on the floor. Then there were more and bigger spots of blood. I thought someone had cut a foot so I started checking feet. When I reached for Norma Jean, I got a handful of blood. The facial growth was bleeding.

I couldn't get the bleeding stopped with pressure so while Rob held a towel to her face I grabbed the styptic powder. We finally stopped the bleeding and I saw that she had sheared the top off the growth.

It was almost closing time at the vet clinic but I called and set an appointment for Monday. All weekend I kept a close eye on Norma Jean who loves to run her face along furniture. She started bleeding once more but somehow we made it to Monday. 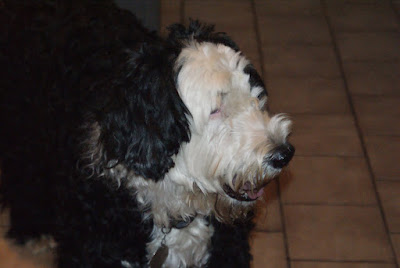 When we arrived at the clinic a tech came out and took Norma Jean inside for an exam. We waited in the car. In a few minutes Dr B came out with Norma Jean. The bad news was that she had taken off about half the growth by rubbing it. The good news was that it narrowed towards the skin so he should be able to remove it easily.

The next morning we dropped a hungry Norma Jean at the clinic.  Then I went home and paced while Mackey tried her best to distract me. Mid morning the call came that Norma Jean was out of surgery and we could pick her up in two hours.

The doctor said he had given her the same light sedative that he used to use on Morgan. It relaxes her without putting her out. Then he did a nerve block on the side of the muzzle. He removed the growth and cauterized the area so we don't have to worry about stitches and she won't need to wear a cone.

When we walked in the house I was removing my jacket when she disappeared. I walked into the living room to find her on the sofa sound asleep. She remained there until bedtime. 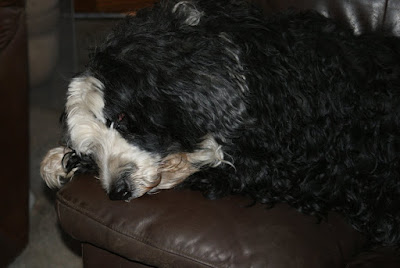 This morning she was ready for breakfast and is acting normally. Except for a shaved area on her face, no one would know anything happened. But my anxiety levels are reaching new heights. I guess I'll pull out my knitting needles and churn out some more critters.
Posted by Sue at 2:37 PM

We hope Norma Jean heals well - tough place to have that. Sending lots of POTP your way.

Phew....so happy it turned out well. Understand your anxiety completely!! You can relax a bit now.

I am glad it had a happy ending. You haven't had on for a long time.

Thank goodness you're okay, Norma Jean! We are sending you tons of AireZen and healing vibes!