The night crew left us another gift. When Rob took the dogs out in the morning, Bailey and Lola raced to the side of the yard near the fence and were inspecting something closely. Rob walked over and found a bleached animal skull. he disposed of it before I could get a photo, but said it was bigger than a squirrel, more the size of a raccoon. 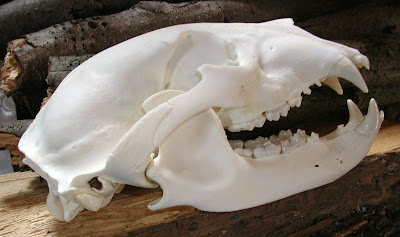 This is a stock photo of a raccoon skull. When he said there was a skull, I immediately thought of the squirrel Bailey caught and was sure it was coming back to haunt us. Instead, one of our night visitors must have brought this into the yard with him, then left it behind. The dogs were quite excited. We have woods behind the house, so I'm sure there are plenty of animal bones to be found. 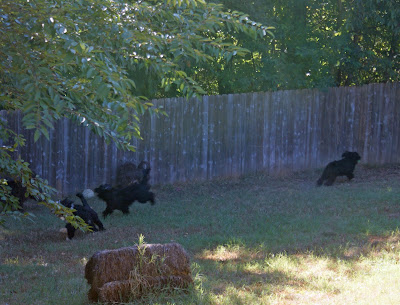 We had pretty nice weather over the weekend. It did pop back into the 90s yesterday and today the humidity is high again. Saturday, however, it was pleasant and the pooches enjoyed running around. 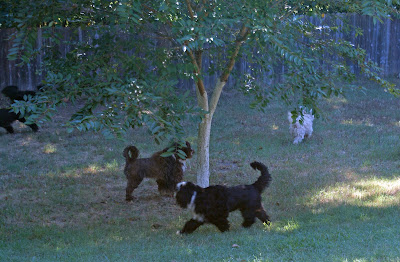 They spent more time outside than they have in weeks and explored all their favorite spots. 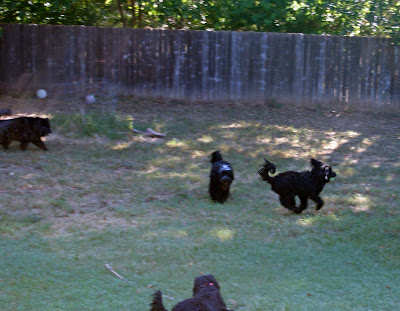 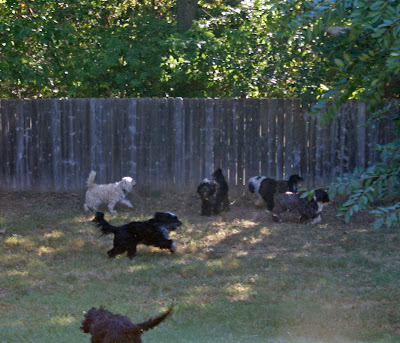 Sometimes they all run in different directions. 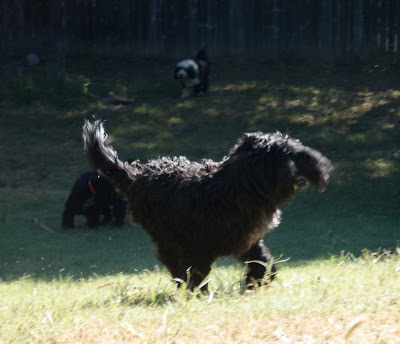 Check out the flying ear action in this shot. 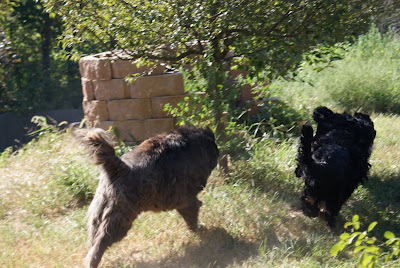 Everyone got into motion, including Tsar. 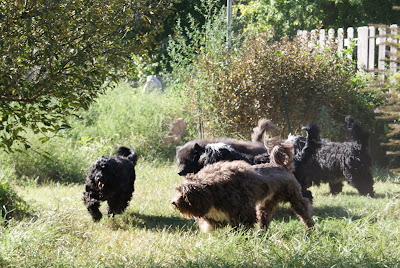 Here they must be checking for scents from the night crew. 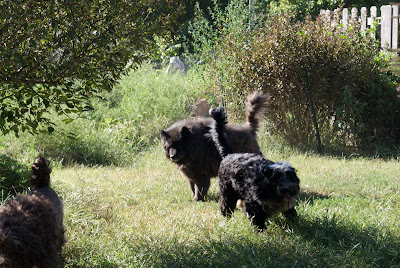 I called this 'the countdown' because it's post number 496. I've decided to have a giveaway for the 500th post. I haven't completely decided what I'm including in the giveaway, but there will be something for the human and the pet.
Everyone who leaves a comment from now thru the 500th post will get a number. If you leave more than one post, you'll get more than one number. After the 500th post, we'll select the winning number and tell you what the surprise package includes. Have fun!!
Posted by Sue at 4:56 PM

Oh I want a number - but more than that - I want to say how gross I think animal bones are and how much I love seeing your Wave of Porties. I wonder if it's the night crew my pack has taken to barking at at 5:30 a.m.? g

Here is my comment! Did I win? I want to win! Hehehe.

Hey! I think it is a little creepy to find the heads of animals in your yard. How do they get there?

Hooray for cooler wether. I can see you took full advantage of it to do gang style zoomies.

Cool! What a great way to celebrate the big 500!

ooh i love giveaways and i so love your snuffles cushion you made me which is here in front of me on my shelf. so hooray for a giveaway ans hooray for the gang.

Everyone looks like they are having so much fun!! Lots of love, Debbie and Holly

Your yard is proving to be quite interesting. We never get anything that cool here...Sasha would love it if we did.

What a clever idea to spread the news about your blog and to celebrate your 500th post by having a giveaway! I can't even imagine getting to my 500th post so good for you for keeping us entertained for so long! We love your blog!
How creepy to find an animal skull while out walking the dogs! Yikes! I wonder how long it has been hiding out there? Glad it wasn't me who found it or I'd be screaming!

You guys have your own dog park in your back yard! :) Can I come plays wif all of you?

Pick us a lucky number! It is so hot and humid here again too. And our yard is a mess. The new sprinkler system is in but they dug so many holes and the grass has now just about totally died out. Ciara is keeping Mom very busy with her dirty paws - lots of hole investigation going on. And then there is still the aerating/verticutting/reseeding to be done in two weeks. Could be a very long September for the MOmster and her cleaning.

We went outside but didn't find anything as good as you. Giveaways are so much fun kids..
Benny & Lily

The gang just looks soooooo happy to be out and running around again! Great action shots.

The skull is a bit creepy.

Looks like Everyone is having a grand time outside! How Lovely that you found animal bones!

Me, too, for a number. I am endangering my life to get this too. Its beastly hot and storming!

Stella is having her usual fits over the storm.

We love the Porties but Tsar as you know is my crazy favorite!

Love reading your blog, seeing what the dogs(& you, ofcourse) are up to. Thanks for the chance to enter your giveaway.
lyn.robyn.smith@gmail.com

Ugh. I don't care for animal bones either, but I love your action shots. What a happy, healthy pack of pups!

What fun... a giveaway! I am wondering how that bleached skull made it into your yard... it is a little strange isn't it. I so love seeing the gang zooming all over the yard. It must be such fun for them.
x

Our weather WAS cooler and now it's heating up again! UGH!
We saw our PWD friend Carlie on walkies this morning and did mom have her camera? NOOOOOOOOOOOOOOOO!

As I was reading your post and saw that first picture, I assumed you found that raccoon skull in your yard!!! EEEEWWWWWW! The other morning I found a "present" from the stray cats in the yard... Feathers and a foot. Just one foot. Yuck.

Ooooo, you are sly, aren't you? If we had found a bone-head like yours we are sure that our momma would have saved it to give to her grandsons to take to school FUR show an' tell☺

I'm glad our walls are so thick I can't hear the night crew around. And I'm glad our night crew hasn't left us any skulls! Congrats on approaching post 500! Glad you enjoyed your weekend weather. Remember, next weekend is Labor Day, so it will be getting cooler. Tell the pack to hang on!

We LOVE ear flappage pictures!!! And we also love the group zoomies - nothing better!

Everyone looks like they having such a good time! Charli wants to get out in the yard so bad but it's just been to hot. I love that ear action :>) I hope you have a great day.