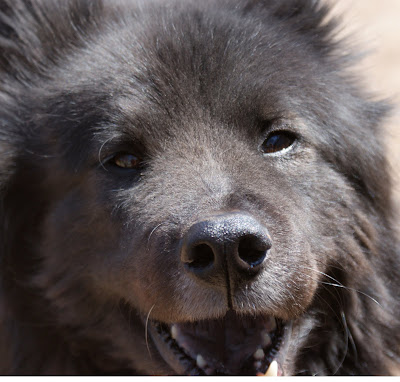 Tsar has a sense of humor. He enjoys playing tricks on me and the other dogs, but it's not always appreciated. Here's a recent example. 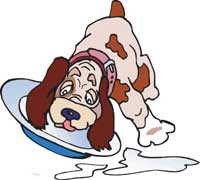 We keep the water bowl in the kitchen. It's a big bowl and because some of my dogs are a bit sloppy when they drink, it sits inside an even bigger bowl to catch the drips. Tsar like to sleep on the cool tile floor in the kitchen. 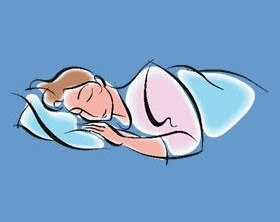 Lately when the other dogs wake up during the night and go downstairs for a drink, Tsar makes funny squeaky noises. Instead of just walking past him and getting a drink, they come upstairs and wake me up to escort them to the water bowl and make Tsar stop squeaking. This is not good for a restful sleep and makes me a bit unfriendly in the morning. 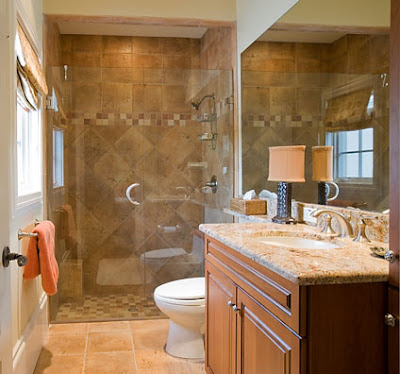 Last night after five nights of escorting dogs back and forth to the kitchen water bowl, I decided to end the game. I took a small bowl upstairs, filled it with water and set it inside the shower stall.

This was such a popular idea that everyone had big drinks before bed causing me to have a second bedtime outing so I wouldn't have to get up during the night to escort everyone outside. 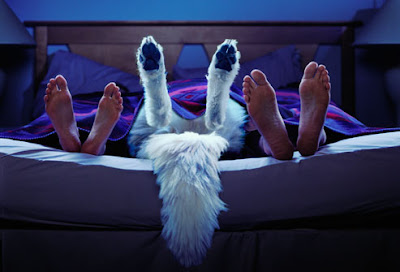 Last night we all slept thru the night, Tsar in the kitchen with his private water bowl and the others in the bedroom with the community water bowl waiting in the shower. Problem solved.
Posted by Sue at 11:26 AM

Good thinking Sue.. hahhahahaa.. getting up countless of times a night is a nightmare. You wake up feeling like you haven't slept at all.

Tsar is a real joker.. *LOL* and they are all actually afraid of his jokes.. hahahahhahaa

Yep... we haves two water bowls too. One upstairs and one downstairs cuz who wants to go all the way downstairs to have a drink in the middle of the night?

Oh - water bowl in the shower! Brilliant! I keep a large towl under our water bowl. I think Lucy throws as much water on the floor as she drinks.

LOL... we have a water bowl in the bedroom with us but for some reason lately, Sophie wakes up and forgets it's there and wines to go out to the kitchen.
I've had a sleeping issue as of late with Miss Lola deciding she needs a middle of the night potty break on a near-nightly basis.....

Tsar is a way too funny guy, and I love to hear Tsar stories!

Stella, when we take a morning walk, and its hot outside, uses her water dish to cool off her feeties, when we come inside. I told her today we are done doing that unless she wants to learn to mop!

That is hysterical. The things mommas do for us kids.
Benny & Lily

Ha Ha - see, that is the sibe in Tsar coming out - just too smart for the others:)

Tsar is going to be busy at night trying to defend two water bowls.

We've never been able to avoid the drips.....long beards.

What a charming story! It takes a smart dog mom to outsmart a squeaking dog and you beat him at his own game! Good for you!

That's very clever. It sounds like an excellent plan. We have two floors but there's a separate apartment in each (both mine) so there's a kitchen where I spend my days and nights, which is convenient. But if you have a more traditional arrangement, the bathroom sounds like a great solution.

Great idea! The last pic is so funny!

They come to get you so you can stop Tsar? What funny and smart Portis. I'm glad you solved the issue!

Sounds like you found the perfect solution for everyone. We used to keep a water bowl in the bathroom in the back of the house, so the humans didn't have to close doors behind the dogs when they decided they wanted a drink.

Funny... Sissy's kitchen bowl just got placed in a plastic tray with paw prints around the edge, because she's a water-slob...

And we've always had water in the master bath. Doesn't every dog?