What We Did On Our Vacation

Last week Rob had some time off, so I took a week away from the computer and the phone and we spent some R & R here at home. 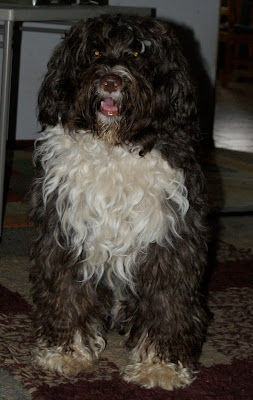 It was very hot outside, well over ninety every day, though we did have thunderstorms most afternoons. That meant a jittery Morgan due to the thunder, and grass that you could practically watch grow. Rob had to mow every third day and still with the sun and rain, it shot up and is still too high. 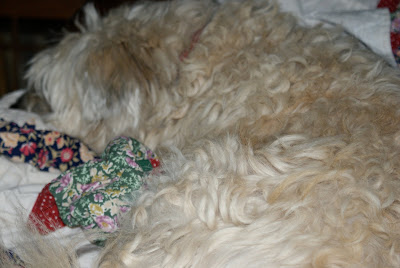 When it's that hot outside, my dogs want to be inside where it's cool. Rob and I both did a lot of reading, so the dogs did a lot of napping. Morgan found a spot on the end of Rob's sofa. 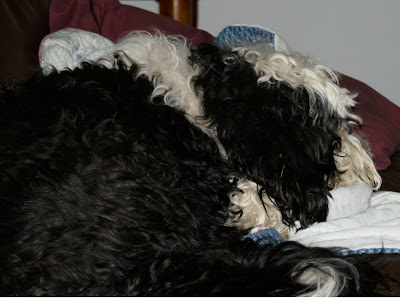 Noah had a comfy spot on the end of my sofa. 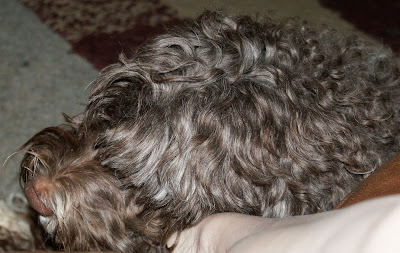 Fudge used my foot as a headrest. One of the tasks we started was dog trimming. Fudge was the first victim. Rob did half a trim on him and will finish him up soon. Till then Sir Fudge is playing King of the Jungle and showing off his bare butt to anyone who will pay attention. 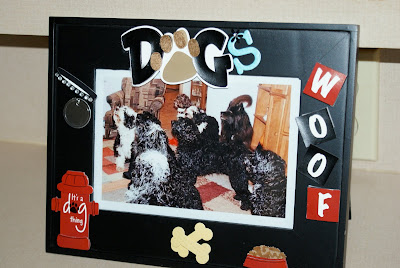 The mailman didn't get the week off and he brought me a neat package. Sunny had a blogaversary a little while ago and did a giveaway. It arrived last week and look what cute things she sent. 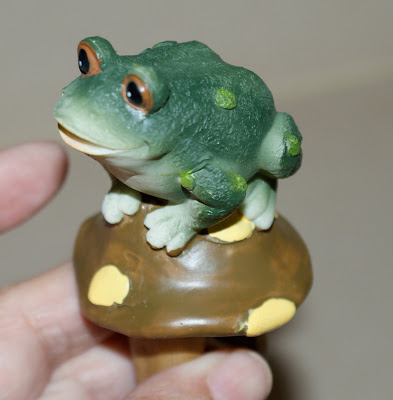 She included some additions for the frog collection, too. 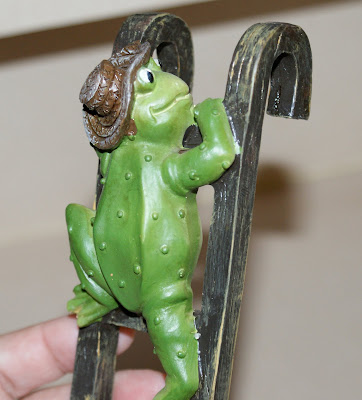 One of these days I'm going to photograph the frogs in my collection and give you all nightmares by posting them on this blog.

It was a relaxing week of sorts. I didn't compute and I didn't pick up my needles all week. By yesterday I was getting very antsy. It's time to start some new projects.
Posted by Sue at 10:20 AM

A week away from the computer is a wise thing to do :) Or away from anything which beeps :D

Rob will have a tough job ahead with so many to trim. One at a time.. i'm sure you both will get around to getting everyone trimmed... including the grass :D

Glad to have you back Sue! Love your pics of your pack :)

We had business in Peoria for a while. The heat and humidity in the Midwest is astonishing. You can just about hear the corn - and grass - growing.

Glad you had a nice week off, even if Rob didn't escape the mower.

Sometimes one needs a week away - easier said than done though!!

Gotta love that from climbing up the ladder.

I love Fudge - even with a nekkid butt! I was getting worried about you. Glad you took a break. g

Love the lion cut view of Fudge. Glad you had a nice week off!

hi portuguese curls~! :)
what great pressies--especially loving that frame~!! :D
glad you all got some well deserved R&R~!

What nice pressies!!! Glad to see you back!!! Lots of love, Debbie and Holly

We keep tellin' our momma that we need to take a break like the one that you did, yesh, we do. But she says that she has to check email for her work and that she needs to work to buy us treats, so we said, OK but she can't do it alla' the time and she said OK. That's OK, right?

I want to see the frogs!

We are probably going to be away for a while too, but it won't be quite that relaxing. Family coming in and Phantom's surgery and more and more. It was 102 here at 5:00 this afternoon with heat index of 114 - bet you can't guess what we did all day:)

I think what you did is more correctly called a "staycation" but I have always like a vacation at home too.

But I am glad you are back!

You guys must have had some nice quality time with mom and Paw. We thought you were pillows or rugs for a minute. We could find your heads..BOL
Benny & Lily

That was a successful vacation. Long enough to relax and kind of miss the day to day. All refreshed, right?

We were wondering where you were. Sounds like it was a great week.

We find three scotties hard to keep trimmed, can't imagine doing your pack. (and keeping the grass trimmed, as well.)

Glad you all had a nice and relaxing week!
Kisses and hugs
Lorenza

Now if only I could get away from the computer for a week...then it REALLY would be a good vacation!

there's nothin better than resting and relaxing with your doggies. snuffles never leaves my side. so glad you had peace and quiet.

It sounds like you had a wonderfully relaxing vacation! Love the froggies!