Can I Have A Do Over?

Some days it would be better to just stay in bed all day and pretend they never happened, but a whole week of those days? What did I do to deserve this?
Sunday during the night we had a thunder storm. Of course that meant we had to share the bed with Morgan. She shared my pillow, but at least she wasn't kicking me. She kicked Rob instead. 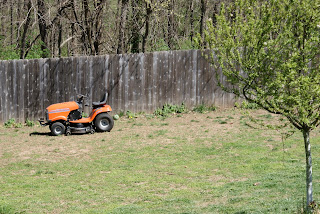 Monday morning we picked up a new battery for the riding mower. When Rob tried to start it on Sunday afternoon the old battery was dead and though we tried charging it, it wouldn't hold a charge. Monday we put in the new battery, started the mower and did two passes of the yard before the mower quit. Of course, it quit at the very foot of the hill. This morning the repairman pushed it up the hill and took it away for a checkup. We're keeping our fingers crossed that it's an easy fix and that the twelve year old mower doesn't need to be replaced. Let's hope it's fixed before the grass gets this high. 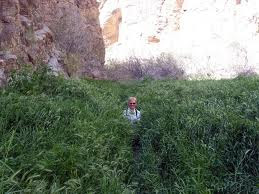 Monday night, as I was getting ready for bed, Rob told me one of the dogs had peed on the kitchen floor. This wasn't impossible, but very unlikely as they had just been outside. On closer inspection we discovered that the twelve year old dishwasher had peed all over the floor before dying.  There had been signs that it was having problems, but I kept hoping I was imagining the problems. 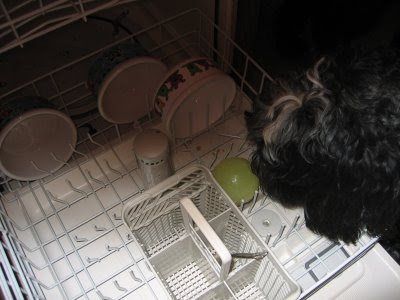 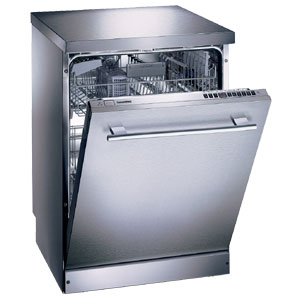 Wednesday morning was spent at the hospital as Rob had some tests done.  He was sedated and sleeping while I drank endless cups of coffee and worried. 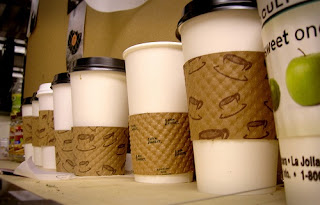 Rob slept all day, so I did all the dog feedings and outings and I was really tired by 10 PM. I took the dogs out for their last call and Bailey got Monkey past me at the door. I thought she'd bring him back, but she didn't. 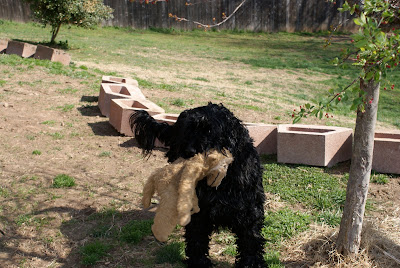 I went out with a flashlight and saw Monkey at the foot of the hill. I didn't want to walk down in the dark so I let her sleep with her duck.

The duck has a very realistic sounding squeaker and I didn't want to hear quacking all night so I told her if I heard the duck, I'd come downstairs and take it away. 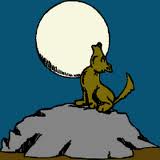 I got in bed, turned out the light and noticed that the coyotes were howling behind the fence. Unfortunately, Bailey also heard them and started answering them. I lay there thinking that surely they would soon stop, but they went on and on. Finally I got up and went to the door to the girl's room and told Bailey to be quiet and go to sleep. She did.

Rob was still snoring thru all this so I finally fell asleep. Then I felt a cold nose against my shoulder. It was Samba asking to go out. Now I know that being on Prednisone she has to go out more frequently than the other dogs, but I think this nighttime thing has become more of a habit than a necessity. I glanced at the clock and it was 1:30. I considered telling her to go back to sleep, but I saw her eyes and thought she might really need to go. 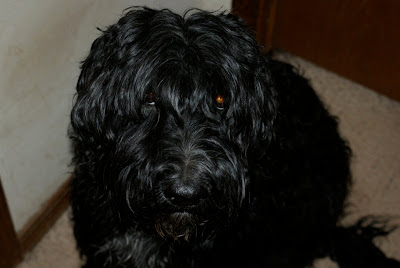 I fumbled for my robe and slippers and went to stand on the porch while Samba did whatever she needed to do. I wasn't prepared to find a cat sleeping on the porch. Samba was happy to chase it. I put her on the chain I keep attached to the porch rail. I don't want to have to chase a dog around in the dark. Samba hates the chain, but I was very glad it was there this time.

I went back to bed and heard Samba throw herself onto her pillow and make a loud sigh to let me know she'd rather be chasing the cat. I ignored her and went back to sleep.

At 3:20 Morgan started shaking her head, flapping her ears and rattling her tags. She kept it up until I dragged myself out of bed and grabbed her. I pulled her into the bathroom and did my best to clean her ears with tissues and cotton swabs by the light of the nitelight. I removed her collar so if she continued to flap her ears I wouldn't hear the tags clanking. 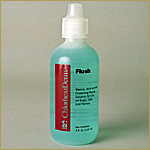 At 5:15 the Tess alarm went off telling me that the girls were awake and ready for breakfast. I staggered to the garage, fed everybody and cleaned Morgan's ears with blue ear cleaner. Then I sent them all outside. When I called them, everyone came back except Morgan. 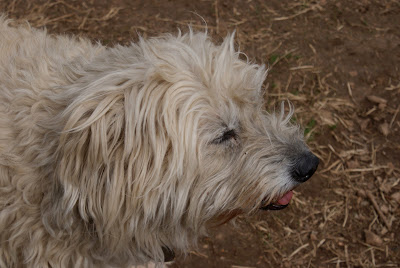 I grabbed a flashlight and went outside. There was Morgan rolling in a pile of dirt that Rob had dug up for the new brick wall. I was not about to bathe her at that hour, so I wet a towel and cleaned off as much of the mess as I could. It was mostly around her head and ears.

I put the girls back in their crates and told the others to go to sleep and I got back in bed and immediately fell asleep. About 7:30 Rob woke up feeling refreshed after sleeping for a whole day and night. He wanted me to help him chase the dogs outside, then have breakfast. I felt like a zombie. 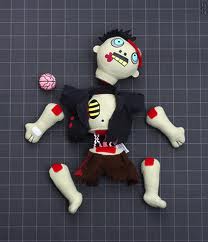 I'm still up, no nap today, thanks to mower repairmen and dishwasher shopping. So, that's my week so far and it's only Thursday.
Posted by Sue at 9:34 PM

I'm exhausted just reading this. May your life smooth out for a while.

Yikes, at least you got it all out today so the rest of your week should be blissful. I giggled reading out the ear-flapping-dog-tag-jinging incident. I can SO relate!

Oh you poor dear. What a rough day - week.

I'm curious - why did you switch from front-loading to top loading laundry machines? most people go the other way.

My job has me so mentally exhausted that by the time I get home on Thursdays, I'm mush - literally. g

momma said something about valium...whatever that is...BOL. Hope things calm down. We will keep our feets crossed for you
Benny & Lily

We hope your weekend is much, much better! Horrible week; but a good read for us!

Hope your weekend will be much better Sue... and hope everythings good with Rob.

You are such a tough cookie.. i really salute you. Hang in there ya!

Good gravy. Enough is enough!! I hope you have smooth sailing for the rest of the weekend.

Life in PWD-land is not good right now; I hope it improves. I hope Monkey survived his night outside. You'll have to let me know how the new DW works out. I have 3 that worked great, until the detergent makers took the phosphates out of the detergent. Let me know if you find dishwasher detergent that doesn't leave white scum on the dishes, and if the new DW is better than the old. Tell Sky to let me know if it does a satisfactory job on toy cleaning, too!

When it rains, it pours, both figuratively and literally. We hope the sun comes out tomorrow and you have a good long stretch of better luck. Mom says she is very familiar with those jingling tags and has done the same thing to stop the noise:)

Hope the weekend goes much better.

Oh Sue....I so hope today has been a better day and you have a good weekend!!!

YIKES! We sure hope things have settled down and you have an awesome weekend We are sending lots of positive vibes for Rob.

yay so glad you found me again, thanks for the warm welcome, and we will catch up all our news soon. Hugs to you and rob and all my lovely doggies, from me and snuffs.

Wow that is the week from down under! Glad to see you made it through the other end with a great sense of humor! Here's hoping the weekend brings some rest, a dog bath for someone, healed ears for another and a new appliance!

My goodness, you've had a long week! Fingers crossed for calm and relaxation on the horizon.

Yowee, what a week. You poor thing. Hope you catch a break over the weekend.

I'm catching up on blogs after neglecting everyone, again. How is Rob? Everything OK, I hope.

What a week. You definitely deserve a do-over!