Yesterday was a beautiful day, warm and sunny. Today is starting out the same way, but severe storms are forecast for the next few days beginning tonight. This is the beginning of tornado season here in tornado alley. The wind is already picking up and we decided the dogs could use a good run before the storms get closer. 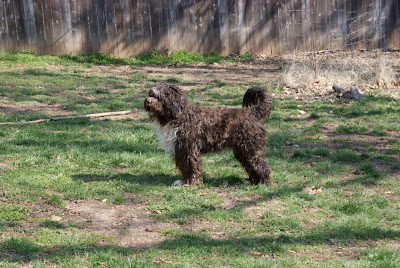 Everyone was happy to get out and run back and forth across the yard. Tess and Lola led the way. 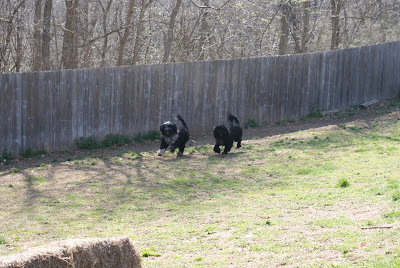 Pretty soon others were joining them. 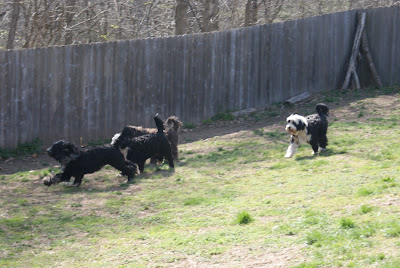 Bailey took Monkey out with her. 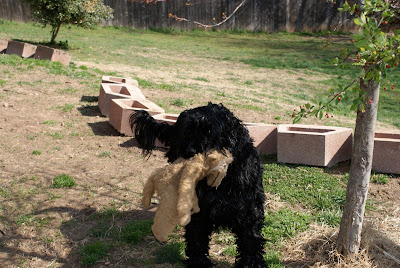 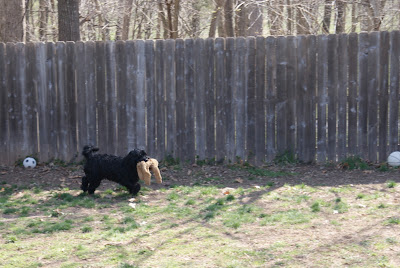 She wanted to run with the others, but Monkey was getting in the way. 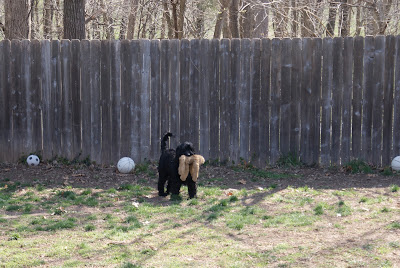 She stopped running with the pack and I could see that she was trying to decide what to do about Monkey. 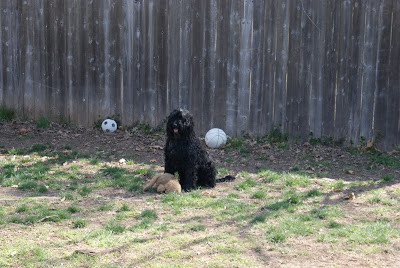 She sat down with her friend. 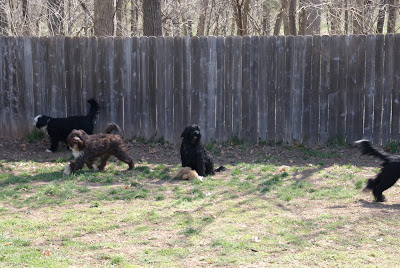 The others continued to run back and forth past her. 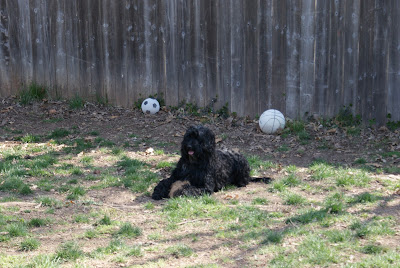 She made up her mind that she had to stay with her friend while the other dogs played. 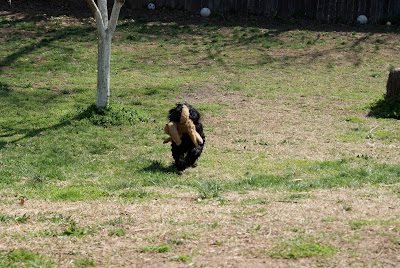 Finally, it was time to go inside. I called and Bailey came running to the house carrying Monkey with her. She takes her responsibility to her friend very seriously. She even gave up a chance to play with the rest of the pack in order to stay close to her pal. Bailey is a good friend to have.
Posted by Sue at 12:58 PM

Oh Sue. That's quite touching. My terriers have always been rotten about sneaking a toy outside, but almost NEVER does it come back in unless I see it abandoned in the yard and "fetch" it for them...

Such a sweet story, Sue. I wonder if she has memory of when her friend was lost for several days?
("Thats NOT gonna happen again!")

I need to go to the Pharmacy before whatever is blowing in gets here. It looked like we were gonna miss the big storm they are predicting, but from the looks of things now, I am not sure!

Wouldn't you love to know what goes on in tiny dog brains? Like maybe Monkey will learn to run with the big fellows if I take it out with me.

I'm a new follower- hi! Adorable photos and such a sweet story. Do you breed Porties?

That's so sweet of Bailey. Maybe she remembers the time Monkey went missing. We hope the tornadoes miss you this season.

What a devoted friend she is. I hope she decides to let someone monkeysit for her once in a while so she can play with the pack, and mostly I hope your storms aren't too bad.

I love Bailey playing with her monkey. She's such a doll!

Everyone should have a friend like Bailey - willing to give up her own fun rather than forsake her pal.

Some wild weather on its way here now, hope it misses us and you.

Oh Sue, I also thought that was a sweet story!!
Our pups will do the same thing and leave it outside afterwards and I have to send someone out to 'get the toy!'

I hope you've had an enjoyable Sunday!!

Aww that is so cute!!! Such a great friend you are Bailey!

Bailey, You are so much better with your toys than I am!
I take them out and drop them in the pond and leave them to float(sink), or let my sister bury them.

Be safe and sound,
Wyatt

I actually have family in Syracuse! We are in the Mohawk Valley, farther East. What a coincidence though, I've not met another blogger so closeby.

The first thing I thought when I saw your page was, "Ohhh, I wonder how she feels about Obama??" I know how a quickly a celebrity endorcement can cause breeds to be coveted, unfortunately, those who haven't done their research! It's only a matter of time before the Portie rescues are busy and it's such a shame. The beautiful breed have flown under the radar for so long.

It was a touching post Sue, I enjoyed reading it thank you for sharing. I love to see your pictures to.
best wishes Julie.C

What an adorable story - Bailey is indeed a good friend to have. Monkey is very lucky.

Beau takes toys outside to die. Because nobody will play with them once they've been soaked by a seattle rain.

Stay safe during the storms. g