I was pretty unpopular around here this morning. I had to tell the pack that they weren't getting any breakfast. They were not happy and I had many complaints. The reason was that three of our pack were heading for the hospital early in the morning. 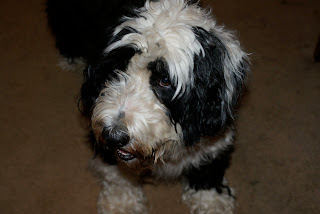 Noah needed a blood test. He's been on his thyroid medication for just a month and has already dropped about five pounds. Once his blood was drawn, he came home and had breakfast with the remaining pack members. 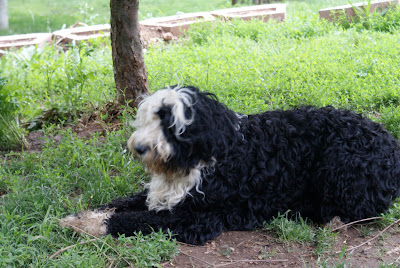 Norma Jean remained at the hospital and had a small skin mass removed from the rim of her eye. It didn't require a stitch and she'll be good as new in a couple days. We chose to remove it now because if it grew it could distort the eye rim and be harder to remove. 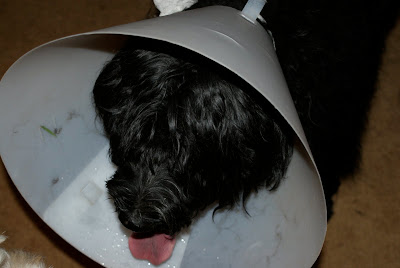 Samba had a papilloma removed from the top of her foot. She had stitches and will be wearing the cone of shame for about  a week. She's already smashed into the backs of my legs, so I should have a whole new batch of bruises soon.

Both girls had only local anesthesia which amazes me. Dr B tries to use the least possible, but with my squirmy dogs it's surprising that they hold still enough for surgery. They both came home after only two hours, had breakfast and are now resting. Now I can relax. I'm always uneasy when my babes are away from the pack.
Posted by Sue at 1:10 PM

Glad all went well, and that all returned no 'worse for wear!' ~Breakfast for everyone!!!!~ :-)

a familiar feeling. I'm a total basket case when I have to take my guys in for teeth cleaning.

Whew. That was fast! I'm glad everyone is back home and recovering. Well... except you. You'll have bruises for a while yet...

A good thing to get these things taken care of, even though it affects your in-house popularity!

Its good to hear everypup is home and OK!

What a busy day for everyone. Hope for a speedy recovery.

gosh a rough beginning of the week around your place; glad I'm not there!

Busy morning for the vet. Glad to hear everything went well and everyone's home together and recovering - even if the cone of shame is involved.

Love that your vet uses only the local when needed... :)

No breakfast.....no wonder there were complaints.

We're glad everyone is back home and had problems attended to.

SHE reckons if there's a cat next door to the treatment room. We'd hold still for open heart surgery and never notice.

Glad it went well for all. Gee, just one hungry dog is too much grumpiness for me!

Wow veterinary adventures can be overwhelming. our staff has suggested that Gordy and I have a lemonade stand or get jobs to help pay for our vetty care.

What a day! Paws crossed that everybody is OK for a good long while. You deserve a break.

sounds good, but don't they know we could do without the lampshade
Benny & Lily

Yikes, a three-fer! Hope everyone is doing well. Jed is also back in the Cone of Shame unless mama has time to watch him like a hawk, so he is full of empathy for Samba. And Abby is sympathetic with all the non-patients because she's had breakfast deferred a few times on account of Jed's vet appointments. Get well soon, gals!