I'm afraid the Grinch has been here. I think he's taken up residence here. 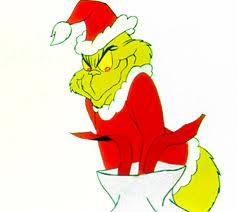 As you all know, about ten weeks ago Morgan tore her cruciate ligament. She's been on rest and pain medications ever since and she's doing well. 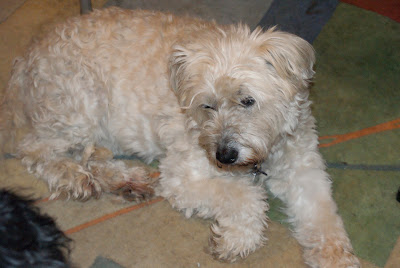 About three weeks ago Samba started showing pain in her back foot. Dr B examined it and thinks it may be a tendon injury. She's on rest. 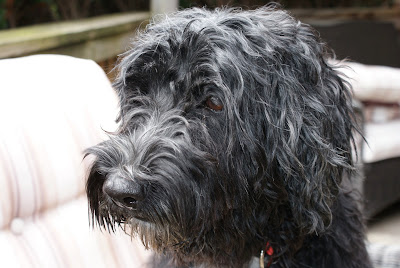 Two weeks ago Bailey started limping. I gave her something for it and after about four days the limp went away. 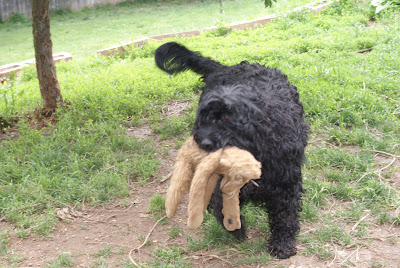 Thursday morning when I let her out of her crate she was holding her right back leg up and wouldn't put any weight on it. I started giving her something for inflammation and pain. She's now putting weight on the leg, but is limping again. 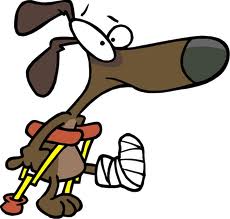 Bailey has an appointment with Dr B on Monday morning.

Then yesterday morning when I called Tsar to get up for breakfast, he screamed in pain. I checked him over and couldn't see what was wrong, so I gave him his arthritis meds and watched him. He stood and sat hunched up and tried to avoid lying down. If he did lie down, he'd scream in pain when he tried to stand up again. I gave him some pain medication at bedtime. 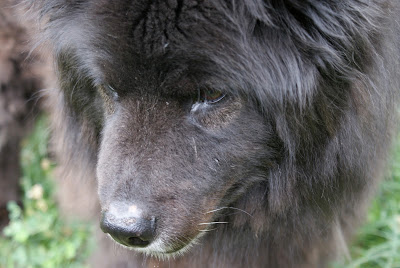 This morning we called the clinic first thing. Dr B wasn't in, but Dr Missy saw him and my boy has a bulging disc in his back. Tsar is on rest, pain meds and muscle relaxants. 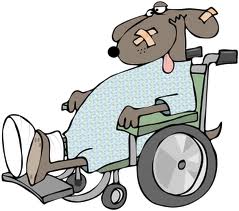 I've tried to be a good girl all year, so why has the Grinch moved into our house this Christmas? Four of my ten dogs are currently on rest and meds for leg and back injuries. This is not what I wanted for Christmas.
Posted by Sue at 1:09 PM

Oh Dear, that doesn't sound good. Hugs to all. Come on 2012 for you. We are wishing for a happy and very healthy new year for you all. Take care. No worries, and love, Stella and Rory

Major bad luck happening there. Sounds like the Grinch has settled in. Maybe you should have an exorcism.

Hope all the pups are feeling better soon....specially Tsar. That's a lot of dogs to 'keep quiet'. Roxy only lasted a day and a half of her quiet time.

Poor babies! You have been a good girl all year, so this is just not fair. The Grinch must have gotten you confused with some butthead on the other side of the block. Hope they are all feeling better soon.

Sorry to hear that...... no one likes to be in pain! Hope it gets better for all real soon,

Oh no, that is just awful. We hope all the pups improve quickly. If Tsar is anything like us, he really must be in pain. We sibes tend to be foolishly stoic and don't let on when we are in pain. Tsar, pal, we are so sorry about your back - feel better along with all your packmates.

What a catastrophe! My BFF Tsar added to sick bay, plus the rest of the dogs suffering. What can we do to help you help your beautiful pups??

It must be the Grinch, that nasty thing! You take such perfect good care of all of your pups. We will keep them in our thoughts, pray some prays for them and hope for the quickest recovery. Could this be weather related somehow?

OMGosh - that doesn't sound good at all. How old is Tsar? Abby had a bulging disc that was removed. Hope everyone recovers nicely. g

Oh my heavens. This is really too much all at once. I think you will need to convert your estate to a doggie hospital. I hope that everybody can get plenty of rest and feel better. I am sending Mango vibes your way for sure.

Oh Sue. I'm so sorry. I know this is tearing you to bits. We're crossing paws, slinging drool and other forms of wishing your pack well!!

Oh no! Our paws are crossed for all doggies to be free from pain and all better and happy!

We is sending' some boxer puppy prayers to all of you. Please keep us posted.