We had more snow on Friday and it came along with freezing rain. It was messy and cold and very unpleasant. We had to reschedule our vet appointment because we live on a steep hill and it was so slippery that we didn't want to try it. The dogs didn't even like the 'wintry mix' as it was termed. I'd let them out and they'd run right back in again.

Yesterday was a gray day but at least nothing was falling from the sky. We managed to make it to the vet clinic so that Morgan could have her sutures removed and Fudge had his annual checkup. He did great. I overshot the mark with the dieting though. Fudge has dropped six pounds since last April and Dr B said he should gain one of those pounds back again. He told me not to be so stingy with the treats. Fudge gave him a big kiss for that. Don't you wish your doctor would say that?

Today the sun is shining and the temps are above freezing so the dogs decided to enjoy their outing. Sebastian thought it would be great to lie in the sunshine. It didn't seem to matter that he was lying on snow and ice. 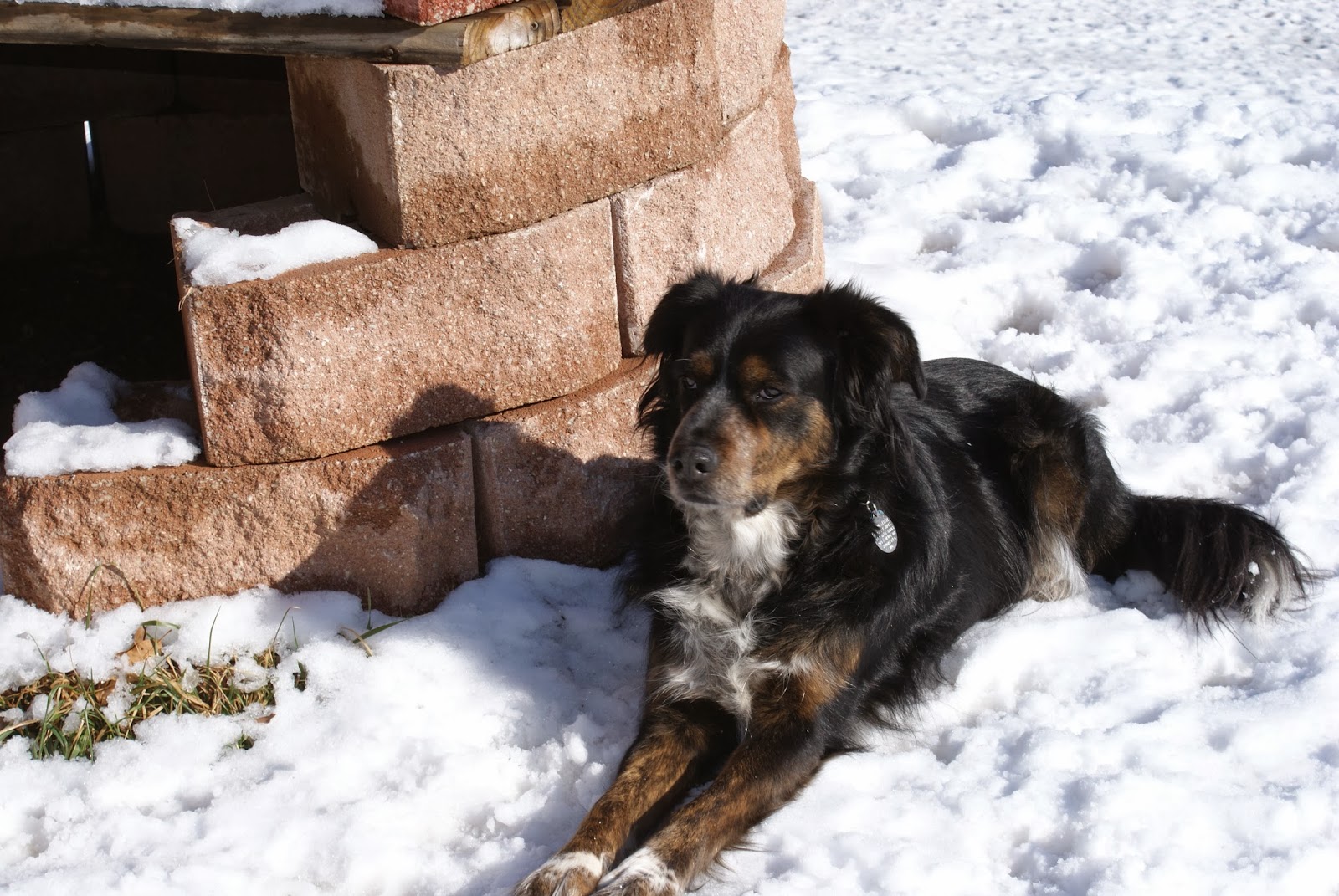 The girls were looking for things hidden under the snow. Mac found a ball and Sydney found a walnut. 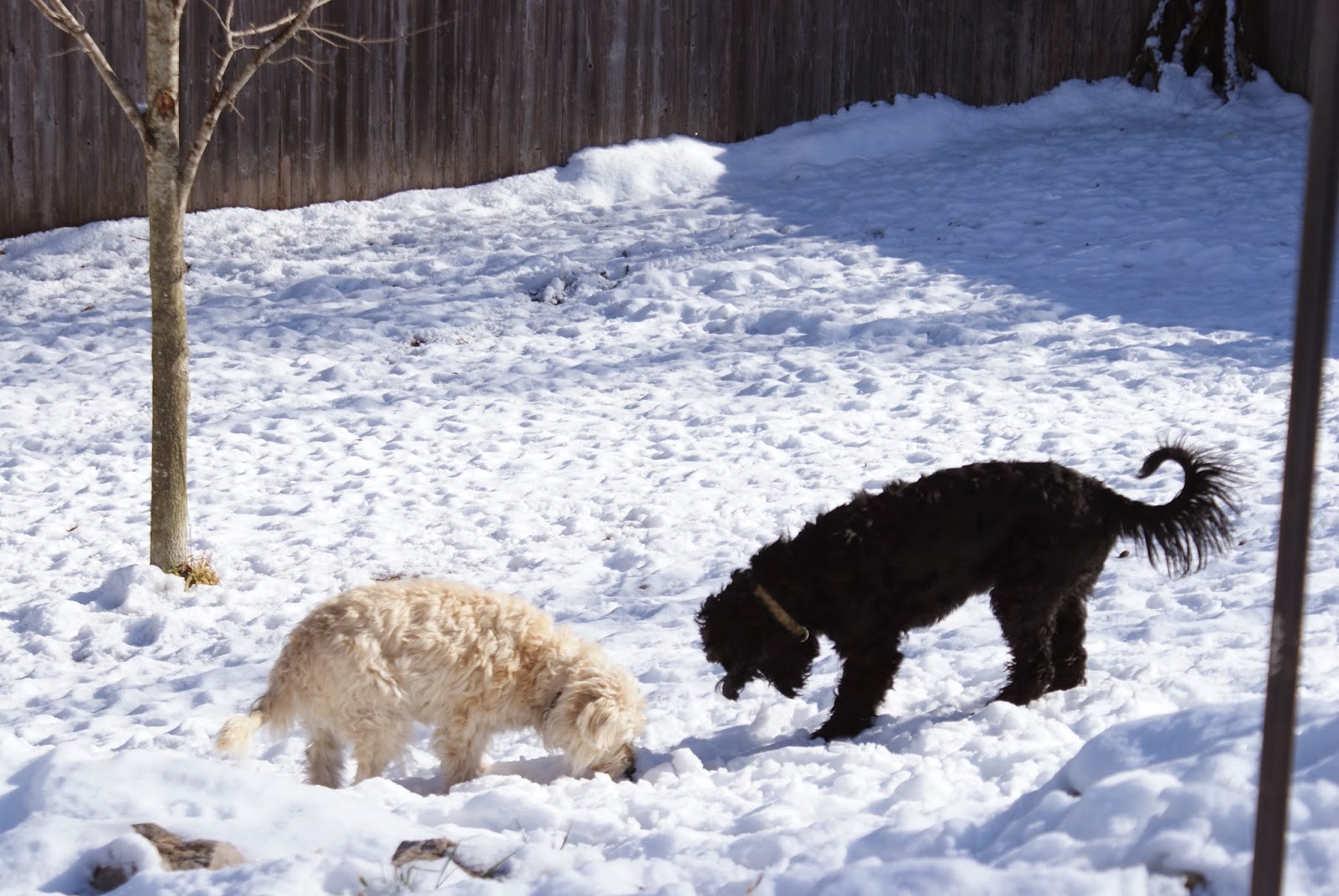 Then they discovered that by jumping on the trampoline the ice would break into little pieces. Everyone wanted a piece of ice to chew on. 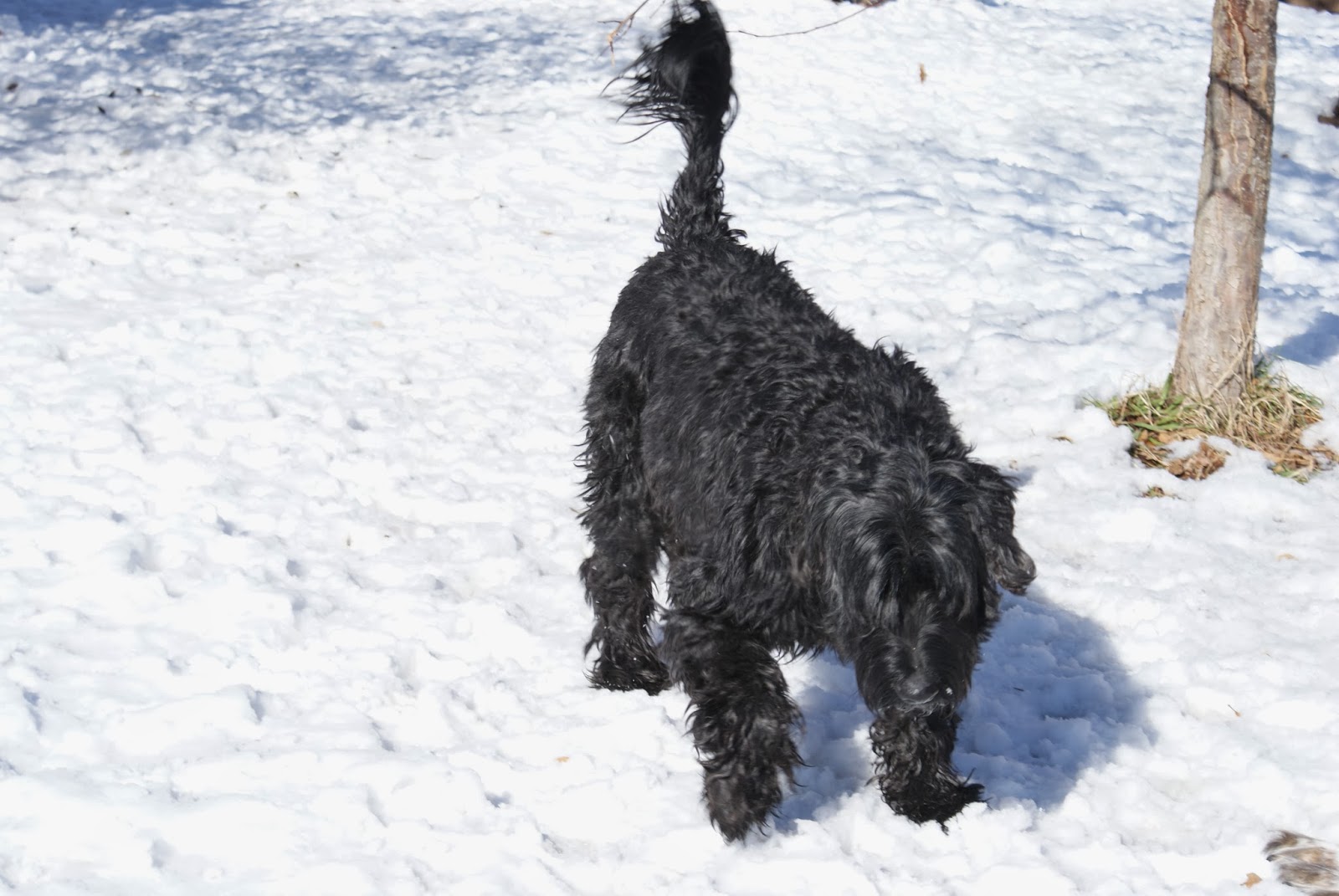 Here's Norma Jean with her piece of ice. 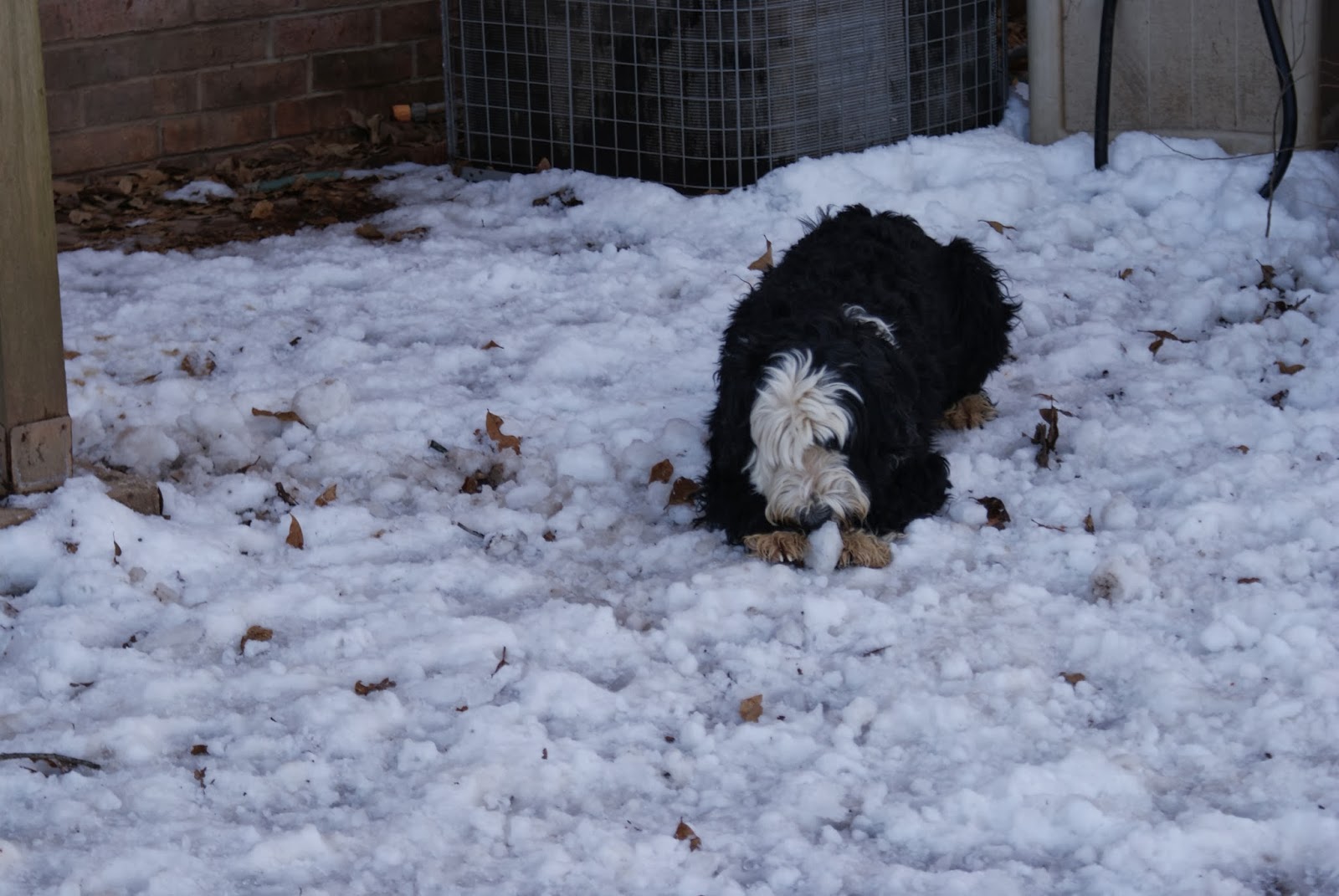 Tess is selecting her piece. 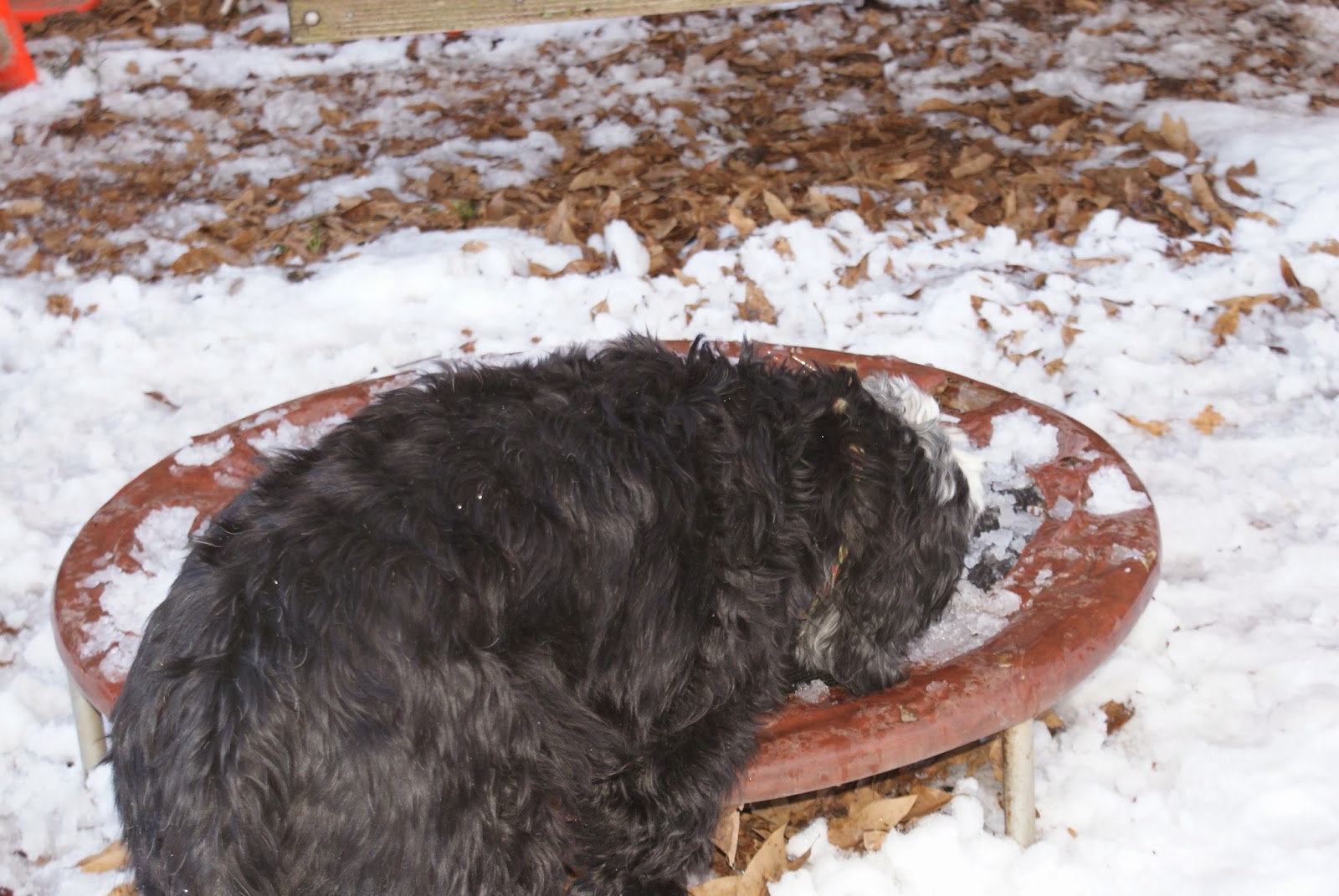 Fudge was having trouble choosing which piece he wanted. 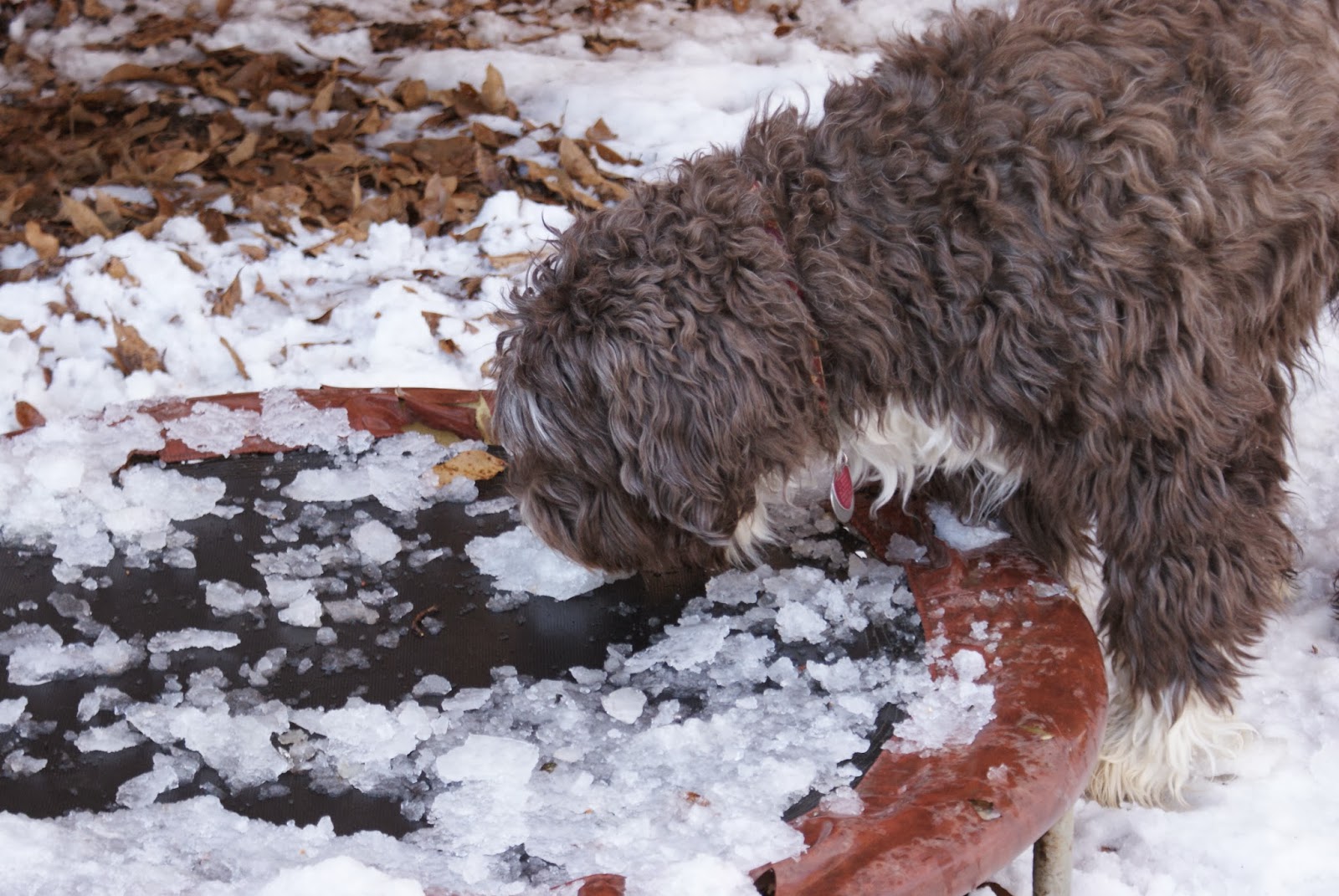 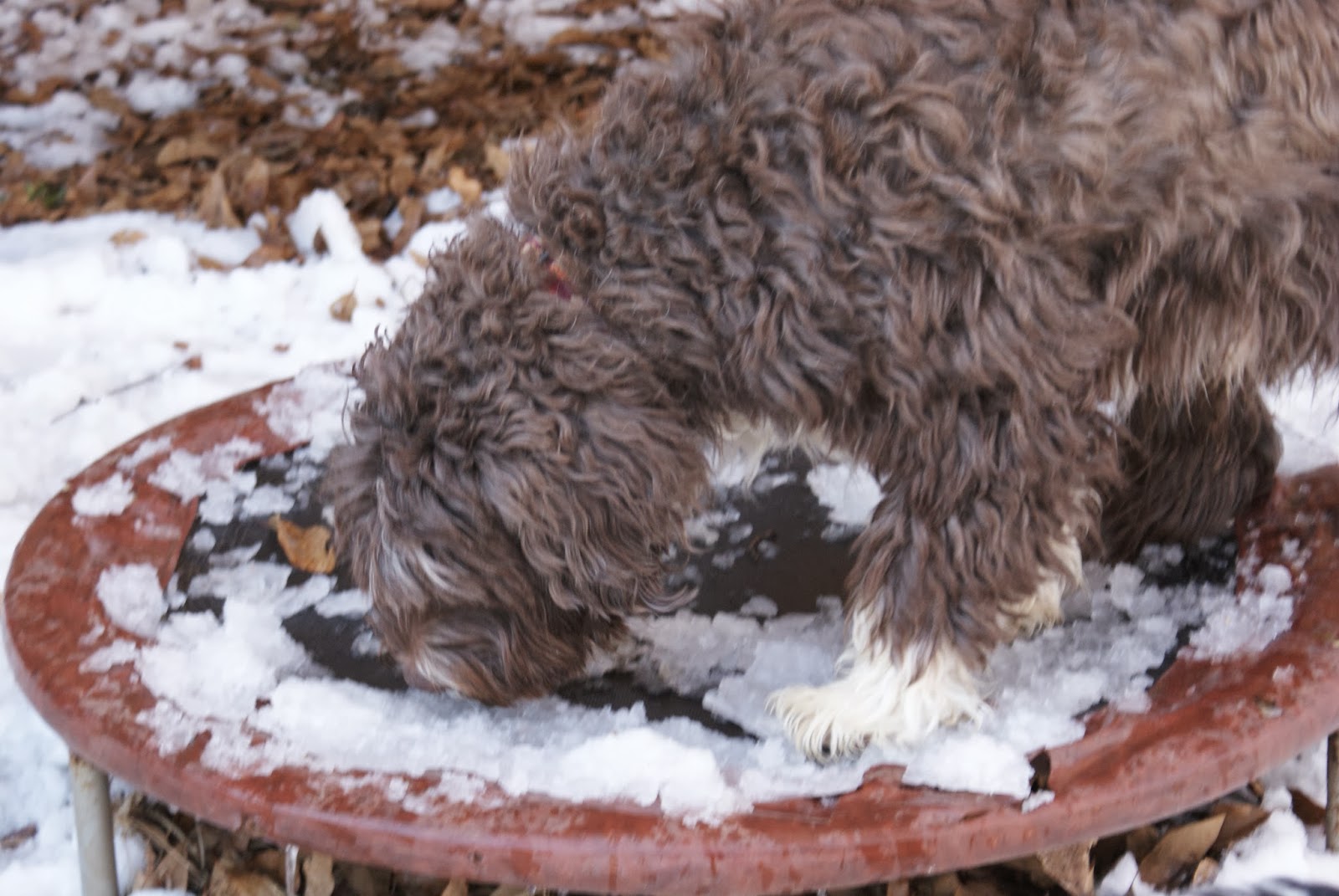 Sydney and Fudge made an important discovery. The wading pool is full of ice. 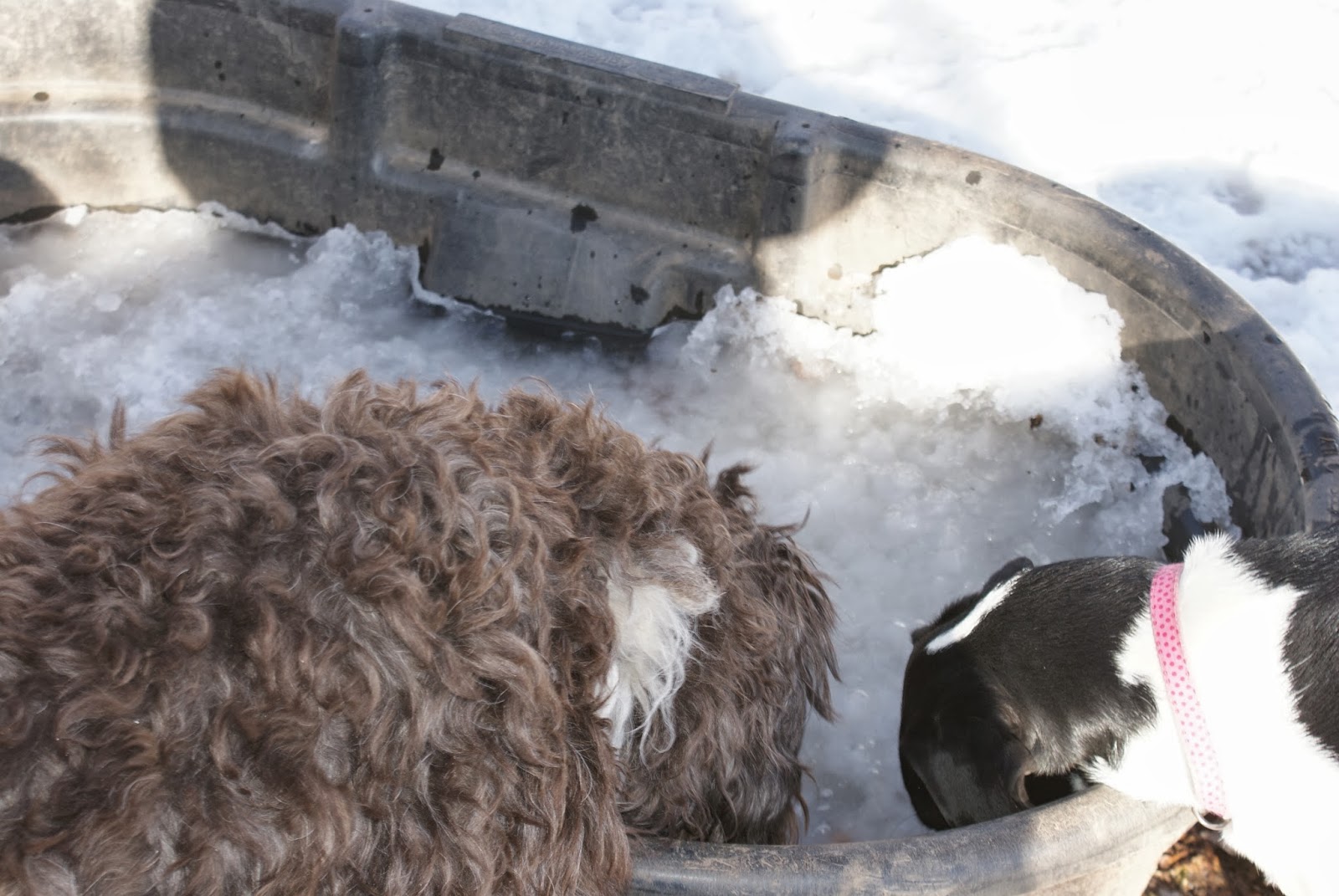 Meantime Sebastian was feeling sleepy from the warmth of the sun. 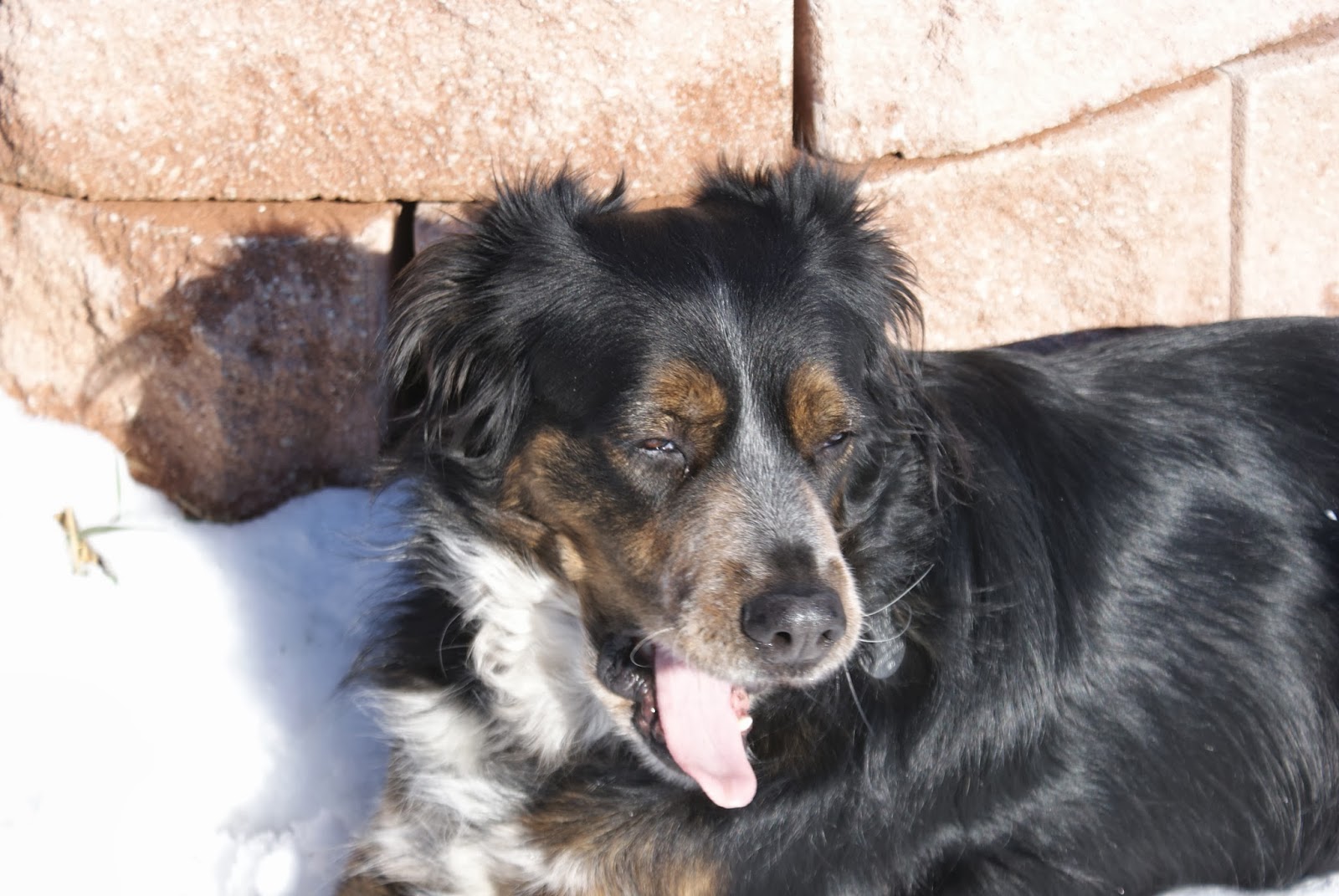 Fudge was enjoying the warm rays, too. 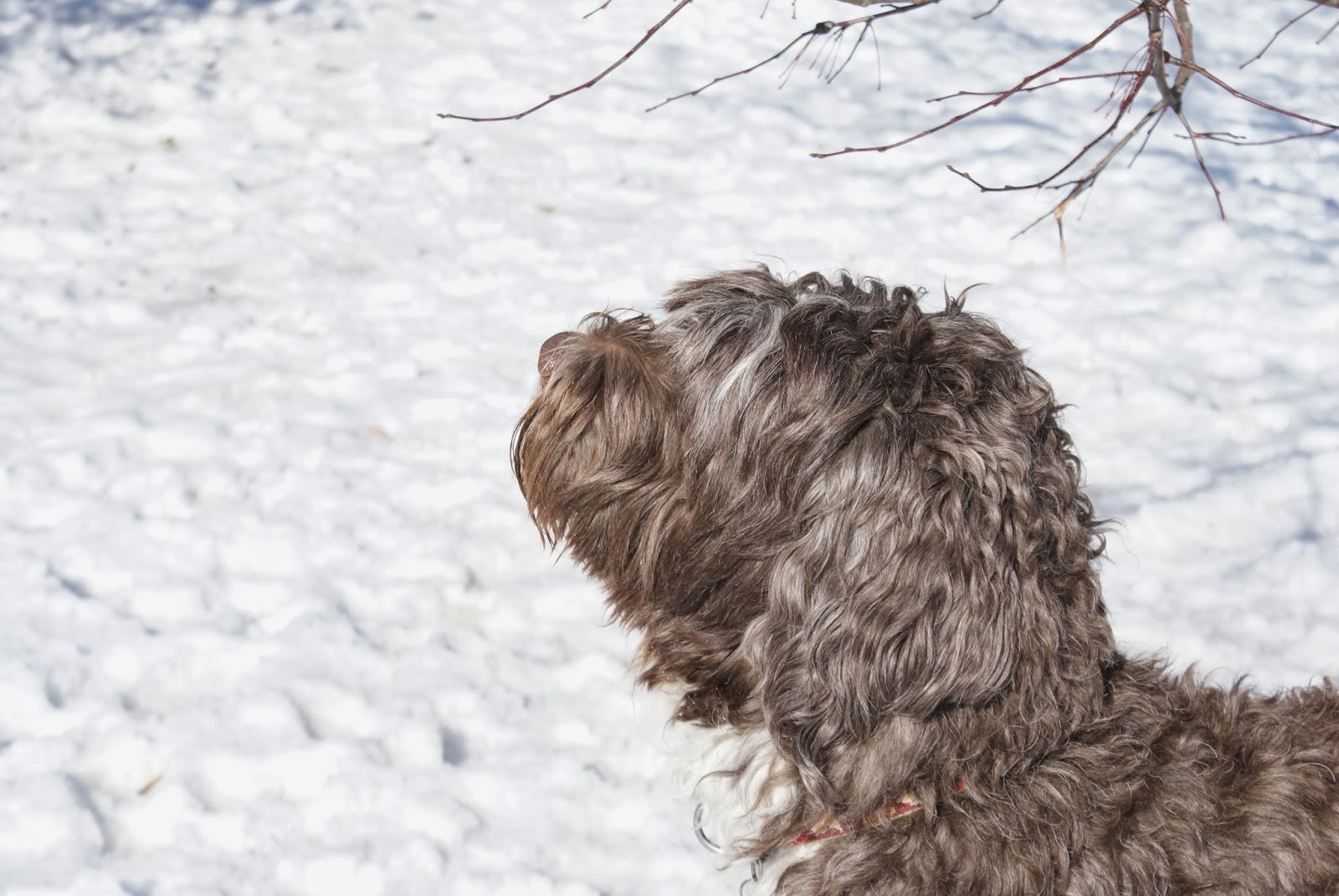 Bailey grabbed one last chunk of ice to bring inside with her. Sebastian decided it was time to go inside for a nap. 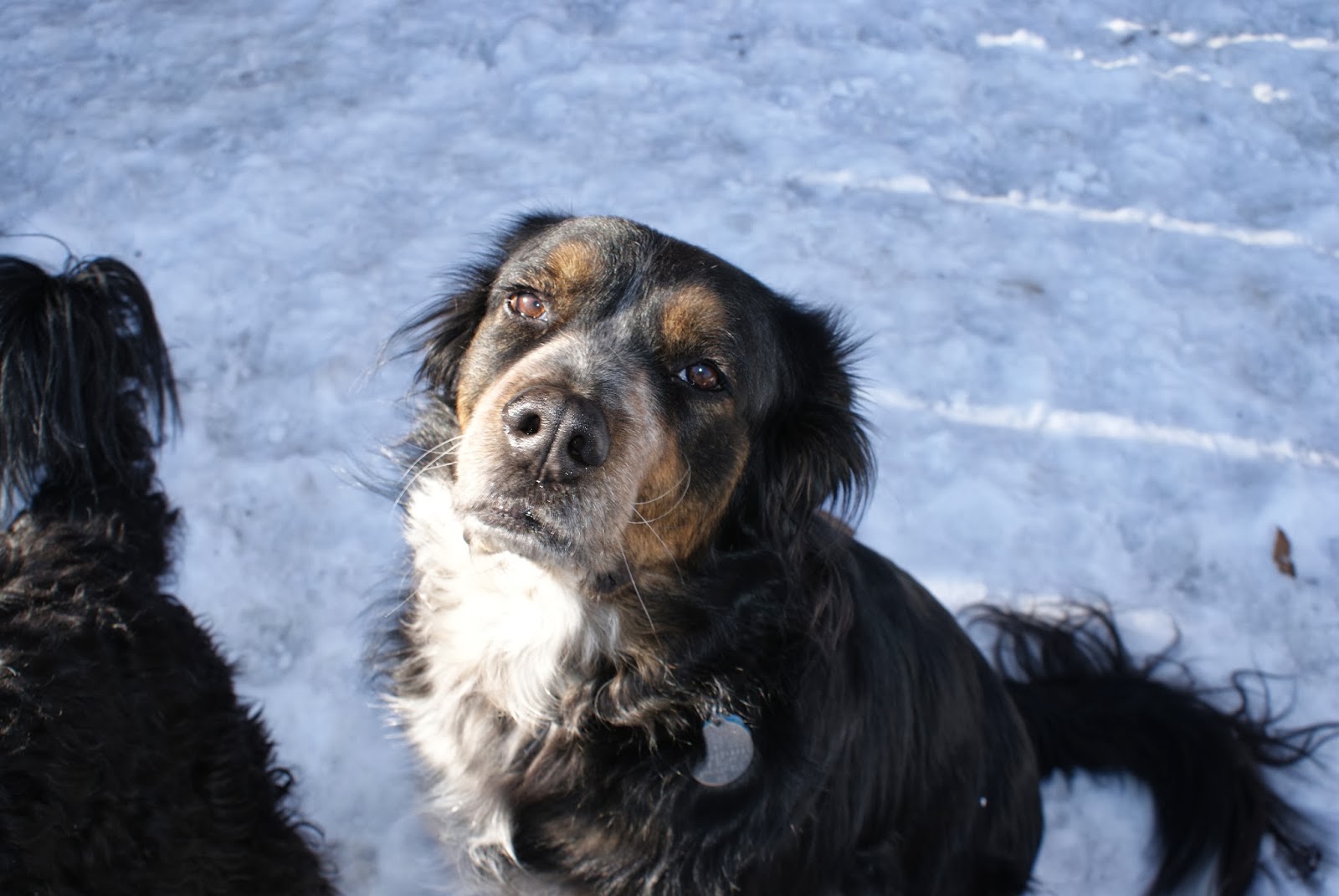 They don't know that another storm is heading our way and they'll get more snow to play in by the end of the week.
Posted by Sue at 2:55 PM

The Vet said 'More Treats'...you have to love that! We'd give him a kiss, too.

Sun and snow/ice, Sebastian would love that. Looks like everyone was having a blast!

Howdy Mates, boy oh boy, we love your snow photos. It looks like so much fun. Over here in our part of Oz we're looking forward to a week of temps ranging from 32C (89F) - 42C (107F). We can tell ya, we wont be looking for sun puddles but could use some of your ice thanks mates hehe. Take care everybuddy. No worries, and love, Stella and Rory
P.S. glad all went well at the Vets!

Hey being a pupper is just awesome, we make the best of the present situation, cause we have know idea whats coming. Glad all gots to enjoy before the next round!

Heh. No wonder your dogs love Dr. B! Congrats to you and to Fudge.

We're still waiting for our snow. We keep getting sleet and freezing rain.

MORE TREATIES??!! Holy COWS!!! Okays, I'm comin' over there so I can see your vettie!!
Wows, that sun and snow looks FABulous!! Eat a piece of ice for me!!
Kisses,
Ruby ♥

We got the same ice on top of snow. Mom was a meanie and wouldn't let us stay outside for long to play but you guys got too! Your mom is a whole lot nicer than ours is!

You are making that snow look like lots of fun. You crack me up when you lay down in that stuff. Brrrr
Lily

More treats sound most wonderful esp when it comes from the vet :D Wonderful pics of everyone out enjoying some snow and sunshine. Hope the storm is not too long tonite.. so they'll get to play outside again tomorrow.
Take care Sue!

Snow is fun, but ice is BLECH! I hope you only get good fun snow in your new storm.

We got 8" of snow on Saturday. Then the plow man came on Sunday. He is just wonderful. Our son and future daughter-in-law are coming from Knoxville on Saturday, and she's very excited about the snow, having always lived in South Carolina.

And man, why can't I get a doctor to tell me to eat more treats without my backside looking like the broad side of a barn?

I love the way your pack invents their own fun. They are so cute!

I could have a really nice afternoon just watching your dogs!! I just love all the interesting things they find to do!! Merry Christmas and Happy New Year! Jeanne, Chloe and LadyBug