It's In The Genes

I've been exceptionally lucky to be able to keep most of my litter of puppies. Not only has it been fun but it's been a great learning process, too. This week I had yet another lesson in genetics. Over the last week I took all the Porties to the vet for annual checkups. Everyone did great but when the blood reports came back we learned that all the girls have low thyroid levels and need a supplement. That means that all Samba's surviving puppies are hypothroid like their mother. Dr B  has suggested that I report this to the breed club.

I've been able to observe these dogs from their first breath straight thru to adulthood. They are a close group and enjoy each other's company. They occasionally have a spat but have never actually gotten nasty with each other, though they can get too rough with other dogs not in their family group. They also form little sub groups or best friends. Lola and Bailey are BFFs and like to go off by themselves to play. Tess and Norma Jean are BFFs as were Noah and Sky. Since Sky's death, Noah and Tess have become close. 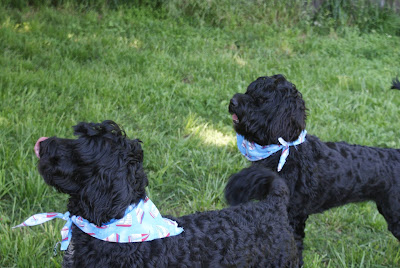 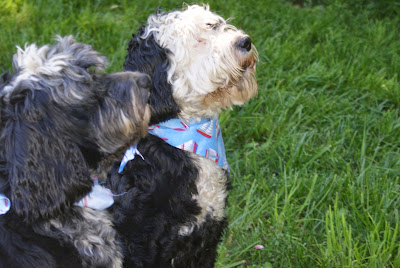 Samba loved to  swim and all but two of her pups inherited her love of the water. Bailey and Sky were not thrilled with water and found other interests. 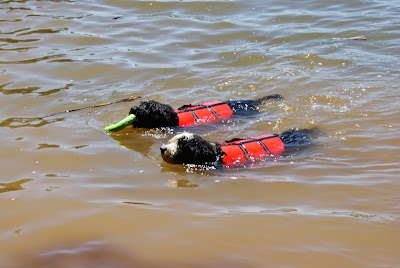 Samba was a great retriever and all but Noah are excellent retrievers. It was Sky's favorite activity and Tess loves it, too. Samba liked to track and hunt and that's Bailey's favorite thing to do. She's good at it and has captured several prizes such as squirrel, rabbit and of course, lizzards. 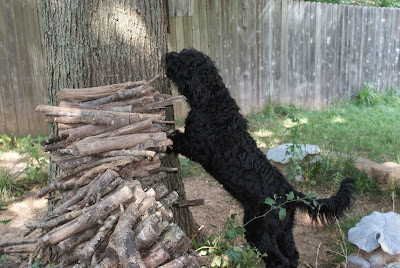 Samba was an insomniac. She liked to get up in the middle of the night to sit on the porch and watch the sky. Of course, she assumed that I wanted to go with her and it became a regular event for us. Noah is also an insomniac. He doesn't beg to go outside to stargaze but I hear him padding around the bedroom at night and when I open my eyes, he's sitting there beside the bed watching me. 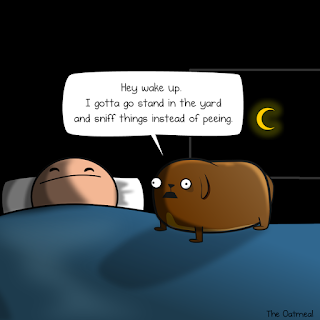 Samba was a world class counter surfer and passed the talent on to all eight of her kids. Fudge used to surf too but stopped after an ugly incident when he scared himself. So their pups inherited the urge from both parents.

Fudge likes water and is a lazy retriever too. He's not much of a hunter and he's a good sleeper but he loves to jump and spin. He's passed those techniques on to all his pups. They all jump, especially Tess and Norma Jean and they all spin. Dinnertime can be very interesting around here. As I'm busy filling their bowls, they're all spinning as fast as they can go. A stranger observing this would think they were in a looney bin and they'd be partially correct.

I'm very grateful that I've had this opportunity to  closely observe a whole litter from start to finish and I think they're all very happy to have spent their lives together. We include Gracie in our group because we're in close touch with her Mom and we see her several times a year. If you ever get the chance to raise a litter of puppies, grab it. It's a lot of work, but it's so rewarding.

You are lucky to be able to observe the pups and see the family traits. Would love to see the spinning dinner time.

Mom would love to raise a litter of pups but her age defies that ever happening. We are all trying to just convince her to get us a new sibling.

We can almost picture all of you spinning for your dinner. haha What a sight to see!

We think that you're a dedicated and wonderful mom. That's a lot of kids to mind and God only knows how costly things can get when you multiply by the number of dogs that need even routine care. You're doing a great job, all the kids are very happy and look it.

Mum said, she takes her hat off to you cos it must be such hard work to make sure everyone is super looked after. You do a fantastic job.
That's what she said.
Luvs Freya Rose Blossom X

It's good to know that all did well with the annual check ups. It's nice that you are able to see a bit of Samba in everyone. Lots of hugs to the pups from all of us!
Love,
Piappies Fudgie, Princess, Frappie, Mocha, Sugar, Wai-Max, Wai-Pai & Forgie

Truly a unique and amazing experience, I bet!

I'm glad everyone is finally doing well! I would have never intentionally chosen to raise a litter, but it sorta happened. Two of the pups went to fine homes, but I couldn't part with the other two (truthfully it killed me to see the other two go!) so ended up with two pups and their mommy. However it has been an awesome experience seeing the dynamics of the 'pack'. Wouldn't trade that experience for the world. My three girls are a joy (most of the time) and they have a blast together. Their mommy still makes them stand still for face washes even though they are four years old.

I can imagine the interesting insights you have since you had both the mom, dad and pups!