Oh, My Aching Back!!

Bailey's back hurts. It hurts a lot. 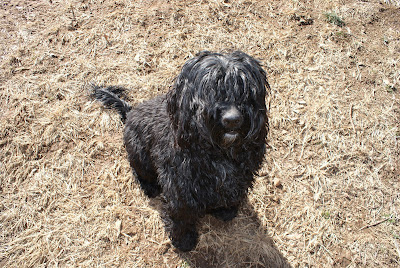 He came in and said there was something wrong with Bailey, so we put everyone else inside and examined her. I checked her back legs and feet but didn't find anything wrong. She just wanted to lie down so we started walking her back to the house when Rob ran his hands along her sides. When he got to a certain place, she collapsed. We put her in her crate and called the vet. 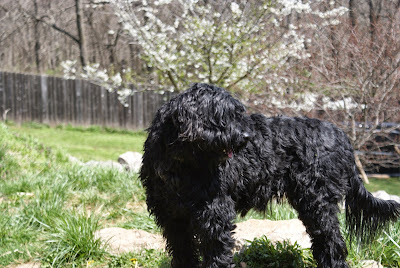 This morning we took her in to see Dr B. He said he wanted to start at the nose and work back to the tail, but when he got to that spot in her back, she again dropped . He checked her legs for strength and balance, they were OK. He took her temperature and she was running a fever of 103.5 degrees.

So, for now we're hoping that she has an infection that has settled in her back. We're treating her with a strong antibiotic, a muscle relaxer and pain pills. She has to rest except for outings on leash to relieve herself. He told me certain things to watch for and if she's not better by Monday night, she'll have xrays on Tuesday. 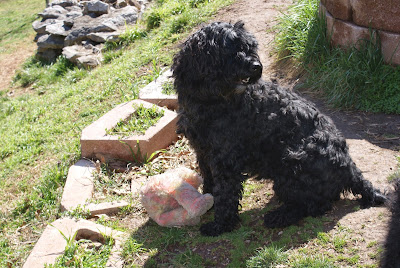 She's being a very good patient. She just wants to stay in her crate and sleep. When I looked in on her a few minutes ago, she was asleep with her leg across her teddy bear. She looks so sweet.
Posted by Sue at 3:40 PM

Poor Bailey - hope the rest and meds help. All paws crossed for her to be much better quickly.

Poor baby, back pain is the absolute worst! Paws crossed that she feels better soon

We'll keep our paws crossed that the meds do the job.

I have chronic back pain, too; I sympathize with the poor girl. I'm glad Bailey has her teddy bear to keep her company.

We're hopeful that Bailey will be back, good as new by Monday.

We have all our paws crossed for a quick and easy full recovery. Get lots of rest this weekend.

OH NOES! Gurl, I sure hopes you gets better on the antibiotics!!! (I'm on some too, butts just for a skin infection..nothin' serious) I was gonna send you some margaritas to help, butts I don't thinks you should mix them with those muscle relaxers...☺
Sendin' you LOTS of healin' vibes and tons of AireZens!
Kisses,
Ruby ♥

We hope your back feels better soon, Bailey. We're sending you lots and lots of AireZen!

Back pain is horrible. I hope she's feeling better already. Both of my girls had minor back issues this spring and recovered quickly with rest. Gretchen required an extra bit of activity restriction to get there, but she IS carrying extra weight... :(

We're crossing paws for you, Bailey!

Oh no... I'm just seeing this now and sending lots of good vibes for Bailey. Is she better today?

Oh no. Poor baby. We are sending prayers