Getting Old Is A Bitch!

Sometimes I'm torn as to what I want. On Wednesday Morgan spent the morning with Dr B. She had a bile acids test to see how well her liver is working. If the test results were abnormal it meant her that her liver function was getting worse and she was probably getting a buildup of ammonia in her brain. I don't want her liver disease to be worse, but on the other hand, it would explain almost all of her symptoms and we could treat the condition with an antibiotic to reduce the ammonia level. So what did I want to hear? When I looked up the condition we were expecting, hepatic encephalopathy, Morgan had eight of ten symptoms so I was prepared for the diagnosis. 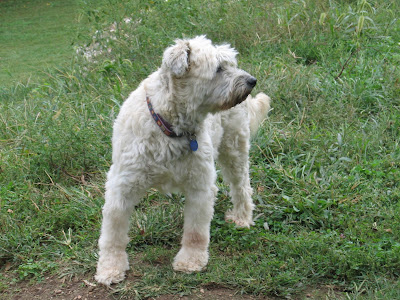 This morning the results were in and they were not what we expected. Her liver is functioning well. That's good but it also means that her ammonia levels in the brain are probably within accepted levels. So what are we dealing with?

Canine cognitative disfunction   or doggie alzheimers. Most of the symptoms are the same but there is no really good treatment. Dr B and I discussed her diet and that isn't going to be easy to address. Morgan doesn't like to eat the same thing two days in a row, making it a challenge to come up with something that she is interested in. Often she'll take a mouthful, then wander off.  I've been hand feeding her most of the time so that I know she's getting enough calories. The only thing she consistently likes is her milkshake, so we're doing that twice a day now. I'm also going to try to feed her fish more often since fish is a brainfood.

We're adding a couple of supplements to her daily routine, l-carnitine and alpha lipoic acid. We'll increase her fish oil capsules from six to eight and continue her sam-e.  Dr B says it may be two to three weeks before we notice any significant changes in her behavior. Till then we'll continue adjusting our routines to keep her happy and safe. 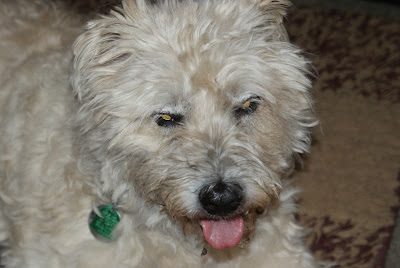 Having her with us makes all the fuss worth it.
Posted by Sue at 3:53 PM

Yep, getting old is no fun, or so says the Momster. We are happy that Morgan's liver is good, but we hope you can find something to keep her going a while longer and keep you sane at the same time:) Mom says, you are so right, she is definitely worth all the fuss.

Ruby and her mom

Happy and safe, that's what counts. We're happy it isn't the liver....you can live with senility.

You are a challenge, Morgan, but we know your mom wouldn't want it any other way!

She looks good out there on the lawn! Confusion isn't as bad as illness, so that's a plus.

Oh Miss Morgan... yes, getting old is a bitch. Thankfully you have the best Mama possible to assist you in these golden years. <3

Sometimes it's a relief to find out even that it's a bad disease just because you have something you can treat! We'll keep our paws crossed for Morgan that she does well.