Wow, we haven't been around here much and we don't really have a good reason. I've been a bit lazy and I've spent most of my time with my fur kids. Some of them need some extra attention. Fudge is heading into the home stretch with his recovery. The vet said that we'd see improvement for about six weeks and where we are at the six week mark is probably where we'll stay. The news is pretty good. The boy gets around as if nothing ever happened. He runs and jumps and is generally annoying again. His left knee seems to be a bit stiff and we sometimes see it when he walks, especially if he's tired. Then he has a slight limp. He still can't scratch that ear and isn't happy about it, but we're happy with his progress. 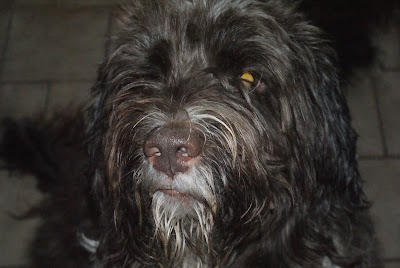 Sebastian had a vomiting problem over the 4th of July. Dr B was out of town but the other doc thought it was a stress ulcer. At first he responded to the treatment but within a couple weeks he was vomiting again. It would usually happen in the morning about three or four days a week. I spoke with Dr B and he wanted to see him.

When Sebastian first came to live with us, we did some blood  tests and they showed a possibility of pancreatitis. Since that time we've tried to help him lose weight and were very careful about his diet. When Dr B examined him, he didn't exhibit any pain in the area of the pancreas, but vomiting is a symptom, so we decided once and for all to see if he actually had pancreatitis. There's a specific blood test, so we did it, then waited for results. 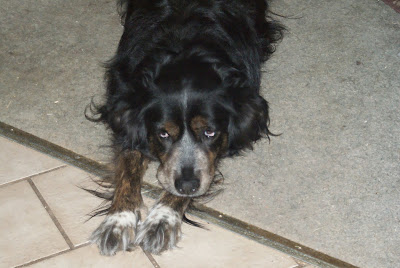 The test showed that Sebastian does not have pancreatitis. He does have something going on, so he's now eating a homemade diet and taking Reglan three times a day for nausea. Rob and I both noticed that after only two days Sebastian was happier. Not only was he not vomiting, but he had extra energy and was running and playing with the other dogs. He loves his dinner and dances around while I'm preparing it. I guess he was feeling nauseous most of the time and it's hard to be happy under those conditions.

Miss Morgan is getting a lot of our attention these days. This morning we sat down and discussed her current state. We know that she's slowly slipping away from us. She sleeps hard during the day and then paces a lot during the night. Rob and I are taking turns sleeping on the couch, so she can pace without disturbing everyone else. She isn't eating enough, though I try everything I can think of to encourage her. Most days I sit on the floor and hand feed her a piece of kibble at a time and hope we get thru the whole bowl. She does remember each night at 8:30 that she gets her milkshake. She appears in front of me and leads me to the refrigerator. 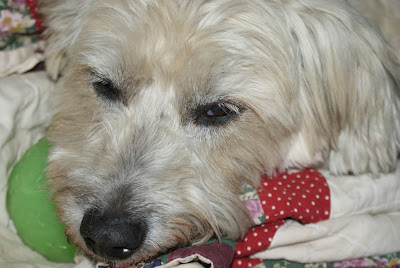 She's very frail and shaky on her feet. We help her up and down stairs and sometimes carry her. But, it isn't time to act yet. She still is aware and isn't in any pain, so we'll just enjoy whatever time we have left together. I check often when she's sleeping to see if she's still breathing and I expect one of these mornings that she won't be.  After almost sixteen years, it's hard to think about not having Miss Morgan around demanding this or that.

My priorities just now are caring for my  pups and treasuring my time with them. Everything else is secondary.

I have been worried about you. I'm glad to hear that Fudge is doing so well, and that Sebastian is doing better. Miss Morgan is a fine old lady, and has had a wonderful life. I know you will miss her, and that every day with her is special. Ear scratches and belly rubs to all of the pack from their friend in NEPA.

Miss Morgan looks so much like our angel Gemini in that picture, crazy! Please spend all the time you need with your pups. Time is all you have. Enjoy it. We are thinking of you.

Thanks for the update. Good news on Fudge and Sebastian. And you are doing what is best for Morgan - we know all about how hard it gets when they hit 16 and aren't quite ready but are still struggling. You have your priorities straight - we would never have thought you would do anything but. All paws crossed for some more good days with sweet Morgan.

Woos - Ciara and Lightning and Mom

Glad to hear that Fudge and Sebastian are holding their own. But our prayers go to Sweet Morgan right now. Miracles do happen and she may bounce right back after a good rest.

Sounds like things are humming along. Good news on the Fudge and Sebastian front. We think you're right to enjoy your time with Morgan. Still wanting the Milkshake and not in pain.....all good.

I am so glad that all is going well for your pups, and I'm totally with you on your precious Morgan. Continued good vibes coming from my corner of VA!

Yea Fudge and Sebastian...keep up the good work Fudge, and Sebastian, I will have my paws crossed that you feel betters real soon!
Morgan, my Sista, I am sendin' you {{{hugs}}} and slobbery kisses...you keep wantin' those milkshakes and your peeps scritches. Oh, and NEVER stop bein' demandin'! BOL!! That's just the way we roll!
Kisses,
Ruby ♥

Hey Morgan, it's me, Ruby...We old ladies must stick together. I vomit a lot and sleep veFudge and Sebastian from me.

You take all the time you need to take care of your pups, especially Miss Morgan. Making the most of all your time with her is the most important thing by FAR.

Enjoy every single moment that you can......... My thoughts are with you and Miss Morgan. <3

Zodiac is showing so much age as well. But he eats and goes outside and seems happy. He sleeps a lot and doesn't see or hear as well and we help him with the stairs sometimes. I worry about him, but he seems ok, just old.

Sending you lots of Golden hugs and love. Golden WOofs

The Piappies all send positive vibes and lots of hugs to Fudge, Sebastian and most especially, Miss Morgan. Enjoy each day with them and the whole pack.

You have your priorities straight!! I do hope Miss Morgan just fades away in her sleep; isn't that the wish we have for all pets? But it is pure joy to hear that Fudge is basically back to normal!!