We've been aware since last summer that there was a new and deadly strain of dog flu in the country. The outbreak started in Chicago and is a mutation of the avian influenza virus. It's called CIV H3N2. As with any flu, it's most serious among the very young, the very old and those with other health issues.

When I first heard about this outbreak, I checked with Dr B. I was most worried about Morgan as she was old and had other health problems that we were aware of. He told me that there were no reported cases in Missouri at that time but we agreed to give Morgan the vaccine anyway because of her condition. He said he would let me know as soon as he heard of the flu coming to Missouri and we could vaccinate everyone at that time.

Well, you guessed it, it has arrived! Though there are a number of cases statewide, so far there is only one diagnosed case here in Springfield. We're not waiting. My dogs are getting their flu shots. Seven of my dogs are now seniors and although Sebastian, Sydney and Mac aren't in a high risk group, they're also getting the vaccine.

This is a nasty flu, responsible for a number of canine deaths across the country. Dogs exposed to other dogs in kennels, shelters, dog shows, etc are most at risk, but pets can also come in contact with sick dogs during the course of a normal day. How many of us know if our neighbors give their dogs good veterinary care and if their vaccines are up to date? 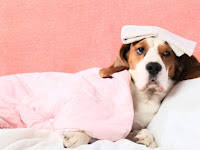 The clinical signs are familiar, coughing, sneezing, lethargy, fever and discharge from the nose and or eyes. Pretty much the same symptoms we would have with the flu. Remember how awful you felt last time you had it?

Check with you vet, especially if you're planning to board or leave you dog at  the groomer's. This is an easy, relatively inexpensive way to protect your fur kids from what could be a serious illness.
Posted by Sue at 2:49 PM

Of course you have to vaccinate all of them; we tell all of the kids to get flu shots before they come home for Thanksgiving, or don't come: we can't risk them infecting their father. So far, they have; I guess they understand the theory of herd immunity. Fingers crossed that Canine Flu stays far away from the Portie Pack.

So far it hasn't reached here, but we know that many people don't vaccinate their dogs. We're all up to date. We hope the virus stays away from you.

We have been monitoring it here too. We don't have any boarding plans soon, but maybe a trip to the groomer if Mom can get Ciara's seizures settled down. Our vet is prepared to give us that vaccine too.

Thanks for the "booster" update!

The influenza is so scary. We heard it was around here and really bad in Chicago
Lily & Edward

I'm going to have to email you to talk about this more... curious to know more about what your vet said. I want to be proactive too! :)