Oy vey, what a week!! Last week Fudge and Lola visited the vet. Fudge told you about his diagnosis, but I was pretty concerned about Lola, too. She's lost  a bit of weight and looks too thin to me and she's drinking a lot more water than I feel is normal. It was almost time for her checkup anyway, so we opted for a senior exam and bloodwork, plus a urinalysis. My concern was either Cushings Disease or Diabetes. Dr B agreed and checked for both. He also agreed that she's a bit on the thin side but we decided to wait for the blood report to come back before doing anything else. 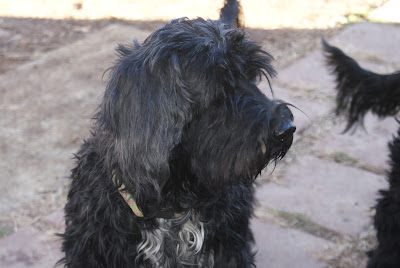 On Friday the reports were back and we were pleased. Her thyroid was a little high, which may explain the weight loss. She's already on thyroid meds, so we just made a slight adjustment and will recheck in a month. Her urine was perfect and although one liver value was slightly elevated, it wasn't high enough to be of concern. We'll recheck that in a month, too. He said there was no muscle wastage as he would expect to see with diabetes and nothing in her labs indicated it, so for now we're thinking she's just thirsty or feeling a little stressed.

A couple weeks ago Fudge and Noah started showing way too much interest in Norma Jean. She's been spayed, but the boys were constantly following her around. I questioned Dr B about it and he suggested having a urinalysis done as she might have an infection that was giving off a scent that attracted the boys. We actually did two as the first was inconclusive and the second was perfect. His second thoughts were that there might be a hormonal issue and we'd need to do a blood test. 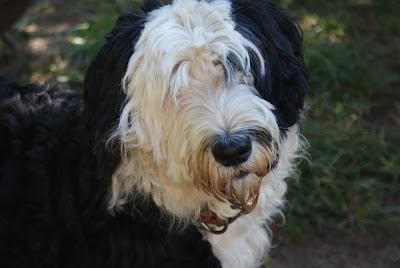 Rob gave her a bath on Monday night and discovered an angry looking bump on her rump. When we took her to the vet the next morning, he was pretty sure that it was the attraction that the boys were following. It was ulcerated and starting to ooze a little. This morning she had it removed and now she has a big bald area on her back end. We're telling everyone that she had a butt lift. 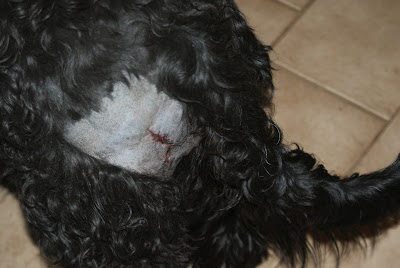 After more discussion on Fudge's 'stud tail' situation, we decided to go ahead and have him neutered and have the bump on the tail removed. My thinking is that he's now eleven years old and I don't want to put him under general anesthesia when he's older, so this is the time to get it done. He's scheduled for surgery on April 1st. 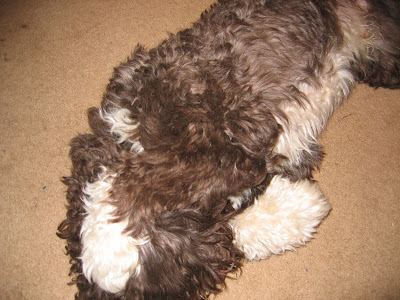 There are several other time consuming issues that I had to deal with this week, but now they're all resolved, so maybe the weekend will be somewhat relaxing. Let's hope so.

Glad everyone's well now. That bump on Lola was a quick job...nice to see her healing. Guess it'll be April Fudge's Day soon. Hope that's the end of the Vet visits for awhile!

Glad to hear you found that bump on Lola - hope it heals well. Ciara's thyroid level is still messed up. We had another blood draw today to see if the latest increase in meds has helped. Her weight is totally going the wrong way. And now we have to keep our paws crossed that her visit to the vet today doesn't set off a seizure:(

Have a relaxing weekend - probably going to be a rainy one.

Hard to remember that Fudge is 11 years old. He just acts so ageless. I'm glad you got the girls' situations under control so easily. Have a nice weekend; I hope it doesn't monsoon on you.

Oh dear - you do have a lot going on this week! I'm glad Norma Jean's surgery went well and maybe now the boys will stop following her! Let me know how Fudge does - I'll send prayers for your pack. g

There is certainly never a dull moment at your house!

Wasn't it good of the boys to let you know about Norma Jean's bumpie? We know things!! Fudge, you'll feel like a new man soon!