Sebastian is a very easy dog. He makes few demands. He's never had an accident in the house, will eat whatever I give him and follows the others to the yard or to bed. His one vice is rolling in the dirt. 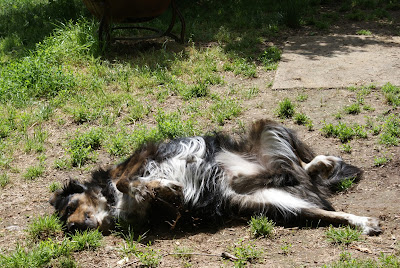 Sebastian has a sensitive tummy and we have to be careful what he eats. We thought at first it was pancreatitis, but the test was negative. We've been treating it as irritable bowel and for several months he ate a special diet of rice and pork and sweet potato. Last July we weaned him back on to kibble and he eats that mixed with my special home cooked food. He's been doing well.

Occasionally he'll refuse his breakfast and spend the morning in a dark corner of the dining room away from the rest of the pack. I just thought perhaps his tummy was upset. Then last week I realized what was actually going on.

One morning last week Sebastian refused breakfast. He also refused his morning yogurt and his cookie. He spent the morning in his dark corner with his head against the wall. At one point I called him and when he came to me, he was holding his head very low. I looked at him closely and he was squinting. I told him he was a good boy, but got no tail wag in response. I gave him something for nausea and he went back to the dark corner. 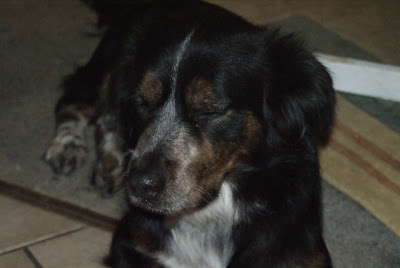 Suddenly it occurred to me that he had a headache, and not just a normal headache. Sebastian had a migraine.

I've had migraines since I was ten years old and know exactly how he was feeling. He felt nauseous and light and sound made his headache worse. Getting in a dark corner and pushing his head against the wall probably helped.

I told Dr B what I suspected and he didn't laugh at me. He wanted to know exactly what the symptoms were. Then he agreed that it probably was a headache and when it happens I should give him a Rimadyl for the pain.

A couple days after his headache, he indulged himself in a nice long roll in the dirt. He shakes the dirt  off his body before coming inside, but sometimes he's too enthusiastic when he rolls and he rubs his head in the dirt. Three times recently he's gotten dirt in his eyes and they've gotten red and swollen. Each time we have to use medicated eyedrops for a few days till they go back to normal. I'm really worried that one of these days he'll get a stick or stone in his eye and do real damage. He could easily lose his eye.

So, I decided to try some heavy duty prevention. I ordered a pair of sunglasses for him. My idea was that he'd get used to wearing them in a short time and they'd protect his eyes when he rolls. It sounded good, but didn't work the way I'd hoped.

When the glasses came, (I didn't have a color choice), he was pretty good about letting me put them on him and adjust the straps. 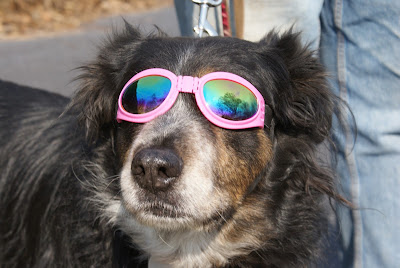 We walked around a bit and it was funny watching him discover that he could see with these things on his head. 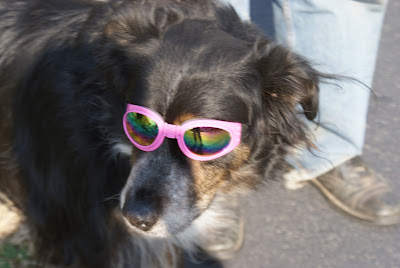 He can even look for cats. 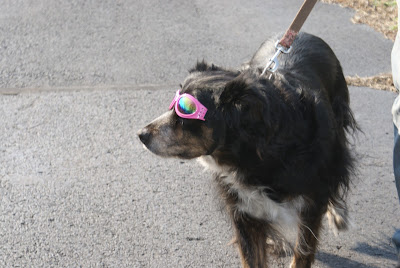 Then he realized that he could easily, too easily adjust them. This is how he prefers to wear his sunglasses, just like any cool young dude. 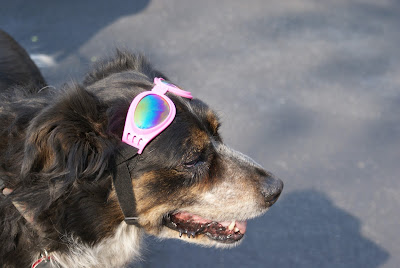 The glasses won't protect his eyes when he rolls, so now I slip a cone on his head before he goes out the door and he can roll as much as he likes without dirt getting in his eyes. 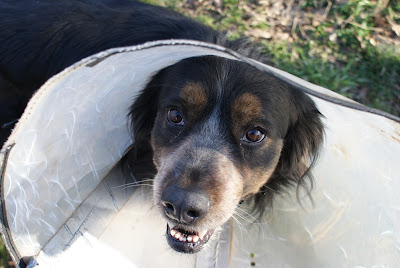 He'll still wear his glasses when we go for walks, just because he looks so cute. 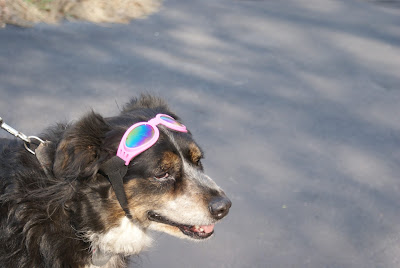 Very interesting. Mom is pretty sure Phantom had migraines and as you may remember, he had a lot of tummy upset too. The times that she thought he might have a headache, his eyes were always dull and not wide open. Very good observation, Sue. Love the doggles.

Your mom takes such good care of you, Sebastian. You really are one cool dude in your sunglasses!

Must admit, never thought of a dog getting a headache, but it does make sense. Hope they don't last long.

Very snazzy sunglasses! You know, the next time you have a migraine, your momma could try putting those on and it might help with the light sensitivity.

Oh Sebastian... you are always giving your Mom a heart attack! You silly dude... but you do look mighty cool with those shades!

He looks like a pilot! We never thought of dogs having headaches...much less migraines! But rolling in the dirt is fun, glad you BOTH can now relax and enjoy it!

You are one cool dude. I was born with a sensitive stomach. And I'm 9. One year ago our petsitter gave mom a chicken recipe. Since mom started cooking for me, she swore she never would, I haven't had a soft stool since. Nutty
Lily (& Edward)

I love Sebastian! He rocks those shades! Jeff put his sunglasses on Bebop once, and ol' Bop just stood around grinning. some dogs will do anything for their people. I'm glad you figured out Sebastian's migraines!