There's another reason we haven't been blogging for a couple weeks and it's a biggie. Fudge has been sick and I mean really sick. 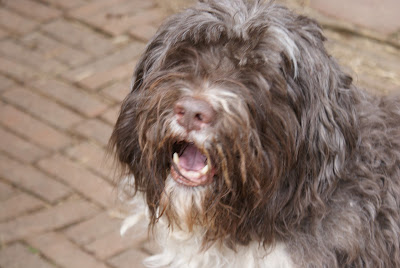 It started two weeks ago in the middle of the night, of course. Fudge was restless. Then he peed in the house, something he never does. I cleaned up and took him outside but when we went back to bed, he continued to pant heavily and pace around the room.

I took him out again and he tried to pee, but nothing happened. A couple hours later I decided to take all the dogs to the back yard. As he ran thru the garage to the back door, Fudge was peeing and when I started to clean up, I saw that there was blood. A lot of blood.

As soon as the clinic opened I called Dr B. He wanted a sample of Fudge's first pee the next morning and wanted me to catch it in a baggie so that it didn't get contaminated. He wanted to send it off to the lab for a culture. That day Fudge had several accidents in the house. He'd start running for the door, but couldn't make it in time. He was getting very upset.

The next morning Fudge woke at 4AM. I wrapped a towel around him to get him to the door and grabbed the baggie. It was dark and it was raining and lightning was flashing all around. I wanted to catch some pee in the bag but I wasn't very hopeful.

I caught a little but when we got to the clinic, they said it was just enough. They sent it to the lab and we had to wait four days for the results. Fudge was having a really bad time. Rob and I took him outside every hour day and night, but even then we had to wrap him with a towel to get him to the door. Once he peed on the porch and hid behind the chair. I tried to be reassuring but he hated what was happening.

On Tuesday morning Dr B called, the results were in. Fudge has a urinary tract infection caused by e-coli. Yikes! To say I was upset is a real understatement. I had flashbacks to news reports of people dying of e-coli after eating a hamburger. How did he get this, what were his chances and what did it mean for the other dogs? 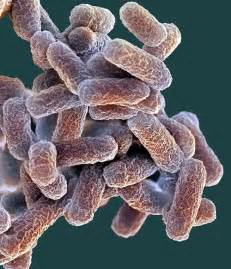 Dr B knows me too well and he knew exactly the thoughts that would start going thru my head. He was ready with answers. There are many strains of e-coli, some deadly, some less so. Some are drug resistant, some respond well to drugs.

Fudge has the least deadly type of e-coli and it responds to a number of different antibiotics. He said it didn't come from eating bad meat or drinking bad water, it's just an overgrowth of the normal e-coli in his body. The other dogs should all be OK as they also all have normal e-coli in their bodies.

We started Fudge on antibiotics immediately. Because he has a very high bacteria count in his urine, he'll need to take them for a  full two weeks. After two days on the antibiotics he was able to control his urination again and we don't have to rush to the door every hour. We're still making sue he goes out every couple hours during the day and last thing at night. He's now able to sleep thru the night and I don't have to keep a towel handy to wrap around him. He's much happier. At the end of his antibiotics, we'll retest to make sure the infection is gone.

Then, suddenly one morning Bailey started vomiting. After the vomiting stopped, she developed diarrhea. I was busy caring for her when suddenly Lola started vomiting. Next she also had diarrhea. I called the vet and asked if this was related to Fudge's problem but he thought it was something entirely different and told me how to handle it with medication and special diets. Two days later, just as the two girls were starting to feel better, it was Noah's turn. I put him on the same special diet and finally after a week of vomit and messy poops, they all seem to be on the mend. 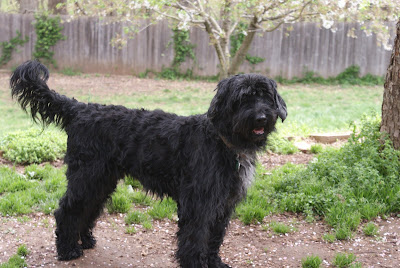 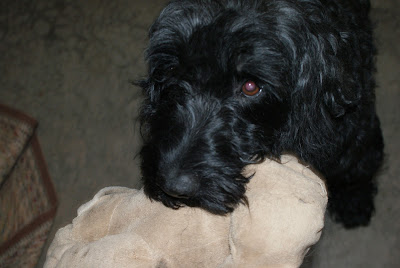 Who knows what happened. Maybe they ate something they shouldn't have, maybe it's just the stress of constant thunder and lightning for two weeks. Maybe it's something else altogether.

Don't dismiss the effects of stress. I haven't had a full night's sleep in two weeks. I know I'm not thinking as clearly as normal. I know my appetite is way off and that my temper can flare up quickly. Stress can do lots of damage. We're all hoping for a night without thunder soon. It would make us all feel better.

Fudge is doing a little better each day, but a little Power of the Paw sure wouldn't hurt.

Power of the paw, 4 paws! Wishing you the best. Take care all of you, furry or otherwise. With love, Mel & Bronson.

We think stress from all those storms is a very likely cause! It can be ruff!

So sorry to read this. We hope rather round of sickies is done now. POTP for all.

Oh my goodness how scary. Hope all those medicines work. All our feets are crossed for you
Lily & Edward

Oh Sue, I'm so sorry about all that has happened with your pups! I am glad to read that they are all feeling better, and we will of course send lots of POTP for your household that it continues, and for you too that you get your rest!


PS: Just something for you to tuck into your memory ... We've had a few senior boys that have had problems with incontinence. You can buy "male wraps" that help with the accidents. They're washable, and I tuck a diaper or a "pad" to help soak up urine. They're available in all sizes from Todd to George at 100 lbs.


PSS... Again, take care, and know that you are all loved and thought of! ❤

Oh my goodness! You have all had your share of issues! We are sending you and Mr Rob and your canine family lots of AireZen and POTP, Miss Sue!

You've got our POTP! And we'll keep paws and fingers crossed. Poor Fudge. Glad it was NOT the worst kind, hope the antibiotics do the trick. And the girls. Seems when it rains it POURS. We hope the thunder eases soon, so everyone can recover.

I am glad everyone is doing better Don't discount stress for the vomiting and diarrhea.

OH NOES!!!!!! Oh my FAVorite pack ~ you can't be sick!!! Oh Fudge, I knows abouts not wanting your mess where it shouldn't be, I don't likes it either, and I hide and feel guilty too when it happens. Butts, it's okay, cause our Moms knows it can't be helped and are just worried abouts us, not the mess. I'm glads it's gettin' betters, and I am sendin' tons of POTP and healin' vibes and margaritas....oh, maybe not those..not til you gets all better ☺.
Oh gurls and Noah, you knows I am sendin' lots of healin' vibes and POTP your way too! Boy, you guys are tough cookies! {{{hugs}}}}
Kisses,
Ruby ♥
pees: almost forgots the AireZens!!!! ☺