In this case the old dog is me. It's been an interesting couple weeks and I've been forced to slow down and get organized. Fudge is confined to the living room during the day and because he wants to follow me wherever I go, I am also confined to the living room. Rob doggie sits him while I do the essentials on the computer because my office is in the basement and Fudge isn't allowed to do stairs. 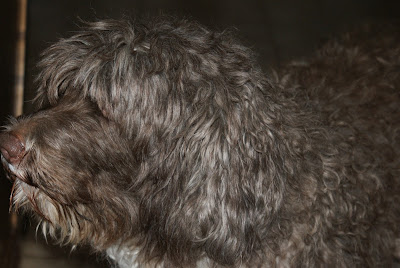 Fudge is actually doing better. He has a very bad limp that I'm guessing is permanent, but he is able to get around better than two weeks ago. I do notice a clicking sound in his leg when he walks and I don't thank that's a good thing, but he doesn't seem bothered by it. He's on leash at all times except for bedtime, then the door is closed so that he's stuck in the bedroom and can't roam. His appetite has improved and although he groans when he gets up and down, I don't think he's in much pain now.

Noah's colitis has been bothering him again. I can't seem to get his poop problems cleared up. Just when he seems better and I think we've got a handle on it, it flares back up. Taking a cue from a Blogville friend, we located a lady nearby who raises dairy goats and sells their milk. We bought a gallon and tried it on Noah's dinner. For several days we thought it was working well, then another poop explosion happened. We decided to give it a longer try and yesterday we went back to the farm and spoke with the goat lady. She suggested making Kefir. 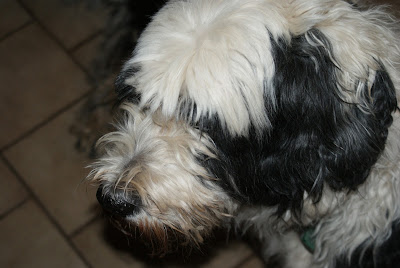 OK, I knew that Kefir was fermented goat's milk, but that's all I knew. So this old dog hit the internet last night and now I'll be making my first batch of Kefir next week, as soon as my supplies arrive. Apparently Kefir from goat's milk is high in probiotics, vitamins, antioxidants and everything else that's good for you. 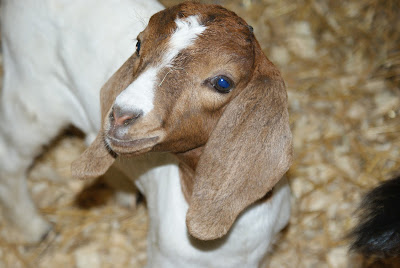 In the meantime I'm giving raw goat's milk to Fudge for his joints, Sebastian and Lola for their digestion, Noah for colitis and the others for their pure enjoyment. Such a happy group at dinnertime.

The weather here has been funky, hot during the day and actually cold at night. I decided that Sebastian might like a sweater for his evening outings, so I looked up some patterns. Trouble is that it's mostly little dogs that wear sweaters and most designers only have patterns for dogs much smaller than Sebastian. So this old dog picked a pattern that I like and I'm improvising as I knit. If it doesn't fit him, it should fit one of the others. If it doesn't fit anyone, I'll just unravel the whole thing and start over. It's a way to spend the time while sitting with Fudge. 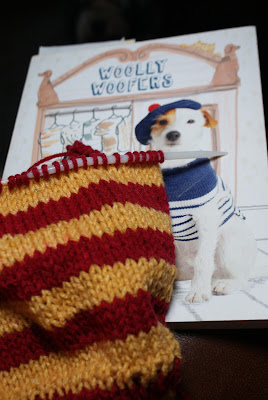 It's hard to confine dogs. Sounds like you've worked out a system! Hope the kefir works. And we think Sebastian needs a beret...like the picture...BOL!

It sounds as if kiefer might be good for us human old dogs, too! Is Sebastian a USC fan??

-Otto and Osa and their mom

We hope you continue to improve, Fudge, and we hope the kefir does the trick for you, Noah. We can't wait to see your dog sweater all finished and you wearing it, Sebastian!

I'm sure Sebastian will love your sweater. I think Bebop needs a coat, because he gets cold, too, but he's so beefy that nothing fits him. I hope your kefir works for Noah, but I'm glad he and Fudge are enjoying their goat's milk.