Maybe you've noticed that we haven't been around much lately. There's a reason for that. Something is wrong with Mr. Fudge and it's had us pretty worried. 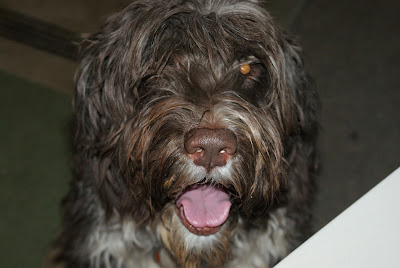 Fudge has always been a wild and crazy guy with his spinning and jumping and his anything for attention attitude. Then two years ago a stroke left him with a spinal injury, a weakness in his left rear leg and his spinning and jumping capacity diminished. Still, it didn't completely tame the boy, he continued to find new ways to show off. Instead of spinning down the stairs on the way to the back yard, he started running down backwards.

One day his weak back leg slipped and he fell down the stairs. It was not a pretty landing and when I helped him up, he seemed shaken. It didn't last long, he continued running around the yard and generally being silly. I soon put the misadventure out of my mind.

Then a couple weeks ago Fudge started limping on his right front leg. It was just a mild limp at first and when I examined the leg and foot, I didn't see anything amiss. But the limp continued and started getting worse. Last week he was limping badly and carrying his front leg at a strange angle and his foot was turned inward. There was a lot of swelling in the carpus region. 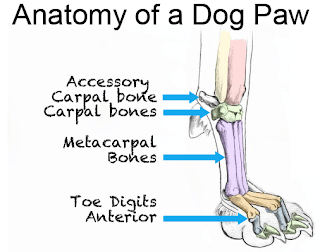 I did what I do and asked Google what could be happening and I did not like the answer. The result that kept coming up was osteosarcoma. We've recently watched a friend go thru that with her beloved dog and it's a terrible disease with a very poor prognosis. Fudge seemed to fit the symptoms perfectly, so Rob and I began steeling ourselves for the inevitable. There was another possibility though, it could be a torn carpal ligament. I remembered the fall and wondered it it was responsible for the limp.

On Saturday morning we took a very sad Fudge to visit Dr B. We had to lift him in and out of the car which he did not appreciate. When Dr B came into the exam room he sat down and watched Fudge move for a few minutes. Then he examined the leg. He started feeling around the swollen area and applying pressure, a lot more pressure than I used. He said he felt some popping in the area that shouldn't be there.

After the exam we discussed the possibilities. Yes, it could be osteosarcoma, it's the right area and Fudge is the right age. But, he thinks in this case it's either a torn ligament or a bone fracture. In either case we're treating it the same way. Due to Fudge's age, we're not considering surgery. Dr B thinks that splinting or casting the leg might cause more damage to the other side of the wrist. He gave Fudge an injection of Adequan and told me that he must be on leash at all times inside and out. His movements are to be severely restricted. Fudge is also taking the highest dose of Rimadyl that he can safely take. In two weeks we'll reassess the situation and he'll have another Adequan injection.

If Fudge shows improvement in two weeks time, we'll know we're on the right track. If there's no improvement, we'll do xrays to see what else may be going on. In either case, our goal is to keep him as comfortable as possible.

On Saturday when we got home, Fudge was tired and slept all day. On Sunday he was about the same. Then Sunday evening Rob and I both noticed that he looked a little more alert. On Monday it was obvious that Fudge was feeling better. He was eating better and was interested in what the others were doing. He also wanted to bounce when I took him outside. Bouncing is not allowed, but try telling him that.

Today Fudge's attitude is still continuing to improve. It's going to be hard to keep him quiet for two weeks and that's just the start. If this is a fracture or tear, it will be a lengthy recovery. How do I tell Fudge that his days of bouncing and running backwards are over. 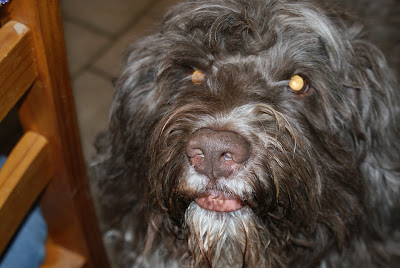 We could use some Power Of The Paw if you have some available. Fudge isn't out of the woods yet.
Posted by Sue at 3:47 PM

Poor Fudge...not to be able to bounce at will. We'll keep our paws crossed that it's just a ligament....'just a ligament', that's bad enough. We'll keep the boy in our thoughts and are sending POTP to him. Sometimes Dr Google is scary.

We are sending you lots of AireZen and POTP and crossing fingers and paws that you continue to improve, Fudge!

It is great to read that Fudge is doing better. We are sending prayers

Oh noes! Fudge, dude, I am so sorry that you won't be jumpin' and stuffs anymores...sigh. I feel your (mental) pain. I'm afraid Ma might limit my frolicking sometime soon too if the dogtor says so. I loves jumpin' just like you ~ Ma says I act like a puppy, just like you! What are we puppy-like (slightly older) doggies to do??! I am sendin' lots and lots of POTP and healin' vibes and AireZens your way!!!! Will a margarita help?? if you can't have it,, I'm sure your Moms will! BOL!
Okays, sendin' healin' vibes.....and {{{hugs}}}
Kisses,
Ruby ♥

Here's hoping it was just an injury from that bad all, Fudge. All paws crossed for you to be doing much better.

Oh, Mr. Fudge! Everyone's joyous inspiration to enjoy life, even if we can't spin! Take it easy, buddy, hang out with Mom; she's pretty cool. Love to you both and good healing thoughts from halfway across the country.

Hi Sue, we're really sorry to learn that Fudge has had some problems. We laser Sam for a number of things including arthritis. Here's a link to Sam's laser therapist's site. We were wondering if your Dr. B would have a someone down your way that could laser Fudge? https://www.efctherapeuticlaser.com/

Oh dear - sorry to hear that Fudge has had a rough time :(
But glad to hear that things have been looking up!
Sending lots of big licks and crossing my paws for a speedy recover..
- your new friend Morrie :)